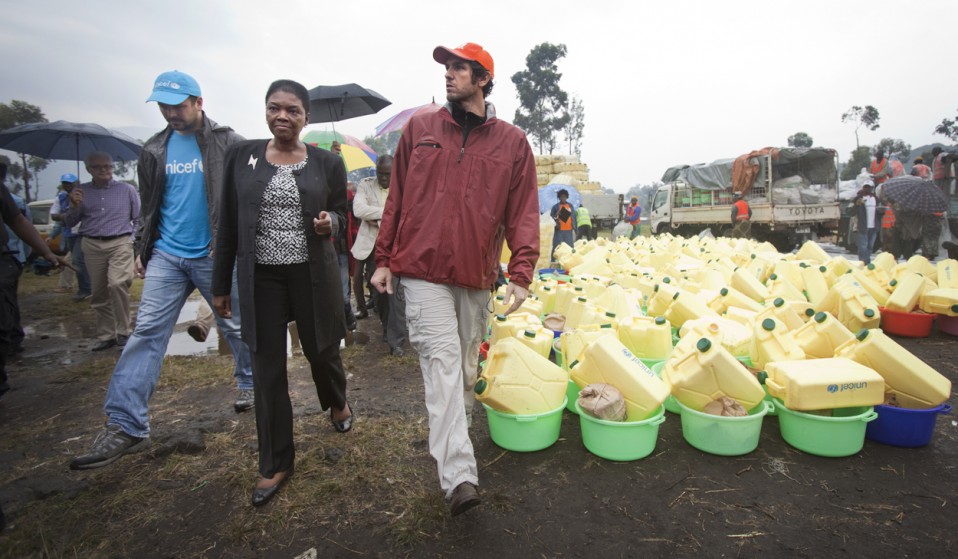 Former UN Under-Secretary-General for Humanitarian Affairs Baroness Valerie Amos speaks from experience about the need for long-term policies to address the refugee crisis.

Former UN Under-Secretary-General for Humanitarian Affairs Baroness Valerie Amos speaks from experience about the need for long-term policies to address the refugee crisis.

The scale of Europe’s refugee crisis exceeds anything seen since the Second World War, so there will be no easy solutions or quick fixes. But sensible policies and long-term thinking are needed to respond to the current situation and prevent further conflict and upheaval that could displace even more people from their homes.

Baroness Valerie Amos served as UN Under-Secretary-General for Humanitarian Affairs and Emergency Relief Coordinator for five years before stepping down in May, and is now the Director of SOAS University of London. Having worked in the centre of conflicts such as Syria, she has valuable experience tackling crises of this scale.

Baroness Amos says that over the last few years the world has seen a significant increase in the number of humanitarian crises, making the burden of their financial cost harder to bear. We also have a moral obligation to take on refugees, she says, especially in wealthy countries.

Huck asked Amos for some feasible solutions to the European refugee crisis.

In terms of the EU response to the crisis, how do you feel that they could agree on fair quotas for the intake of refugees?
I think the important thing is that it needs to be a comprehensive response. That means not just dealing with the terrible refugee issue but also the source of the problem, which is what is happening in the countries from which people are fleeing. It’s about welcoming refugees now, and sharing responsibility across the EU countries. Its about putting in place mechanisms to tackle trafficking – its an absolute scandal that people are making money on the back of peoples’ misery. It’s also about dealing with the conflict situations in the fled countries.

What sort of mechanisms could those be?
There’s very clear guidance on the treatment of refugees under the UNHCR Refugee Convention to member states and those who have signed up to the convention. One is being able to process people quickly and making sure they’re looked after. There are issues that have been raised about supporting neighbouring countries where the bulk of refugees actually end up, and in the case of Syrian refugees that’s Lebanon, Jordan, Turkey, Iraq.

The recent visit by Prime Minister David Cameron to some of those refugee camps I think points to the importance of giving that support. There’s also got to be a recognition that the majority of refugees actually don’t end up in camps at all. They end up living with people in the community. So it’s really important to support the host communities, especially schooling and work – when they cannot work they begin to feel extremely dependent.

In Syria there are big security implications, and in neighbouring countries and those further afield. It has an impact on ordinary people inside Syria, where the economic life of the country has been destroyed and people have been targeted. This is a conflict that needs to be resolved as quickly as possible, which will ultimately stem the flow of refugees. If you talk to refugees in other countries, they are waiting to go home. Clearly this mass exodus into the EU is part of a feeling that things are now so out of control and there is no prospect of a solution.

The UN and its partners have a very clear plan for the numbers of people they think will be able to help and the resources that are needed. One of the big challenges is that there are now so many humanitarian crises around the world that actually getting the resources required is becoming more and more difficult. The number in terms of responding to the Syrian crisis is around $1.3 billion – and that’s just responding to one crisis. If you think of Yemen, Iraq, South Sudan and the Democratic Republic of the Congo, you see that the numbers are just spiralling up and up and up.

In terms of the refugees that have come into Europe, is there a moral obligation to take them in, or do you have to balance that against the rational?
My own view is that we have seen major refugee movements across the world before, and that it has been really important to recognise that people are fleeing conflict, violence and brutality. We need to welcome them. I do think that we have a moral obligation as countries which are wealthy. We have seen and welcomed people fleeing persecution before and should continue to do that.

How do you feel about the low UK intake pledge for refugees as compared to countries such as Germany?
I do hope that all EU countries, including our own UK, will do more. This is a major crisis and we all have to pull together.

What do you make of the distinction made between economic migrants and refugees?
I think that mislabelling refugees as economic migrants has created a huge amount of confusion. Obviously countries have policies put in place to manage migration into their countries – that’s one set of issues. I think it’s very different when we’re speaking about refugees and asylum seekers, and the persecution that they are fleeing.

In terms of solutions among ordinary people, does it restore hopes when you see initiatives such as Refugees Welcome?
The marches that we saw over the weekend, for example, the outpouring of support is very important. Our government needs to know that people are appalled by some of this. I also recognise that there are people who feel that, given the economic crisis in so many countries across the EU, their governments need to stem the flow of refugees. The political leadership in all of our countries must make the case as to why people are fleeing persecution. I hope that governments will listen to these people.

Linkedin
RELATED ARTICLES
OTHER ARTICLES
Photojournalist Fiora Garenzi spoke with people still living in Eastern Ukraine, an area which seen some of the heaviest fighting since the war began.
Photographer Bud Glick recounts documenting everyday life in the area, and what it taught him about the Chinese immigrant experience.
From the chip shops, to the bingo parlors and burlesque dancers, photographer Mike Coles remembers capturing scenes of holidaymakers by the English coast.
As the Criminal Bar Association enters its fifth week of action, criminal barrister Russel Fraser explains why the legal professionals have walked out and how action is likely to escalate.
To mark the premiere of his new documentary on surfing giant Gerry Lopez, the filmmaker and former pro skateboarder sits down to share his unique brand of wisdom.
The government’s brutal crackdown on NGOs has left victims of rape without anywhere to seek help. And now, as the country plays a key role is Russia’s war, things are only getting worse.