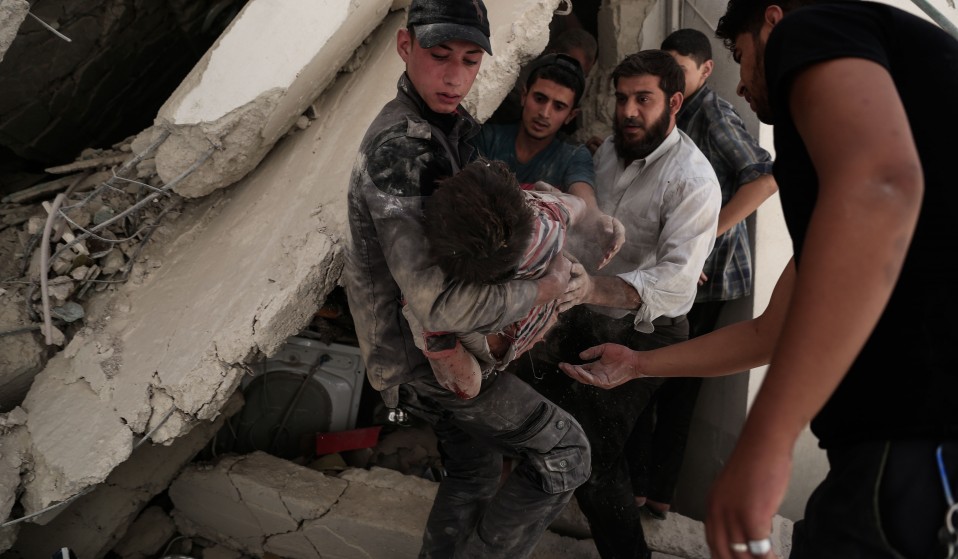 Syrian Civil Defence volunteer Mahmood Adam reflects on his work as a White Helmet and on rescuing civilians after the Douma massacre, one of the deadliest attacks of the war.

Also known as The White Helmets, the Syrian Civil Defence is an unarmed, volunteer organisation which helps anyone in need - regardless of their religion or politics - in areas where public services no longer function. They have saved 60,000 lives across Syria and were recognised for their heroic work with a nomination for the 2016 Nobel Peace Prize.

Syrian Civil Defence volunteer Mahmood Adam reflects on his work as a White Helmet and on rescuing civilians after the Douma massacre, one of the deadliest attacks of the war.

My name is Mahmood but I go by Siraj. I am 29-years-old and I was born in Douma, a suburb of Damascus, Syria.

I was just 24 when the demonstrations against the Assad regime began in my neighbourhood. They started in early 2011, and I instantly joined the people to call for our democratic, human rights to be respected. One of the main slogans we used was: “The people want to develop the youth.” As the world saw on the news, we were harshly crushed by the Syrian government. They responded to our chanting with live ammunition, thousands were killed in the first few months alone.

A new era began in Syria – a violent one. The regime’s troops attacked the people. The news was only about death, detention, torture, migration and starvation. I saw the volunteers of the Syrian Civil Defence working heroically to save civilians in the aftermath of airstrikes, barrel bomb attacks and artillery strikes. Before the revolution, I was working in a private company as a technical designer, but at that point I decided to join them – I wanted to become a White Helmet. I wanted to be part of the humanitarian mission to save people from under the rubble, rescuing the injured and extinguishing fires. 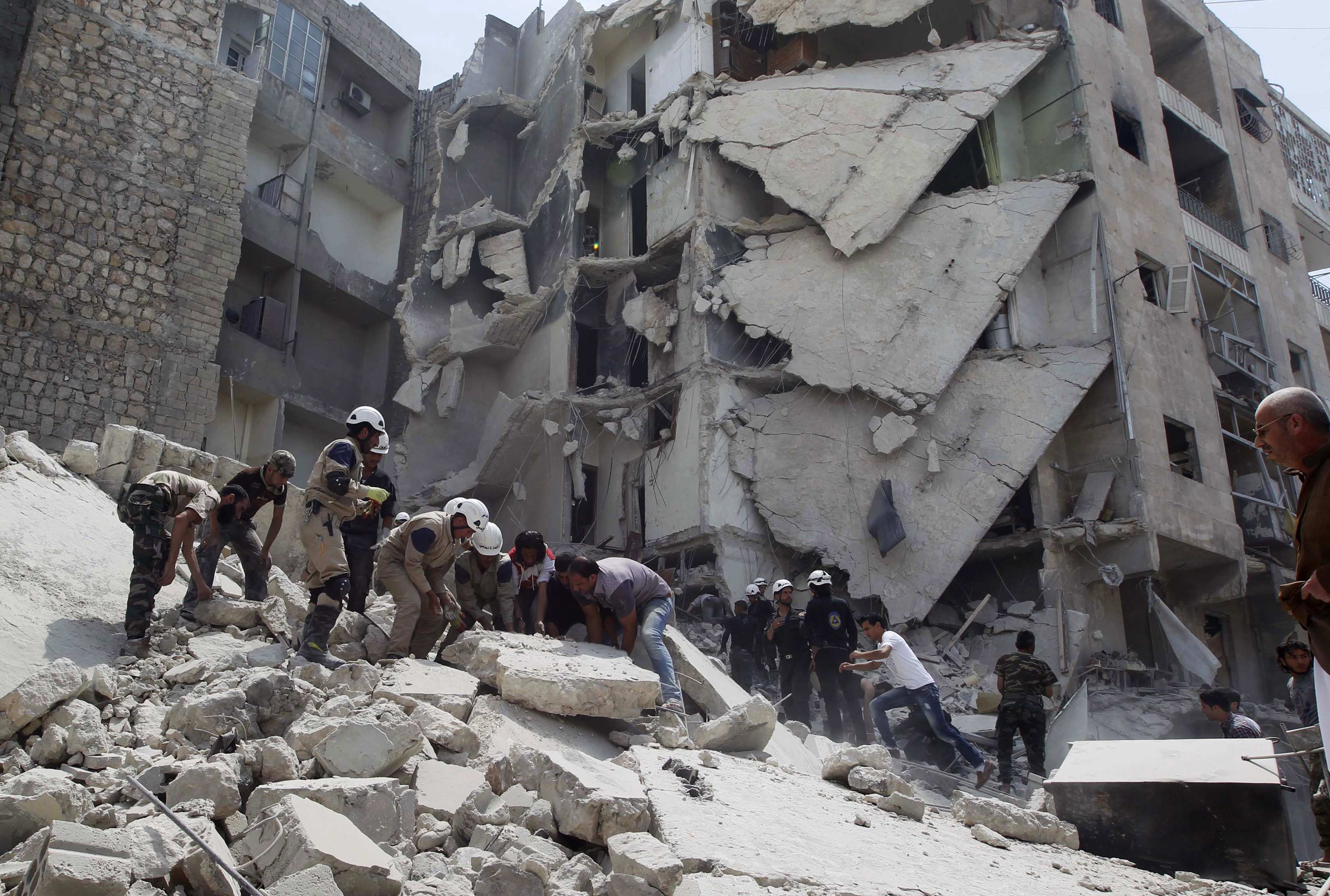 Duoma is now a rebel-held area, and has been totally under siege by the regime since mid-2014. Over time, the scale of the attacks by Assad’s forces and his Russian allies on innocent people have increased. Any Syrian is a target as long as he or she lives in an area that revolted against him. He or she is considered a military target.

For me, the scariest moments are when residential areas or public buildings like schools, crowded markets or hospitals are attacked. We have to work day and night to rescue people. On many occasions my team was unable to cover the amount of destruction from one day of attacks without additional help. We have to reach out to nearby White Helmets centres to provide support and send rescue workers. 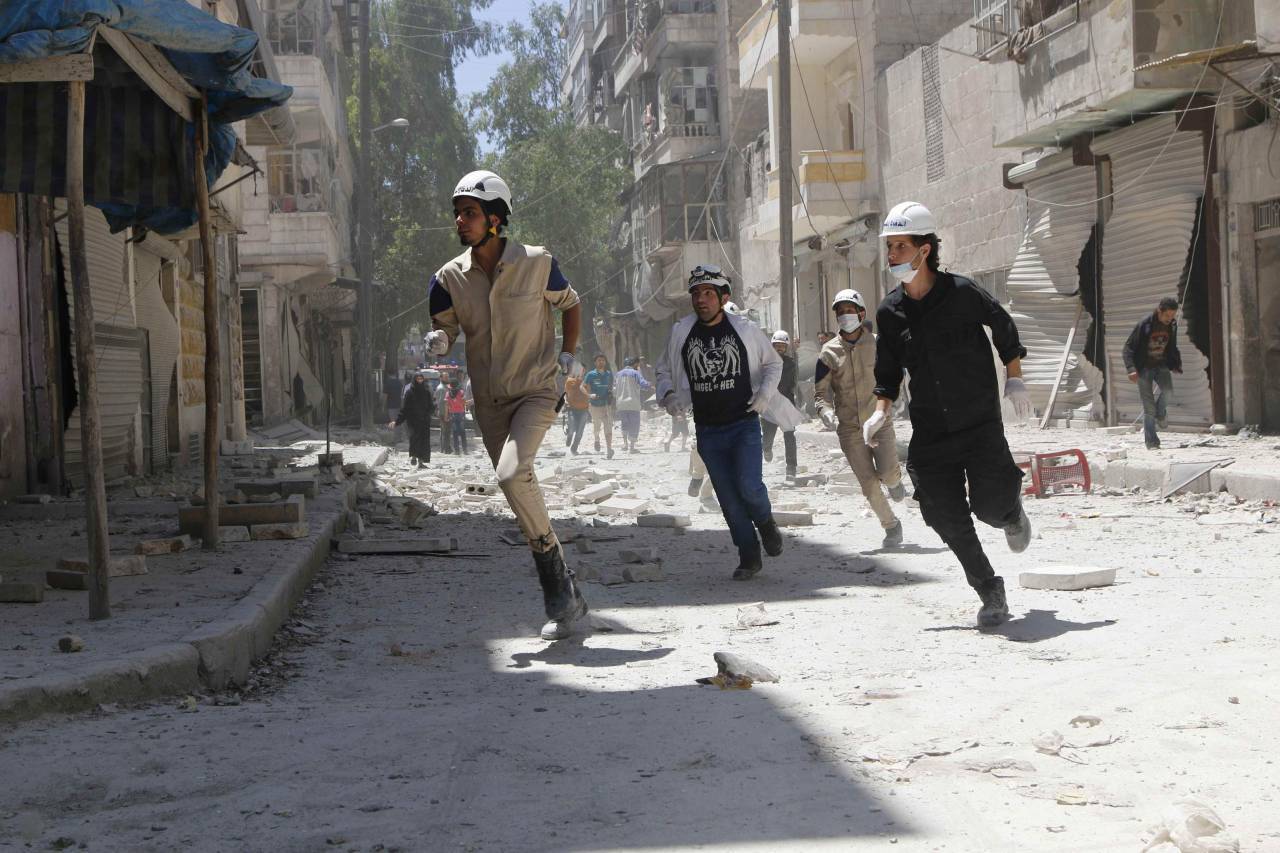 I recall a day in August 2015, when 125 people died after a crazy attack on the local market. It is a day none of the White Helmets in Douma will forget and one of the bloodiest attacks on civilians throughout the war.

That day we were in the Syrian Civil Defence centre when we heard the attack. We went up to the roof and were able to see exactly where it happened because of the smoke rising from the marketplace. We don’t have any equipment which tells us anything, we rely solely on our instincts and our experience. We have been doing this so long that we know – as if we are machines.

We drove as fast as we could to the site of the attack. I really can’t describe my first impressions… You could not imagine the scene. Fruits, vegetables and people were scattered everywhere. I remember just walking and could not understand what was going on. I froze because I couldn’t take it all in. I remember thinking, ‘Is this possible? Am I here or not here? Am I dreaming?’ I had moments later where I froze again, but they didn’t last long, only because I knew I had things to do. 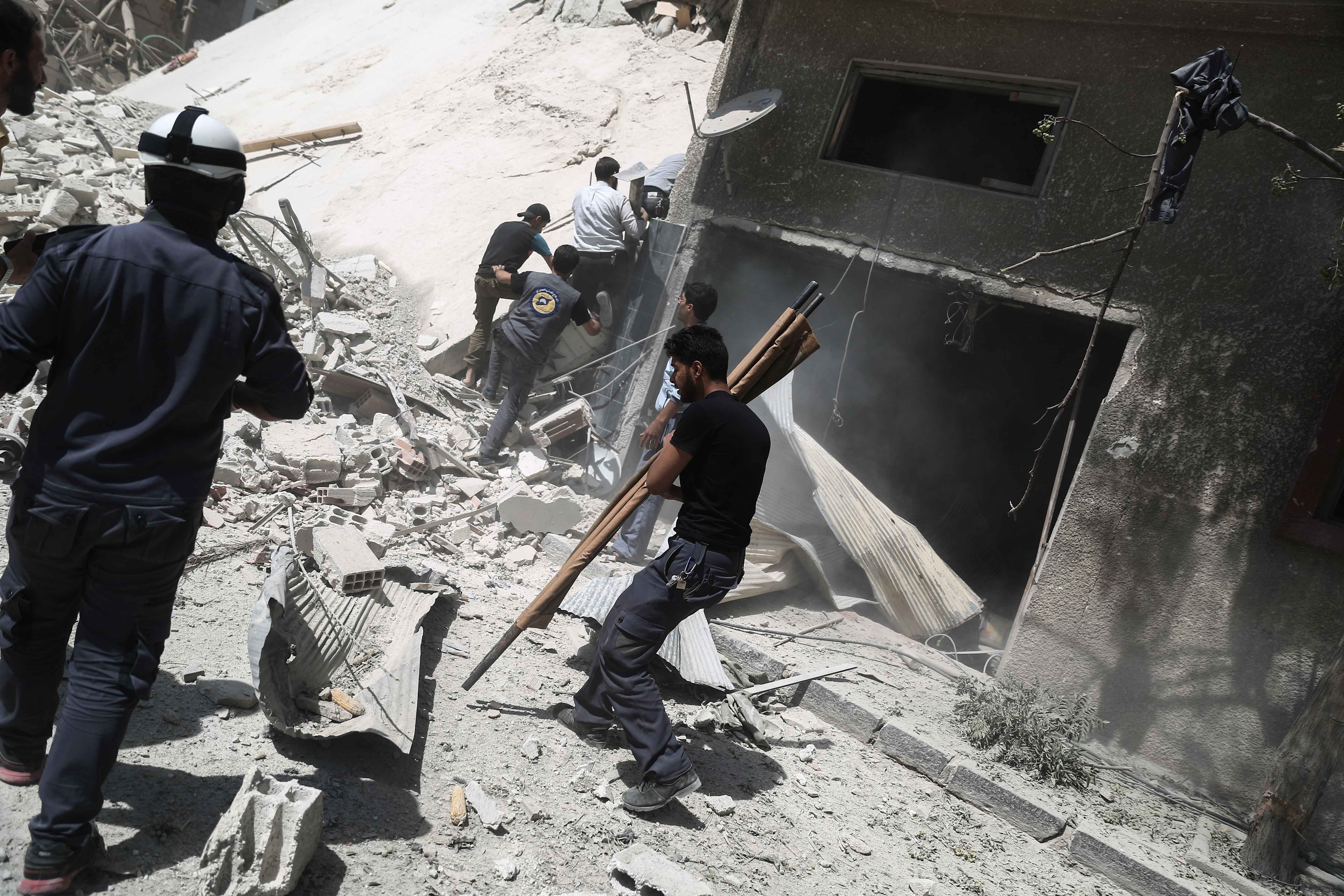 The numbers of casualties were huge. Can you imagine, the first car alone carried 32 dead bodies. There were so many different types of injuries. Everybody in the area joined the White Helmets in trying to save lives. Everybody who could help was pulling bodies from the rubble or transporting injured people. Every available car was working as an ambulance.

It’s hard to prioritise in such extreme situations, but the women and children always come first – we carry them to the medical points. Sometimes when you’re pulling somebody out of the rubble, you realise they’re dead and you have to leave them to go to another person you can help, before you come back for the dead. These decisions take their toll on you.

Our biggest challenge is getting rid of the rubble, but our resources are very limited. We don’t have any heavy equipment or vehicles with anything that could help us drag the away rubble or the bodies. We save children and civilians from destroyed buildings using only hammers and our bare hands – nothing fancy, no heavy machinery or advanced equipment. We have been pleading with aid organisations to help us, but our area is besieged by the regime and nobody can provide anything for us.

There were four airstrikes that day. The shelling continued from 9am until 4pm but we stayed until 9.30pm, when the last people were rescued or carried to the cemetery. 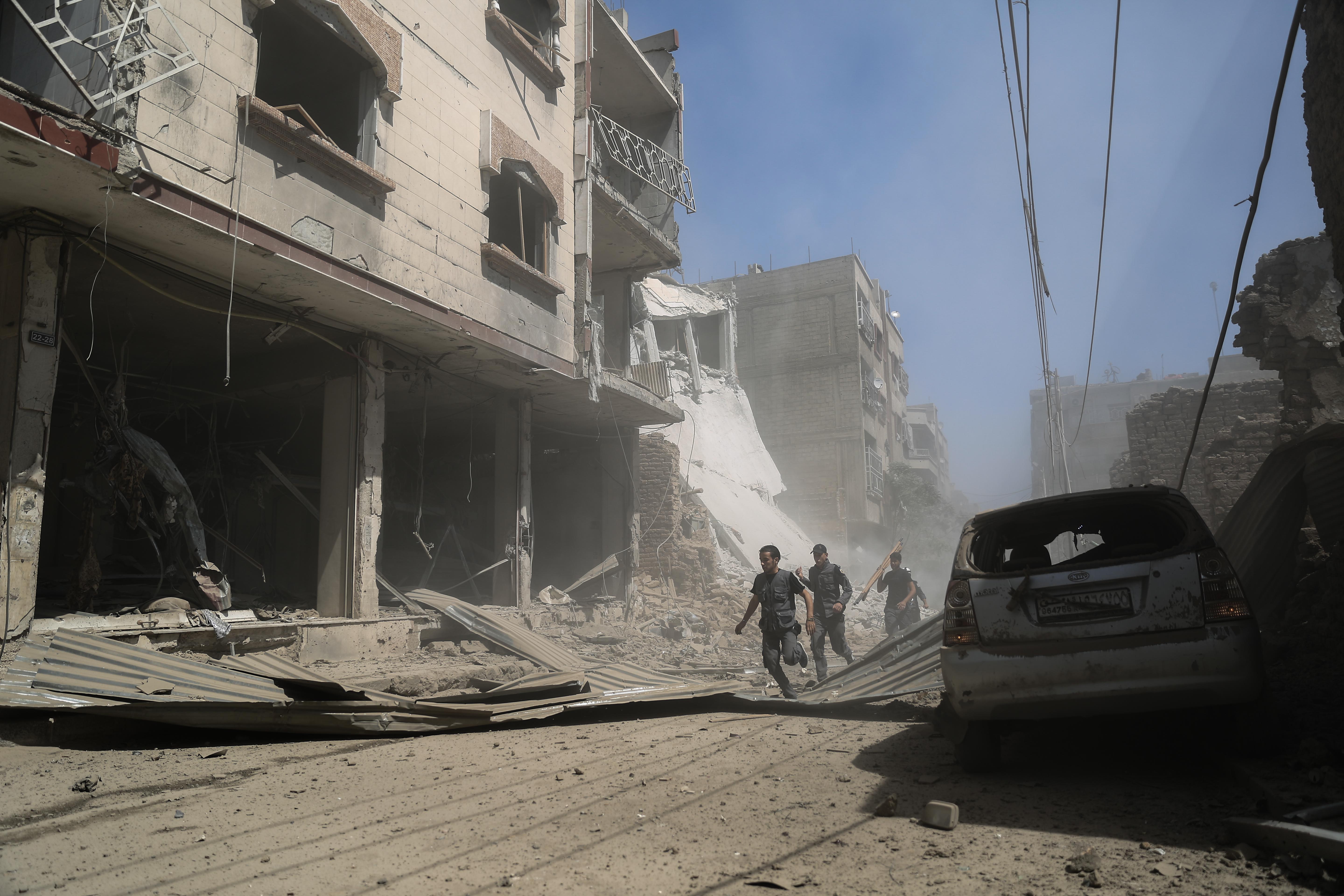 The White Helmets do not belong to any armed faction or any other party, we are an independent body operating neutrality in all besieged areas across Syria. Each White Helmet volunteer handles a strike as if it had hit his own home, as if it had hit his own family. Every volunteer is always ready and prepared to help anyone who needs us. There are are no differences between humans when they need help.

Some people say that the only targets of the airstrikes are armed groups. But as a White Helmet I can tell you, this is not true. Every person we manage to save from the destruction caused by an airstrike is a civilian. 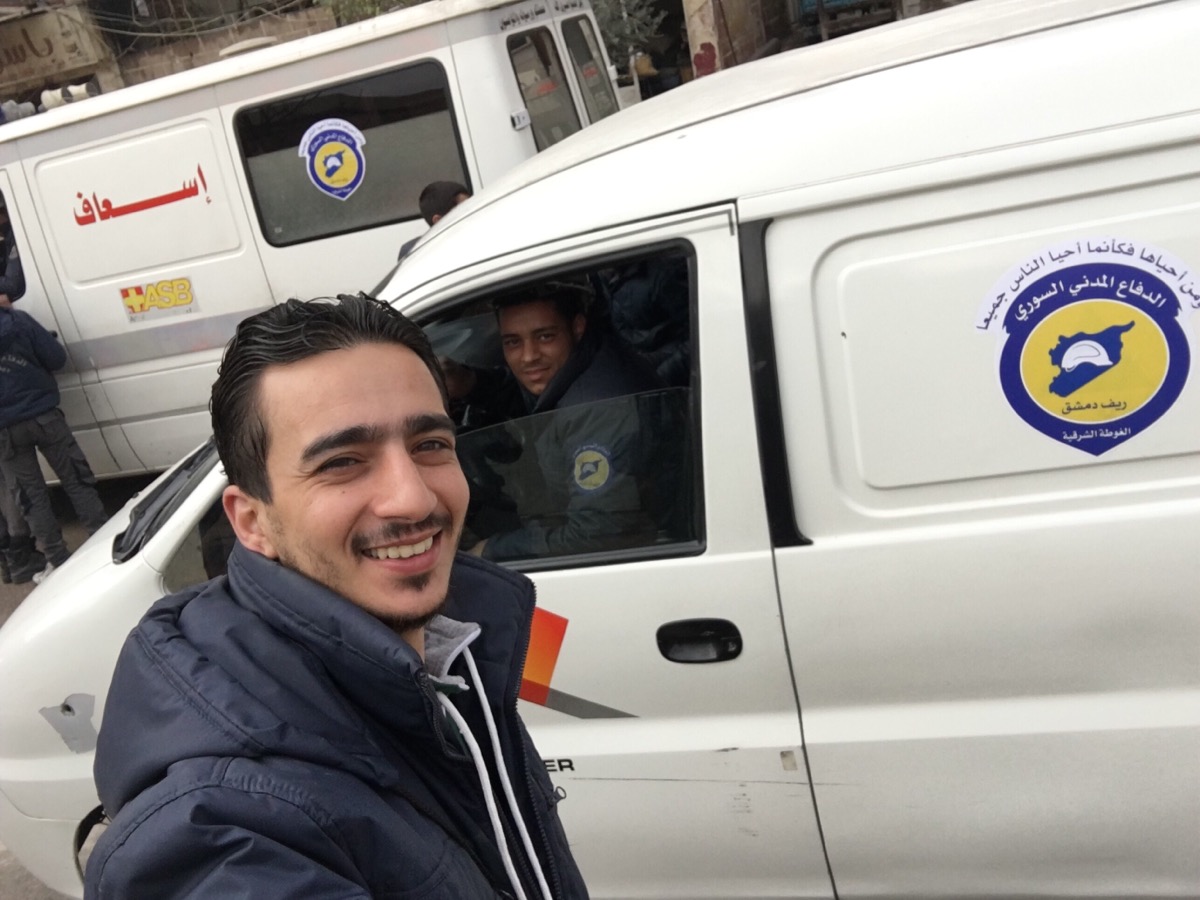 Mahmood in front of a Syrian Civil Defence vehicle

I can’t talk about myself as an individual anymore, I see myself as part of a team: the White Helmets. My sense of purpose comes from my work with this group of Syrian Civil Defence volunteers. When you love a certain job, whatever it may be, it motivates you and makes you want to improve yourself to be the best you can be. We are working for a humanitarian cause, surrounded by young active friends who, like us, are there to help children, women and the elderly. We are surrounded by people who are ready to sacrifice what is left of their lives to help others. For the White Helmets, every day is a new life.

Find out more about the The White Helmets and The Syria Campaign, who support their work.

Documentary The White Helmets is out September 16 on Netflix.

Linkedin
RELATED ARTICLES
OTHER ARTICLES
Theo McInnes’s photos of the annual event provide an intriguing snapshot of contemporary Britain.
Activists and campaigners are fighting back against new laws that would seriously undermine the ability to take industrial action, calling it an attack on fundamental workers' rights.
Following the release of his debut single, Deyaz talks battling addiction, dealing with his struggles through music, and building a budding music career from his living room.
After building his reputation covering the US civil rights movement in the 1960s, the photographer went on to produce some of the most enduring images of the past century.
A new film from Berghaus traces the story of Adam Raja, who left behind a turbulent upbringing to discover the healing power of climbing.
As she gears up for the release of her first book, the 24-year-old climate activist talks standing up to authority and building a more inclusive movement.