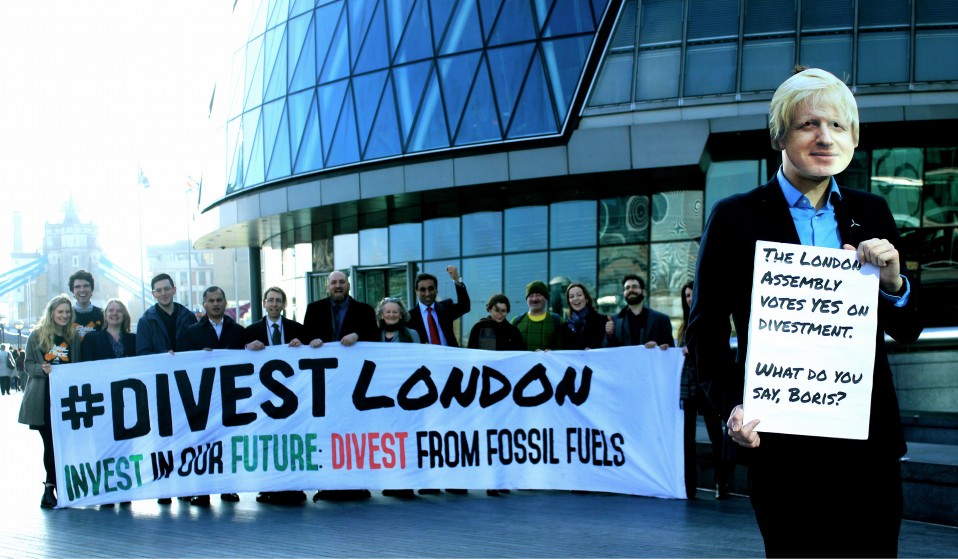 As the London Assembly made a historic vote to divest from fossil fuels, here’s what you need to know about the global divestment movement.

As the London Assembly made a historic vote to divest from fossil fuels, here’s what you need to know about the global divestment movement.

London has become the biggest city so far to join a growing movement of organisations that are abandoning investments in fossil fuels, after Oslo became the first capital to divest this year. The London Assembly voted on Wednesday, March 11, to support divestment and call on the London Pensions Fund Authority to remove fossil fuel investments from its £4.9bn portfolio over the next five years. Today’s decision could easily be blocked by mayor Boris Johnson but it represents an important victory after months of tireless campaigning by Divest London and other activist groups.

But what is the fossil fuel divestment movement? Simply, divestment means getting rid of investments held by pension funds, university endowments and sovereign wealth funds, etc. in a given industry and the tactic has been previously used successfully against big tobacco, apartheid in South Africa, armaments, gambling and pornography.

After researchers from UCL revealed that the majority of hydrocarbon reserves must remain buried if we are to avoid catastrophic climate change, putting brakes on the fossil fuel industry has never been more important. Fossil fuel divestment limits the industry’s ability to raise new fund for extraction projects, causes reputational damage and will hopefully provoke a wider cultural shift towards investment in renewables.

In just two years, the fossil fuel divestment movement has become the fastest growing divestment campaign in history and has so far moved funds estimated at over $50 billion.

Here are five things you should know about fossil fuel divestment – and how you can get involved.

1. If we want to stop climate change, we have to stop paying for it.

You’re probably investing in fossil fuels – even if you didn’t know it. Few people invest directly, but if you have money held in a bank, investment or pension fund it’s likely that some of that money will be invested in the fossil fuel industry. University endowments, sovereign wealth funds (Norway’s sovereign wealth fund, the largest of its kind in the world, divested in 2015 but others are yet to follow suit), and similar funds are other ways that people can be drawn unawares into support for the fossil fuel industry.

In the words of Desmond Tutu: “Nobody should profit from the rising temperatures, seas and human suffering caused by the burning of fossil fuels… Reducing our carbon footprint is not just a technical scientific necessity; it has also emerged as the human rights challenge of our time.”

2. Divestment has worked before

Time is running out to halt climate change before we cross a threshold which scientists predict could trigger catastrophic disruptions. After the failure of the Copenhagen Climate Summit in 2009, creating a powerful movement to push for real change at the United Nations Climate Change Conference in Paris in September 2015 has never been more important.

4. The industry is running scared

The fossil fuel industry has identified the divestment movement as the biggest threat to business as usual. In just two years, cities, universities, sovereign wealth funds and other organisations in control of an estimated $50 billion of capital have rejected fossil fuels and chosen instead to channel their investment into renewables and clean energy. Ahead of Global Divestment Day in February 2015, the industry produced this laughable video to try to counter the wave of negative PR.

5. How can you get involved?

As almost everybody is indirectly linked to funding the fossil fuel industry, getting involved in divestment is easy. You can pressure your bank, pension fund, university or any other organisation you have a relationship with that holds investment funds to divest from fossil fuels. Fossil Free are a driving force behind the global divestment movement and they have information on joining a divestment group near you, starting your own and a tool which allows you to check your own investments for links to the fossil fuel industry.

Find out more about the global divestment movement at Fossil Free.

Linkedin
RELATED ARTICLES
OTHER ARTICLES
Huck’s search for an indie culture manifesto continues. After you’ve made that first jump into the unknown, where do you go next? The Survival Issue asks how to fight against the odds to move forward and keep the show on the road.
Hundreds gather at City Hall to pressure Boris Johnson and the Greater London Authority to break financial ties with polluting fossil fuel companies.
Huck hit the streets of London with protestors calling on world leaders to protect the environment.