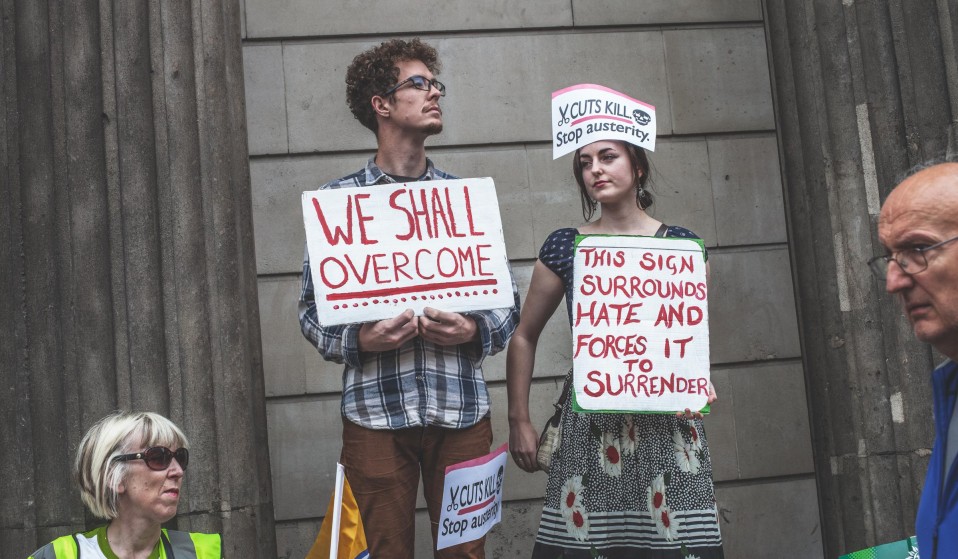 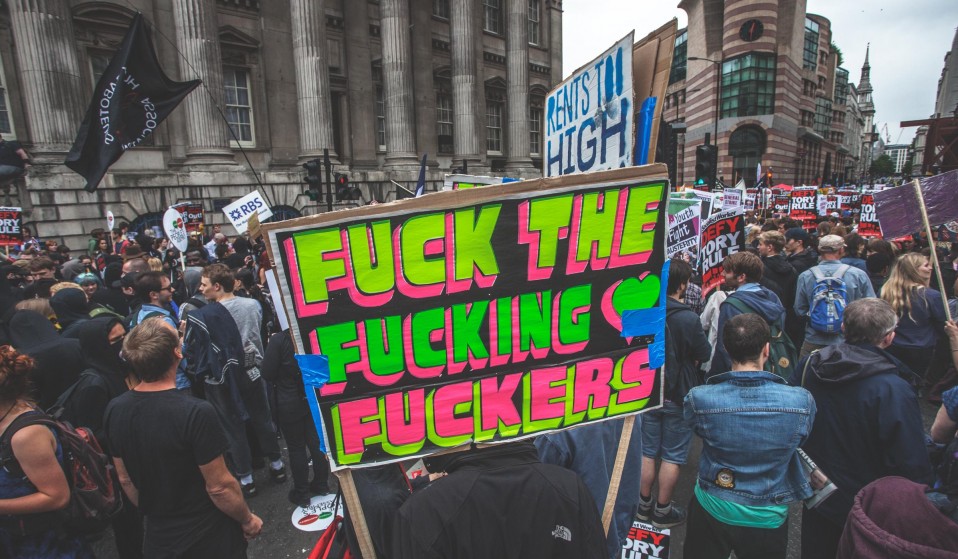 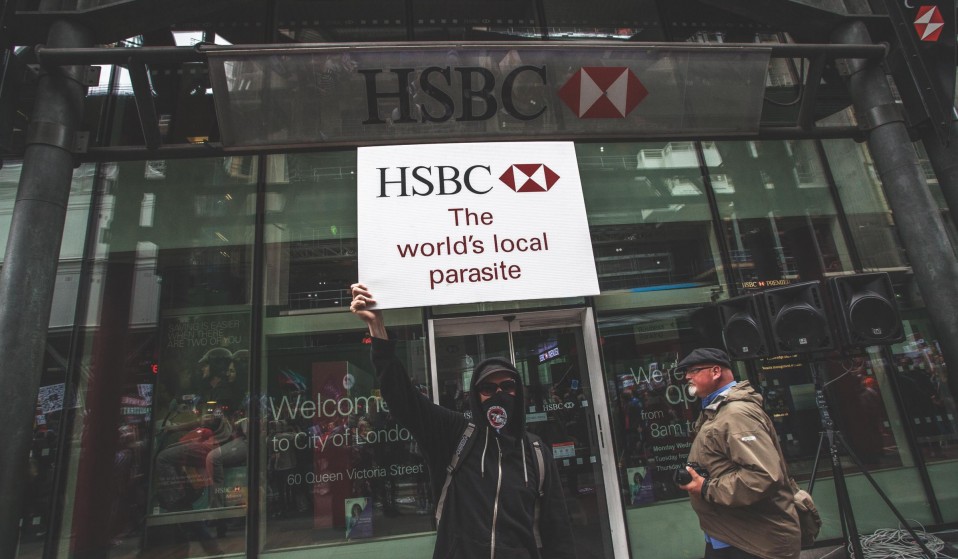 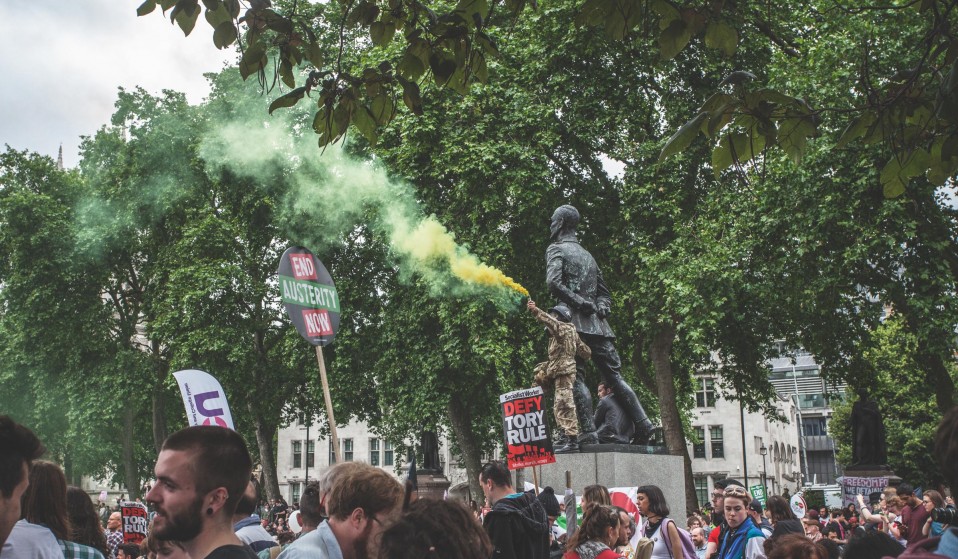 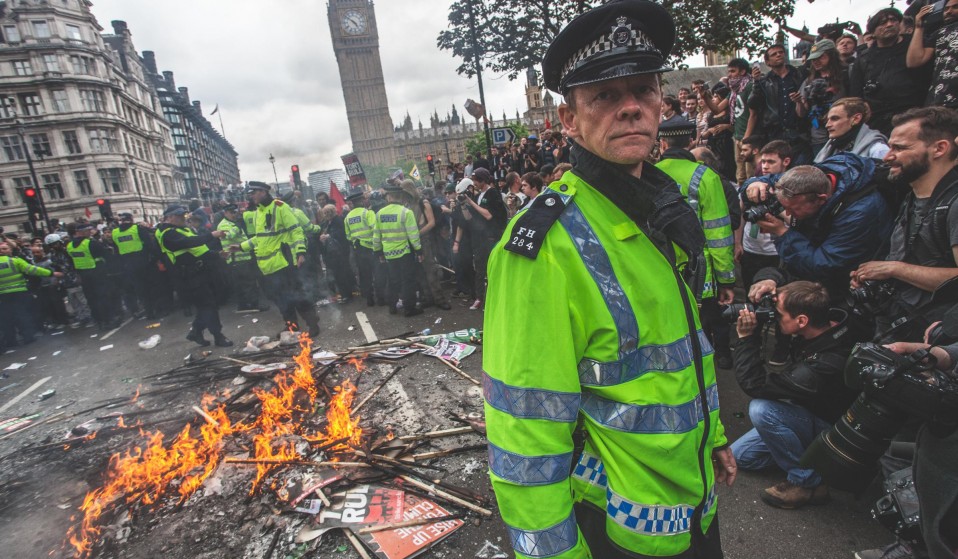 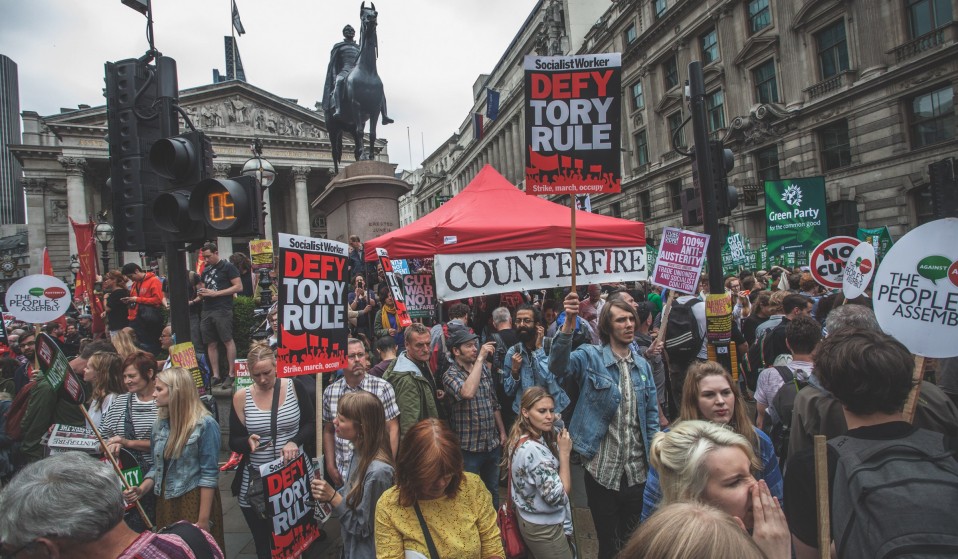 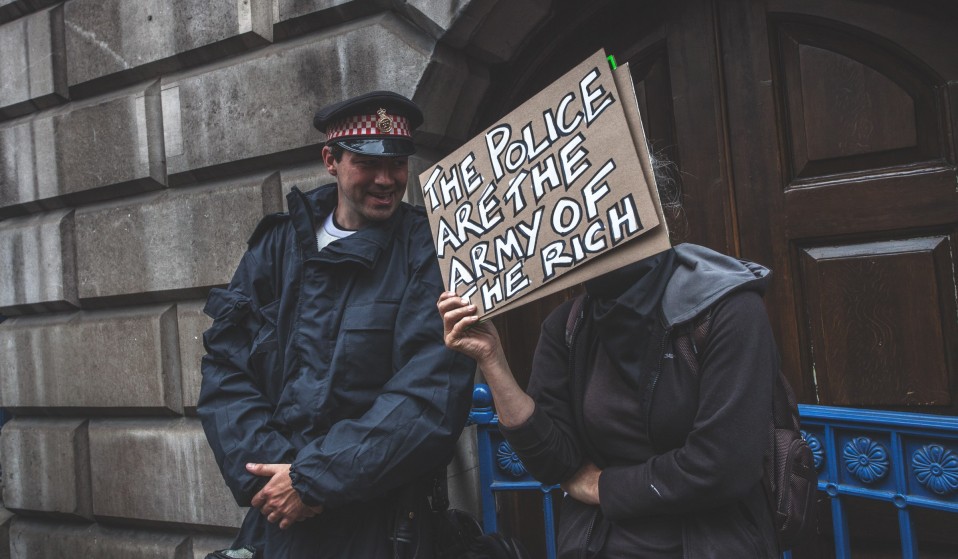 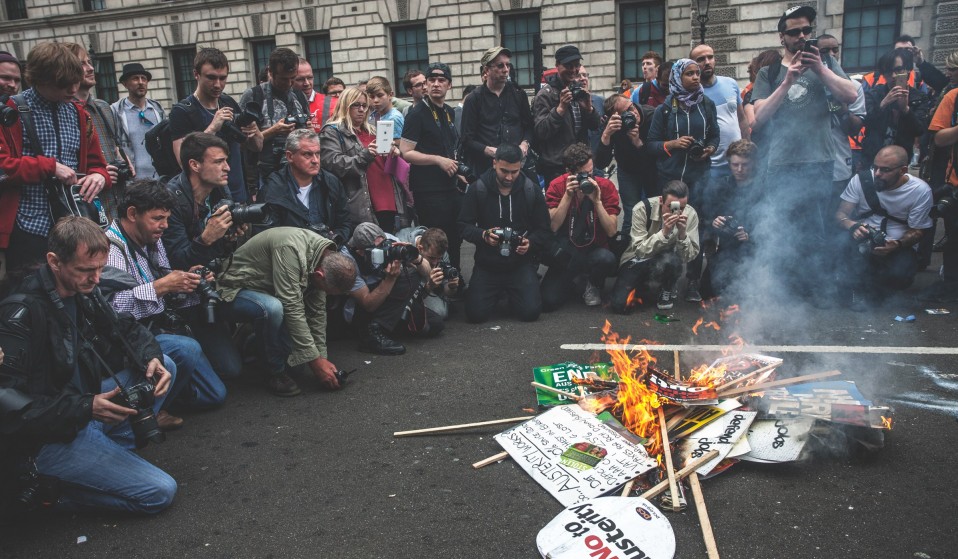 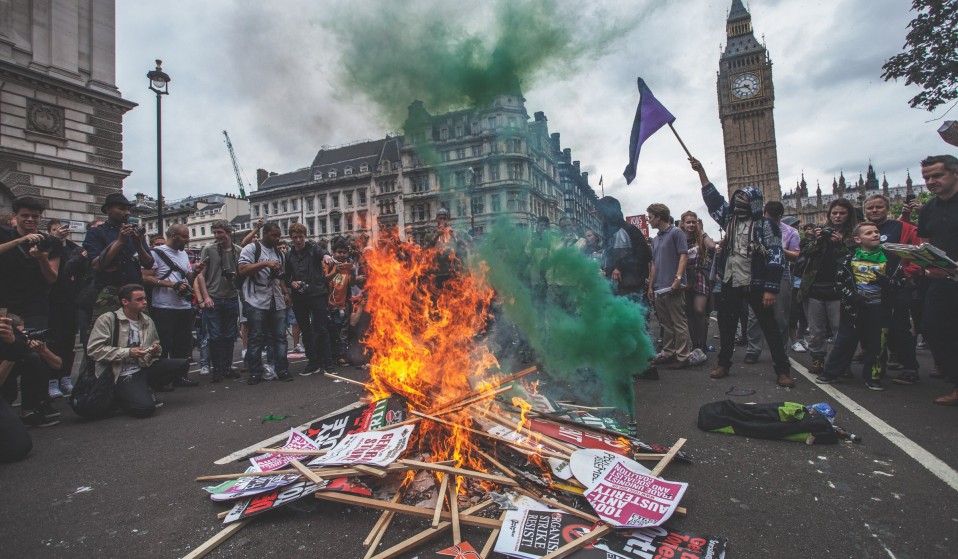 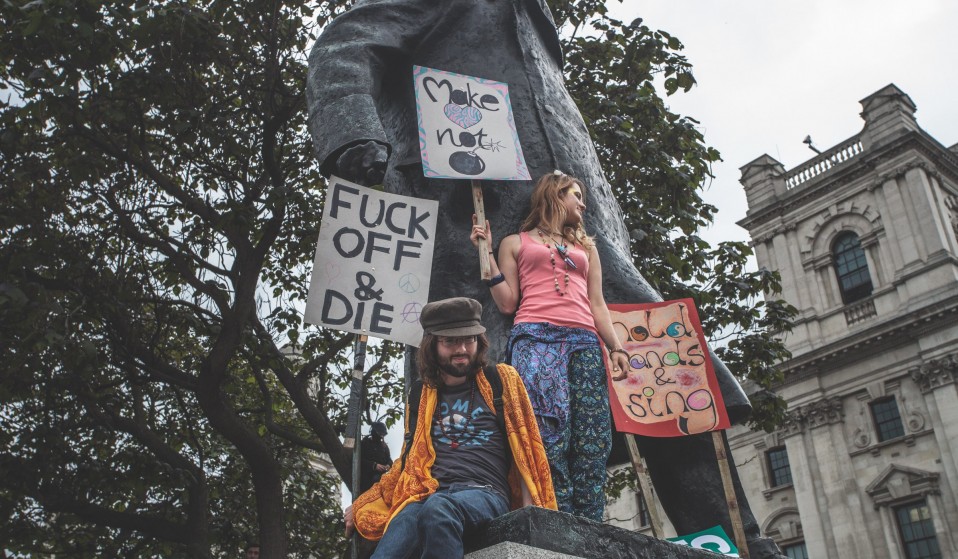 From Athens to Andalucia, growing numbers of Europeans are taking a stand against austerity. Here’s what we learned from the hundreds of thousands who took to the streets on Saturday to protest the new UK government’s policy of cuts and privatisations.

From Athens to Andalucia, growing numbers of Europeans are taking a stand against austerity. Here’s what we learned from the hundreds of thousands who took to the streets on Saturday to protest the new UK government’s policy of cuts and privatisations.

“It’s a very basic thing that we’re protesting. We need to start thinking about people, not companies. It’s a basic gesture against neoliberalism, in its simplest form,” said Christian, 23, a student at the demonstration on Saturday 20 June.

This sentiment was echoed among participants young and old. A distinct feeling of unfairness reigned – It’s unfair that people struggle to feed themselves while companies continue to avoid tax (Dan, 32), unfair that the Tories have one rule for them and one rule for the rest of us (Susan, 63), unfair that money is pouring out of public services and into shareholders’ pockets (Carrie, 25).

While the government maintains that austerity is necessary to cut the country’s deficit and George Osborne plans another £25 billion of cuts – including a £12 billion cutback on social security – the people have taken a stand and made their voice heard.

Tens of thousands marched from the Bank of England to Parliament Square to protest the proposed cuts and other controversial policies, such as TTIP, health service privatisation and the cut price sell-off of bailed out banks. Here are some of the things that came out of Saturday’s demonstration, and the action that lies ahead.

The People’s Assembly, which organised the demonstration, estimated that up to 250,000 people from all over the country attended the march in what was anticipated to be the biggest anti-austerity protest of the year. Though according to the BBC, “the Met Police have not estimated how many people were there,” this wildly eclipses the original expectation of around 70,000 participants. Among the attendees were many familiar faces, including Russell Brand, Owen Jones, Charlotte Church, Green MP Caroline Lucas and aspiring Labour leader Jeremy Corbyn.

Austerity affects all sections of society

A remarkable element of the demonstration was the diversity of the participants and of the issues represented. Ranging across age, gender, nationality and background, the demonstrators that turned up were many and varied.

Although austerity was the main focus of the demo, a huge number of groups attended the protest, campaigning for different issues – a testament to the reach of austerity measures into all sectors of society. Issues raised included fracking, immigration policies, student fees, welfare cuts, homelessness, the NHS and trident.

Democracy is not a one day event

Despite the taunts and sneers flung at protesters and political activists, it’s ludicrous to suggest that because the Conservatives were “voted in” (by just a quarter of eligible voters, but let’s not digress), the next five years are to be spent in meek silence. Democracy isn’t a one-day event where people turn up to vote and let the experts decide from then on. A fundamental aspect of democracy is that politicians are held to account and challenged, and the people have a right to voice their concerns – a right they exercised in great numbers on Saturday.

Peaceful protest is the word of the day

The extensive presence of the Metropolitan Police suggested a revolt was about to break out, but the event was all but entirely peaceful. A handful of bonfires were made with placards and some smoke bombs were set off, but there have been no reports yet of any serious violence. This bodes well for the legitimacy of the movement.  Meanwhile, there were reports of a Metropolitan Police crackdown on activists previously linked to direct action protests ahead of the demonstration.

Although the demonstration was in many ways a success it’s not the end of the road. Many of those who spoke at the rally in Parliament Square emphasised the need to push forward the momentum that has been reached rather than let it stagnate and disperse. Concrete action needs to be taken, opposition needs to be organised and the political effort directed if any real change is to be achieved. It’s to be seen if the People’s Assembly can organise the factions as well in the future as it did in this demo.

Linkedin
RELATED ARTICLES
OTHER ARTICLES
Over the weekend, the United Families & Friends Campaign organised a protest calling for an end to deaths at the hands of the police.
A centuries-old tradition is offering families a way to honour the deceased, reports Arbab Ali.
A new photo series documents tribes preserving the environment through simple, sustainable practices in central Asia.
Following the release of their third album, the duo talk collaboration, family and connecting with the dead.
A campaign led by ex-torture survivors and refugee organisations has left the Tories with no planes left to carry out their callous scheme.
Photographer Ira Lapu documents the lives of ordinary Ukrainians living amid a brutal conflict.