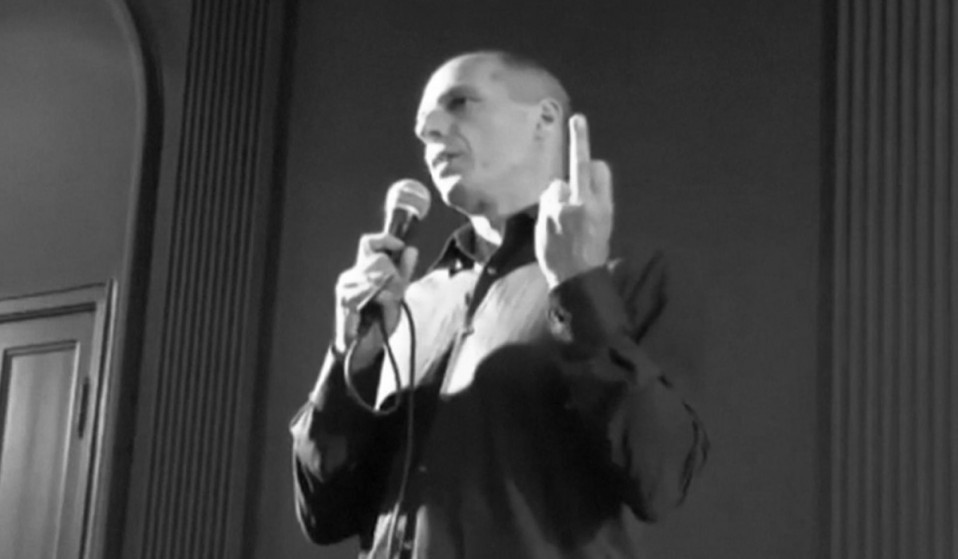 Former Greek finance minister Yanis Varoufakis learned about austerity the hard way. Now he has some disruptive advice for Jeremy Corbyn and progressives across Europe.

Former Greek finance minister Yanis Varoufakis learned about austerity the hard way. Now he has some disruptive advice for Jeremy Corbyn and progressives across Europe.

Economists rarely achieve celebrity status, but Europe’s only exception to that rule is Yanis Varoufakis.

The former Syriza MP and Greek finance minister stared down the IMF, European Central Bank and European Commission (affectionately known as “the Troika”) and refused to accept another round of crippling austerity for his country. He dared to point out the flawed logic underpinning the Troika’s approach to Greece’s economic crisis – and rocked an infamously jazzy shirt to parliament when he was threatened with treason charges for doing so.

Quite simply, he’s a baddass – by economists’ standards, at least. His role in the Greek crisis and his searing critique of neoliberal capitalism The Global Minotaur have turned him into a progressive icon.

On a rainy Monday afternoon in Central London, as newly elected, anti-austerity leader of the opposition Jeremy Corbyn took his seat in the House of Parliament for the first time, Varoufakis spoke to a packed meeting organised by the People’s Assembly Against Austerity. Here are the five biggest lessons we took away from his talk.

“Austerity doesn’t work. The only difference [with Greece] is that in Britain the ruling class knows it. It doesn’t apply [austerity], but utilises the narrative of shrinking the state and of austerity in order to affect a massive transfer of income from the have-nots to the haves. It’s about making sure that the costs of the financial crisis are transferred on to the shoulders of those who didn’t cause it and those who can ill afford to hold that particular burden on their shoulders.”

Socialism for the rich

“When it comes to the spivs and the bankers we have socialism, with the socialisation of their losses. And you have the state, which is extremely activist in pursuing their objectives. So it’s socialism for spivs and the bankers. And we have the unfettered market, the Roman arena, into which we throw the weaker – those who need protection, working men and women – to be devoured by the lions of the free market.”

“In 1991 socialism collapsed in the socialist camp and the left worldwide suffered a major defeat, both politically and morally. We’re culpable for that, but that’s another story. In 2008, capitalism died. I describe the new system we’re living in as bankruptocracy: the rule by bankrupt banks, that have the political power to affect the constant tsunami of money coming from the financial sector and from working people into the bankrupt banks. They remain bankrupt even though they are profitable, because the black holes created during the years of ponzi growth prior to 2008 remain.”

“If you are a sixteen-year-old in Mumbai, if you are a young person in Manchester or in South London, who’s not particularly interested in politics, who will not come to meetings like this, what you probably look up to is Silicon Valley. Your dream is to create an app, a killer app, that will make you a millionaire, or a billionaire. Until the labour movement and the left manages to inspire these people who don’t care about us. People who don’t care about collective action and for whom progressive politics means embracing the decentralising power of technology, of information technology, of the internet – which talk to the anarchistic streak in them. Unless we manage to form an alliance with them, to embrace disruptive technologies, we will fail.”

Lessons for Corbyn from Greece

“Your opponents are going to use fear as their main instrument. They will scare people off. They will say to you that the Corbyn government is going to see the pound devalued, is going to push interest rates up, is going to create a national security issue, and so on. This is what the establishment media will drum into people’s heads, inside their living rooms, from their iPods, or what have you. Don’t fear that fear. People out there are perfectly capable of setting aside the propaganda if our leadership shuns hypocrisy, avoids spinning and continues to speak truth to power by bypassing the systemic media. We tried this in Greece and it worked. The people can overcome fear if the leaders overcome fear.”

Linkedin
RELATED ARTICLES
OTHER ARTICLES
With inflation now at a 40-year-high of 9 per cent, demonstrations organised by TUC took place to demand action from the government.
Freddie Miller’s new series of photographs investigates who today’s trainspotters are and what drives their unfettered enthusiasm.
Finland-born photographer Sirkka-Liisa Konttinen looks back on her decades-long documentation of life in Northern England.
In the latest instalment of Photographers in Conversation, the chronicler of raves, protests and beyond explains why he’s drawn to such specifically visceral environments.
Photographer David Hoffman recalls documenting the extreme wealth inequality around Tower Hamlets and Hackney int the 1980s.
Whether it's partygate, the climate crisis or the spiralling cost of living, the fightback begins on the picket lines writes Tommy Vickerstaff