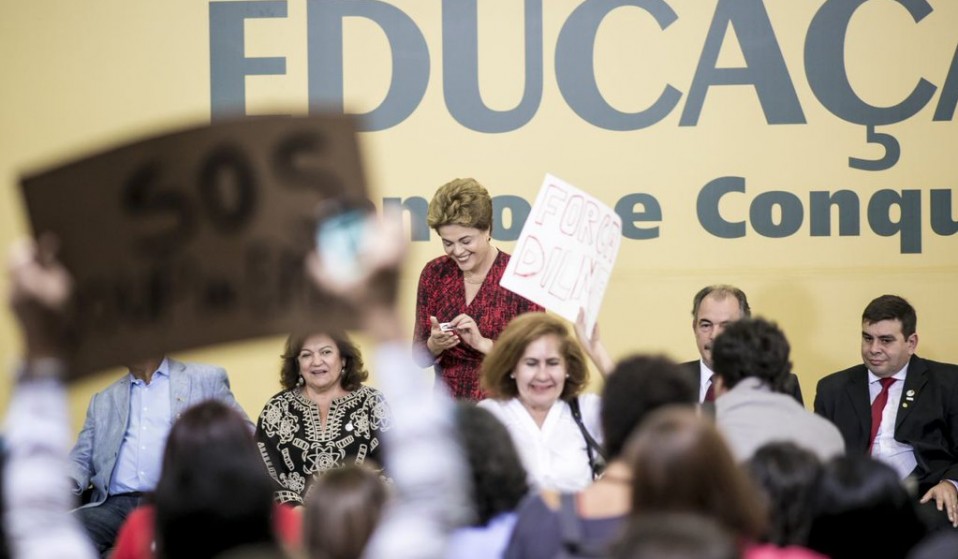 Acting lower house speaker throws out motion to impeach Dilma Rousseff after leading coup plotter dismissed over corruption. And then changes his mind...

Acting lower house speaker throws out motion to impeach Dilma Rousseff after leading coup plotter dismissed over corruption. And then changes his mind...

Observers were amazed that plotters behind last month’s lower house vote to impeach Dilma Rousseff were themselves steeped in corruption that far exceeds that of Brazil’s embattled president.

But after the instigator of the move to unseat Dilma, the right-wing leader of the house Eduardo Cunha, was himself removed by the supreme court over meddling in the investigation into the Petrobras corruption scandal, Brazil breathed a collective sigh of relief. Sanity, it seemed, had returned to congress.

Yesterday, Cunha’s successor, Waldir Maranhão, who took over as acting speaker last week, overturned the vote to impeach Dilma on the grounds of procedural flaws. Less than twelve hours later however, he changed his mind, revoking his own annulment. His move once again plunged the process into complete absurdity.

You really couldn’t make it up. Since the beginning of the drawn-out corruption scandal and impeachment battle, commentators have been comparing the high political drama to TV series House of Cards, but this latest turn of events makes the intrigue of that show look dull by comparison. People from across the political spectrum, both locally and abroad, are shaking their heads in disbelief.

Even before this latest circus act, the Brazilian public were outraged at the entire political class. They recognised the hypocrisy of the impeachment vote. Sixty percent of those who voted to remove Dilma from power are themselves under investigation for serious crimes ranging from corruption to money laundering, forging documents, misappropriating public funds, conspiracy, illegal deforestation, kidnapping and homicide.

The leader of efforts to depose Dilma, Cunha of the conservative PMDB party, was discovered to have millions of dollars in bribes in secret Swiss bank accounts last year after denials to congress.

In contrast, Dilma is charged with shifting funds around to massage government statistics before the election. She remains one of the few politicians not accused of enriching herself. Despite Dilma being blamed for a deep recession, political chaos and failing to stop corruption, only 61-67% wanted to see her stripped of her mandate, while 77% supported Cunha’s removal.

Maranhão is one of the many Brazilian politicians of all stripes under investigation for corruption. There are concerns as to the previously little-known politician from the Progressive party’s motives. Some suspect he may be acting on behalf of his predecessor, Cunha, who is unlikely to accept his removal without a fight. “Many here in Brazil are saying Cunha is acting in vengeance against the vice president Michel Temer and other members of the opposition,” explains Cynara Menezes, an independent journalist and publisher of news blog Socialista Morena. “He considers himself ‘betrayed’ by his own colleagues.”

What happens next is anyone’s guess as the overturning of an impeachment vote is without precedent – and reversing this decision within 24 hours simply beggars belief. It’s as yet unknown who put pressure on Maranhão to annul his own annulment.

Developments of recent months have shown the people’s views count for little as anti-Dilma events have largely been stage-managed by militant right-wing politicians working with a politicised and monopolistic media. But as Brazil continues to blaze through uncharted territory, pressure from below could prove decisive as the country’s fate continues to hang in the balance.

Linkedin
OTHER ARTICLES
A sharp increase in officers armed with the electrical weapon is resulting in serious injuries and deaths.
The government’s brutal crackdown on NGOs has left victims of rape without anywhere to seek help. And now, as the country plays a key role is Russia’s war, things are only getting worse.
Photographer Jack D. Teemer travelled through US cities to create a vivid document of a region in decline.
With the virus now a global health emergency, we must take steps to fight misinformation and demand a swift UK-wide vaccine roll out, writes Phil Samba.
As the Criminal Bar Association enters its fifth week of action, criminal barrister Russel Fraser explains why the legal professionals have walked out and how action is likely to escalate.
A new series of photos by Johny Pitts shines a light on communities and subcultures that have all too often been overlooked.