News & Politics / Activism / For LGBTQ+ football fans, even more must be done 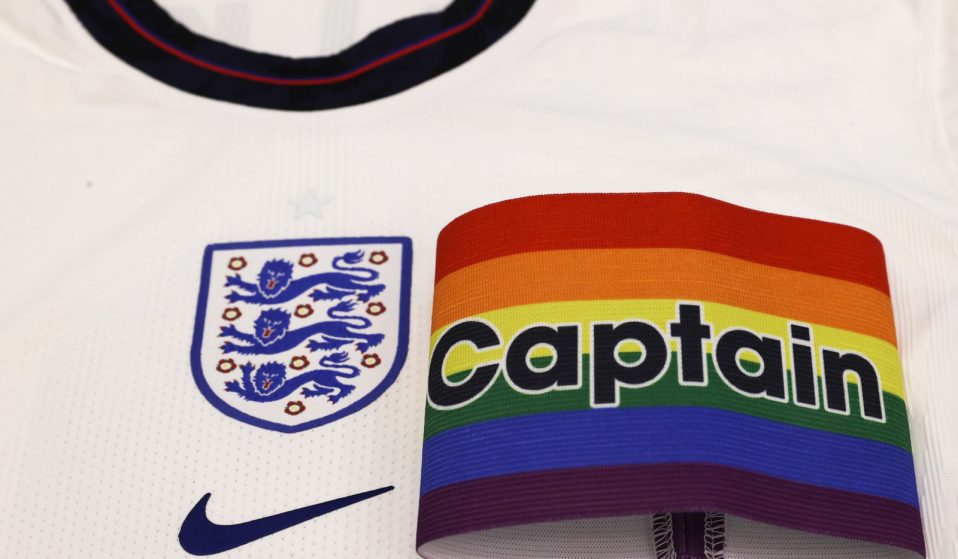 This year’s Euros showed glimmers of hope for LGBTQ+ inclusion and diversity in football – but can that energy be channelled into the World Cup?

This year’s Euros showed glimmers of hope for LGBTQ+ inclusion and diversity in football – but can that energy be channelled into the World Cup?

In June, early on at this year’s European Championship, UEFA – Europe’s biggest footballing body, which organises the quadrennial tournament – blocked a move by the mayor of Munich, Dieter Reiter, to have the city’s Allianz Arena lit up in rainbow colours for Germany’s game against Hungary. That month, the Hungarian state had passed domestic legislation akin to Britain’s Section 28, so UEFA claimed that lighting up the stadium would carry “political context”. And, as we all know, international football is stringently apolitical; it’s not as though teams representing nation states sing their anthems prior to matches.

Coupled with the flying of anti-LGBTQ+ banners by Hungarian fans in Budapest, it felt easy to assume that the running sore of homophobia in football was still present, infecting the sport. Germany reacted to the blockade with its own moves of symbolic solidarity: in lieu of the Allianz, stadiums across the country lit up in rainbow colours. German fans at the game were decked from head-to-toe in Pride gear. Germany’s Manuel Neuer continued to wear a rainbow-themed captain’s armband, as he had throughout the group stages, a gesture also taken on by England captain Harry Kane. Albeit ignored by the cameras, a fan ran onto the pitch during Hungary’s national anthem and raised a Pride banner high. Germany’s Leon Goretzka, a scorer on the night, celebrated with a heart; a picture of which he later tweeted with the caption “spread love,” accompanied by a Pride flag emoji.

This was just the first domino to fall. At the quarter finals in Baku, where Volkswagen were stopped from using rainbow colours in their pitchside ads – a rare occasion where ‘pinkwashing’ has meant something meaningful – Denmark fans who could smuggle their own stripes into the stadium flew them in defiance. (Some had them nicked by security in the stands, others by stewards en route to the stadium; UEFA have denied involvement). Later on, Jordan Henderson reached out to a non-binary fan on Twitter, unequivocally stating football to be “for everyone, no matter what”. Make no mistake: such a gesture of solidarity with someone of a marginalised gender identity is unprecedented in the modern game.

The England men’s national team, more broadly, has earned myriad plaudits for their commitment to inclusion and diversity, be it around race, gender, sexuality, or otherwise. These values are spearheaded by manager Gareth Southgate, who wrote on his and the players’ “responsibility to the wider community [and to use] the power of their voices to put debates on the table, raise awareness and educate” for The Players’ Tribune. Couple those values with the symbolic gestures England pursued throughout the tournament – which will go down in the history books as the best Euros campaign we’ve ever had  – and it feels, finally, as though LGBTQ+ fans have been vindicated.

The era of an intolerant footballing culture – from the fans, through to the players, through to a tabloid press so keen to demonise them both – that hounded Justin Fashanu to his death isn’t quite over. You only need to look at the racist abuse levelled at three young Black England players in the wake of England’s loss to see that. The “Homophobia in Sport” report, commissioned in 2017 by the Department for Digital, Culture, Media and Sport, argued that homophobic chants in stadia remain “reasonably commonplace,” and though stadium atmospheres have improved, with Premier League clubs emphasising LGBTQ+ inclusion in recent years, writer Ross Hunter recounted one such experience in 2020 for the Guardian.

#England took the knee in support of #BlackLivesMatter. @JHenderson scored while wearing rainbow laces. @HKane wore an LGBTQ+ rainbow armband. This is a team I can support. Win or lose, they're already winners to me. #Euro2020Final #ItsComingHome #EngIta pic.twitter.com/E7xPYQNGZt

One novel arena of rising homophobia around football is the digital space, such as with “Football Twitter”: tweets from club handles with pro-LGBTQ+ messages are frequently met with homophobic derision, often by international fans from countries with dominant anti-LGBTQ+ cultures.

But, for all the issues that still exist, the pro-LGBTQ+ wave we saw at the Euros remains a profound step in the right direction. It follows on, too, from years of campaigning and grassroots organising: be it through Stonewall’s Rainbow Laces campaign, the formation of LGBTQ+ inclusive fan groups like the Gay Gooners, or emphasised support for LGBTQ+ inclusive football teams, such as Stonewall FC.

We know that it’s near-statistically impossible that there isn’t a single gay player in the Premier League, given there are more than half-a-thousand registered players. But if you’d asked me before the Euros when we might see a high-profile footballer coming out, my instinct would be cynicism; now, I’m not so sure. It could, genuinely, be tomorrow. And as the DCMS report indicated, one can’t be what one can’t see – just imagine the uplift for closeted youth fans with a player to look up to.

All eyes are now on Qatar for the World Cup in 2022, and the next chance we have at footballing glory at an international level. But Qatar is also a state which levies openly gay men with the threat of imprisonment and, under Sharia law for Muslims, death – though it should be noted that there are no known cases where such a penalty was enforced.

When Qatar was awarded the right to host the tournament ten years ago, an ever-blasé Sepp Blatter, then FIFA President, said that gays should “refrain from any sexual activities”. Hassan al-Thawadi, the head of Qatar’s World Cup bid team, said in 2013 that all would be welcome, as long as they refrain from “public displays of affection”. That Qatar was ever given the World Cup in the first place speaks to the wanton corruption at the top of football’s international governing bodies. Blatter himself has since conceded that it should never have been given to them. But, as always, money reigns king; and one suspects that if 6,500 migrant deaths isn’t enough to rescind the right to hold football’s biggest tournament, the hypothetical risk of anti-queer violence won’t be, either.

One member of the Dutch Parliament suggested the national team play all in pink – again, a symbol, and a homonationalist one to boot. The EU has just overwhelmingly passed a resolution calling on diplomatic officials to boycott the Beijing Winter Olympics over Chinese human rights abuses, and with pressure building in parliament, the UK looks soon to follow suit. A sporting boycott wouldn’t be appropriate, but wouldn’t such a diplomatic move, in the Qatari context, send out a clear message? Perhaps. But that in itself would be another symbolic gesture.

Ultimately, this quandary shouldn’t exist in the first place. That FIFA would choose to keep the World Cup in Qatar in the wake of myriad state human rights abuses shows them to be another bureaucratic machine, like UEFA, which trades in statements of inclusion while doing little to demonstrate actual change. They have neglected not only the safety of travelling LGBTQ+ fans but the plight, too, of queer Qataris.

Qatar has conceded that rainbow flags will be allowed at the tournament, which will no doubt lead to lots of executive-level backslapping. But, as Daniel Storey wrote for the i, it’s all mere propaganda to “[create] a false image of a country’s reality, a mirage in the desert”. They may cover the tournament in rainbow-coloured plasters but the only way to repair this wound would be to relocate. Which will never, ever happen. By hosting the World Cup, in a country that legislatively oppresses its queer citizens, it is tacitly approving said oppression. There are no number of symbols that make that OK.

Linkedin
RELATED ARTICLES
OTHER ARTICLES
Yesterday thousands gathered outside Buckingham Palace after news of the Queen’s death broke.
With skyrocketing rents, packed out viewings, bidding wars and more, renting in London has never been harder.
A group of young Palestinians have found temporary freedom in the act of parkour, reimagining wreckage and ruins as a series of high-octane playgrounds.
By turning a real-life crisis into daytime television fodder, TV bosses have once again shown themselves to be completely out of touch with audiences.
Sean Maung’s photos are a love letter to the Black and brown communities that make up New York.
Cindy Campbell recounts how her brother ushered in a new era of musical culture at a party she held in the Bronx in ‘70s.