News & Politics / Activism / How to save the world, with George Monbiot 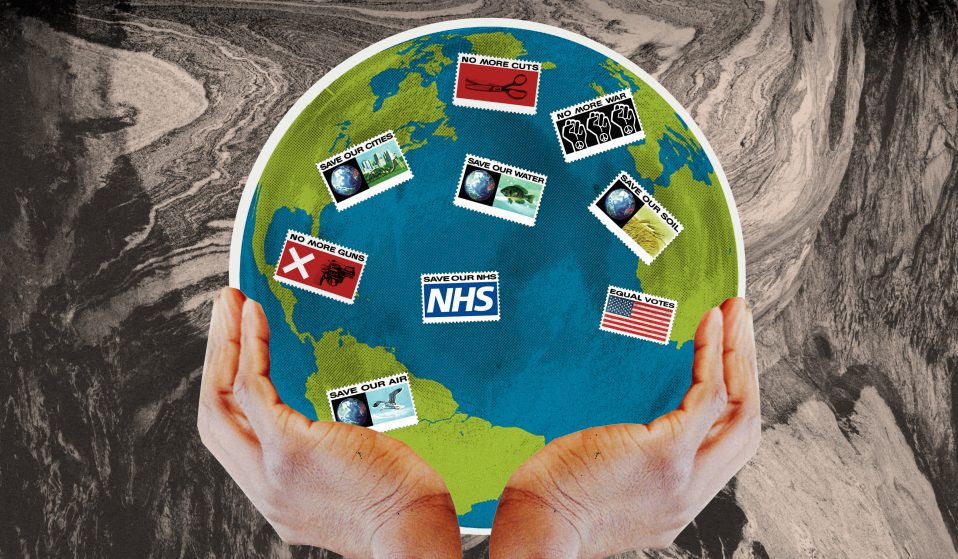 The world’s in trouble – so what can we do? In a new series, we seek advice from some of the world’s most notable activists – starting with writer and environmentalist George Monbiot.

The world’s in trouble – so what can we do? In a new series, we ask some of the world’s most notable activists for practical tips on how to make a tangible difference – starting with writer and environmentalist George Monbiot.

George Monbiot conducted his first protest when he was just eight years old. After discovering that a local man was planning to cut down a tree – home to a woodpecker’s nest – on the common land close to his house, he ventured down, clung to the trunk and refused to move.

“He turned up with a chainsaw but I stopped him working on it,” George remembers. “But, being an obedient child, I then went home for lunch – with predictable consequences. So this taught me two very important things. One: Don’t act alone. Two: Don’t be obedient.”

It’s a mantra that stuck. Through his work, the writer and activist has become one of the world’s most trusted voices on environmental concerns, routinely ruffling the feathers of the global establishment via a combination of published work and direct action.

Today, as the world’s population faces full-scale environmental breakdown in the form of both climate change and the collapse of global ecosystems, he’s at the forefront of calls to implement real change now – and fast.

“The supposed efforts to prevent environmental breakdown turn out just to have been window dressing – ways of keeping us happy while capitalism proceeds as planned,” he says. “What people have now seen is that we can’t rely on governments to change this for us. We can’t rely on asking them nicely. Oligarchs don’t give up power voluntarily. It has to be seized from them.”

Here, as shit very much gets real, the 56-year-old shares advice on how exactly we can begin to seize back that power – and make a genuine, positive difference.

“We have been fundamentally betrayed by the political class, but also by the media – which has marginalised, dismissed and mocked environmental concerns in a way that shows that it’s a huge part of the problem. We can’t allow them to define the limits of what can be done. Don’t allow politicians to tell you what is or isn’t realistic. Don’t allow the media to tell you what is and isn’t important. These are things we must decide for ourselves and we cannot look to those in power to give us the answers.

Bill McKibben has written some wonderful articles on climate which I strongly suggest people follow. There’s some great writing on the website Think Progress, as well as on Grist and on Vox. Obviously, Naomi Klein has written some crucial books on the subject. George Marshall’s book, Don’t Even Think About It, is really important. And there’s new stuff by new authors coming through all the time. There’s a very interesting book, just out, called Radical Transformation by Kevin MacKay.”

“Just switching from an animal-based diet to a plant-based one has an enormous impact on our relationship with the earth’s living systems. This is because a plant-based diet needs far less land to support it. Much of the land which should be supporting wildlife and rich ecosystems and should be sucking carbon dioxide out of the air is instead being used to produce livestock – either to grow the grain that livestock eat, or as pasture land for livestock to feed directly on the grass.

When you keep animals on the land, you have to kill the predators, you have to exclude the wild herbivores, you have to cut down the trees to provide grazing. All these places that could otherwise be rich ecosystems are instead highly degraded and impoverished. By making that switch, you instantly cut your environment to a very large degree. You also considerably cut your carbon footprint, because of the very high global heating impact of animal farming.”

“We have to demand a change to the systems that govern our lives. For instance, I cycle my daughter to school every day, but that doesn’t really make a big difference to the amount of air pollution which is being caused by people driving their children to school. Because, in cycling, I release road space that somebody driving a bigger car than I would have driven then uses. I release parking space for people who drive their Range Rovers onto the pavement and pump pollution straight into the classrooms.

It’s not enough just to withdraw from that system. We have to fight to create a better system. For example, create clean air zones around the schools where no one can drive in, create better cycle paths to make it much easier for people to cycle in, take drastic action to get people out of private transport and into electrified mass transit. These are things we can’t just do through switching our own choices, we have to change society in order to do that – and you do that by democratic means.”

Scrap individual action – find a group to work with

“The most important thing to do is to recognise that you’re not going to change anything by yourself. It is about combining with other people and engaging in effective group action as a political community that changes things. The idea that you can sit at home putting out things on Facebook and think you’re going to change stuff, it simply doesn’t happen like that. You have to combine and ignite.”

Identify your strengths (and weaknesses)

But the idea that we should all do exactly the same thing and seek to exercise the same talents is a recipe for despair, because we don’t all possess the same talents. I’m good at communicating but I’m useless at organising and I have to recognise that. I’m never going to be an organiser, but I am useful – I hope – in talking about the things around which we need to organise.”

Prepare to be prepared

“A situation can appear hopeless for years – and because it appears hopeless at any one point, you imagine it will be hopeless forever. Then suddenly, things change. Politics moves in fits and starts. It doesn’t evolve slowly. Nothing happens for years and then everything happens in weeks. Our role as activists is to be prepared. Have the organisations in place, have the strategies in place, have the knowledge in place – so that when these opportunities arise, we can move very quickly and press for change. The opportunities don’t come often, but when they do: we can be extremely effective.”

Linkedin
RELATED ARTICLES
OTHER ARTICLES
From the Yakuza to a biker gang, Bruce Gilden recounts capturing Tokyo and Osaka in the ‘90s.
The government is scrapping the Human Rights Act in a move that will hit marginalised people hardest.
Photographer Robin Graubard’s debut book offers an unflinching record of turbulence and change across the Balkans.
Following the release of his newly republished 1991 book, Redheads, the American photographer reflects on his celebration of ginger people and their magnetic power.
To mark the anniversary of the mass trespass of Kinder Scout, a group of hikers came together with the intent of creating a new, fully inclusive culture for rural spaces.
In the latest OFFF Dispatch, the enigmatic designer dives into his process, connecting the dots between his unique and varied creative output.