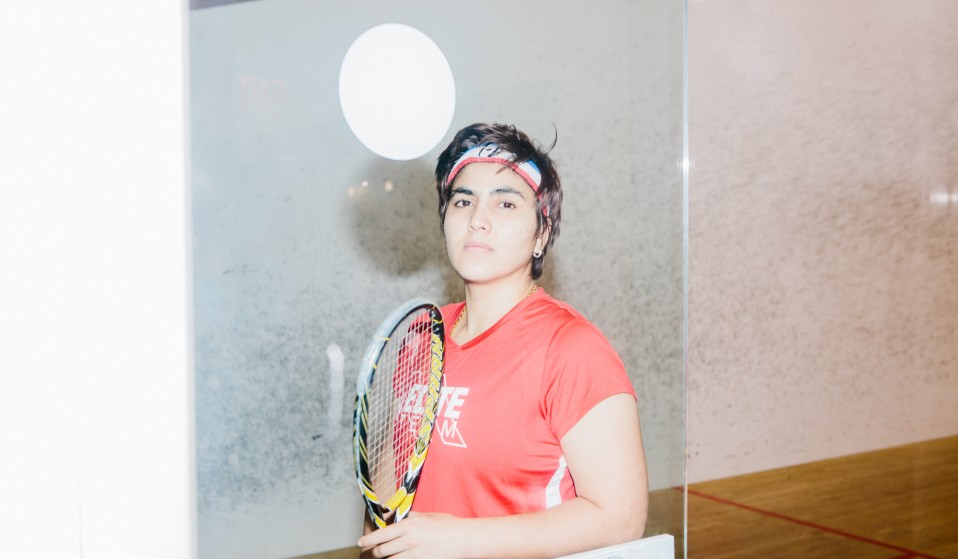 Maria Toorpakai Wazir has managed to achieve the impossible: rising to stardom as a pro squash player in a place, dressed as a boy, where sticking out can get you killed.

Maria Toorpakai Wazir has managed to achieve the impossible: rising to stardom as a pro squash player, dressed as a boy, in a place where sticking out can get you killed. Now a film has been made about her life.

Maria Toorpakai Wazir has never had the odds in her favour. Where she grew up – in the Taliban-controlled tribal region of Waziristan, in Pakistan – women are forbidden from walking without a man, attending school, watching TV, listening to music or even reading. Just playing sports can get you killed. Yet despite those restrictions, she has become a top-ranked professional squash player through an unlikely path: disguising herself as a guy.

Now 26, Maria says she understood from a young age that boys and girls did very different things. “I saw girls staying at home or standing in their doorways, holding their younger siblings… It was just so boring!”

She’s sitting in a corner of London’s Barbican Centre before the UK premiere of Girl Unbound, a documentary about her life directed by Erin Heidenreich, as part of the Human Rights Watch Film Festival. Wearing a retro blazer befitting the occasion, Maria gives forthright answers that leave little room for questions. Rather than slipping into long-winded digressions, it’s a case of making every minute count, ensuring that the significance of her story gets across.

It started when, as a four-year-old, Maria told her parents she’d rather play outside with the boys. They didn’t realise she was serious until she gathered up all her dresses and burned them. Finally, her dad got it. He took Maria to get her hair cut, let her wear boys’ clothes and started calling her Genghis Khan, after the Mongolian warlord.

At home, Maria continued to perform the duties expected of her (like taking care of her little brothers) but outdoors, she had fun as a troublemaker who got into fights with boys. Her father, Shamsul, was a tribal elder whose passionate belief in equality saw him denounced by his family and deemed mentally ill. But he continued to defy convention by educating Maria privately and supporting her interest in weightlifting (she was ranked second in Pakistan’s junior division). Then she discovered squash and a true calling emerged. “My dad liked the idea that I would put my anger on the wall instead of other people,” she explains, straight-faced. “I was a very sporty and aggressive kid.”

Joining a proper squash academy, however, meant providing a birth certificate to its director… and although he proved sympathetic, the other players refused to train with her. “No one wanted to believe that I was a girl,” she says. “Sometimes I travelled to the tournaments all by myself, maybe arriving at 3am, and I would sit in front of the squash court where there would be no one – just stray dogs and cats – until people came to open the gate at prayer time.”

The truth of Maria’s gender gradually emerged, bringing with it unwelcome attention in her local community. “They bullied, harassed, attacked me, made fun of me in every possible way. And I couldn’t understand! I kept thinking, ‘But I’m the same person.’” 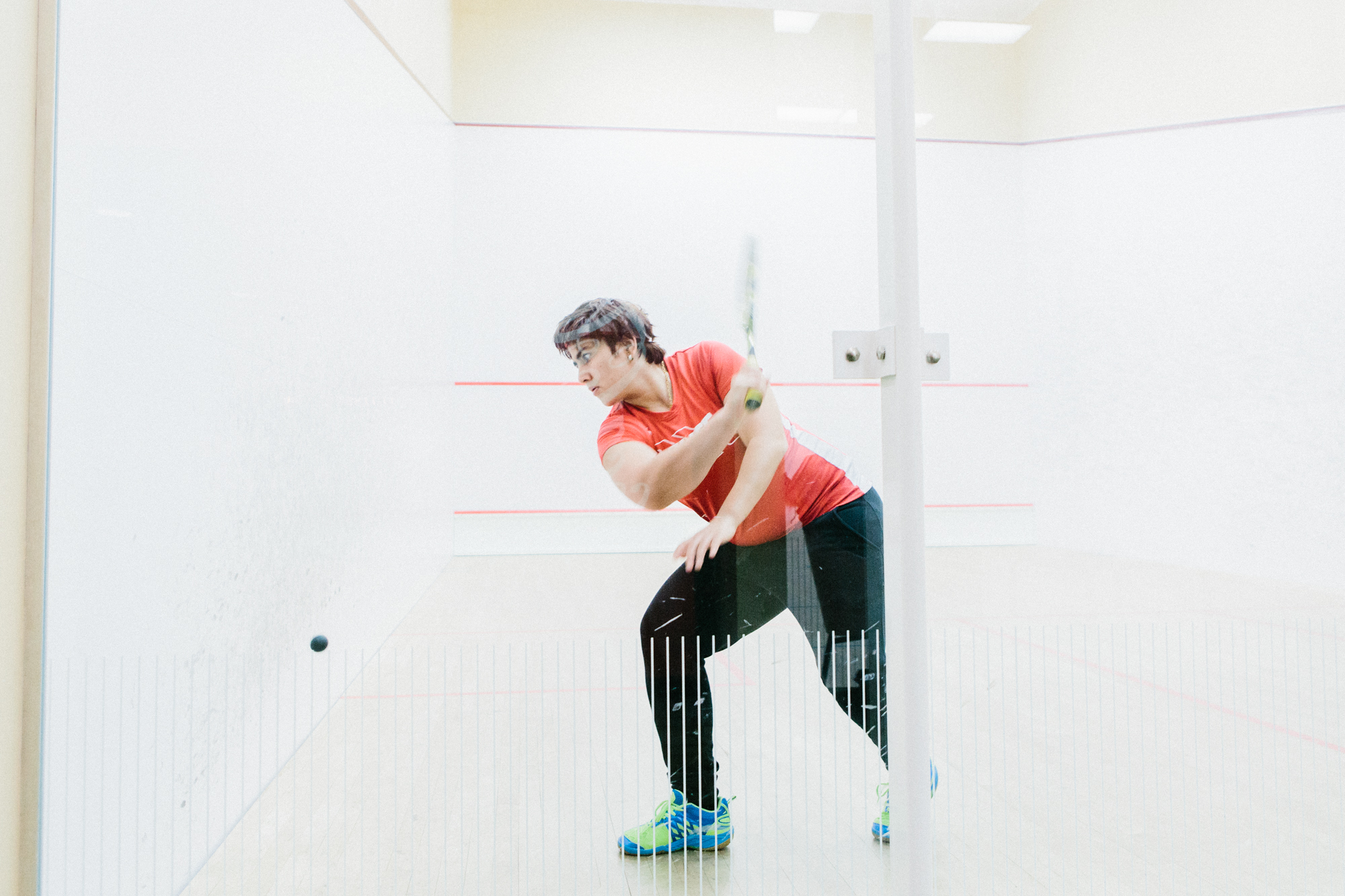 Undeterred, Maria turned professional at 16 and was honoured by the president of Pakistan for her remarkable achievements. The Taliban saw things differently. For years, Maria’s family kept moving home over safety concerns for her sister Ayesha, a human rights activist who has become the youngest politician in Pakistan. But having a female squash champion performing in shorts, without a veil, took the threats to another level.

Maria would spend the next three years locked in her house, hitting squash balls against her bedroom wall and sending “thousands” of emails to international squash coaches. Eventually, Maria got a reply from former Canadian pro Jonathon Power who invited her to his academy in Toronto, where she now lives.

Today Maria is exploring a non-binary identity, but feels no urgency in defining herself or letting others define her. “I spent most of my life as a boy and it felt very confusing to start becoming a little bit feminine after spending time with girls in squash camps. There was a lot of learning.”

Seeing men mistreat women, she says, made her want to behave like an ideal man, just to see what that would look like. But when around guys, she’d try out her idea of an ideal woman too. “I’m happy to have experienced all that. At the moment, yes, there is confusion, but I’m not worried about myself. I’m pretty happy the way I am.”

Maria continues to visit her family back in Pakistan, where she’s helping to establish a hospital and hoping to empower others to follow her lead. Her dad – a tall, gentle gure dressed in a turban – is present for today’s screening and seems every bit the proud parent.

“I know that the higher I go, the greater the risk will be,” says Maria. “But I am from the Wazir tribe and we never give up. I have a very strong faith: if death is going to come – it can come on the road, it can come in bed or it can come from the Taliban – at least I know that I can do this.”

After all, Maria adds, she understands that she’s only being threatened because she poses a threat to them. “I’m making them feel weaker. If a person from this region can do this, how can they stop anyone else in Pakistan?” she says. “I want to tell girls: you are born free and you are born brave.”

Linkedin
RELATED ARTICLES
OTHER ARTICLES
Max Miechowski reflects on documenting land that is being lost to the sea – and the people who live life on the edge.
Proponents of personality tests argue that they’re necessary to find the best person for the job – but in practise, they’re often discriminatory.
Alternating between colour and black-and-white, the photographer chronicled sexual liberation, economic crises and the repercussions of the war in Vietnam.
Hackney Bumps is a DIY sanctuary in the heart of East London, home to a thriving diverse community of skateboarders – and beyond.
Ireland’s national sports are modernising. At the forefront of this movement is Na Gaeil Aeracha, the country’s first ever queer GAA club.
Layna, Maysa and Amaya are three siblings looking to disrupt narratives around the sport. In doing so, they’re hoping to inspire a new generation of skateboarders.