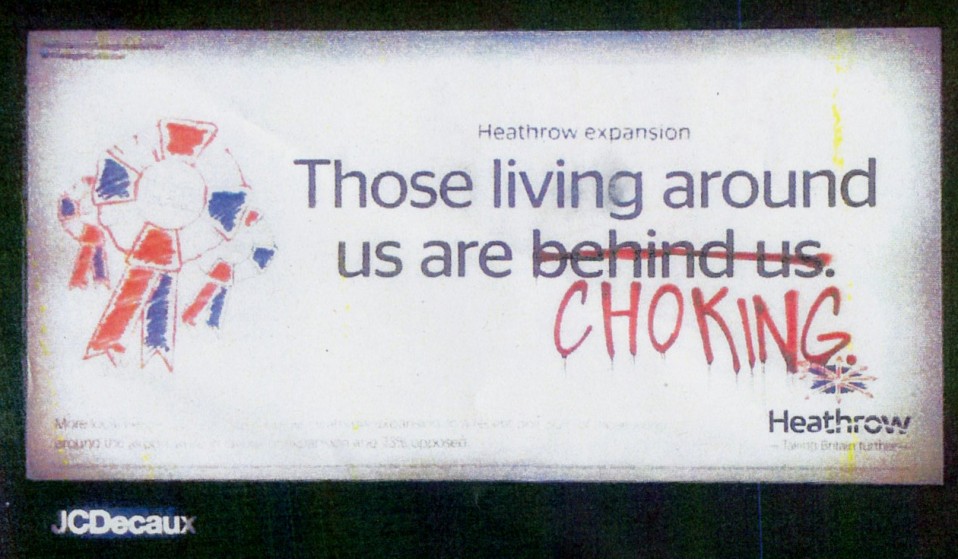 Activists who subverted pro-Heathrow advertising billboards found guilty and given hefty fines by a UK court.

Activists who subverted pro-Heathrow advertising billboards found guilty and given hefty fines by a UK court.

“Advertising makes a twat of us all,” STRIKE! Magazine reminded us when we talked about their subversive anti-advertising campaigns. It’s the propaganda that pollutes our public spaces.

One of the worst recent examples of a pathetic attempt to manipulate public opinion come from the pro-Heathrow Airport expansion campaign – so much so that the Advertising Standards Authority ordered them to be removed over unsubstantiated and misleading claims.

Before waiting for the ASA’s decision to confirm the ads were certified bullshit, graffiti activists Joe McGahan and Lawrence Rose took matters into their own hands – defacing the ads with some home truths. 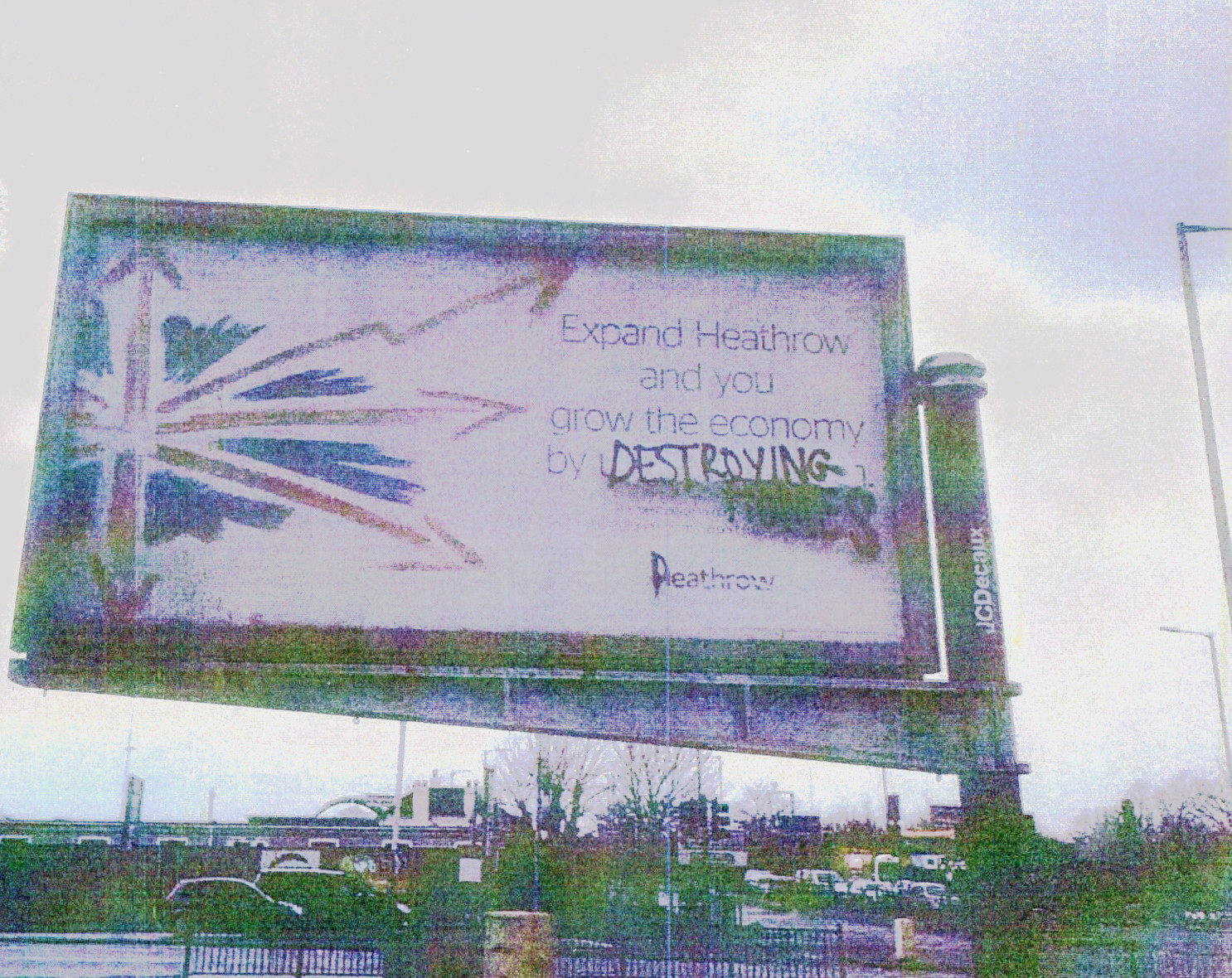 Both admitted to the graffiti upon arrest, but argued they were acting to prevent greater crimes against local residents and all other life on earth. They plead ‘not guilty’, using the statutory defence of ‘lawful excuse’.

However, a jury at Isleworth Crown Court found Lawrence, 29, and Joe, 32, guilty of criminal damage and Judge Edmunds QC ordered them to pay costs of £1615 and £1040 respectively.

In a bitterly ironic judgement, given the damage a third runway is likely to inflict on local residents, the pair were also convicted of going equipped to cause criminal damage against the property of Heathrow Airports Ltd and sentenced to a twelve month conditional discharge. 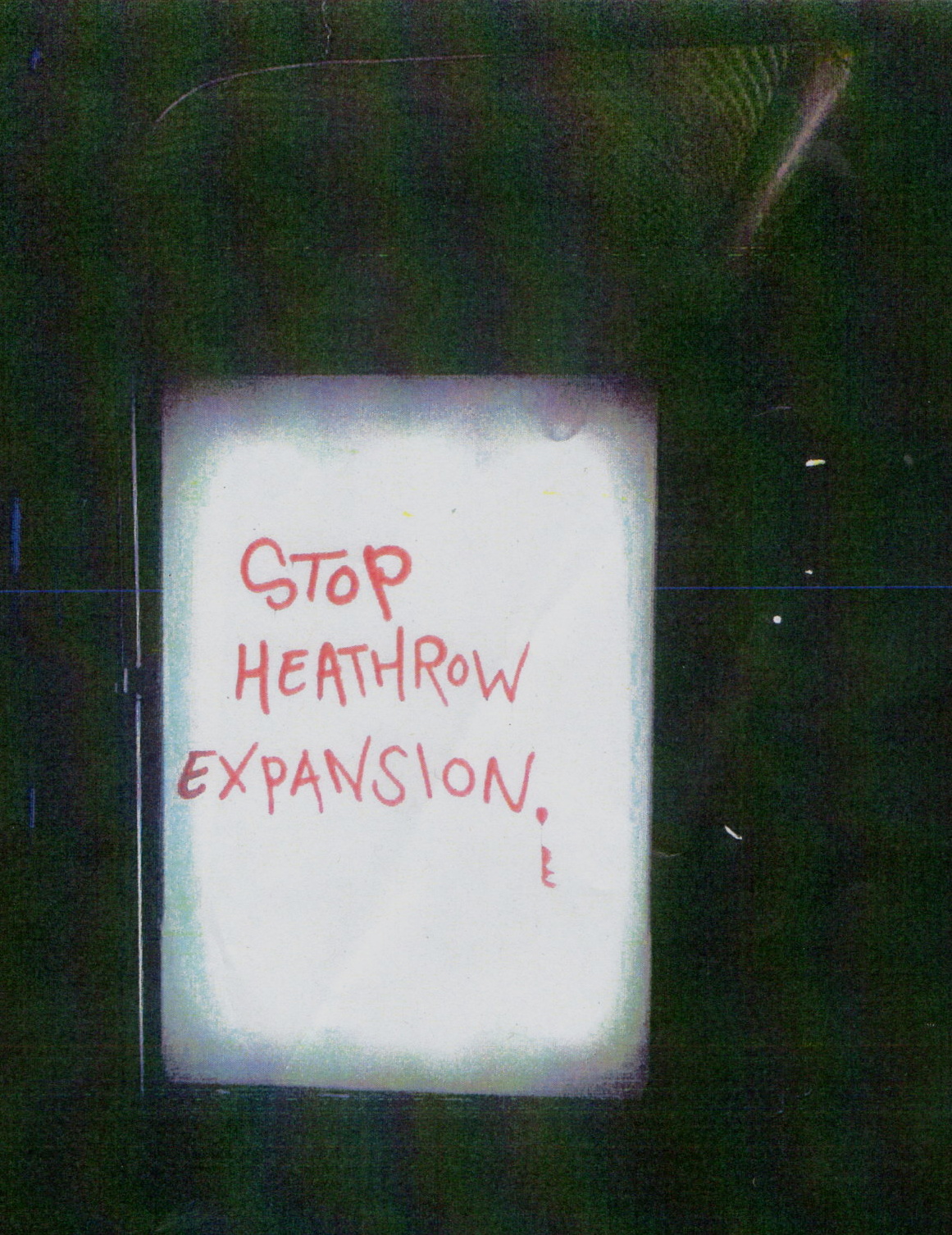 While Heathrow’s claims have been proven misleading, Lawrence and Joe have science on their side. A 2012 study found around fifty early deaths a year can be attributed to air pollution from Heathrow. “We attempted to alter Heathrow’s fraudulent billboards in order to portray a more accurate reality of the harm and misery Heathrow’s expansion will bring to local residents and the environment,” Joe said.

Unfortunately, this was insufficient to sway the jury, but local residents have rallied in supported of the convicted protestors. “The reason my home and my daughter’s school haven’t been demolished for new runways is that people took action like this,” Tracy Howard, a Sipson resident, said. “The ones who should be in court are the Heathrow bosses doing truly criminal damage to our climate and our villages.”

Linkedin
RELATED ARTICLES
OTHER ARTICLES
Demonstrators gathered outside of Parliament to voice their concerns about the monarchy and the crackdown on dissent.
By turning a real-life crisis into daytime television fodder, TV bosses have once again shown themselves to be completely out of touch with audiences.
In his 2008 series, the photographer pictured himself as Angela Davis, Martin Luther King Jr., Malcolm X, and other prominent figures.
A group of young Palestinians have found temporary freedom in the act of parkour, reimagining wreckage and ruins as a series of high-octane playgrounds.
Following the announcement of an 80% hike in the energy price cap from 1st October, crowds gathered outside the offices of energy regulator Ofgem to protest and declare their intention to undertake a payment strike.
As the Scottish government announces a rent freeze, an activist with Living Rent who fought and won shares how they did it, and what must come next.