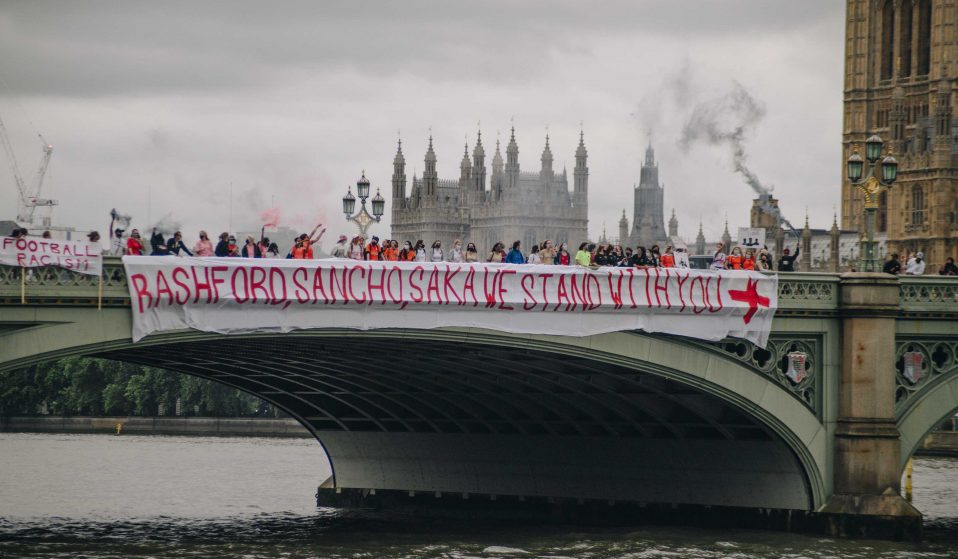 In response to the abuse faced by Marcus Rashford, Jadon Sancho and Bukayo Saka, teams from across London gathered in solidarity with the England players.

In response to the abuse faced by Marcus Rashford, Jadon Sancho and Bukayo Saka, teams from across London gathered in solidarity with the England players.

Yesterday (15 July), a group of around 100 people, made up of two football organisations and representatives from 15 grassroots teams for women, trans and non-binary people, came together in a moving display of solidarity and anti-racism. Demonstrators gathered on Westminster Bridge, and dropped a banner which read: “RASHFORD, SANCHO, SAKA, WE STAND WITH YOU”.

Others brought signs, which read: “OUR THREE LIONS”, “SHE’S THE MAN UNITED AGAINST RACISM”, and “LOVE FOOTBALL HATE RACISTS”.

The demonstration in London comes after Marcus Rashford, Jadon Sancho, and Bukayo Saka were targeted with horrifying racist abuse following England’s loss in the UEFA European Championship final last week (11 July). The abuse has since been widely condemned, and has led to an outpouring of support for the England players. Notably, when a mural of Marcus Rashford in Manchester was vandalised, it was covered with a colourful tribute of poems, posters and messages. Rashford said that he was “lost for words” at the emotional scenes. 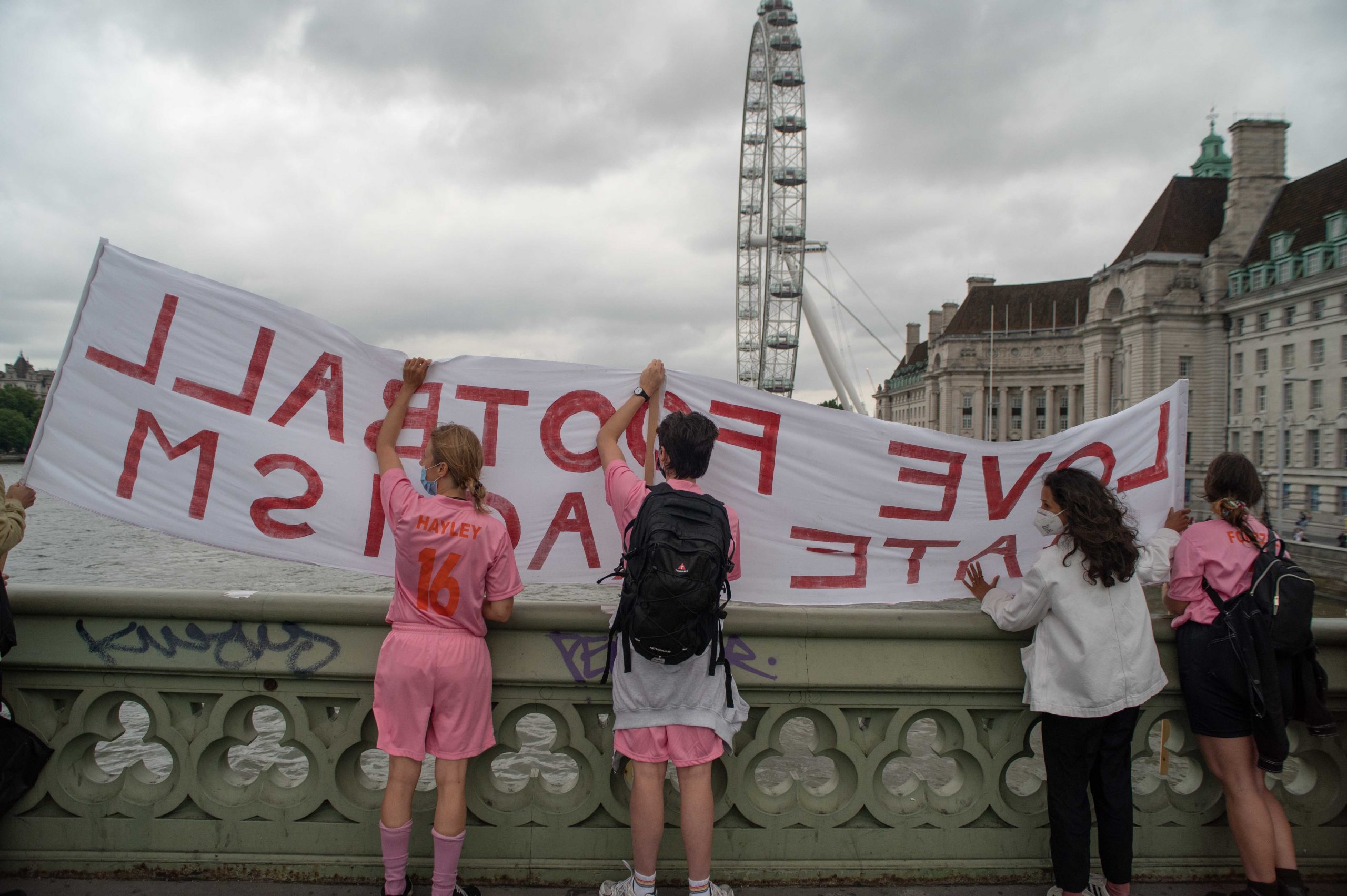 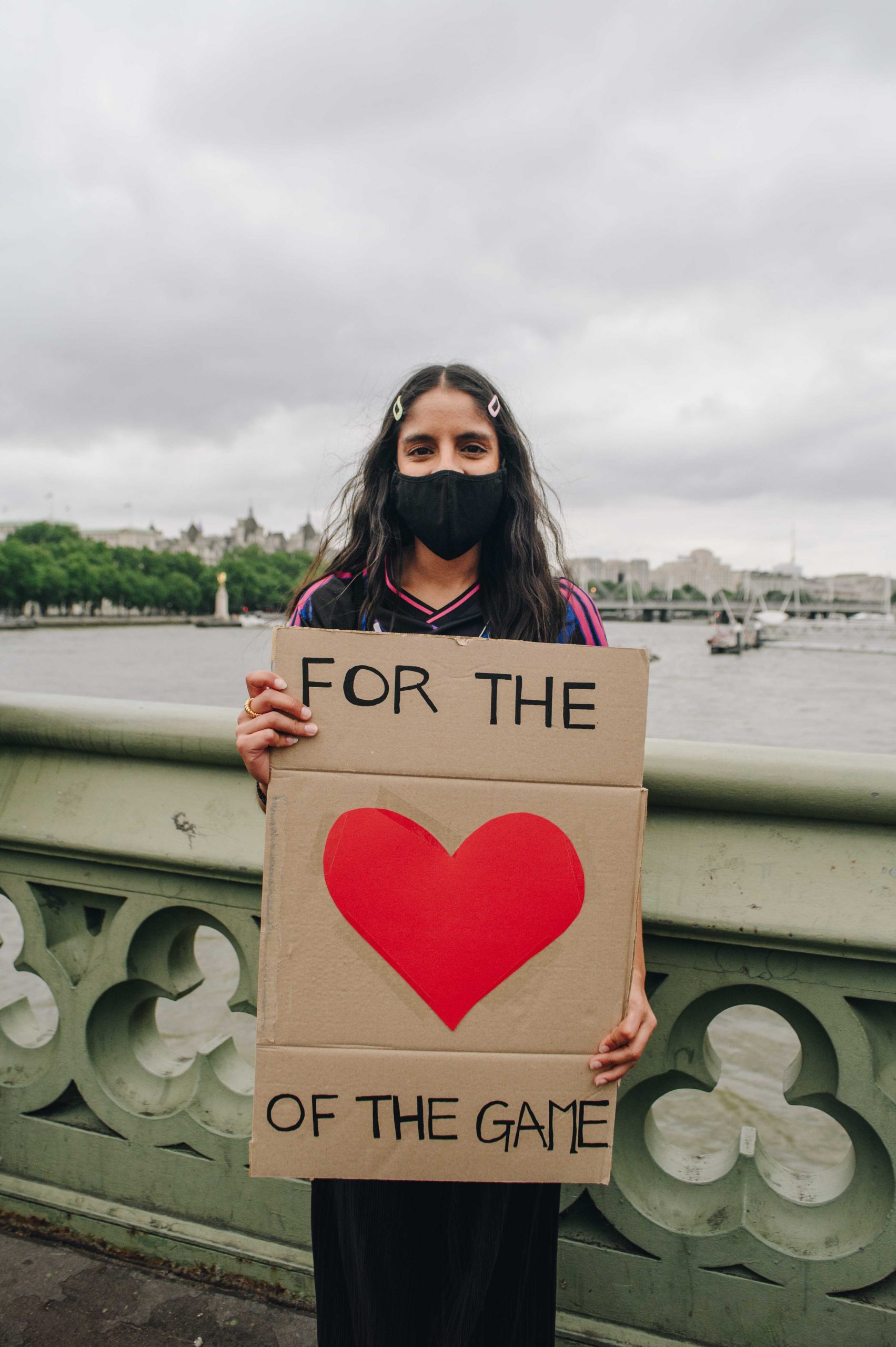 Yesterday, Saka, responding to the abuse he and fellow players had faced, said: “I will not let that moment or the negativity that I’ve received this week break me.” He also called on social media companies to protect users from such abuse.

Football players at yesterday’s demonstration on Westminster Bridge were determined to make clear that the abuse faced by the England players following the finals are far from isolated incidents, rather, they reflect systemic racism both within and outside of the sport. In fact, Home Office figures suggest that reported incidents of racism at matches have risen by 215 per cent in the past five years.

As Whippets FC, one of the grassroots teams in attendance, explained in a statement: “Football is a beautiful sport that can unite people, and we are sick of the racist abuse that has tarnished the game for too long. Racist fans are not fans, and racism needs to end – on and off the pitch.” 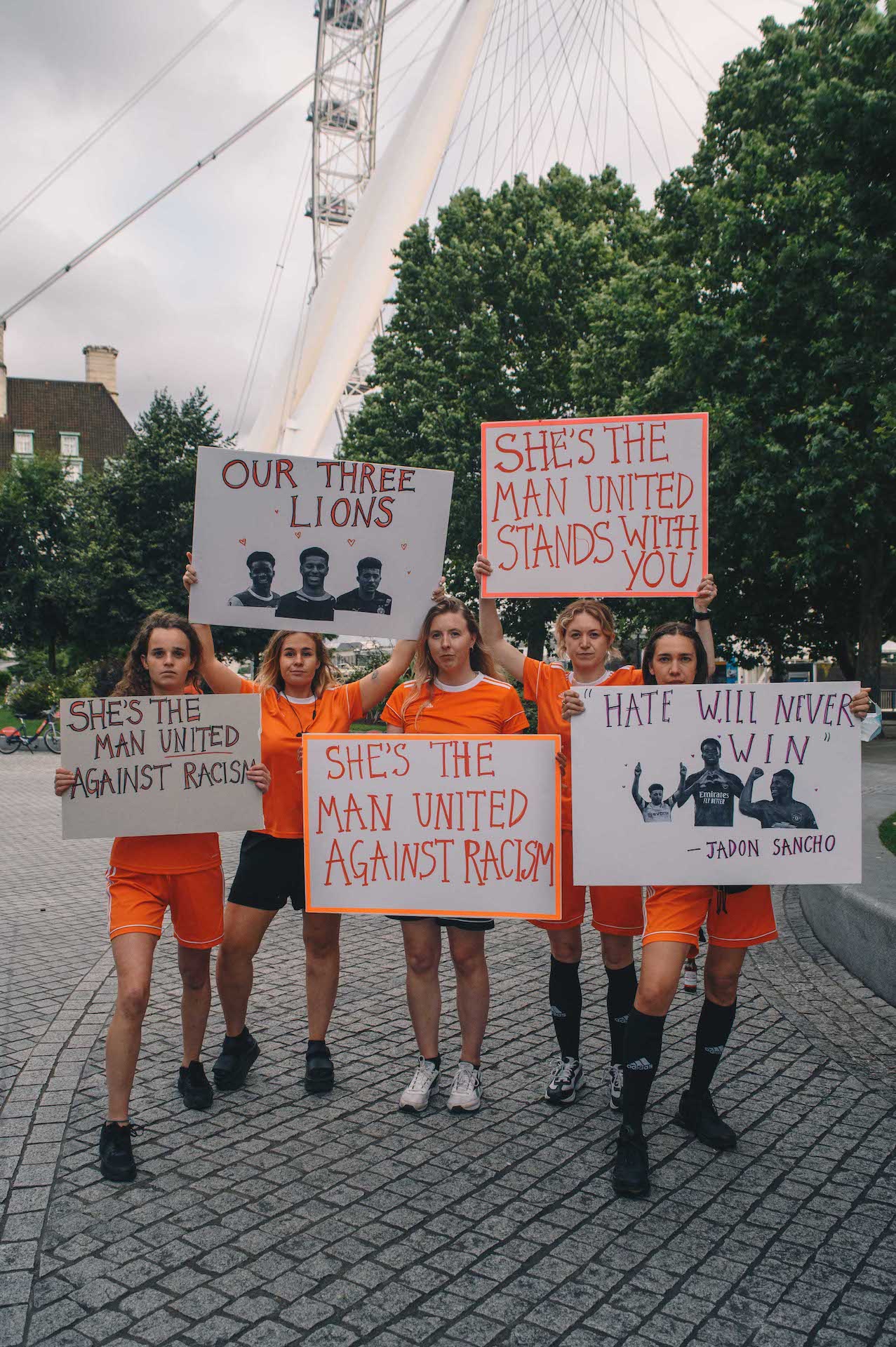 In a statement, Legends FC – another team in attendance at yesterday’s demonstration – said: “Black exceptionalism should not be a requirement for being treated with a basic level of decency. We were dismayed but not surprised at the abuse levelled at our great young players – who are doing so much on and off the pitch and inspired so many. As fans and a diverse group of female grassroots players, we wanted to show our solidarity and love to Rashford, Saka and Sancho.

“Racism has to be kicked right out of football on every level. That message needs to be made unequivocal on every astroturf, under every floodlight and on the rusty old goalposts of every playing field everywhere in the country.”

A number of the players in attendance yesterday noted the fundamental importance of grassroots teams in tackling racism in football. As a statement from Romance FC explained: “Being a grassroots player means having a passion for the game that isn’t necessarily tied to money and fame, but is tied to love of football and for your football community.

“We can help challenge racism by making sure people of colour are truly represented and given opportunities at every level of the game – whether that’s coaching, reffing, management, playing. It means taking action that makes a tangible impact and doesn’t just pay lip service, alongside showing solidarity – that should be the bare minimum.” 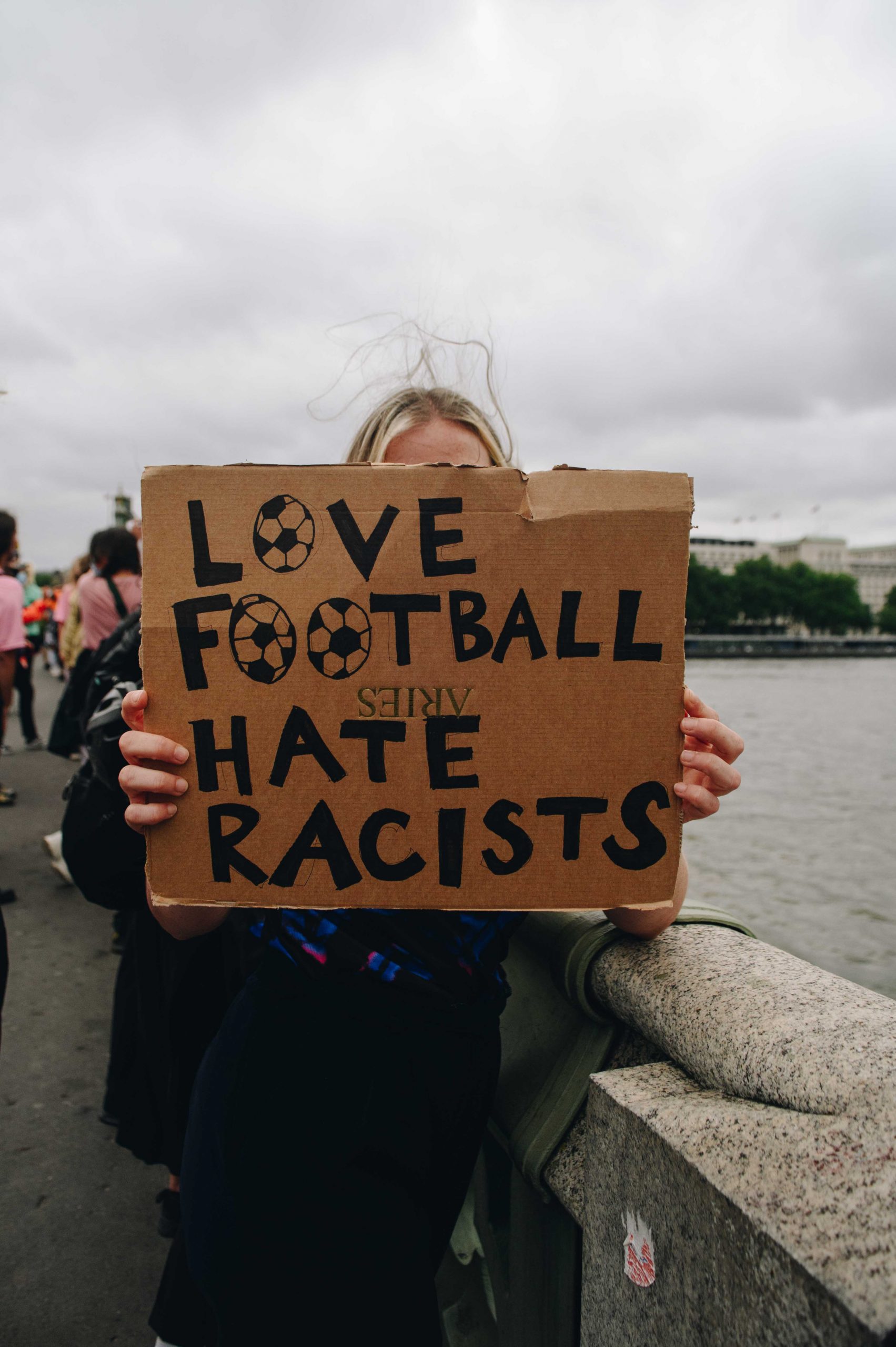 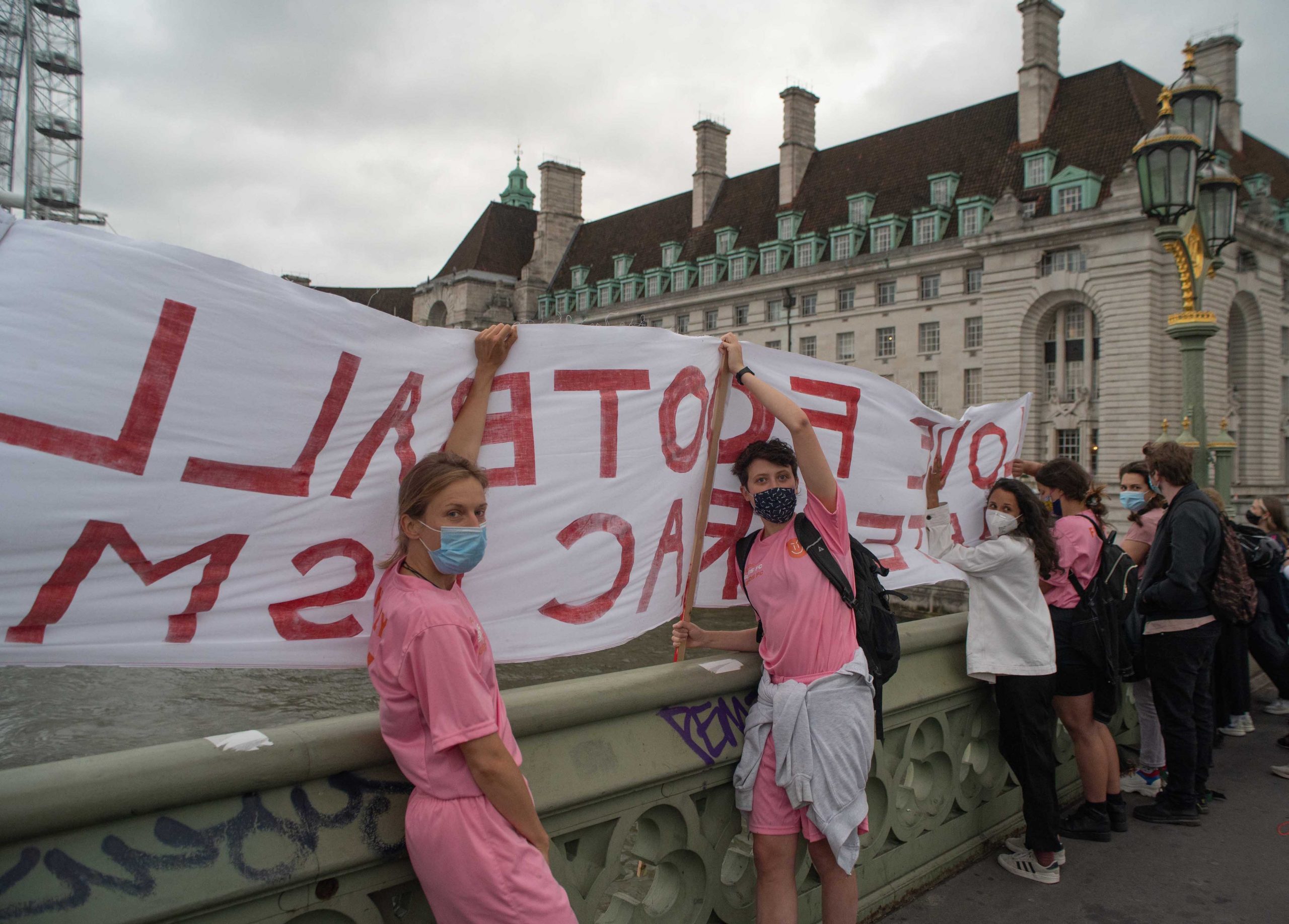 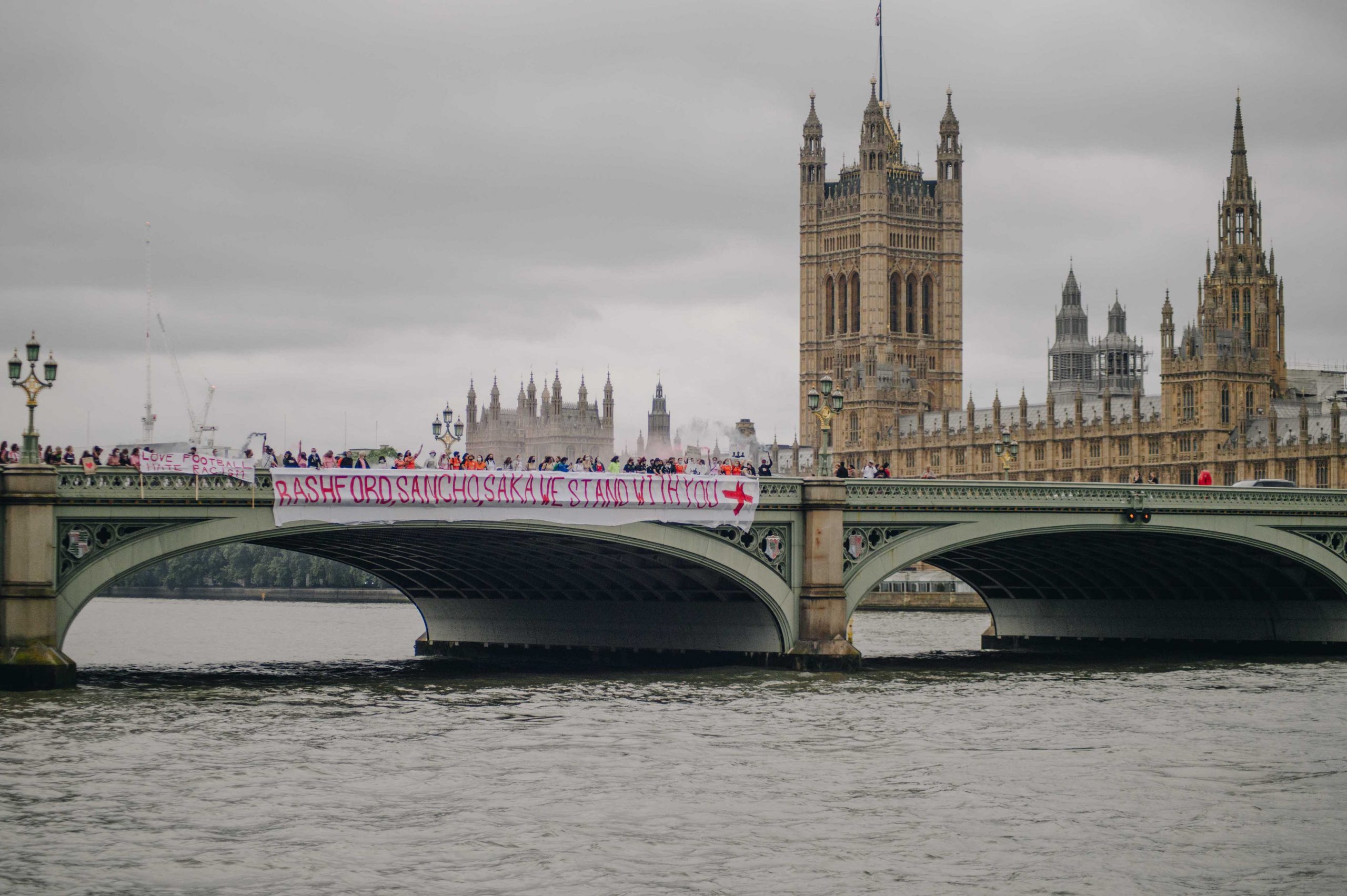 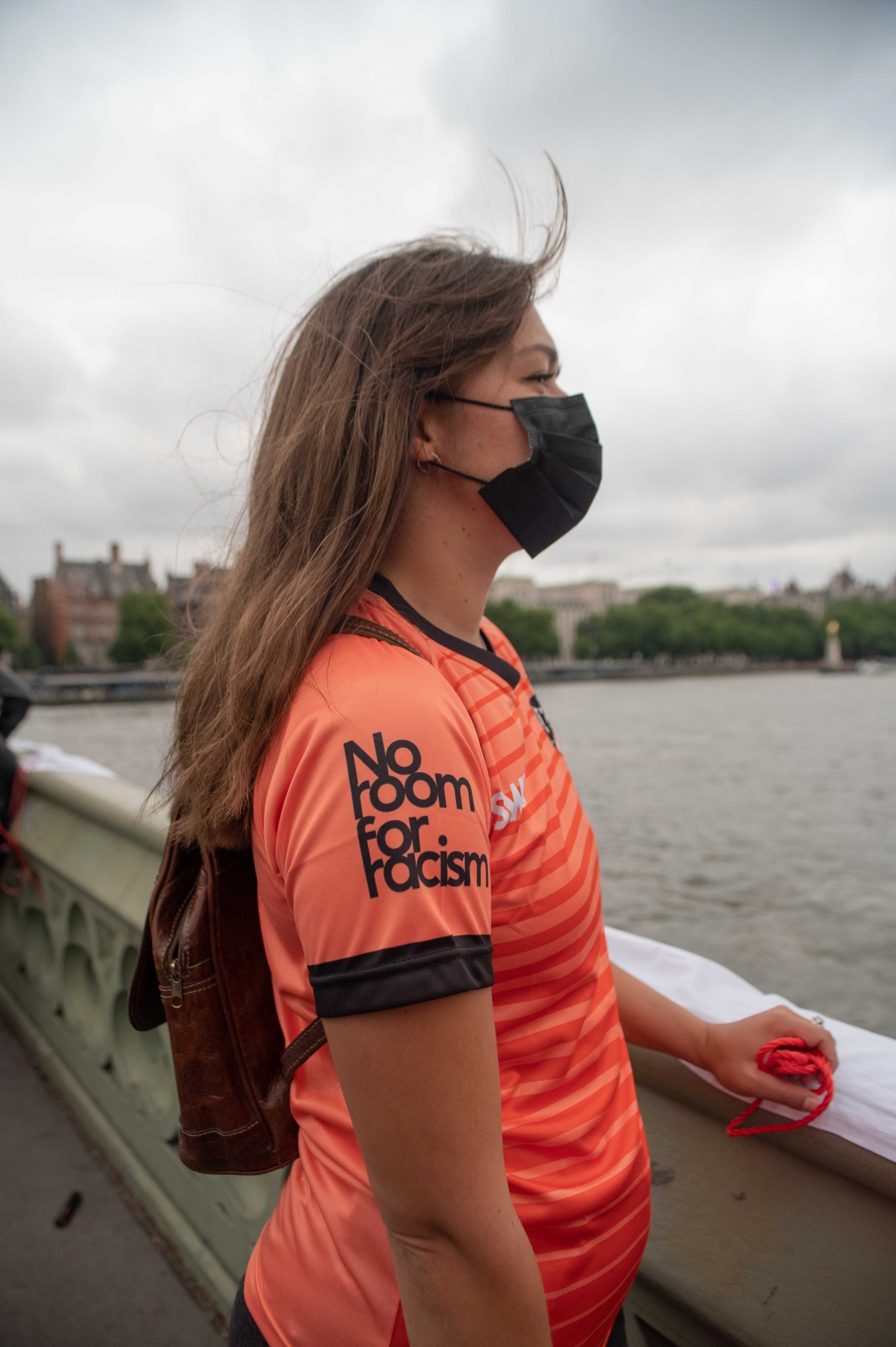 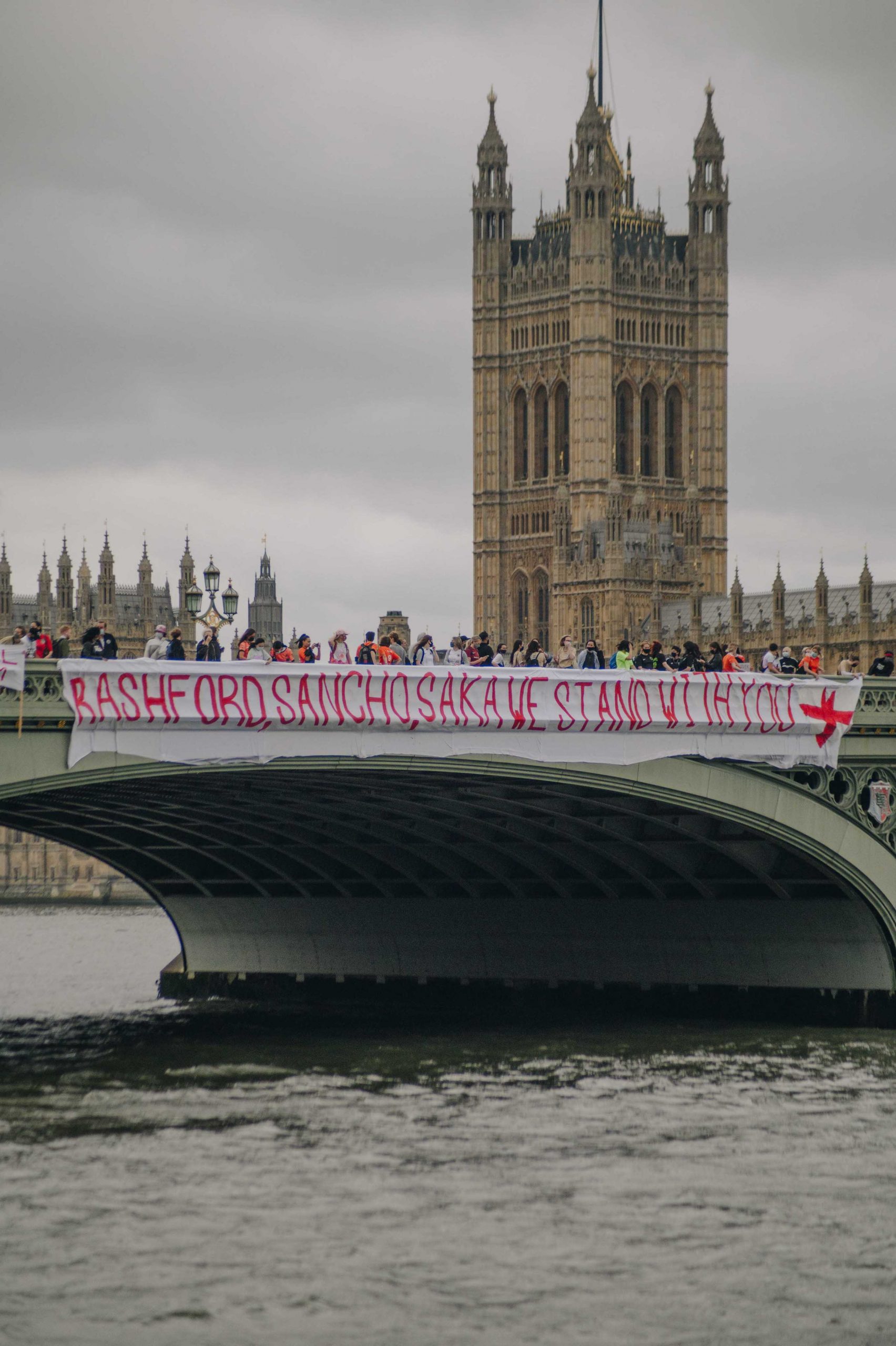 Linkedin
RELATED ARTICLES
OTHER ARTICLES
With their latest capsule collection, SCRT have constructed their own mythology, based on the story of a fictional meteor shower that hit a small Scottish town.
Following the release of his latest album God Don’t Make Mistakes, the rapper talks horror villains, police brutality and being unafraid to show his vulnerable side.
Members of the collective share some of their reasons to run as part of #UnitedBySummits, a campaign that looks to uncover transformative power of the outdoors.
The photographer recalls working with some of the biggest names in the business – from Salt-N-Pepa to the Sex Pistol – at a time when music magazines played a powerful role in shaping the scene.
To mark the anniversary of the mass trespass of Kinder Scout, a group of hikers came together with the intent of creating a new, fully inclusive culture for rural spaces.
Shifting the focus from the cost of living crisis to tackling obesity while many starve or freeze is farcical and pointless, writes Fatzine founder Gina Tonic.