News & Politics / Activism / On the ground in Paris: Music and mayhem at Nuit Debout 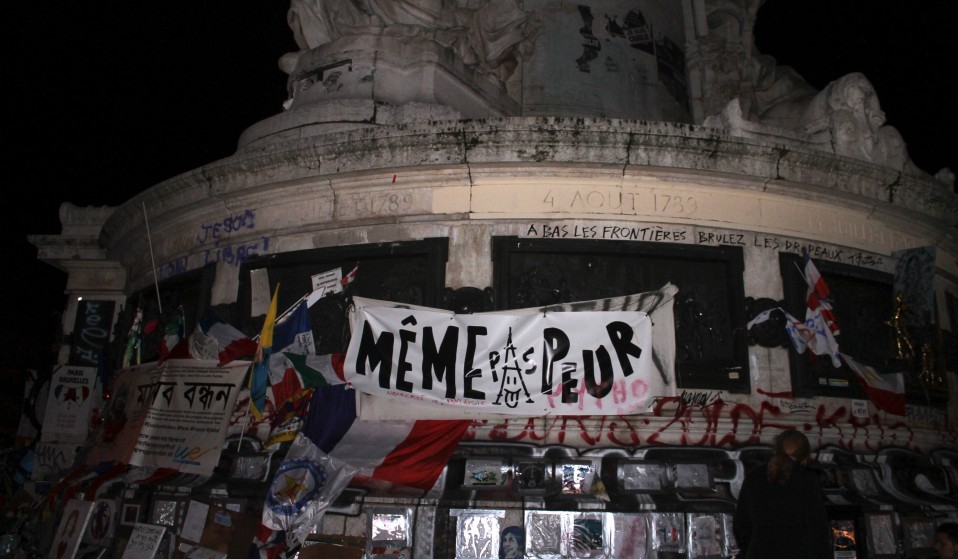 Huck reports from on the ground at the occupied Place de la Republique in Paris, where activists have begun drafting a new French Constitution.

At the centre of Paris’ Place de la Republique is an imposing statue on a stone base, surrounded by vigil candles, empty bottles, political slogans and flags. Tonight there’s a brass band at the foot of the statue, playing for a small but engaged crowd. For the past two weeks protesters have been occupying the square, spurred on by the French government’s new labour law. They’ve called themselves “Nuit Debout”, which roughly translates as “rise up at night”. 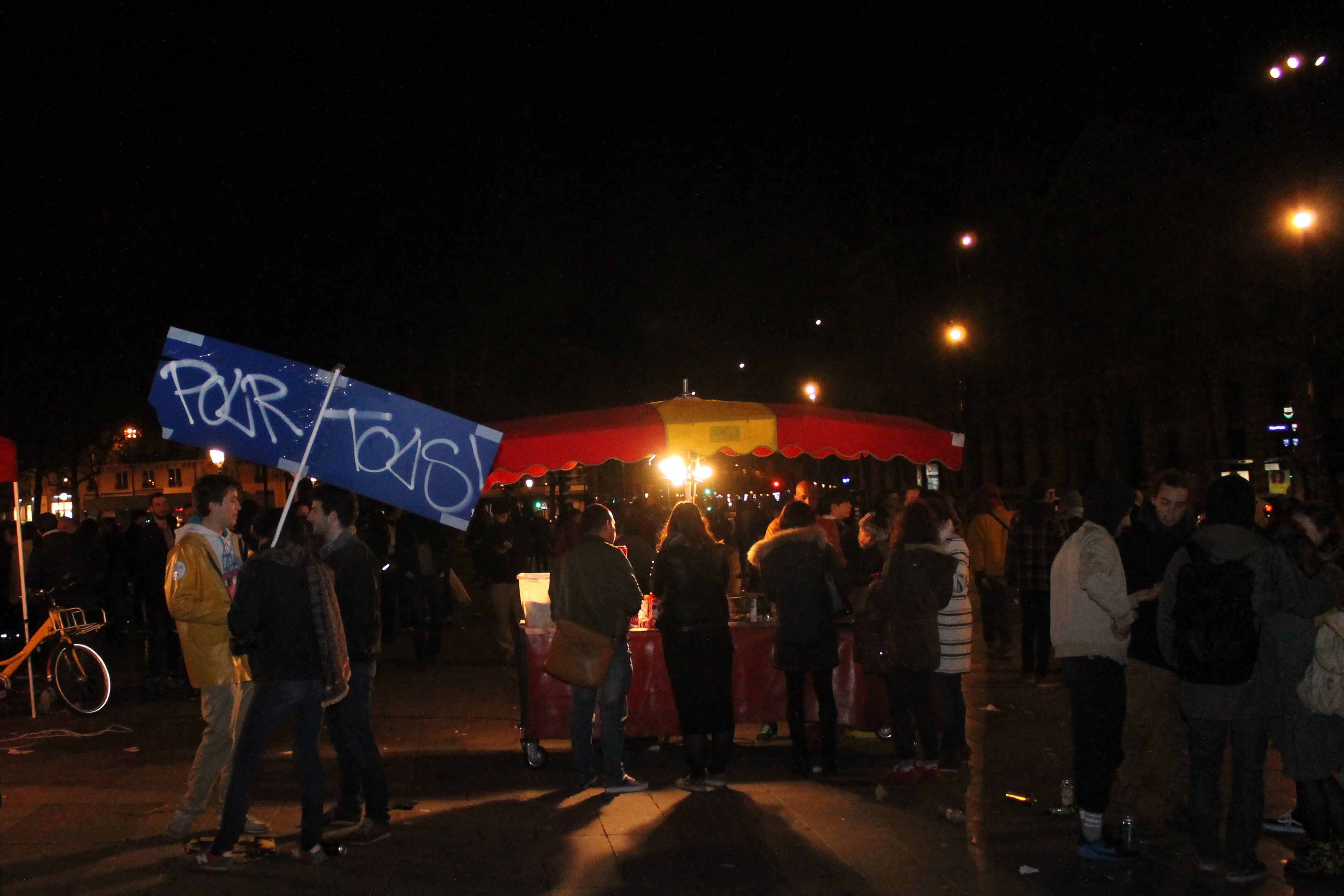 There aren’t many other photographers around when I get to the square just after midnight. To the credit of the old-school print establishment who’ve gotten a lot of flak for ignoring these demonstrations in France, this is a weird time to show up to report on a story.

Protesters have taken things into their own hands, setting up a makeshift radio station (Radio Debout) not far from the statue – a tarp, a naked lightbulb, and a mess of wires. The broadcasters inside look young and deeply engrossed in their work, but they seem welcoming as I wander into one of their plastic tables (it was pretty dark under the tarp).

There’s a booth with some activist literature as well: a pamphlet about unlawful immigration stops that’s being distributed, even at this hour, by an activist set-up next to a crowded rap-battle.

Place de la Republique was a political action ground long before Nuit Debout, hosting homeless camps, pro-refugee actions, and COP 21 demonstrations, as well as vigils for both the Charlie Hebdo and the November Paris attacks. 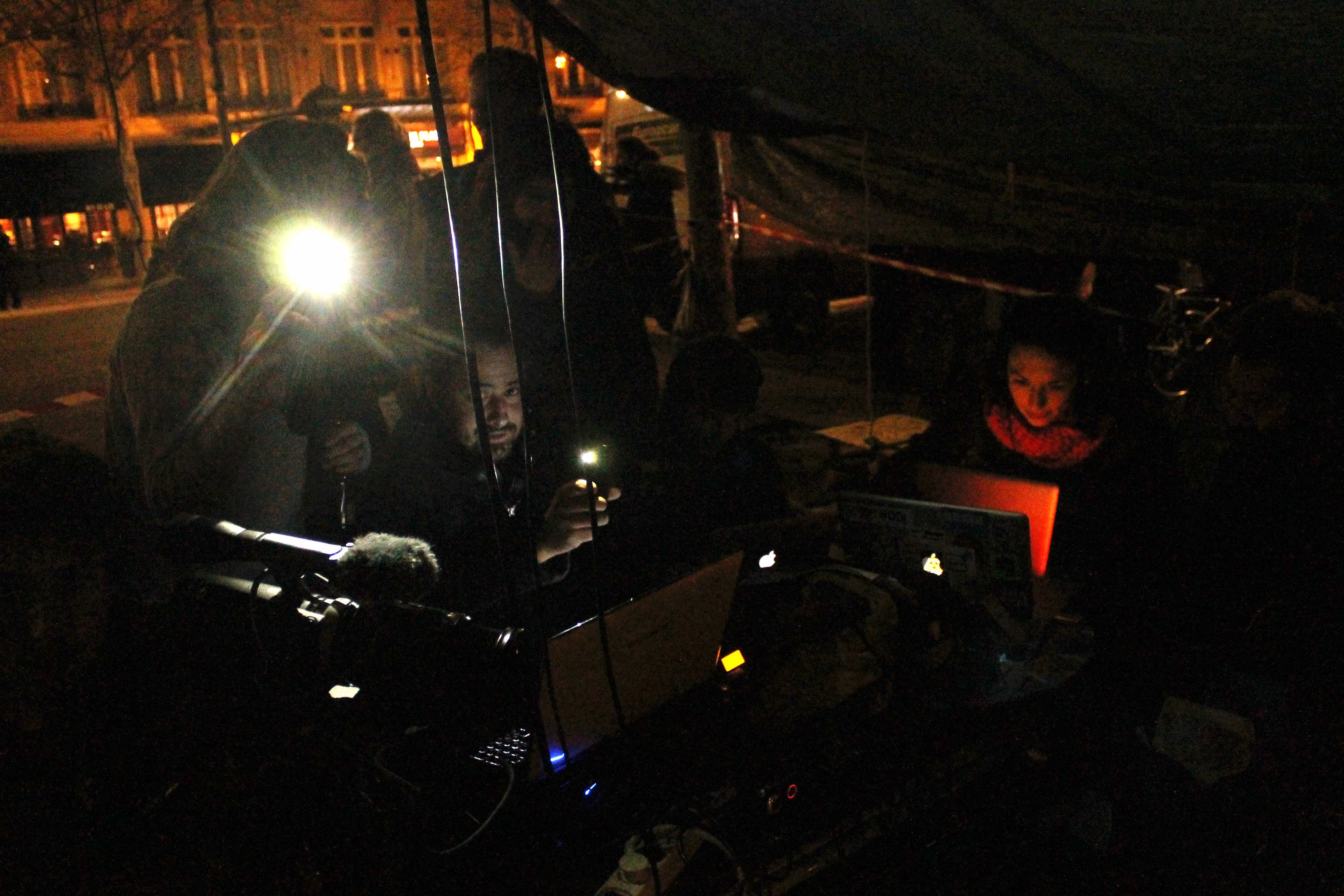 With echoes of Occupy (and May ‘68, even the Paris Commune gets a graffiti shout-out on a building across from the square), a number of different causes have gained momentum at the Republique by coming together under the same flag – Convergence de Luttes. They’re the major organising force behind Nuit Debout.

The catalyst for the action is a new labour law put forward by the French government. The law, dubbed the El Khomri law, after the French Minister of Labour Myriam El Khomri, has already undergone some changes thanks to the pressure of demonstrations across the country.

It doesn’t make for easy reading, but the government has claimed that the intricate changes to their labour code will help reduce unemployment. Critics see the law as favouring big business. For workers, it means the legal working week will go from 35 to 46 hours, it’ll be easier for employers to fire their workers, and unions will have less negotiating power.

Earlier in the day, police had tear-gassed the square, dispersing the protesters in large numbers (a couple of skater’s had shown me pictures of the plumes of smoke wafting over the crowd earlier in the day, explaining how their session had been cut short as well). The French media has done a piss-poor job of covering Nuit Debout, so demonstrators at the Republique are hesitant to speak on record when I ask them about the clashes.

At one point, I almost get bottled by two kids who insist I’ve taken photos and that they need to see my camera – although this feels opportunistic more than anything else. Considering the conveniently placed bottle of wine the teeny-bopper grabs (there’s wine everywhere, and plenty of beer vendors too), at least a portion of the Friday night crowd here has been drinking. 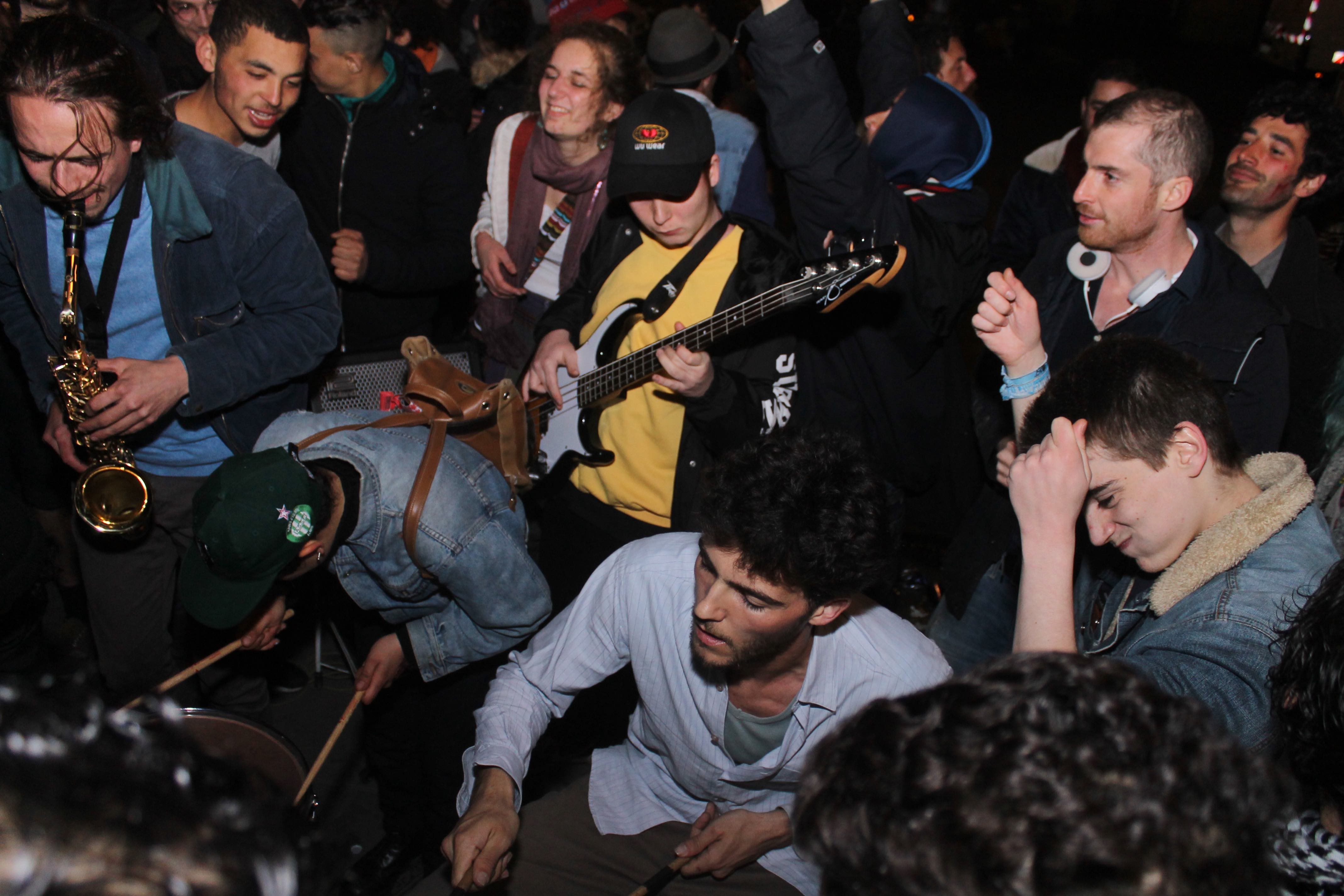 I reach Maziyar Ghiabi a few days later via phone to discuss Nuit Debout. Ghiabi is a PHD researcher in Politics at Oxford University, who’s been doing work at Science Po (The Paris Institute of Political Studies), and had “back and forth on a daily basis”, basically since the protests began at the Republique.

Behind the scenes, students at Science Po have had a big hand in the Nuit Debout demonstrations. “It’s unprecedented. This is a conservative university,” says Ghiabi. “It’s the equivalent of Oxbridge in France, so the students that attend don’t tend to be particularly militant.”

Students dominate these protests – university students, but secondary school as well. There’s a strong anarchist voice within Nuit Debout, Ghiabi tells me, drug decriminalisation activities, a committee for the wellbeing of the homeless in the square, and eco-activists too.

The protesters are emphatically anti-capitalist, and bank windows seem to have a hard time not getting smashed. “This is criminal of course, according to the law, but it is also a political statement, and you can’t ignore it”, says Ghiabi. “All the other shops and buildings are left untouched.” 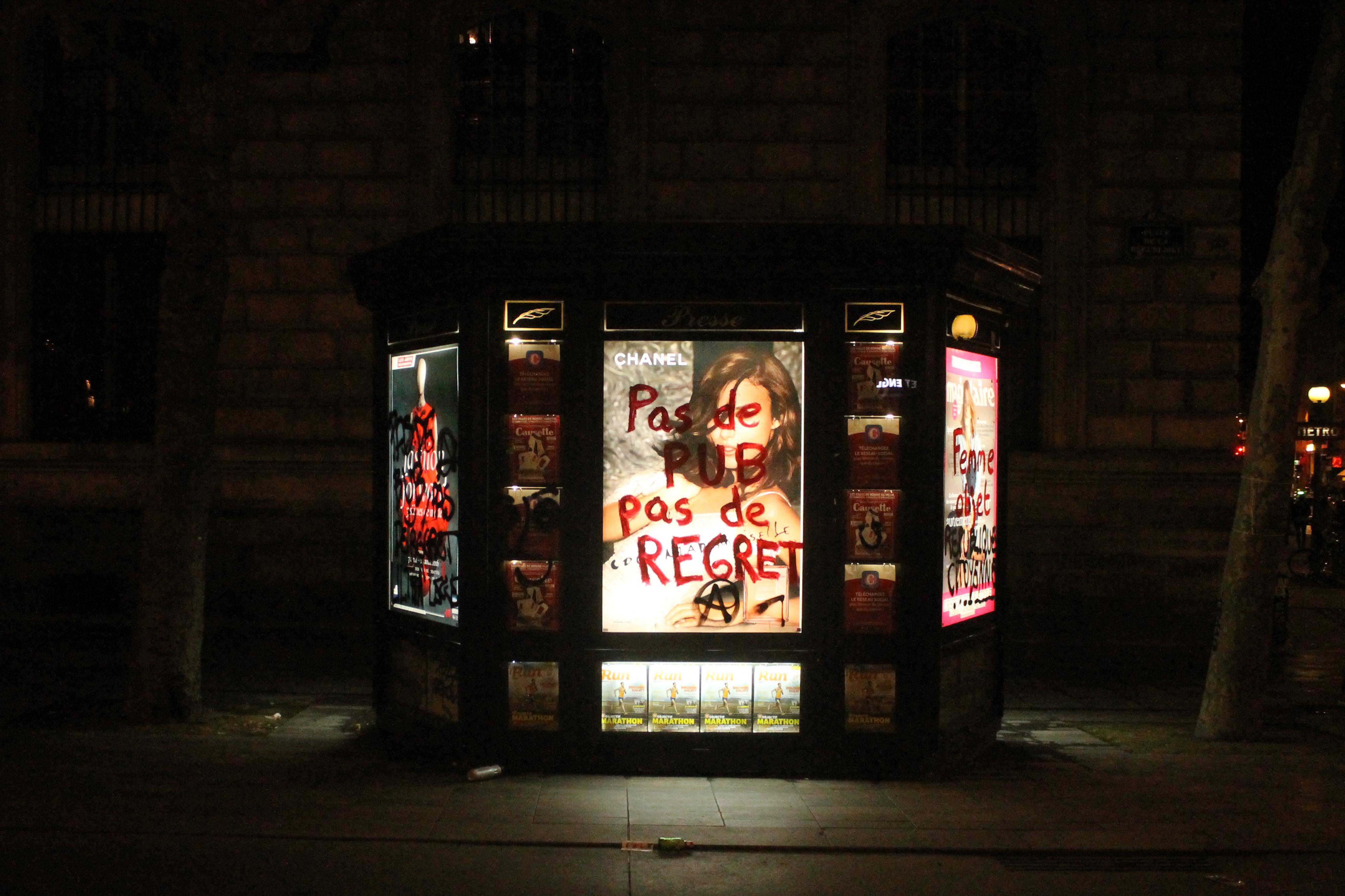 Ghiabi also emphasises the gendered nature of the protests. “There is an overwhelming presence of women in the square. They have a leading role in this movement”, he says.

I ask Ghiabi about Merci Patron! (Thanks Boss!), a documentary film that’s had a huge impact on the protest since it was released last month. The film is directed by François Ruffin, the man  behind the radical journal Fakir who’ve too played a part in this movement.

“They screened it directly in the square in the presence of the director. I mean this is important. The guy is well respected and the film has been a hit.” The film is about Bernard Arnault, the richest man in France, one of the richest people in the world – the chairman of LVMH – Moët Hennessy Louis Vuitton. 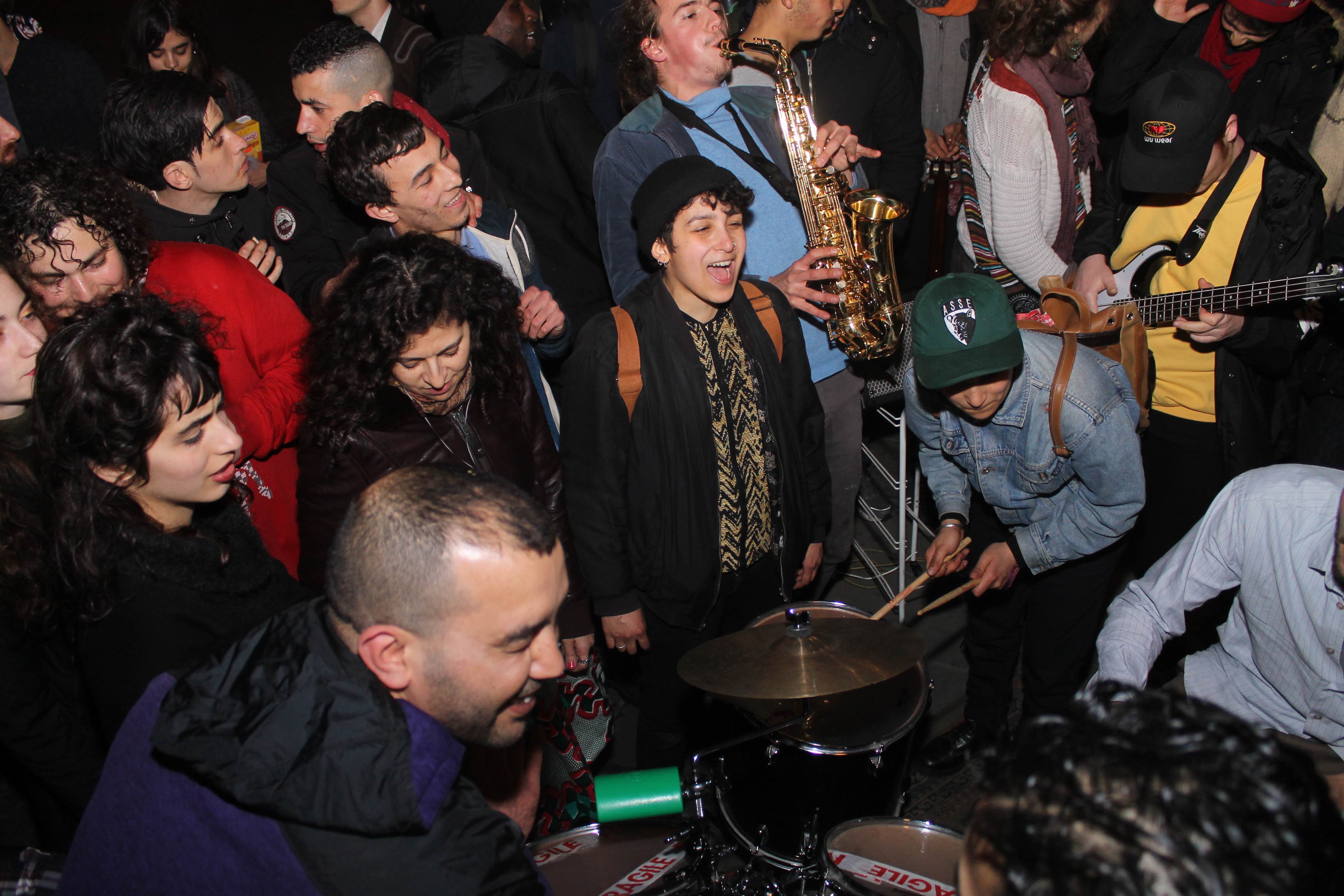 Merci Patron! follows two French factory workers who worked for LVMH producing clothes for the brand Kenzo. They lose their job when the company outsources to Poland, and the couple struggle to make ends meet.

While it’s possible that Ruffin might emerge as the poster-boy for Nuit Debout, France has a long history of collective political upheaval. Activists at the Republique has taken up the task of writing a new constitution – a “Constitution from Below” Ghiabi tells me – which could actually turn out to be a big deal for a country currently in its fifth republic.

Ghiabi points to efforts by organisers to engage young people in Parisian suburbs – the Banlieues – traditionally neglected by political movements. It’s impossible to tell what might happen from this square in the Paris, but if there’s one thing a politically unstable Europe has taught us, it’s that anything is possible.

Linkedin
RELATED ARTICLES
OTHER ARTICLES
Photographer Nico Froehlich’s series documents South London’s diverse communities, while also reflecting on their fragility amid rapid gentrification.
Max Miechowski reflects on documenting land that is being lost to the sea – and the people who live life on the edge.
This afternoon, workers of the hospitality chain came together to call for better pay and working conditions.
We sat down with trans comic Jordan Gray to discuss the power of portraying complex characters, giving humanity the benefit of the doubt and getting naked on live TV.
Proponents of personality tests argue that they’re necessary to find the best person for the job – but in practise, they’re often discriminatory.
The photographer describes taking inspiration from Magnum photographers to craft an intimate and revealing portrait of the city.