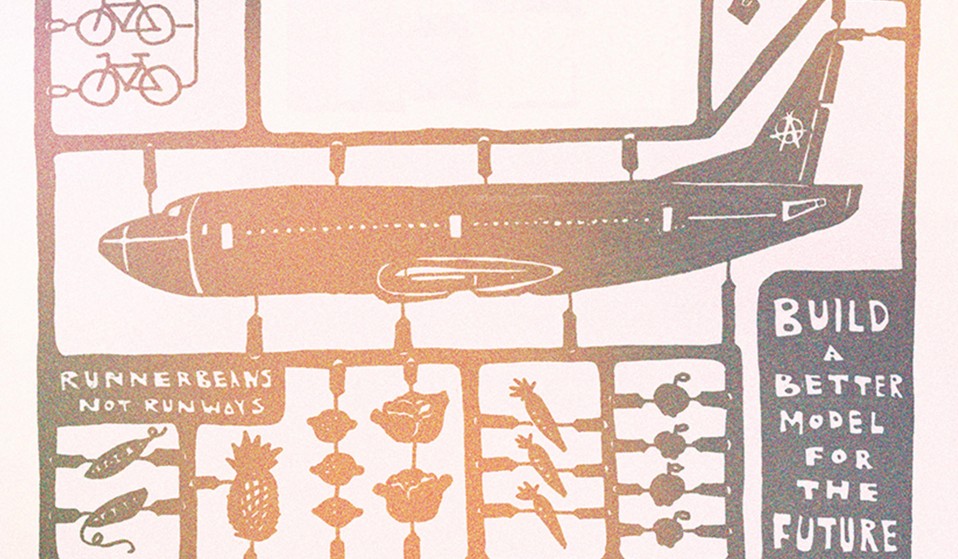 We spoke to Eddie Thacker, a member of Transition Heathrow and one of the #Heathrow13, to look back on six years, and counting, of climate protest in a quiet English village.

It’s been six years to the day since a disused market garden in the small and unassuming village of Sipson, Greater London, became the beating heart of climate activism in the United Kingdom. Proposals to construct a third runway at Heathrow Airport, just a few miles away, would have seen the entire village demolished. The protest site was occupied in response, and has been populated by campaigners non-stop ever since. On its sixth anniversary, Eddie Thacker reflects on what’s been achieved.

“The original occupiers, members of Transition Heathrow, lived here in the villages for six months, investing time into building human relationships. They got to know people living in the area, attending resident group meetings – there was a patient effort to find out what was needed in the local area. A lack of community spaces was one issue identified. Indeed, the reclamation of the abandoned market garden, the site of Grow Heathrow today, was a result of considered communication and at the request of local residents. This derelict and abused plot, which served no purpose for the local area, was transformed into a thriving community space promoting sustainable living.

“When I first arrived at Grow Heathrow, three years later, I was struck by the community’s ethos of self-management.  In this non-hierarchical set-up, no one was instructed to work from a higher authority, or for a financial incentive. Values based in mutual aid and cooperation seemed to underpin everyone’s efforts. People worked at their own will, as it was a cause we all believed in.

“In this we see the fundamental principles of our economic system, the profit motive and individualism, being undermined. In this we see the ideas that underpin the desire for a third runway, economic growth and profit before people, being undermined. Building a third runway is a manifestation of the ideology which seeks to serve the rich few at the expense of life on earth.

“After finishing a Geography degree at the University of Leeds, with pressure of fulfilling social norms, and one eye on the CV, I spent a year in the non-profit sector. I struggled with the underlying notion in this arena that social change would be led by those most connected or qualified. Social change on behalf of everyone else, it wasn’t for me.

“I heard about Transition Heathrow and the Heathrow villages’ resistance to the third runway; the solidarity being built between activists and local residents. Grow Heathrow’s politics seemed open and inclusive to all.

“The primary objective of this place was, and still is, to stop the proposed third runway. However, Grow Heathrow’s purpose has moved past this, exploring values beyond capitalist relations. In providing a permanent space for people to step into this kind of radical politics, the project is incredibly rare.

“Grow Heathrow is a dynamic space; a social centre where individuals from around world come and visit for a day, weeks, months, some even end up living here for years. Every week is different, the energy and skill-set each individual carries with them influences the nature and productivity of the space.

“This last year, with Heathrow’s third runway back in the limelight, there’s been an emergence of energy and support given to local groups resisting the destructive proposals. We’ve seen more creative, inclusive direct action side by side with local residents. Grow Heathrow has stood in solidarity with local residents and Plane Stupid activists who have, more than once, blocked the tunnel leading into Heathrow’s terminals, or occupied their runway.

“Grow Heathrow is a community space, offering workshops in organic food production, bicycle mechanics and renewable energy. This year residents have delivered workshops on global citizenship and sustainable living in local schools and youth centres. Nonetheless, we’ve seen the project at times under considerable police surveillance. A rare and precious autonomous space in London, unknown and relatively out of the control of authorities, residents at Grow Heathrow hope they can avoid what would be a second police raid in the project’s history.

“I was one of the Heathrow 13; we were told to expect time in prison for chaining ourselves to the runway on Heathrow’s northern runway in July 2015, causing 25 flights to be cancelled. We did it to highlight the urgent need for action on climate change. Heathrow’s emissions are killing people in the local community I’m part of, and around the globe. Already it is the second largest source of carbon in the country, and a third runway would amount to as much carbon emissions as the entirety of Kenya . How are we to stay within the safe to degree warming of the planet, which scientists warn us we must do, while building more runways?

“Moreover, our action underlines that once more it will be ordinary people, local residents, taking politics into therr own hands, that will halt plans to devastate the planet. When our political leaders betray their promises, what else can we expect? Our democratic system is broken. We are the change we’ve been waiting for. With the momentum that has been built, there will only be a continuation of direct action, an escalation on this march towards climate justice.

“This weekend we’ll celebrate six years of Grow Heathrow’s existence, with workshops, food, music and dancing. It’s our chance to bring the Heathrow villages together, a chance to celebrate our resistance, and the hundreds of individuals who have made Grow Heathrow a reality.”