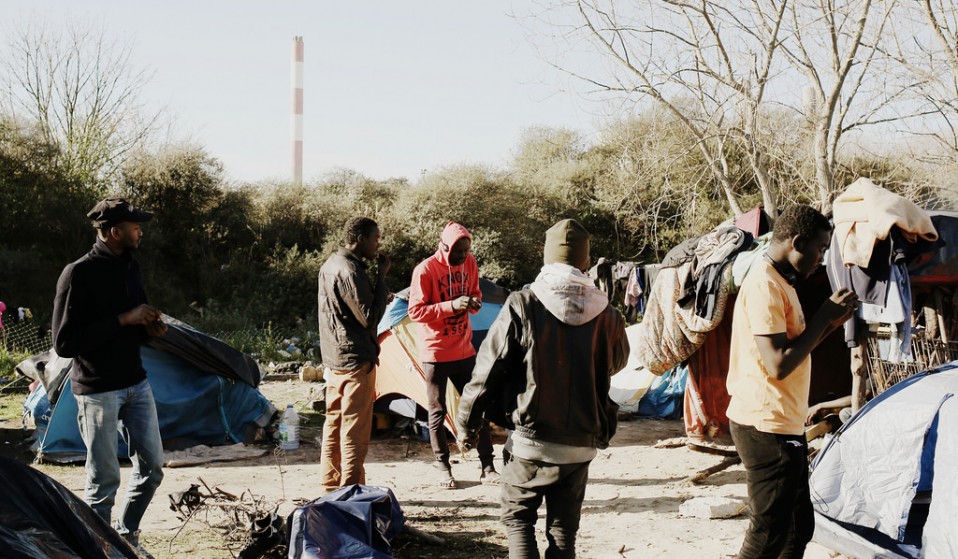 The lack of government humanitarian support and incendiary media coverage has prompted ordinary people to go to Calais and help out any way they know how.

The lack of government humanitarian support and incendiary media coverage has prompted ordinary people to go to Calais and help out any way they know how.

As the refugee crisis at Calais continues, the lack of humanitarian response from the British and French governments is prompting people to take matters into their own hands. Growing numbers are doing what they can to help the estimated 5,000 people, mostly from war-torn countries like Syria, Afghanistan and Iraq, now believed to be living in the outskirts of the French port.

Tensions peaked in mid-July when over 2,000 attempts to enter the Eurotunnel terminal were being made per night. The deteriorating situation has drawn an outraged response from British media and politicians, but largely because holidaymakers have been delayed and traffic jams have appeared on motorways in Kent. British prime minister David Cameron echoed the dehumanising tone of much media coverage when he referred to a “swarm” of migrants.

Unlike the British government, who’ve chosen to shelter from their moral obligations behind miles of razor wire and the English channel, ordinary people with little experience of humanitarian work have chosen to help out in their own way. UKHIP (not to be confused with UKIP) made news in February when they launched a “D-Day-style flotilla of solidarity” which took advantage of the Daily Mail’s £1 ferry offer to take supplies to “The Jungle” refugee camp.

People from both sides of the channel have helped build shelters or launched crowdfunding campaigns to fill up vans with everything from food to sanitary products to bicycles and deliver them to Calais. Even Songs of Praise broadcast an episode from the makeshift St Michaels church at the camp.

Critical Mass to Calais: Bikes Beyond Borders is the latest effort hoping to provide solidarity and support. Hundreds of cyclists will leave London on August bank holiday weekend, riding bikes they plan to donate to refugees, along with food, clothing, tents and other supplies.

Claire Donaldson came up with idea with her friends Sarah and Nicola. But she points out they just planted the seed: in true Critical Mass style there are no leaders or organisers. “We’re not telling anyone what to do at all – everyone is riding for their own reasons,” she explains. “We simply had the idea, made it public and are hoping as many people as possible feel the same way and join us.”

Politicians have long-used the Calais crisis as a political football. But with journalists, choir singers and now cyclists descending on the camp, is there a risk of The Jungle being turned into a circus, with refugees’ needs being overlooked?

“The fact that there is a need for one thing doesn’t mean there is not a need for anything else, and needs change all the time depending on what is most available on the ground,” Claire explains. “We’re trying to help in the most practical way possible. Bikes are something our group is involved with so it made sense use our contacts and gather momentum on a grassroots level.”

“People volunteering in Calais tell us that there is a massive demand for bikes,” she continues. “The inspiration for the ride was simply to create a tangible form of help as well as a tool for connection. Hopefully the bikes will be used for migrants living in the camps to connect with each other and gain access to amenities such as food and healthcare in the closest town which is seven kilometres away. With luck, they might improve their physical and mental health while suffering through a very difficult time simply by enjoying the joys of cycling.”

The group are collecting other useful items like shoes, coats, bedding, tents and tools, which will be carried on bikes or in support vehicles. They’ve also launched a crowdfunding campaign to buy more supplies.

But David Charles, who’s behind UKHIP and taking part in the Bikes Beyond Borders ride, says focussing on the material misses an important layer to gestures of support. “For me, this bike trip isn’t about what the migrants “need” or being a humanitarian mission or any sort of charity, it’s about forming connections between different people,” he explains. “This connection is the most important thing for me and it stems from the fact that no one can say what any other human being “needs” – what do I need? I’m not even sure I know myself. The people who live in Calais are hugely resourceful; one more tent here or there is far, far less important than the smiles and stories that one more human connection can provide – on both sides of the interaction.”

“Whenever I have gone to Calais, I have always learnt and discovered far more about the world and myself than I feel I have contributed, yes, even when I brought over a huge van of tents and sleeping bags,” he continues. “Everyone I have seen go to Calais has returned with a more nuanced impression of Calais, of migration in general and in particular, deep memories of the people they met. Those impressions and memories will hold far stronger than a barrage of bigoted media coverage. Be there! That’s my motto!”

Find out more about Critical Mass to Calais: Bikes Beyond Borders on August 29-31, get involved or donate to the crowdfunding drive for supplies.

If you’re thinking of showing support in your own way, it’s a good idea to contact Calais Migrant Solidarity beforehand. They work in the area and can advise on which items will be of the greatest benefit to refugees around Calais.

Linkedin
RELATED ARTICLES
OTHER ARTICLES
Photographer Mathias Depardon has spent years tracking migration across Europe for his Beyond The Borders project. We asked for his perspective on recent events around Calais.
A collection of stories shining a light on the personal experiences of migrants, the very people who threaten to be overlooked in the debate on immigration.
Carlos Spottorno goes beyond the border to capture a picture of immigration few people choose to see.