News & Politics / Activism / On the frontlines with Germany’s eco-activists 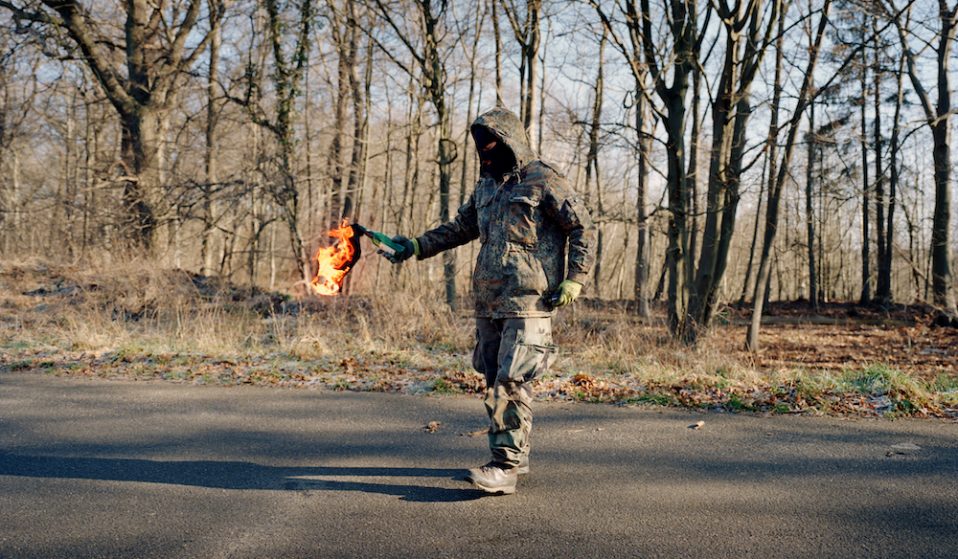 Deep within a forest on the outskirts of Germany, a small army of activists is fighting to protect a 12,000-year-old natural resource.

Deep within a forest on the outskirts of Germany, a small army of activists is fighting to protect a 12,000-year-old natural resource from being destroyed. As photographer Néha Hirve found out, it’s a battle that feels like waiting for the end of the world to come.

Germany’s Hambach Forest is home to a group of eco-activists fighting against the country’s biggest power company, RWE. The threat of a neighbouring lignite mine being expanded looms closer as more and more trees are cut down every year. I first heard of these “treehouse-living” anarchists while developing a project on another alternative, off-grid community that focused on replanting forests in India. Since 2012, the Hambach protesters have been waiting it out until ‘Day X’ – the inevitable moment they would be evicted, their treehouse homes destroyed by police, and the last piece of forest cut down forever. Something about that image stayed with me. So in December 2017, when the same person informed me that the Hambach Forest occupation might not exist for much longer, I felt a sudden urge to leave for Germany.

I’m naturally drawn to subcultures and groups that don’t quite fit into the mainstream. I guess it’s because I’ve always felt somewhat a misfit or outsider in conventional Western society myself. As someone who grew up in India, the US and Switzerland, I have lots of questions about how we’re supposed to live our lives and I use photography as an attempt to come to terms with what I see. 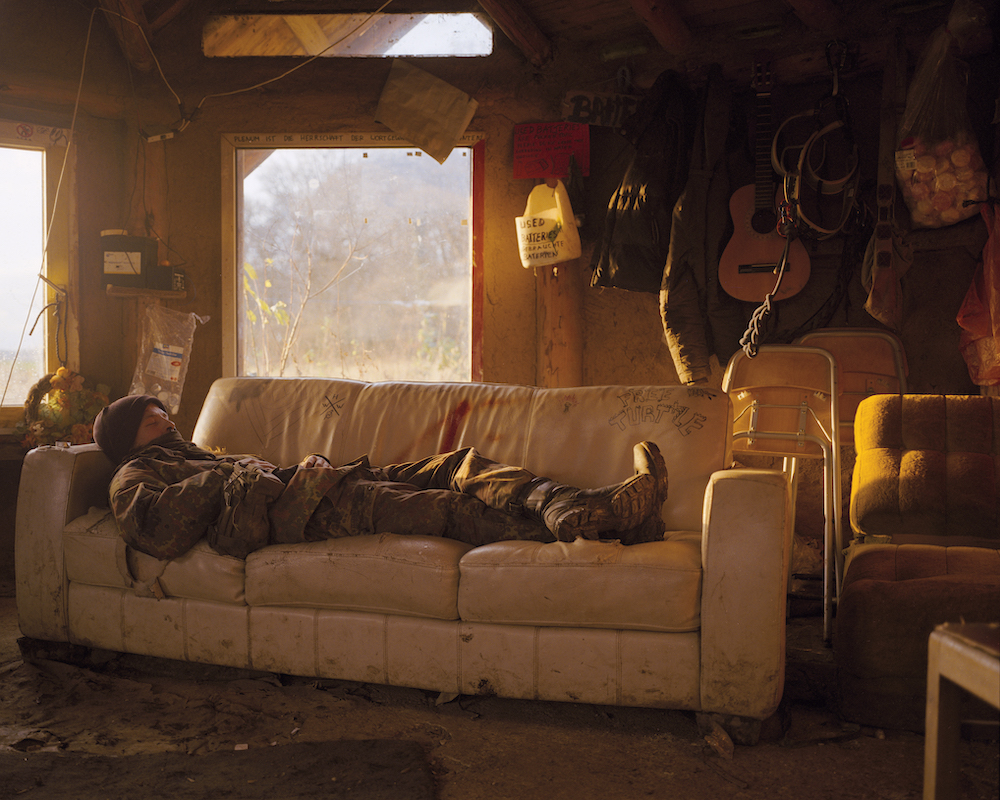 When I eventually arrived at the edge of Hambach Forest – woods situated between the cities of Cologne and Aachen – it was already dark. With some horribly vague directions, I ended up spending the night in the first structure I found that had some light inside. It was also winter, which meant that accessing basic necessities suddenly became challenging. Water and food would freeze. If the solar panels didn’t work, there’d be no electricity. Simple things, like gas to cook and wood for fire, couldn’t be taken for granted. It turns out that everything is more complicated when you’re living in a treehouse – even cleaning out a chimney becomes a whole-day affair.

Gaining peoples’ trust proved hard at first. Those who did gradually let me in were still afraid of their faces being recognised or seen by police, as many of them had been arrested before. Even then, I wasn’t sure where the project was going until I found an old gas mask on site. It had been ‘donated’ by an eccentric army veteran in case the world collapsed. I asked one of the activists to pose with the mask if he wanted to hide his face, and that’s when things fell into place. I ran with this thread of an impending apocalypse, evoking the mythical ‘Day X’ that everyone kept talking about. Using the likes of found masks allowed me to collaborate with the subjects in an almost tongue-in-cheek approach, subverting how the media sometimes labelled them as dangerous terrorists.

The group was, by and large, sincere in their cause to stop the coal mine and save the forest – and they were willing to endure a lot for it. Behind a tough exterior were good, kind people who cared about each other. And although the activists do not operate under an official title, the phrase ‘Hambi bleibt’ (‘Hambi stays’) encompasses the cause they stand for. It became a hashtag but also a way to say goodbye to each other – something much more than just a slogan. 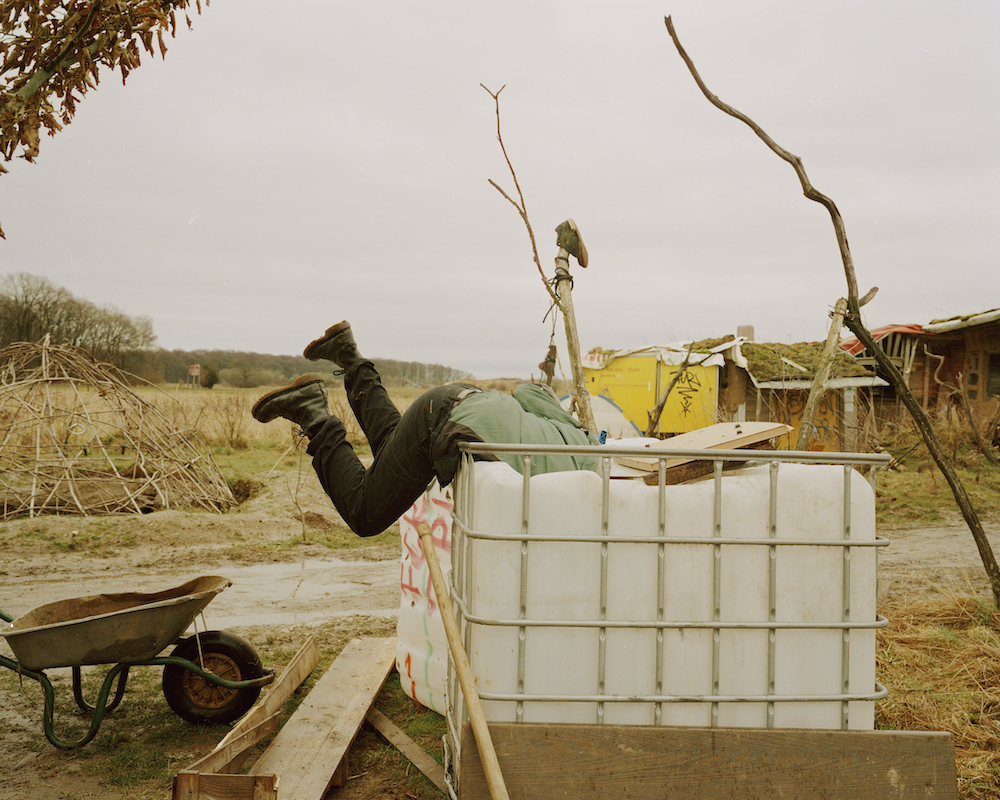 Over the course of a year, I visited the occupation several times. There was no big battle scene to be found, just the slow tedium of constant struggle. Treehouses were built and evicted every few months. People came and went. In between arrests and clashes, there was a lot of waiting around for the end of the world.

In a Light that is Leaving started out as a story about that waiting. But on 13 September 2018, the apocalypse that activists had been preparing for finally arrived. The police began a massive eviction of the area in what has been estimated as one of the largest and longest operations in the state of North-Rhine Westphalia. I went back as soon as I heard, finding a completely different forest from the one I’d got to know. The majority of activists had locked themselves into treehouses, drawn up the ladders and ropes, and were resisting arrest as long as they could. Two people even chained themselves deep in an underground tunnel. A line of police surrounded the forest to keep civilians from entering the area which, at one point, was declared a danger zone. Nighttime saw authorities flooding the forest with light so they could see any movement. It all made for a bizarre scene, especially since there was so little activity.

On 5 October, the clearance was halted again – but Hambach’s future remains uncertain. There is just 10 per cent left of what was once a 12,000-year-old natural resource. In the time since then, In a Light that is Leaving has started to feel more like a reflection of the frustration that comes with seeing the state of everything around us – when it’s no longer enough to share a Facebook link or simply stand in the street with a protest sign. It makes me wonder what else do we have, if not our need to keep fighting in the face of the end of the world? And why must we wait for the end of the world before we act? 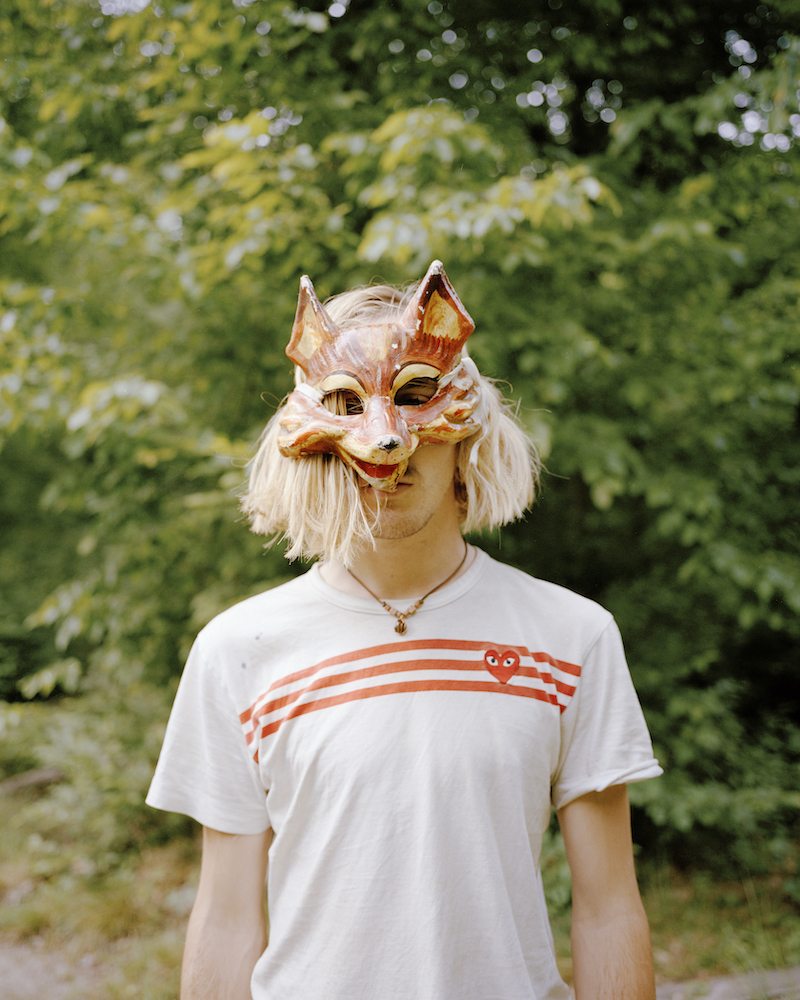 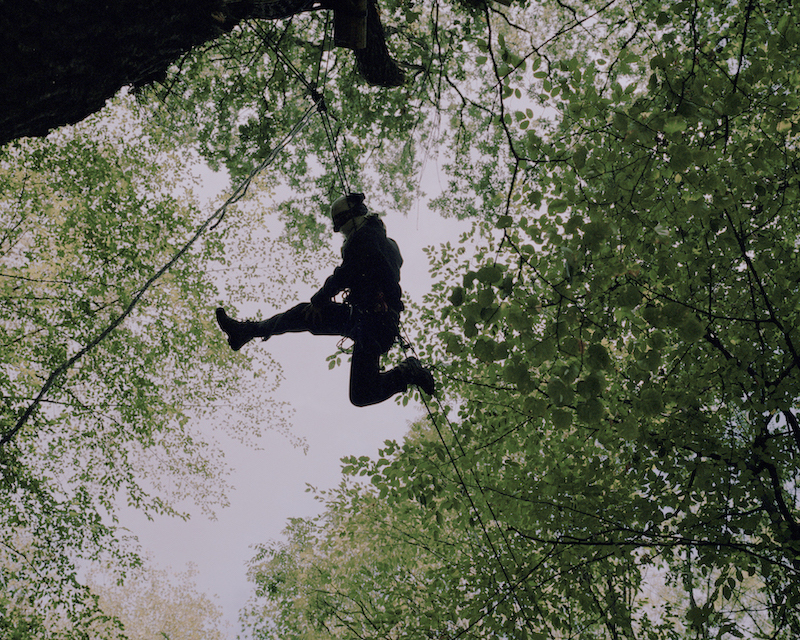 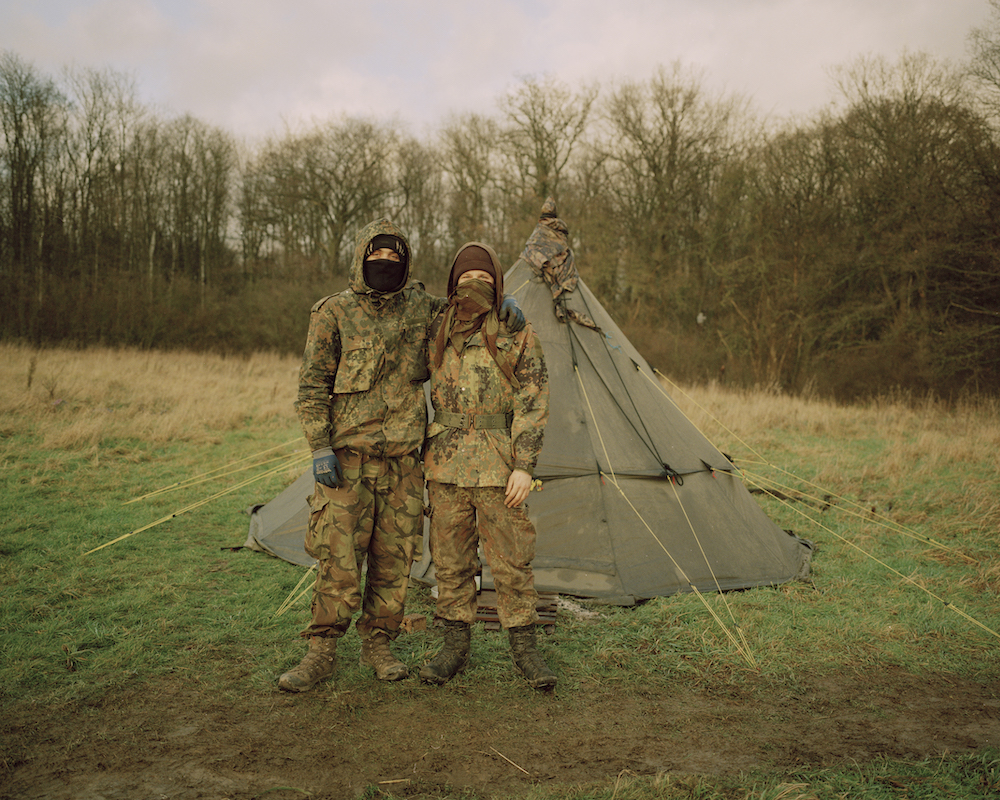 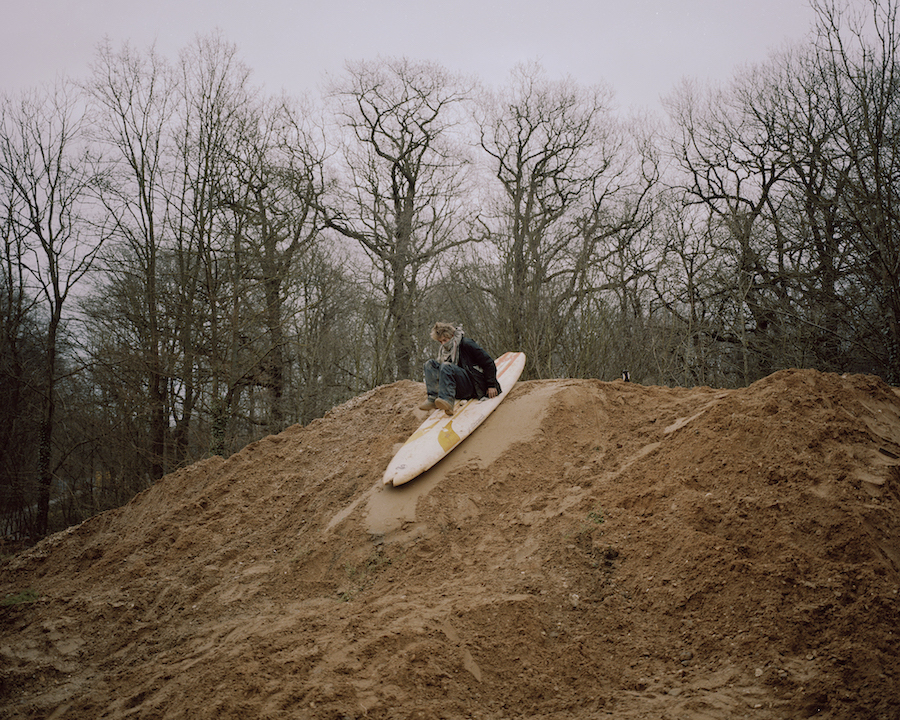 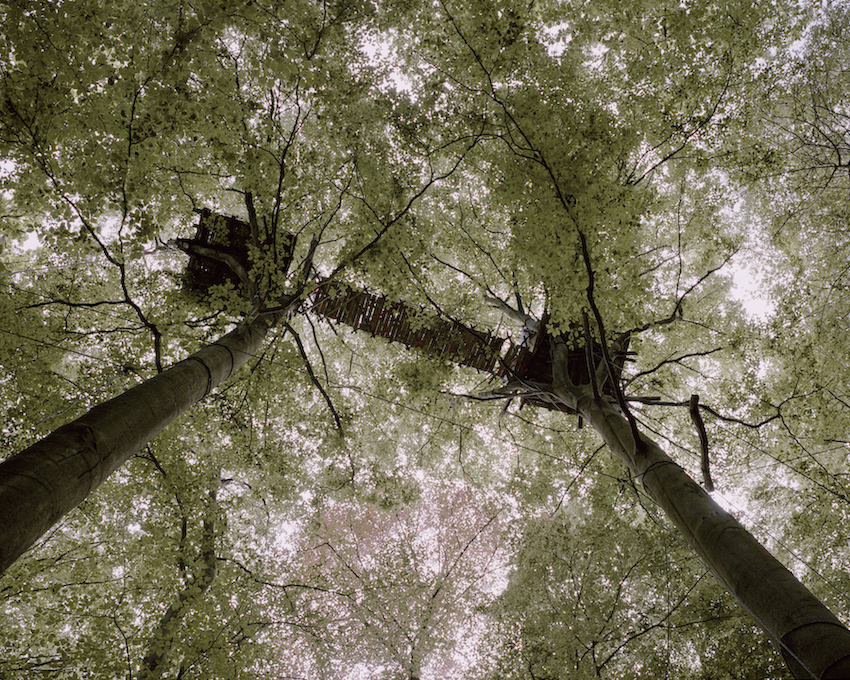 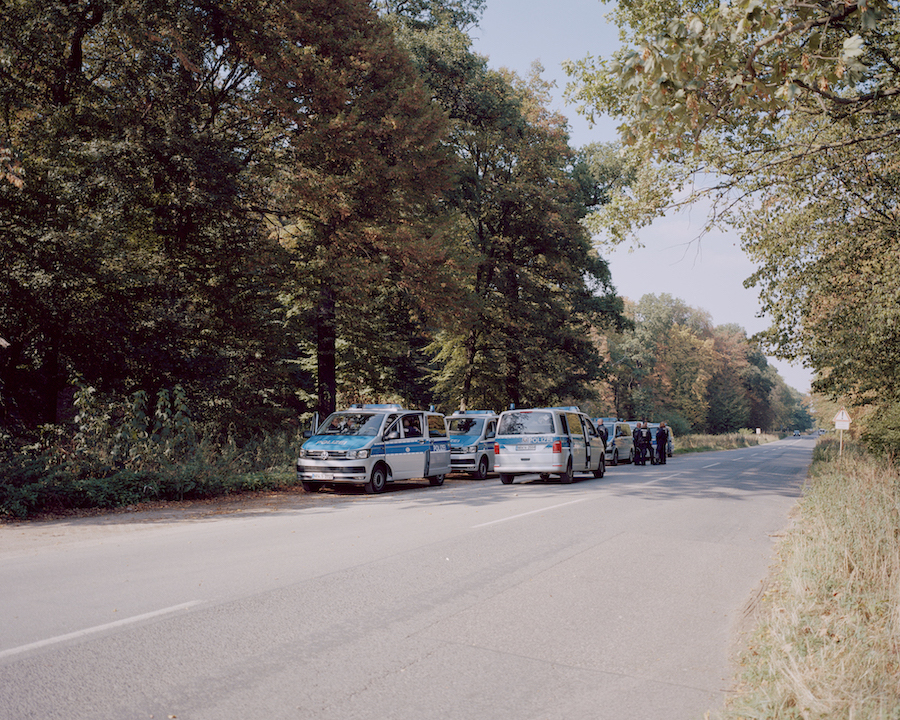 Linkedin
RELATED ARTICLES
OTHER ARTICLES
Hundreds gathered together to protest the policing bill by making as much of a racket as possible.
Leading art critic Robert Storr reflects on the photographers – from Seydou Keïta, to Malick Sidibé, to Carrie Mae Weems – who helped to transform and redefine the medium.
In 1984, Martin Shakeshaft set out to document the miner’s strike as it really happened, using his photography as a tool for activism.
Ahead of the policing bill reaching its final stages in the Lords, protestors came together to rally against the legislation.
In the UK, Hongkongers are continuing to stand in solidarity with the pro-democracy movement.
From Brooklyn gang members, to Welsh miners and the residents of East Harlem, Bruce Davidson used his camera to shine a light on the most marginalised.