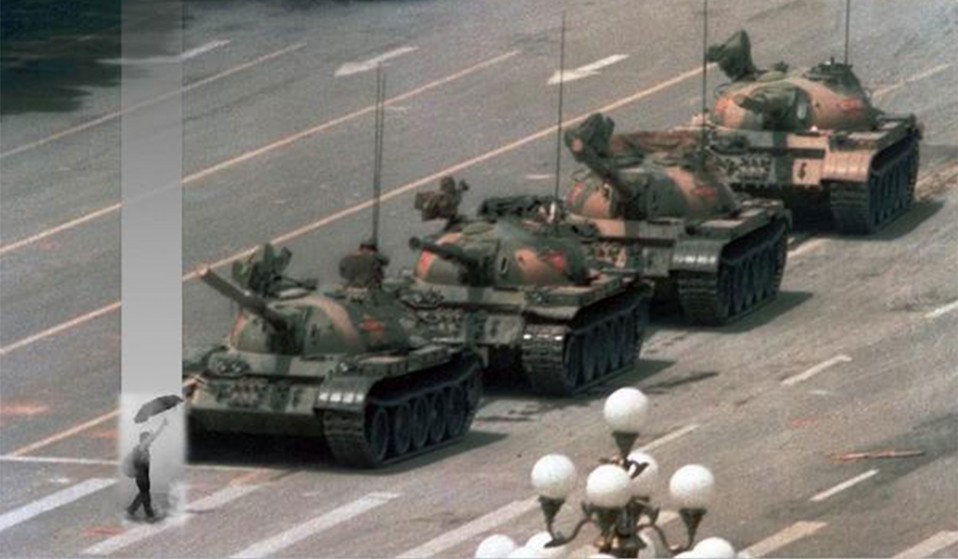 Louisa Lim on comparisons between the Hong Kong and Tiananmen protests.

"People's Republic of Amnesia" author Louisa Lim on Umbrella Man and Tank Man and how the spirit of Tiananmen Square has influenced the Hong Kong pro-democracy protests.

Tens of thousands of pro-democracy protesters brought central Hong Kong to a standstill over the weekend, prompting police to fire tear gas into the crowds of unarmed demonstrators. Instead of dispersing them, the police response galvanised Hong Kongers and encouraged a wider cross-section of society to join the protests, which began with a classroom walk-out by students last week.

The protests are calling for Hong Kong’s chief executive CY Leung to resign and for Beijing to repeal rules that effectively bar any democratic candidate from running in the territory’s next elections in 2017. The protests are also one of the biggest open challenges to Beijing since the Tiananmen Square protests 25 years ago where students pressed China’s ruling Communist Party to be more democratic.

Beijing crushed the 1989 protests and censors successfully covered up the crackdown, erasing it from the Chinese mainland’s collective memory. But in Hong Kong memories of 1989 remain strong and are an influence on the current protests. We asked Louisa Lim, the author of “The People’s Republic of Amnesia: Tiananmen Revisited“ how the spirit of the Tiananmen Square protests have influenced what’s happening now on the streets of Hong Kong.

Unlike most of their counterparts on the mainland, the Hong Kong youth who are demonsrating know the history of the Tiananmen protests well. How do you think that affects their resolve?
It is no coincidence that Hong Kong’s students launched their class boycott beside a replica of the Goddess of Democracy that once towered over Tiananmen Square. By this act, those students were placing themselves as the latest in a long tradition of intellectual activists, whose historic mission is to take a moral stance at a particular moment in the country’s history. I think the fact that Hong Kong’s protesters know the history of the Tiananmen protests also underlines the uniqueness of their identity. They know the knowledge of what happened in 1989 is forgotten or suppressed on the mainland, and Hong Kong is the only place on Chinese soil where annual vigils are held on June 4th year.

The protestors’ primary demand is for full democracy in electing their own chief executive, instead of picking from candidates approved by Beijing.

But underlying that is another driver, which is the necessity of protecting Hong Kongers’ own rights and identity. That is why some of the protestors, facing off against riot police, were simply shouting, “Hong Kong people! Hong Kong people!”

People have already begun comparing the “Umbrella Man”— the news photo of a man surrounded by clouds of tear gas and police in riot gear — to the historic Tiananmen “Tank Man” photo. What do you think of that comparison? And how powerful can an image like that be?
The picture of Umbrella Man is a stunning image, showing a young man dressed in black, surrounded in a miasma of teargas, his arms raised. He holds a tattered umbrella high above his head, which does nothing to protect him from the fumes.

His vulnerability is clear, especially in contrast with the semi-circle of riot police surrounding him, all wearing fluorescent yellow vests and space-age protective helmets. His stance radiates self-confidence, perhaps reflecting the protestors’ sense of moral rectitude; they want Beijing to allow them universal suffrage in selecting their Chief Executive. It’s a very powerful image, yet it still doesn’t quite have the gut-punch of Tank Man, who is literally putting his life on the line.

I would say a closer comparison would be the image of the Woman in Red, a young woman in a red dress being tear-gassed by police during the Gezi protests in Istanbul in 2013. That image went viral, and was endlessly shared on social media, reproduced in cartoons and graffiti, and she became seen as the face of the anti-government movement. In one iteration of the picture, she appears much larger than the policeman, next to the words, “The More You Spray, the Bigger We Get.”

Do you think the Hong Kong protesters expect authorities to respond differently than Beijing did in 1989?
Few believe that the Hong Kong authorities would bring in tanks and open live fire on protestors in the territory. Indeed, the Hong Kong government itself has emphasised that it has no intention of asking the People’s Liberation Army for help.

To look for a precedent, I would look back to July, when students held a sit-in that was deemed as illegal. Then police arrested 511 people on charges of illegal assembly and obstructing police work. Amnesty International criticized the police action as having been unnecessary, and said the assembly was “a peaceful and legitimate protest under international law.” But I believe that set the tone for the type of response we are now seeing, one that delivers a very firm message that such assemblies will not be countenanced.

But that being said, the situation is very volatile, with so many people on the streets, and the local authorities’ response so far has not been encouraging. This is the biggest political crisis that the Chinese authorities have faced in Hong Kong since the handover in 1997, and there are real dangers it could spiral further out of control.

Who on social media do you recommend following to keep track of the protests?
The @OCLPHK account is run by Occupy Central with Love and Peace, the civil disobedience movement that launched mass protests this weekend.

I would also suggest following @joshuawong1013, although he often tweets in Chinese, he is the 17-year old leader of Scholarism, the student movement that spearheaded a weeklong class boycott.

@VarsityCUHK are a group of young journalism students who are doing a great job of live-tweeting events.

Also, a local newspaper, Apple Daily, has a livefeed up:

Louisa Lim was based in China for the past decade as a correspondent for NPR and the BBC and is now visiting professor of journalism at the University of Michigan. Her book, “The People’s Republic of Amnesia,” is available here. Follow her on @limlouisa.

Linkedin
RELATED ARTICLES
OTHER ARTICLES
Rhiannon Adam spent three months capturing an ageing society wracked by division, isolation, and the aftermath of scandal.
Financial turmoil is pushing people who work in the sex industry into more dangerous and desperate situations as a means of survival.
Thousands attended the annual event this year to wheelie through the city and call for ‘knives down, bikes up’.
By turning a real-life crisis into daytime television fodder, TV bosses have once again shown themselves to be completely out of touch with audiences.
Birdy Chu reflects on documenting the historic moment in which the territory was formally passed back from the UK to China.
A new project is documenting formerly incarcerated people as they transition back into civilian life.