A group of local residents in Haringey, North London, are defying private property developers by bidding for an old hospital site that's for sale. Does this signal a new direction for housing activism in the capital? One that looks at the needs of a community not simply the bottom line?

A group of local residents in Haringey, North London, are defying private property developers by bidding for an old hospital site that's for sale. Does this signal a new direction for housing activism in the capital? One that looks at the needs of a community not simply the bottom line?

In the last couple of years there have been a series of iconic protests in response to London’s calamitous housing crisis. From the Sweet’s Way Resists campaign to Focus E15, activists have fought against the woeful record of private property developers and local authorities to provide more affordable homes and defend social housing.

But rather than continue to simply protest against these failures, local residents who make up the St Ann’s Redevelopment Trust (StART) in Haringey, North London, have decided to take matters into their own hands.

“It genuinely feels like it’s an opportunity for the community to take control when it comes to housing”, explains Anna, a 22 -year-old member of StART who grew up in Haringey. “That’s the great thing about StART, it’s a positive vision forward.”

Opened in 1892, the St Ann’s hospital was at first used to treat people with scarlet fever, and was absorbed into the National Health Service in 1948 when the NHS was founded. Today the 11.4 hectare site is set to be split up, with two thirds of it due to be sold off to developers.

StART are now directly competing with private property developers, and putting together a bid to acquire the land that’s up for grabs. Originally the site was due to be sold for private development, with only 14% of the proposed new homes to be classed as “affordable” (although in reality what affordable in London means remains unclear).

According to London’s Poverty Profile, Haringey had the second highest rate of households in temporary accommodation across all London boroughs (27.2 per 1,000) in March 2015, while just over a quarter (26%) of residents are low paid, the fifth highest rate among London boroughs. Members of StART recognised pretty quickly that 14% of homes being affordable meant that 86% would be unaffordable, and this just wasn’t good enough. 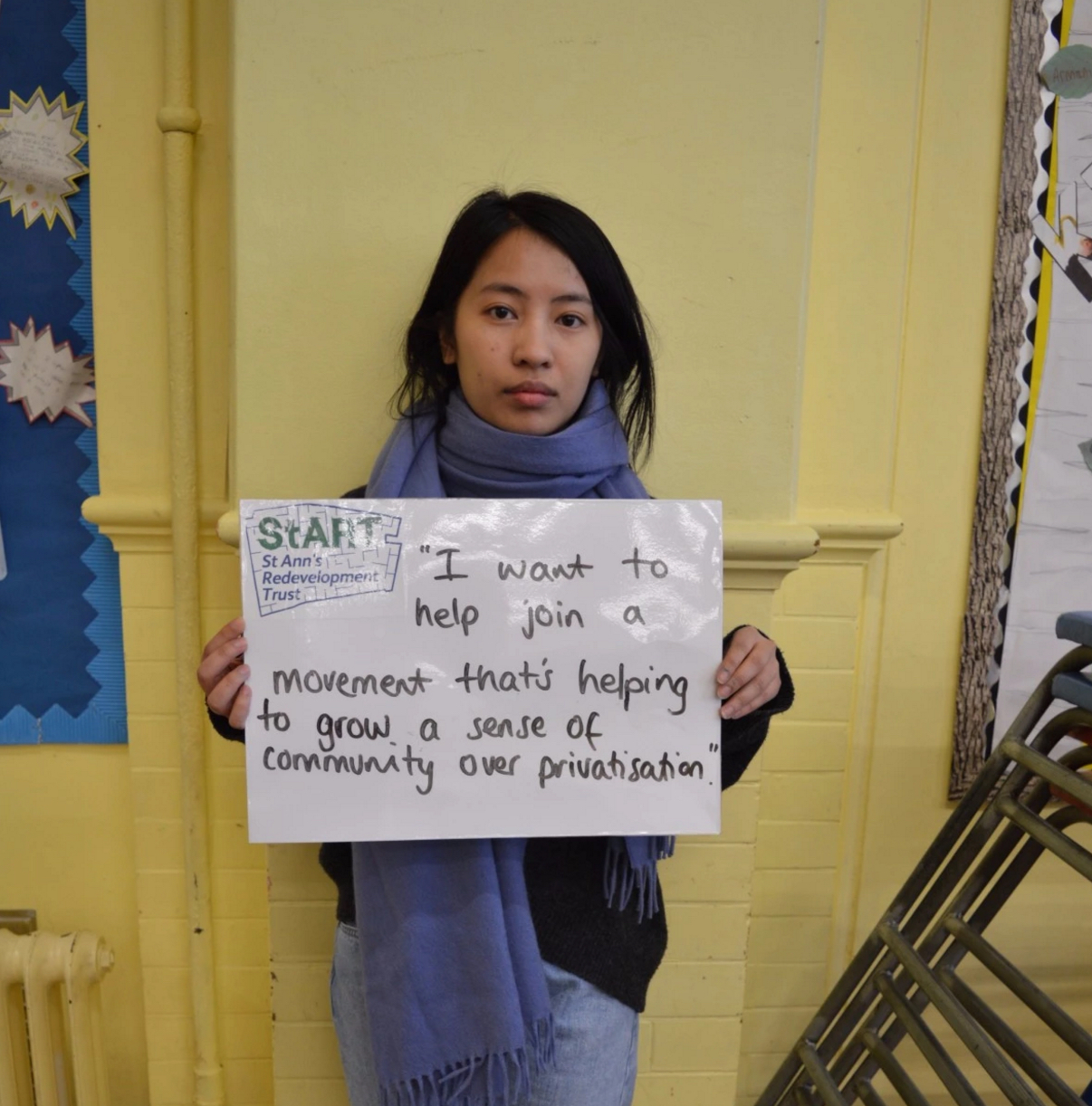 Anna talks about her experience returning to Haringey after studying at university,  seeing her friends and their families being priced out of the area they’d called home. “It leaves you feeling very vulnerable, it’s not like you have the choice of being able to stay in the community you grew up in”, she reflects.

Seb, another member of StART who has lived in the area for 10 years and works for a housing charity, recognises that a lack of affordable housing is breaking up the local community. “Haringey has always been a mixed, multicultural borough. A lot of the regeneration programmes aren’t retaining the mixed communities that have characterised London for a long time.”

Instead StART want to create a community-led housing development, rather than allow big property developers to dictate the supply of housing. They held consultation events with hundreds of locals to determine what the community actually wanted from a housing development, rather than getting what was forced on them by those looking to make cold hard cash. 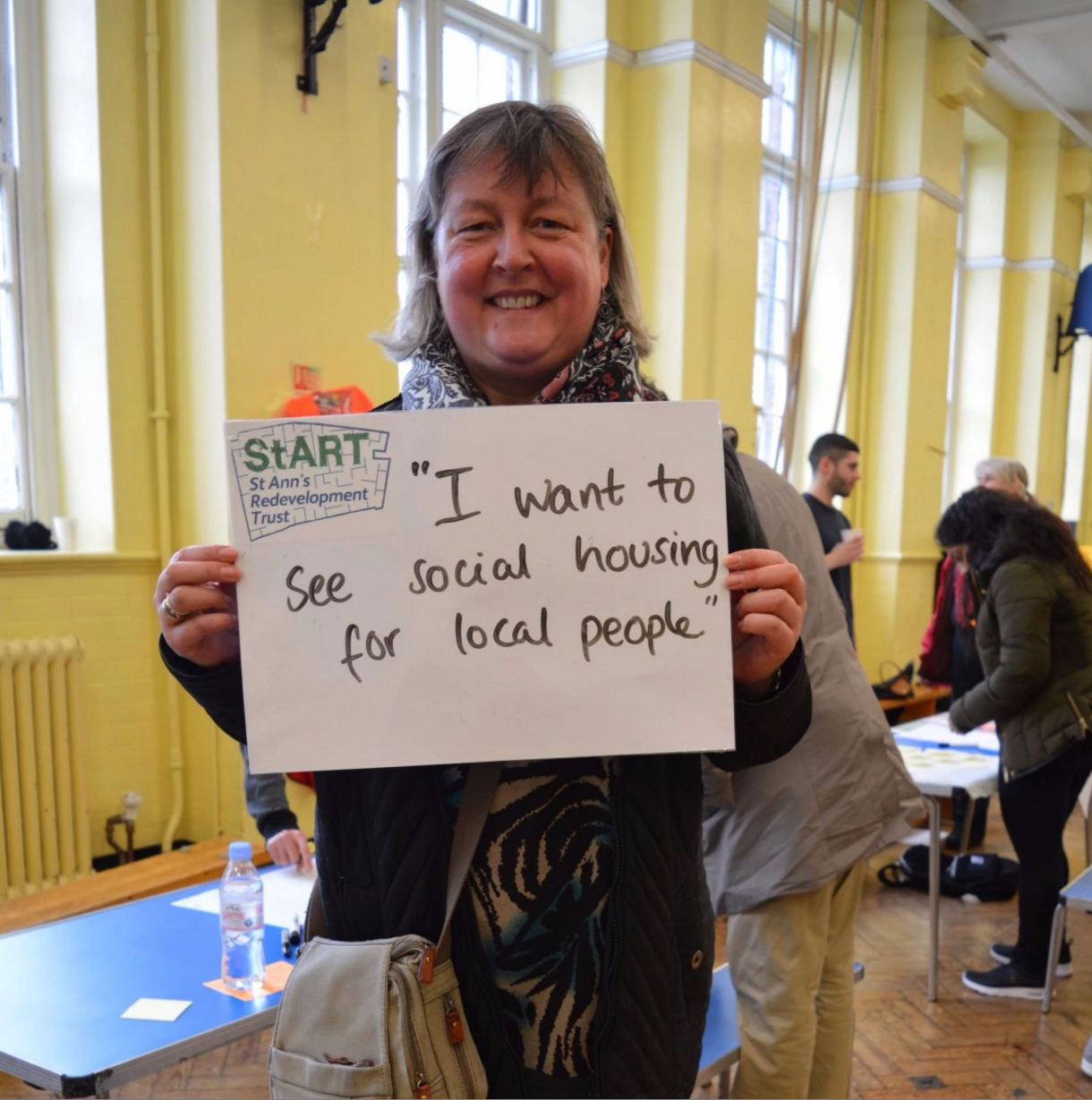 Based on the views of locals, StART want to ensure that far more affordable houses are built on the St Ann’s site, and see green spaces created and maintained for use by the whole community, not just future residents. They also want to support the existing mental health services that will run from the rest of the hospital site that’s not for sale.

“Community-led developments really look more imaginatively at the site as a whole and think about how it fits in with the community”, Seb explains. “You realise that you can completely sidestep the average developer model that is just looking to maximise profits.”

Benefiting the whole community, rather than just those who happen to live in the property development, is a main focus of StART. Some of the members of StART already have a secure living situation, yet feel that a community-led development will be a great asset to Haringey. Alice, a radio producer who owns a flat in Haringey argues, “it shouldn’t be the case that just because you have a mortgage you can’t contribute to the discussion about affordable housing- London is not sustainable if it cannot support the people and the workers that support it.”

For a group run entirely by volunteers, StART have been remarkably successful so far. The group has significantly grown in size since holding their first public consultation in July 2015, and have raised £31,000 already. They are currently raising further funds to pay for an architect to draw up the finished plans for the development that will allow them to put together a bid for the St Ann’s site.

If the project succeeds, it could change the way we think about housing in London. There’s already one other community land trust in Mile End, which has created 23 affordable homes with prices based on average local wages. Groups in Lewisham, Croydon and Southwark are also looking to create community-led developments. However, the scale of StART’s project is unprecedented, with the group hoping to build 500 truly affordable houses.

So, could projects like StART enable local communities in London to put a real dent in the dominance of private property developers? And do these projects signal a new direction for housing activism, focusing less on necessary resistance and instead offering an alternative vision for housing in London?

It is too early to predict whether StART will in fact manage to outbid private property developers and if we will soon see more community-led developments rolled out across London. Developing any site is a very long process, taking many years. However, the appeal of StART’s message to a diverse range of the community bodes well for the future of community-led developments. “Presenting a proactive and alternative vision of housing is a really powerful idea for people”, explains Seb. “It gets new people involved who might not otherwise be involved in housing activism.”

But he is quick to point out that this does not render resistance based housing activism defunct. StART supports the aims of organisations defending social housing on Haringey estates. “In other cases, resistance of a much more direct kind and a refusal to accept terms imposed by an outside body is much more appropriate”, Seb notes.

Whether or not they are set to multiply in the coming years, community-led developments like StART offer a compelling solution to help ease the housing crisis. At a time when private property developers continue to monopolise housebuilding in London and dictate supply according to their own greed-fuelled logic, these projects are more vital than ever.

Donate to StART’s crowdfunder to support their work.

Linkedin
RELATED ARTICLES
OTHER ARTICLES
Thousands attended the annual event this year to wheelie through the city and call for ‘knives down, bikes up’.
Birdy Chu reflects on documenting the historic moment in which the territory was formally passed back from the UK to China.
A 37-year-old woman shares how her abortion led her to become a clinic worker, and the abuse she’s received in that role.
Following the announcement of an 80% hike in the energy price cap from 1st October, crowds gathered outside the offices of energy regulator Ofgem to protest and declare their intention to undertake a payment strike.
Financial turmoil is pushing people who work in the sex industry into more dangerous and desperate situations as a means of survival.
For over a decade, gamblers have won big by employing people to place live bets from the court. But does this dubious method still work?