News & Politics / Activism / How to make a difference in politics, with Magid Magid 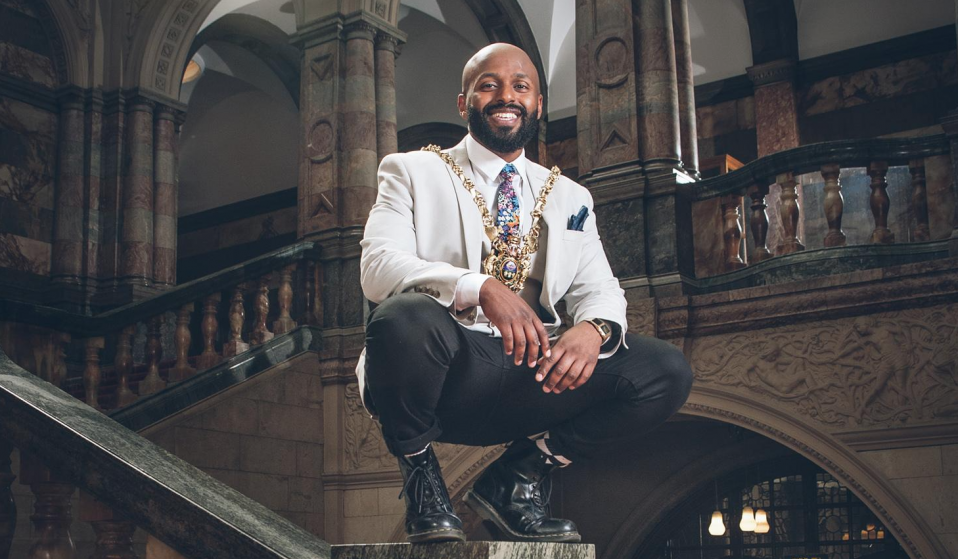 For the latest instalment of our series on how to save the world, Lord Mayor of Sheffield Magid Magid how we can really fix politics – from carving out new communities, to sticking to your convictions.

For the latest instalment of our series on how to save the world, Lord Mayor of Sheffield Magid Magid how we can really fix politics – from carving out new communities, to sticking to your convictions.

Sheffield’s Lord Mayor Magid Magid can take claim to many “firsts”. In Sheffield, he is the first Somalian mayor, the first Green Party mayor, the first Muslim mayor, and at 29-years-old he is also the youngest mayor ever to be appointed. In his 12 months in office, he toured offices the day after England lost the World Cup with consolatory sweets, he appointed hip-hop artist Otis Mensah as the city’s poet laureate, and he pronounced Donald Trump a “wasteman” and banned him from visiting the steel city.

His position has not been without controversy, especially within the stuffy old halls of the mayoral office. “The people who have been putting barriers up have been my own council,” he tells Huck from his chambers in Sheffield. His signature back-to-front baseball cap is firmly on his head, and regal mayoral paraphernalia sits alongside various pairs of Dr Martens.

His controversial mayoral portrait, shot by Chris Saunders, shows Magid squatting on a pillar in the Town Hall. It is a photograph that marks him out as different from his predecessors – not least because he is grinning and not wearing any of the traditional robes. “There’s a room that has portraits of all the Lord Mayors since the 19th century and they all just look exactly the same. I just thought it was such a shame, it would have been great if each Lord Mayor was a bit creative and used their portrait as a way to tell a story.”

If “the squat” is anything to go by, it seems that the residents of Sheffield want to be part of Magid’s story: he often gets sent photos of fans mimicking the squatting pose on social media. “Sometimes I go into schools and the kids welcome me by squatting on their chairs,” Magid says, with a laugh. “It is just most the bizarre thing, but it is so cute.”

This is his crowning success; engaging young people in politics. You’d be hard pressed to find a young person in Sheffield that could name a previous Lord Mayor, but Magid has racked up over 20,000 followers on Instagram and uses the platform to promote issues like climate change and NHS funding cuts.

Although he announced his plans to step down last week, Magid will be leaving a lasting legacy, and has profoundly changed the role of Lord Mayor in Sheffield. He’s therefore well placed to offer the world some tips on how to make a difference in politics.

I Magid Magid, Lord Mayor & first citizen of this city hereby declare that not only is Donald J Trump (@realDonaldTrump) a WASTEMAN, but he is also henceforth banned from the great city of Sheffield!

Find your tribe, and carve out a community

“Find a group of people that share your views and are trying to do the thing that you want to do. That could be an online community, or that could be a community in your area. Just go out there and ask how you can help. If there is something you really want to change, and you haven’t got the resources, collaborate with other people – you’ll have a much bigger impact. There is power in numbers.”

Don’t try and please everyone

“There’s quite a proportion of people that absolutely can’t stand me. People either really love me or they hate me, but they’ve all got a passionate opinion about me. I am sparking debate, people are having conversations. I can’t please everyone, and I am not trying to – if you try to please everyone, you please nobody at all. You can’t represent everybody, that’s just a fact. Someone asked me on Twitter which football team I supported, and I said Sheffield United, since then I have been getting abuse from Sheffield Wednesday fans. But I am not going to lie to you. For so long, politicians and Lord Mayors have been playing it safe. I don’t have the privilege of not being political – I am a black Muslim immigrant. I don’t understand why people would want any councillor, Mayor or MP, to shut up and not say anything. Even the people that hate me kind of respect me, because at least I sign up for what I believe in.”

“Every month I do a social media campaign where I squat somewhere inside the Town Hall, and I wear a different hat, a different pair of Dr Martens and a different t-shirt with a message. I always drop it the first Wednesday of the month at 2 o’clock when we have a full council meeting. I do it to get people’s attention: there is a lot of information out there, I want to try and capture people’s imaginations first and then feed them with some positive messaging. People don’t remember what you say, but they remember how they feel, so I always try to engage people emotionally.”

Regardless of how you cast your ballot in 2016, nobody voted for this shitshow. The gulf between what was promised and what's being delivered widens by the day. With the continued ineptitude of parliament, we, the people, must clear this mess.

“There was a BBC poll and more people in Sheffield could name the Lord Mayor than their local MP or councillors. I think our leadership in Sheffield doesn’t like to be at the forefront of things, they like having comfortable lives and staying in the background. But because I am so in your face, I basically hear everyone’s issues. If you are struggling, you will attach yourself to whoever you think has a bit of power, so I could be running two or three constituencies with the amount of casework that people are bringing to me. Political leaders need to engage a lot more – and not by just doing online consultations, which is just a box ticking exercise. They need to listen and mean it. You’re there to represent the people, you’re not there to put the interests of your party before the people you are there to represent.

“We live in polarising times and I don’t think we should shy away from difficult conversations, but sharing our stories is really important. Regardless of what other people’s political views are, we all have things in common – we all have families, we all love food, we all have relationships of some sort. Telling stories is a really powerful way of breaking down barriers and bringing people together. Sport, music, food, arts and culture are great ways of bringing people together. I have a friend who arranged a community dinner for Thanks Giving and invited everyone in his area.”

Don’t be a prick

“Everyone is going through stuff. Be kind to people, don’t be so quick to judge.”

Linkedin
RELATED ARTICLES
OTHER ARTICLES
Rogue landlords are exploiting young and inexperienced renters and leaving them in mental and financial turmoil, reports Niall Hignett.
A group of young Palestinians have found temporary freedom in the act of parkour, reimagining wreckage and ruins as a series of high-octane playgrounds.
Birdy Chu reflects on documenting the historic moment in which the territory was formally passed back from the UK to China.
Ahead of the release of their first collaborative album, the producer and rapper talk psychedelics and the state of UK hip hop.
The two-day long event returned to London this year, showcasing a spectacular parade, steel bands and Caribbean food.
The idea that a younger generation is abandoning work has become a popular narrative online, but it doesn’t necessarily reflect reality.