News & Politics / Activism / How we won a rent freeze in Scotland 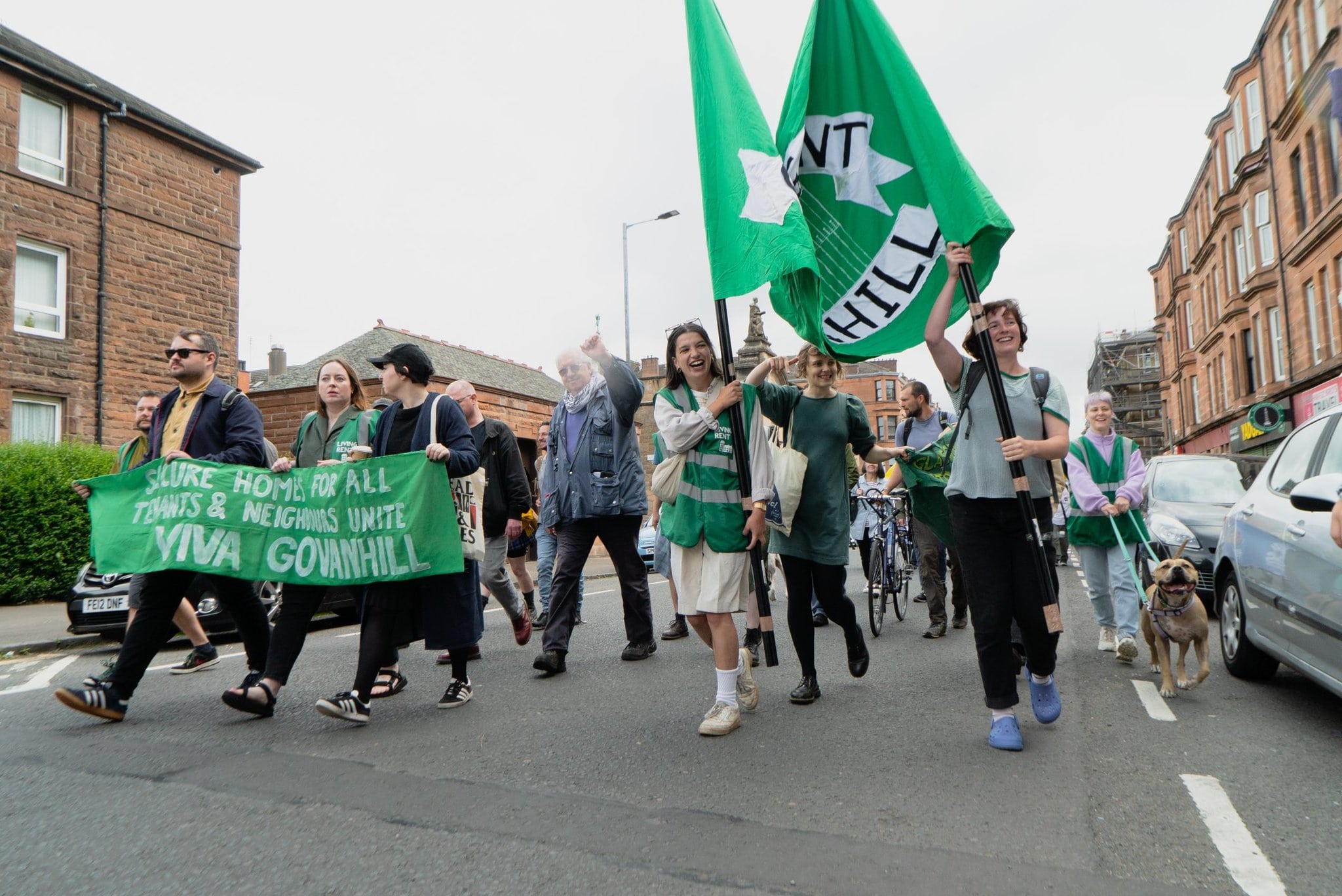 As the Scottish government announce a rent freeze, an activist with Living Rent who fought and won shares how they did it, and what must come next.

As the Scottish government announces a rent freeze, an activist with Living Rent who fought and won shares how they did it, and what must come next.

This week, the Scottish Government announced, with immediate effect, a rent freeze across both private and social housing, as well as a ban on evictions. The details are still a little vague, and campaigners still have big, unanswered questions, but there is no doubt that it is a dramatic and important step forward for tenants’ rights across the country.

It goes without saying, of course, that this was the result not of magnanimous politicians doing the right thing, but of years of tenants organising and fighting back in every corner of the country. Since 2014, tenants’ union Living Rent has been demanding the reintroduction of rent controls, scrapped by Thatcher in the 1980s, and building a union capable of forcing the government to do it.

While there is overwhelming and widespread support across Scottish politics for rent controls, the government has so far failed to deliver. In 2016, delegates to the governing SNP’s annual conference unanimously passed a resolution in favour of a national system of rent controls. Later that year, the SNP introduced so-called ‘rent pressure zones’, which they claimed would allow local authorities to ensure affordable rents.

At the time, Living Rent members warned that these ‘rent pressure zones’ (RPZs) were designed to fail and, sure enough, six years later the policy has proven impossible to implement anywhere. This failure to deliver meaningful rent controls at the time, coupled with rents continuing to increase far faster than incomes, has been a disaster for tenants. But if the failure of RPZs pushed tenants to the edge, the pandemic pushed them over it.

Well done to @Living_Rent for showing that we can force those in power to act on the housing crisis.

Our campaign is calling for the rent freeze to be extended across the UK.#EnoughIsEnough

In these six years, Living Rent has also grown dramatically. Counting dozens of local branches, organised deep in neighbourhoods and communities, and paid-up members in every city and town in Scotland, the union has focused not on parliamentary lobbying, but on building working-class, tenant power able to force politicians to change the housing system.

Week in, week out, the union’s local ‘member defence’ teams are stopping evictions, forcing repairs, winning massive pay-outs from landlords, and growing the union. Members are pushing for retrofits, for better public services and building links in their communities. Alongside its focus on grassroots militancy, the union has also secured dramatic legislative victories: including the abolition of no-fault evictions and insecure short-assured tenancies, a sweeping set of new limits on holiday lets, and a hard-won ban on evictions during Covid.

Crucially though, these legislative victories were not achieved by conciliation and compromise, but by uncompromising demands from the union, confident that its legitimacy comes from the mass of tenants it represents, not the glossy reports it publishes.

In 2021, the Scottish Parliamentary elections led to a ‘co-operation deal’ between the SNP and the Scottish Greens. Their co-operation agreement included a crystal clear commitment to rent controls. Again here, Living Rent members have raised vital unanswered questions about the details, and especially about the timeline. While the agreement recognised the need for rent controls in a failing housing market, it didn’t propose actually introducing rent controls until the very end of the parliamentary term – as late as 2025.  Despite these issues, the agreement did and does mean that Scotland is closer to the reintroduction of rent controls than at any point since they were scrapped, and that matters.

This aside, tenants continue to reel from the financial shocks of lockdown and the pandemic, the spiralling costs of living and inflation have taken matters from bad to worse. Many of the issues driving the cost of living crisis are, to at least some extent, largely outside the powers of the devolved Scottish Government. As a result, the SNP and Green politicians have been banging the drums hard over the energy price cap rises in particular — comfortable knowing that they can posture however they like, because the actual responsibility for action sits with the Tories in London.

But, as Living Rent members have pointed out consistently, for most tenants, the annual cost of rent dwarfs even the most disastrous predictions of the cost of energy. Across Scotland, landlords have also serving tenants with eye-watering rent increases, many as high as forty or fifty percent. Housing, unlike the energy price cap, is completely devolved. That means the Scottish Government has no excuse for inaction on rents, and Living Rent made sure that they understood that.

This extreme and utterly untenable situation was the context in which the Scottish Government finally stepped up and announced a freeze on rents this week — despite rejecting an opposition amendment to do exactly that just months ago.

The government has still not announced the details of how this rent freeze will work — and there are some crucial concerns about that. The announcement was that it would last until March, but most rents in the social sector go up annually in April — so how does this protect them? What happens where rents are already unaffordable? What happens to people who’ve already been served rent increase notices?

These questions desperately need answers, and Living Rent members will be working hard to ensure that the freeze has real impact. Even with those caveats, though, it is an extremely welcome move — and a serious blow to the unfettered profits of private landlords in particular.

The current crisis means that an emergency rent freeze was an absolutely necessary temporary measure, but it isn’t really the goal.

Going forward, the goal for tenants has to be something much, much more ambitious. Living Rent has called for a comprehensive, national system of rent controls that doesn’t just freeze rents, but brings them down. The ‘points-based’ system the union proposes would also tie the amount a landlord could charge to the quality of the property, forcing them to make the repairs and improvements that Scotland’s housing so desperately needs.

The point of this system is not to just curb the worst excesses of the sector, but to fundamentally and permanently reshape Scotland’s housing.

The response from landlords to the rent freeze has already been hysterical, wailing that they will be forced to sell up. Our response? Good. There should be no place for the rampant exploitation that we see in rented housing, and it should be the clearly stated purpose of a system of rent controls to shrink the sector.

This rent freeze is an important step, but put bluntly: we must make landlordism unviable as a business.

Gordon Maloney is a campaigner with Living Rent.

Linkedin
RELATED ARTICLES
OTHER ARTICLES
Birdy Chu reflects on documenting the historic moment in which the territory was formally passed back from the UK to China.
Rogue landlords are exploiting young and inexperienced renters and leaving them in mental and financial turmoil, reports Niall Hignett.
By turning a real-life crisis into daytime television fodder, TV bosses have once again shown themselves to be completely out of touch with audiences.
The idea that a younger generation is abandoning work has become a popular narrative online, but it doesn’t necessarily reflect reality.
Ahead of the release of their first collaborative album, the producer and rapper talk psychedelics and the state of UK hip hop.
For over a decade, gamblers have won big by employing people to place live bets from the court. But does this dubious method still work?