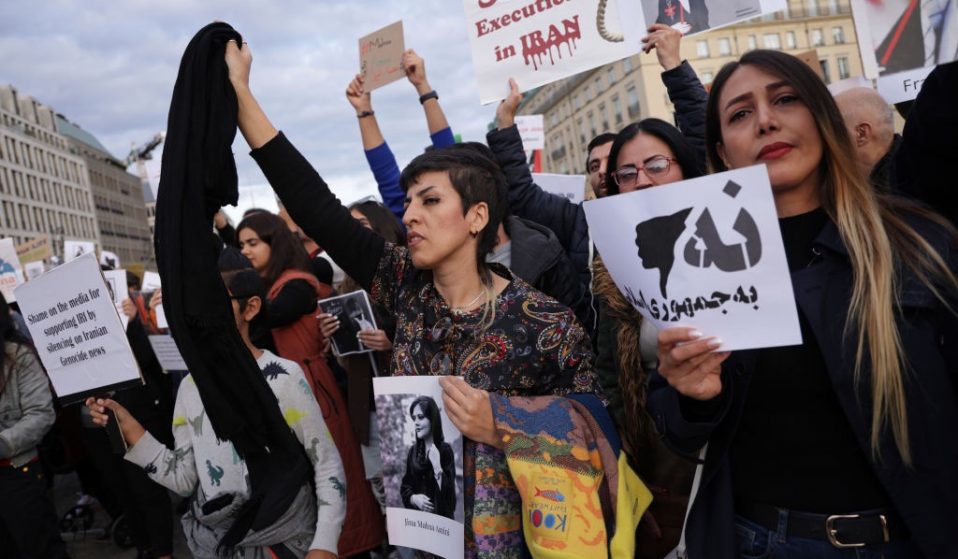 As protests in Iran intensify, a young woman describes being brutalised by police at age 16 and why she’s now taking to the streets.

As protests in Iran intensify, a young woman describes being brutalised by police at age 16 and why she’s now taking to the streets.

Mahsa Amini, a 22-year-old woman from the Kurdistan region of Iran, was visiting Tehran on 13 September when the morality police arrested her for dressing in an “improper” manner – allegedly wearing her headscarf too loosely. Since the 1979 revolution, it has been compulsory for women in Iran to wear a hijab, a rule which has been enforced strictly and often brutally by the notorious morality police.

Three days later she was dead. Eyewitnesses say she was beaten by police while in custody. The Iranian authorities claim she died of a heart attack, but they are being accused of a cover-up.

Since her death, Mahsa has become a symbol of resistance against Iran’s authoritarian regime, igniting protests across the country, with women bravely taking to the streets to burn their hijab, demanding justice for Mahsa, while also calling for the overthrow of the government.

Taraneh, a 24-year-old Iranian woman from the northwest of Iran who is now based in Milan, tells journalist Jessie Williams about being arrested for her hijab when she was 16, and why she is protesting.

My reaction when I heard about what happened to Mahsa Amini was, ‘that girl could have been me’. When I was 16 years old, I was arrested because of my hijab; you have to wear a long blouse and mine was a little bit short. I was with my boyfriend. I was so scared. I was yelling. Two of [the morality police] grabbed my arms and pulled me inside their van. I resisted because I didn’t want to go inside. They pulled me in. The van sped off while the door was open – like half of my body was outside. I could have fallen out of the back, I could have hit my head. My blouse was ripped and my arm was bleeding. I had bruises on my arms for two months.

In the van, they told me I had to sign this letter saying that I was healthy and that the police didn’t do anything to me. I was like, ‘Look at me, you’re telling me you didn’t do anything to me?’ They said if you don’t sign it, you’re going to stay in the van, and you cannot use your phone. They said if you sign it, then we’ll bring you inside the police station and you can call your mother to bring you new clothes and you can go back home. I was 16, I was so scared. So I signed it.

They took me inside the station and they took photos of me like I was a criminal. Then they realised that I was 16 years old so they couldn’t actually arrest me. They didn’t even say sorry. My mum came and brought me new clothes to cover me in the way they wanted, and then they let me out. I was relieved when I got out.

No one knows where you are [if you are imprisoned]; your family is searching for you for months and months in the hospitals and in different jails, and they can’t find you. So many women inside the jails get raped. [The authorities] can do everything they want and you can’t do anything because they rule everything. No one hears your voice.

I cannot tell you how much power they have to do everything to you because they are ruling the country. When I was arrested, I thought anything could happen; they could rape me, they could harass me, they could touch me. All these things flashed in my mind.

Women are at the centre of the anti-regime protests that have exploded across Iran. pic.twitter.com/NguRTiAv2P

I moved to Milan two years ago. Many things made me want to move from my home country. I wasn’t free [in Iran] to do what I want. It’s like [being in] a cage.

Imagine being born in a country where you have to start wearing a hijab at seven years old when you start school. We have to cover our whole body. It’s like the government sees you as something sexual when you are only seven years old.

Because of the internet blackout in Iran, I haven’t been able to speak to my family or friends. The only way I knew what had happened was when I saw the videos of the protests on Facebook. They blocked the internet and they are killing people so nobody knows how many people have died. I’ve tried to call my mum so many times: I didn’t talk with her for 10 days. Four days ago my mum called me at midnight and we spoke for 10 seconds. She just told me that she was OK and we started crying and then there was no connection, and that was it.

It’s always like this. This is not the first time: every time people protest they block the internet so people can’t get together, and so the rest of the world don’t know how many people they arrest and kill. And so nobody hears us. I’m sure that at least 100 people have been killed [in the recent protests].

After I saw all those videos I didn’t know what to do. So I went to a protest in Milan with one of my Iranian friends. She is like me, she has never been to a protest. We were all crying. And then they started to cut their hair. I was the second person in the line to cut my hair – my hair is very long and I cut off the front part. Italians joined us and cut their hair too.

Iranian women have had enough of being told what to wear. Why can we not be free like other women in other countries? We are all made from bones and blood and meat, what is the difference between me and another woman in another country where she can be whatever she wants and wear whatever she wants? It is a basic right. It’s 2022. We have had enough. So many people have died [because of this] – Mahsa is not the first. We are tired of this. We are fighting, but we need to be heard.

I really hope this leads to change in Iran. We have protested so much over the last 44 years, but nothing has changed. I want to see my countrywomen being free. The only problem in our country is the government, and we need to change it. The only way is by using our voice.

Linkedin
RELATED ARTICLES
OTHER ARTICLES
A new exhibition brings together 150 works by twelve photographers, offering mesmerising and intimate depictions of life.
A centuries-old tradition is offering families a way to honour the deceased, reports Arbab Ali.
With the singer’s tour in full swing, we sat down the musical production company who made the electrifying show possible.
Planet Ardbeg is a 40-page sci-fi anthology created by three cutting-edge artists.
The Egyptian government are continuing the repressive mistreatment of environmental campaigners.
A new photo series documents tribes preserving the environment through simple, sustainable practices in central Asia.