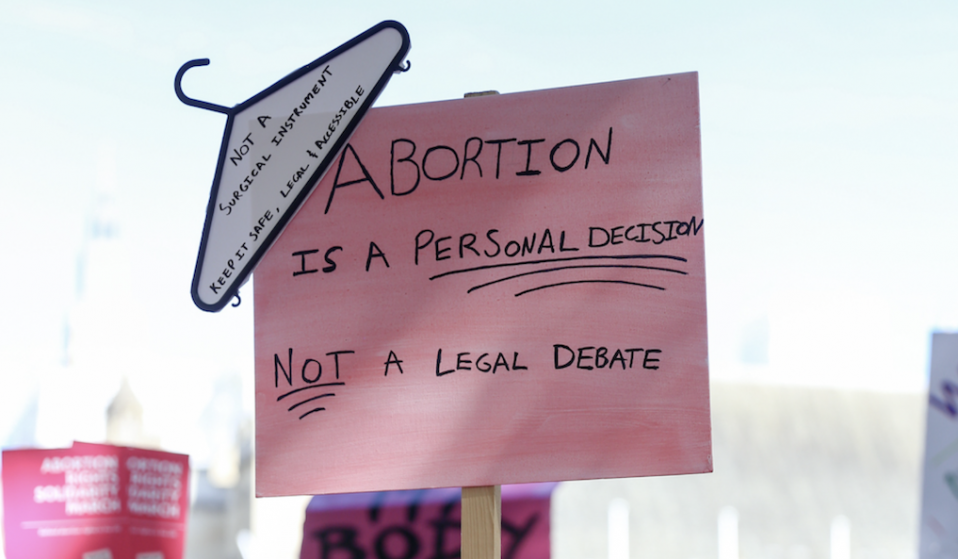 Campaigners reflect on what the supreme court’s decision to allow buffer zones in NI means for the future of reproductive rights in the UK.

Last month, the supreme court ruled to allow buffer zones around clinics to protect users and staff from anti-abortion protestors in NI. Campaigners reflect on what the decisions means for the future of reproductive rights.

On 19 October 2022, miniature coffins appeared outside Causeway Hospital in Coleraine, Northern Ireland. A general hospital housing services including maternity and children’s units, these baby coffins were placed in protest at the abortion services which had been running there since 2021. Part of an effort by anti-abortion groups to commemorate the third anniversary of abortion being decriminalised in Northern Ireland, the coffins and crosses were connected to a ‘prayer vigil’ organised by Precious Life – the largest pro-choice group in Northern Ireland – outside hospitals in Coleraine, Derry, and Newry.

Pro-choice campaigners across Northern Ireland hope that intimidation of this kind may soon be a thing of the past. In March of last year, a private members bill was passed through Stormont that would bring in legislation to allow for buffer zones at abortion clinics. Brought forward by Green Party MLA Clare Bailey, the bill provides a 100m ‘Safe Access Zone’ outside the entrance and exit of any HSC building where abortion services, or information, advice or counselling regarding abortion, are being provided. A safe access zone, often referred to as a ‘buffer zone’, is an area around premises where abortion and related services are carried out. In this designated area, harassment such as graphic signs, repeatedly filming or following clinic users is not allowed. The bill will protect not only those accessing these services, but those accompanying them and those working on the premises.

Last month, there was another important step for abortion access in Northern Ireland. The Abortion Services (Safe Access Zones) Bill was held up by the UK Supreme Court in response to concern from the NI Attorney General that it disproportionately impacted on the rights of the anti-abortion protestors. The Supreme Court unanimously found that not only does the bill not hamper the right to protest, but stated that UK governments had the obligation to enable pregnant people to access abortion services without intimidation or harassment.

“I want to pay tribute to the campaigners and activists that have fought tirelessly to ensure that women can access legal healthcare without fear of harassment and intimidation,” said Clare Bailey of the Supreme Court win. “This is the best Christmas present ever.”

Nowhere will this victory be more acutely felt than outside Causeway Hospital, where the group North Coast for Choice has been challenging anti-abortion protestors increasing in number and hostility. “We were initially set up as a group to counter the increase of the anti-abortion presence in the area – such as their information stalls and protests”, says Amy Merron, one of the founders of North Coast for Choice. “We thought that something based in a more rural setting would be great to challenge stigma head on”. While the group was originally set up a few years ago, due to the pandemic and other commitments, they had their first official meeting in October of this year.

A few members of the group initially started counter-protesting outside Killowen Medical Centre in Coleraine, where abortion services had been housed last year. When services moved to Causeway Hospital, the anti-abortion protestors moved with them, and North Coast for Choice followed. As well as the graphic language and imagery on display, members of the pro-choice counter-protests have experienced homophobic or transphobic insults at the hands of pro-life groups.

“There are of course abortion seekers themselves who attend the hospital to access services. But there have [also] been instances where individuals who have experienced a miscarriage have been angered and upset by the imagery that they face,” says Merron. “The protesters will usually move to a place where their signs are visible to the traffic and have often tied signage up to railings and poles.”

The Supreme Court judgement reflects what pro-choice activists have been asserting for years. Namely, that harassment outside abortion clinics is a barrier to access, and impedes privacy and autonomy, not only for those who are accessing abortion services, but the healthcare workers providing them. The implementation of buffer zones outside abortion clinics has been a key part of many campaigns for abortion access, and some form of local or national legislation regarding buffer zones can be found in countries such as the USA, Australia, South Africa and Canada. In 2018 the UK Home Office held a consultation on the issue, but despite evidence that more than 44 clinics were facing hostile demonstrations on their doorsteps, the then-Home Secretary Savid Javid responded that national action would not be “proportionate”.

While Northern Ireland will be the first country in the UK to have legislation on buffer zones, there is currently work underway to bring in legislation in England, Wales and Scotland. There have been some local efforts to enforce buffer zones, with Ealing Council being the first in the UK to enforce a buffer zone in April 2018, thanks to campaigning by the grassroots organisation Sister Supporter, now a national movement. This abortion clinic buffer zone was enforced via a public spaces protection order (PSPO), with similar orders brought in to set up buffer zones in councils such as Richmond in 2019, and Manchester in 2020. National legislation for England and Wales is set to come into force through an amendment to the Public Order Bill, passed in the House of Commons in October of this year.

In Scotland, the campaign group Back Off Scotland has been campaigning to introduce buffer zones outside abortion clinics. “During the pandemic we started to realise there was still a presence outside our local sexual health clinic, during a time where there was so many restrictions”, says co-founder and director of Back Off Scotland Lucy Grieve. “We knew that 80% of abortions were happening at home so this meant that the 20% that there were going in were extra vulnerable, complex cases or people who needed extra safeguarding”. Initially focussed on students in the Edinburgh area, the group soon became a national campaign, receiving hundreds of stories from people facing harassment outside clinics. “Even if you’re not going in for an abortion, if its a miscarriage or baby loss this harassment almost undoes the compassionate service they received from the NHS”, says Grieve. “We heard from one woman who wasn’t going to go back to use the services at the rape crisis centre because she was so traumatised by the protestors.”

In Scotland, as in Northern Ireland, policing and justice is a devolved issue, bringing the issue of safe access zone legislation into the remit of the Scottish parliament. Earlier this year, Scottish Greens MSP Gillian Mackay, with support from Back Off Scotland, brought forward a private members bill in the Scottish parliament that essentially mirrors the bill brought through Stormont by Clare Bailey.

“A lot of our Scottish bill was based on the assumption that the NI bill would be held up by the courts,” says Lucy Grieve. “I watched the judgement live and had a tear in my eye”. With support in parliament for the bill, and the legal precedent set by the Northern Irish bill in the Supreme Court, it is hoped that the Scottish bill will pass by the end of the year.

What’s clear is that while anti-abortion groups remain a powerful and well-funded presence, their ability to obstruct people’s access to abortion has been considerably reduced. “We hope that this will provide a bit of privacy and dignity to service users and staff.” says Amy Merron. “It will mean that we can put our energy into other campaigns.” With a recent promise from the Secretary of State that the UK government will commission abortion services in Northern Ireland, pro-choice campaigners are heading into this year with cautious optimism.

Linkedin
OTHER ARTICLES
After building his reputation covering the US civil rights movement in the 1960s, the photographer went on to produce some of the most enduring images of the past century.
The action took place in response to the 200 asylum-seeking children who were placed in hotels run by the Home Office who have gone missing.
A recent High Court ruling against the right to wild camp in Dartmoor National Park sparked the largest land protest in history – and campaigners say their fight is not over yet.
Theo McInnes’s photos of the annual event provide an intriguing snapshot of contemporary Britain.
A new law change is enabling Britain’s donor-conceived children to know the truth about their origins – but campaigners say the fertility industry must do more to protect people.
Photographer Becky Tyrell went down to the fading banger and stock raceway to meet a community desperate to keep it alive.