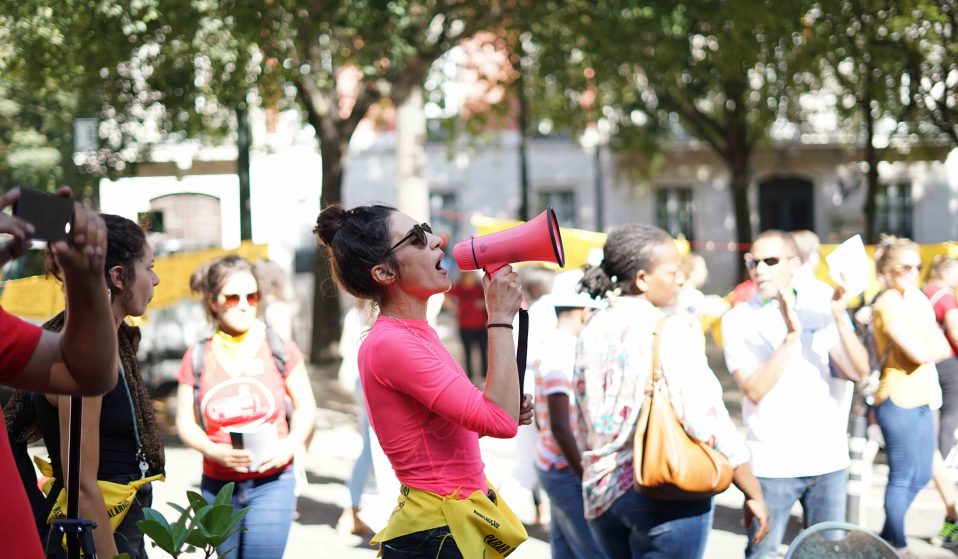 On Sunday, activists took to the streets of Lisbon to demonstrate against unaffordable rent hikes and widescale evictions.

On Sunday, activists took to the streets of Lisbon to demonstrate against unaffordable rent hikes and widescale evictions.

Hundreds of protestors gathered in Lisbon yesterday to demonstrate against the city’s controversial housing situation, which has seen widescale evictions and rent hikes wildly out of step with average salaries. In the last few years, thousands of people have been evicted from their homes.

September’s month-long Festival Habitacção (Housing Festival) culminated in an occupation of one of Europe’s most expensive shopping streets, Avenida da Liberdade. As the sun beat down, organisations – including the not-for-profit Habita and Stop Despejos (Stop Evictions) – united to drum up awareness, share impassioned messages, and develop strategies to help improve housing rights in the city.

“This street is considered the richest part of the town and we work with people who cannot normally come here because of their low salaries,” Habita’s Antônio Gori told Huck at the protest. “We have created an assembly to give a voice to people who don’t normally have a voice, in a place that is symbolically not open to them.”

“We want to promote a strong network between the different groups fighting for the rights to live in the city,” said festival organisers. Festival Habitacção is committed to an intersectional approach, joining forces with other grassroots movements like the anti-racism, feminism and climate change movements. “Historically, migrants, ethnic minorities and black and brown people are suffering more difficulties with having access to housing,” they said. “The worsening of the housing crisis is increasing the vulnerability of minorities and all the people that face different forms of discrimination.” 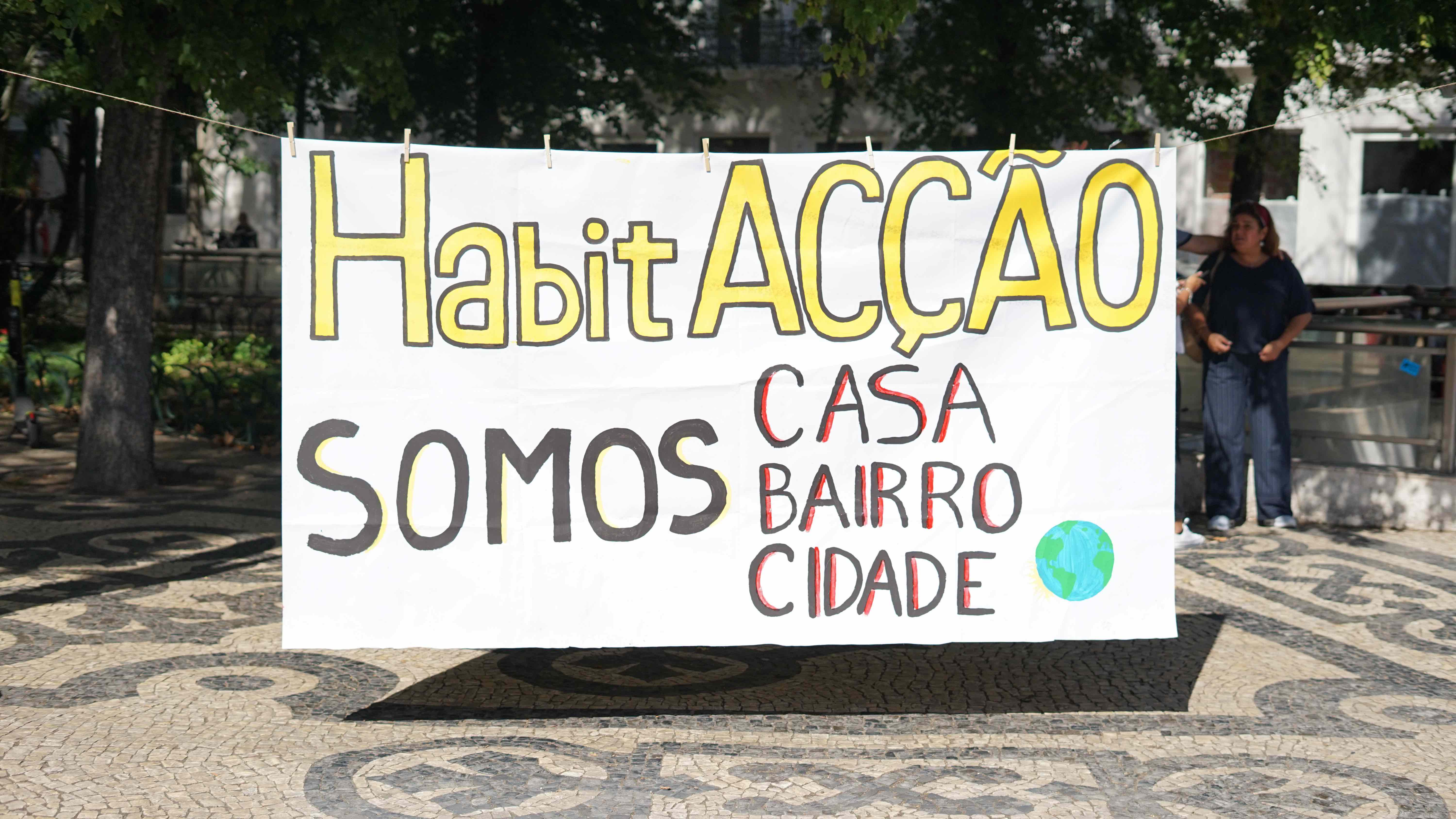 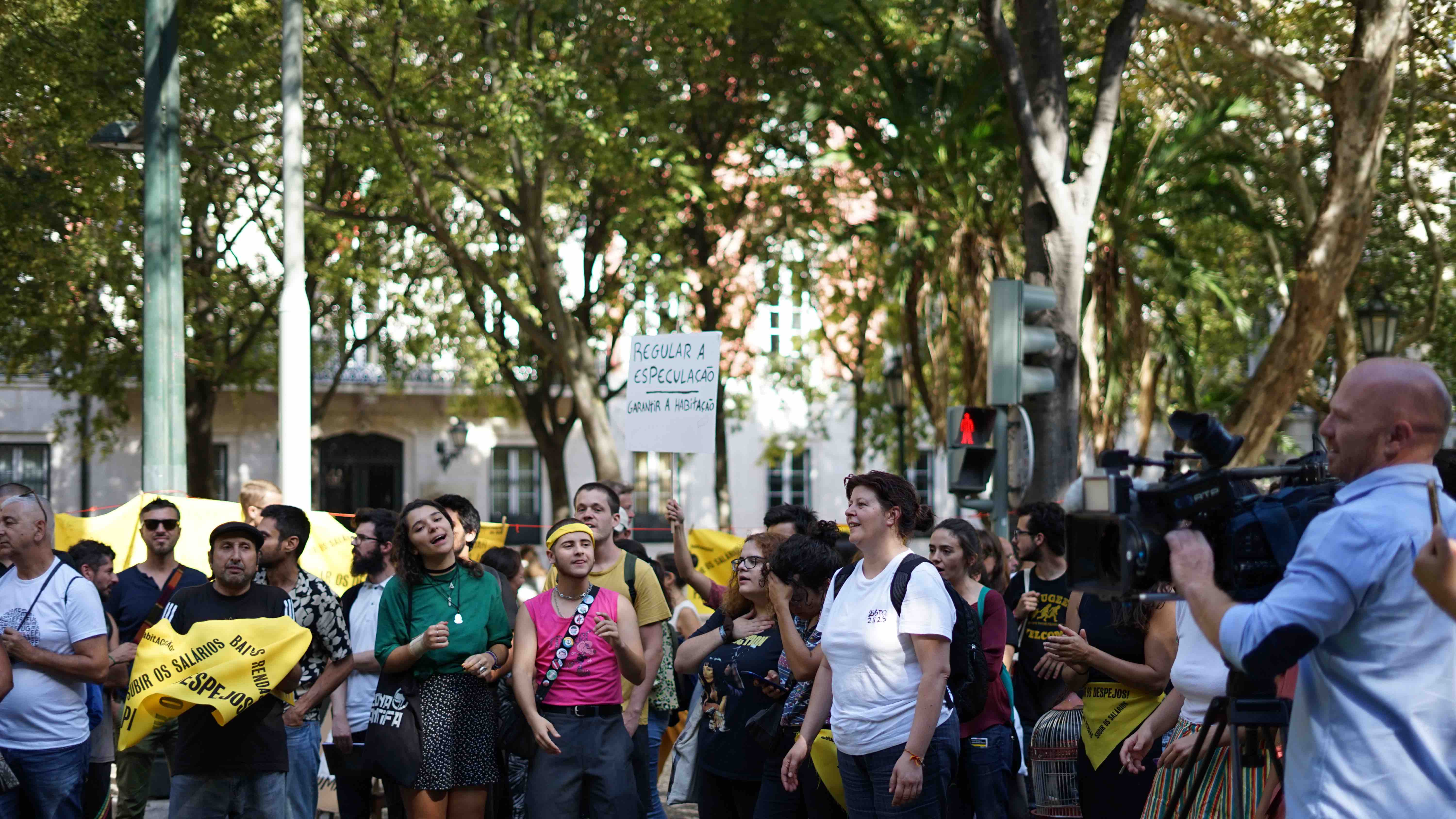 Among the housing movement’s list of demands are more public money for the development of public housing, the control of speculation on housing, and an end to incentives to speculations, including the golden visa scheme, which allows wealthy foreign investors to gain permanent residence permits in exchange for investment. Portugal is currently the number one European hotspot for investment, and hundreds of thousands of Portuguese residents are being priced out of both the housing and the rental market of central Lisbon and Porto.

After the country’s post-financial crisis bailout in 2011, the Portuguese government was told to turn to capitalise on its real-estate market. Lisbon averages 4.5 million tourists per year, which is the equivalent of nine tourists for every resident. Porto hosts 1.6 million tourists annually, which is eight visitors per resident. Landlords are now able to reap much larger profits from short-term rentals than from long-term contracts, which means that more apartments are being rented to tourists, and that long-term rents are rising.

“The GDP is growing, but the wealth is not being distributed fairly,” offers Gori. The city has one of the highest concentrations of Airbnb properties in Europe (ahead of Florence and Madrid). “Nowadays these are not even in the hands of the homeowners, they are in the hands of big groups and rental companies.”

The movement wants to see efficient rent controls put in place, alongside more stability with rental contracts – currently, contracts can be drawn up for just a year. They also want to regulate and decrease the number of tourist apartments. At the demonstration, one speaker addressed visitors in the surrounding area with shouts of “Hello everybody! I hope you are very happy with your experience! We are not happy that we don’t have houses in our own city”. This was followed by the rumble of beating drums and cries of “We want houses! We want houses!” 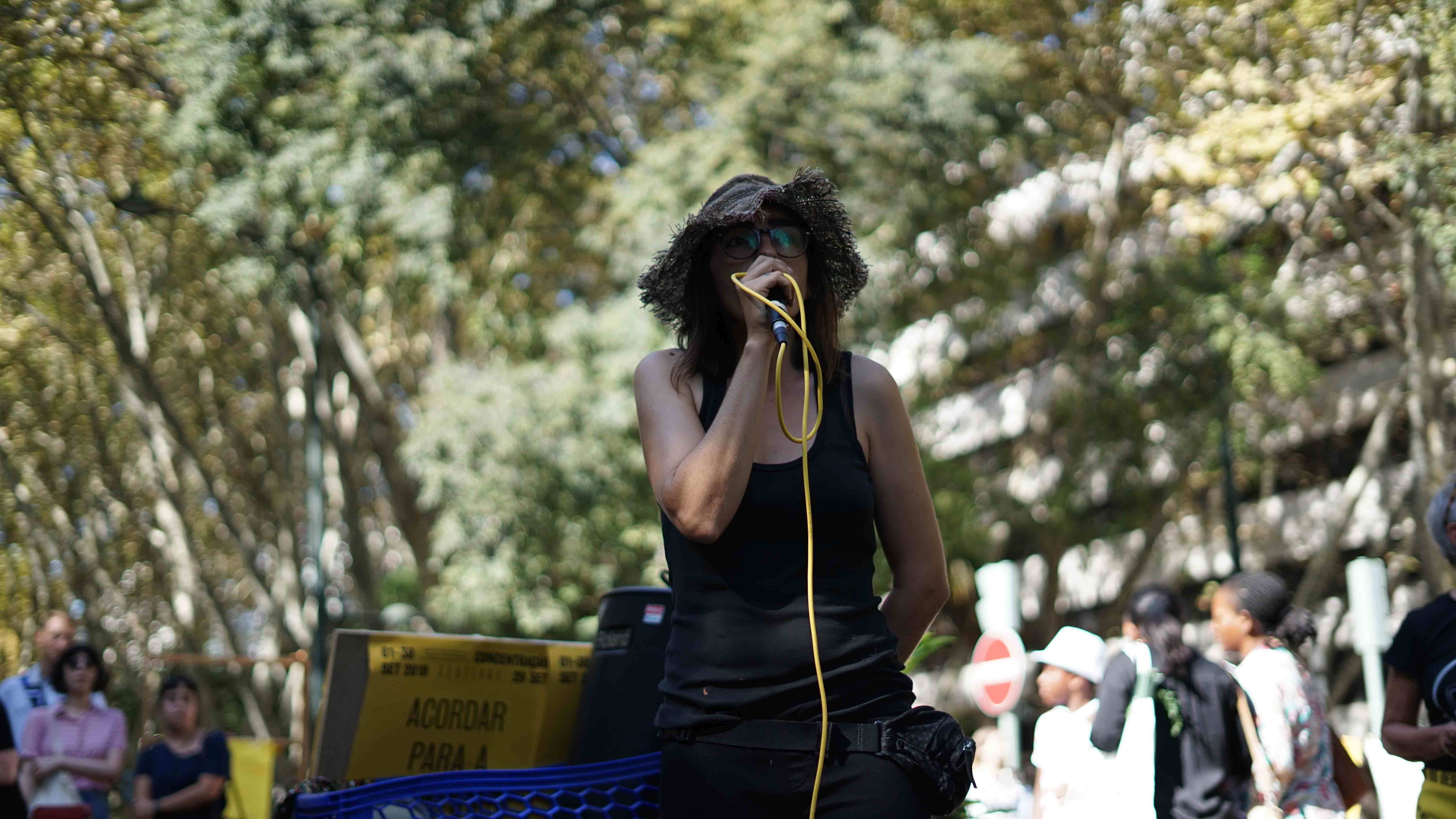 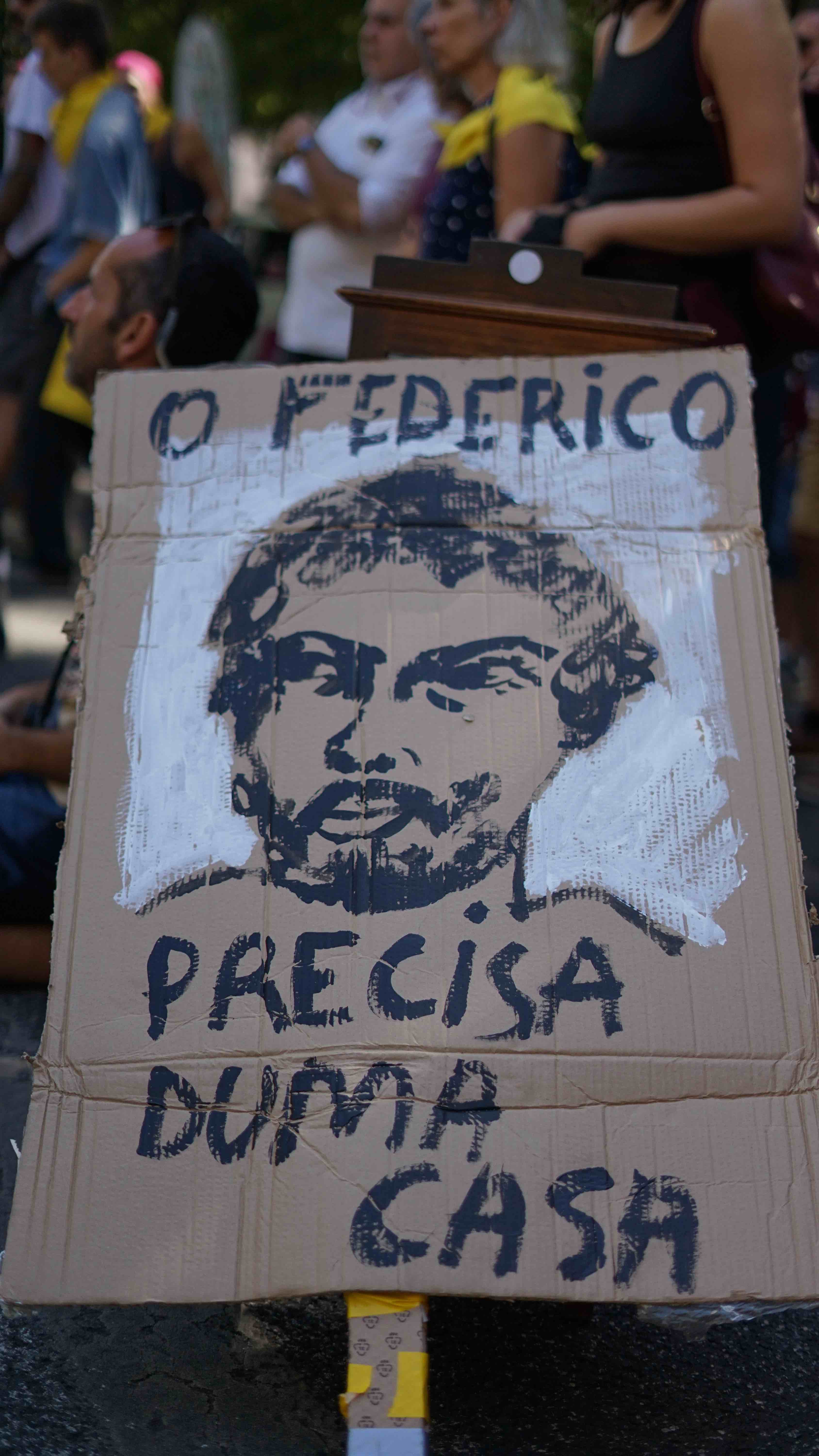 Activists are also demanding an increase in basic income. One of the central messages at Sunday’s event was the imbalance between wages and rent in the city. As of 2019, the official minimum wage in Portugal is 600 euros, with wage progression very slow in comparison to skyrocketing rents. Often, rents end up being greater than many Portugal-based salaries. There is no rent control in Portugal, and as a result, many residents have found themselves faced with unaffordable rent hikes.

One protestor, Virginia, 36, told Huck that she had seen dramatic changes in the city centre over the past 10 years. “Tourism, expensive Airbnbs – these have all impacted greatly on local residents and many have been forced to leave. When these people are evicted, most of the time they have no alternative. The bureaucratic machine here is so complicated that many vulnerable people are left living in very vulnerable conditions. I would love to see all the empty buildings given to the people who are living here, with affordable rent based on salary.”

53-year-old Luis has lived in the Arroios neighbourhood of Lisbon for 52 years. When his mother passed away last year, he received a letter of eviction from his landlord, and has been trying to find a lawyer ever since. He said that landlords are “annoying and provoking tenants to react. I’m educated, but can you imagine people who are 85 years old, vulnerable people who may not have the literacy level I have. They are simply unable to defend themselves.”

A new Basic Housing Law was passed in July. “It’s not supposed to be effective,” offers Gori. “It’s something we’ve been waiting for since 1976 – the state now has the duty to provide housing. But if the government are not going to make any effective new laws, for example like ensuring alternative housing for evictions, then nothing will get better. They need to put more money in the housing budget.”

After the assembly, Sunday’s action ended with a “house move”, where protestors transported furniture to nearby Martim Moniz square. Music later saw the protest out through the evening. Throughout September, Festival Habitacção had taken to the streets, occupied public space, and staged benefit shows to raise money for legal fees and other necessities. But the fight has only just begun. “After the elections next month, we are going to organise a popular assembly to continue the work that we started in the festival,” concluded the organisers. “We are being expelled silently from our cities. Our fight is not only for our houses, but also for our lives.” 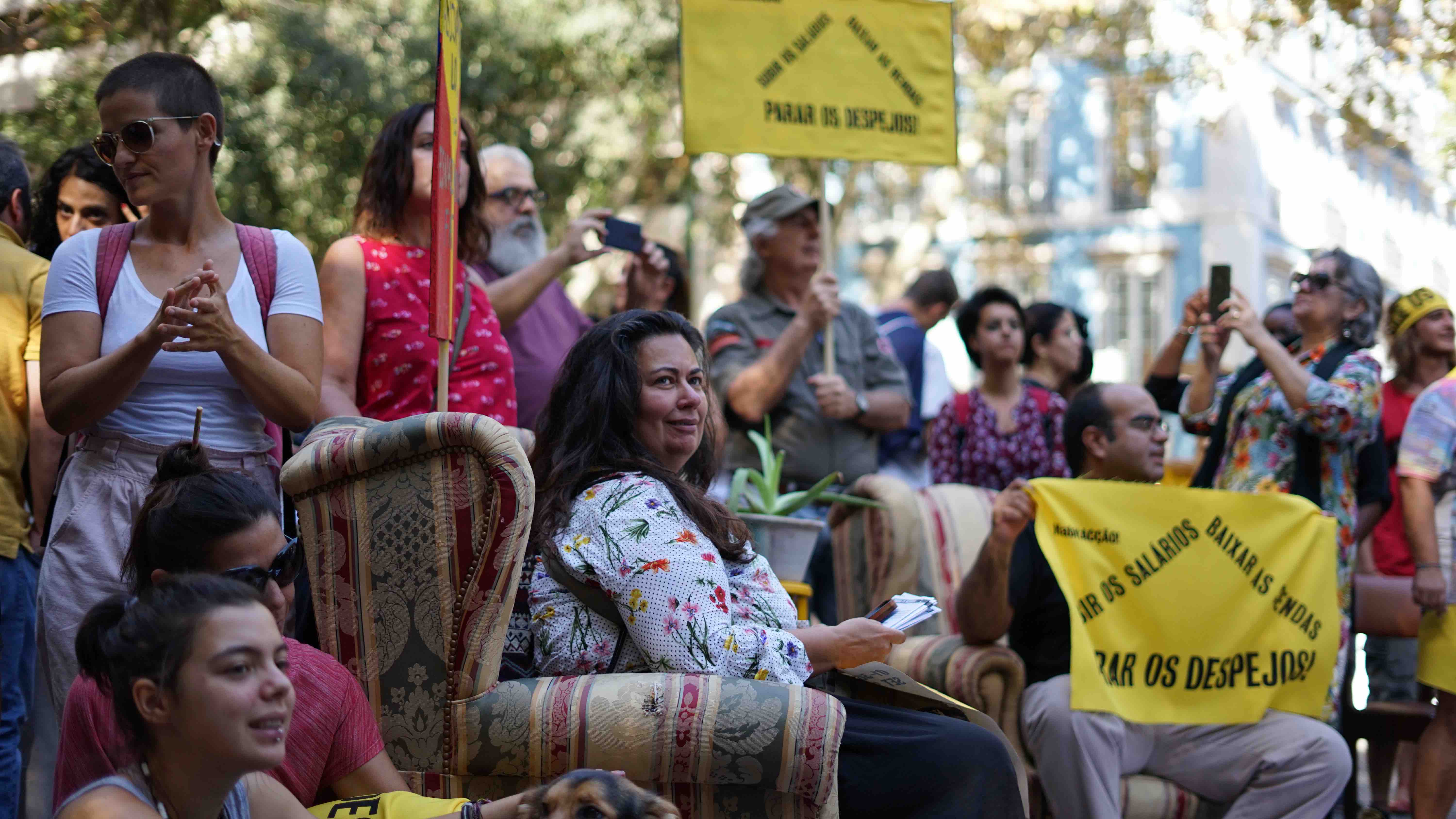 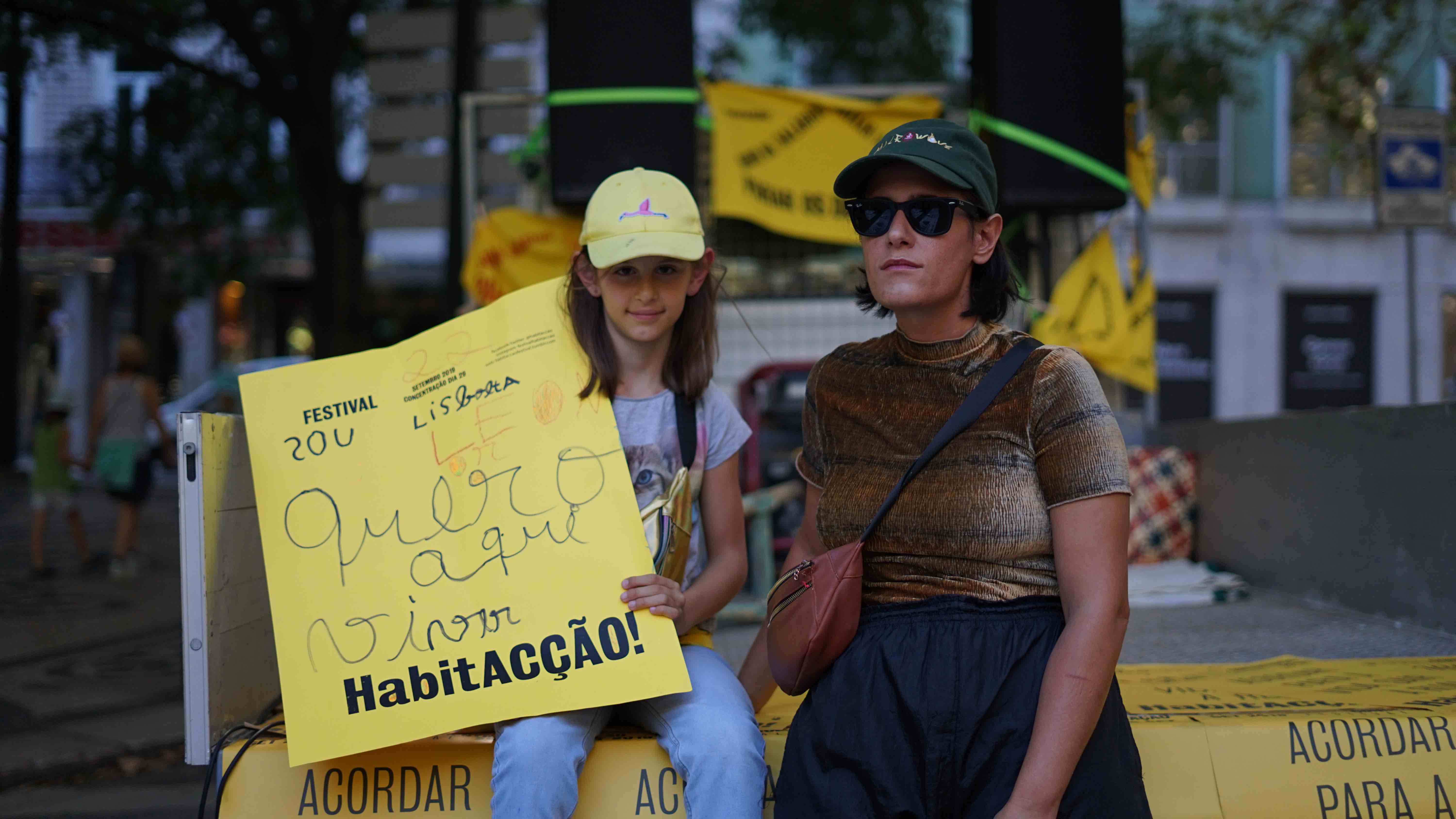 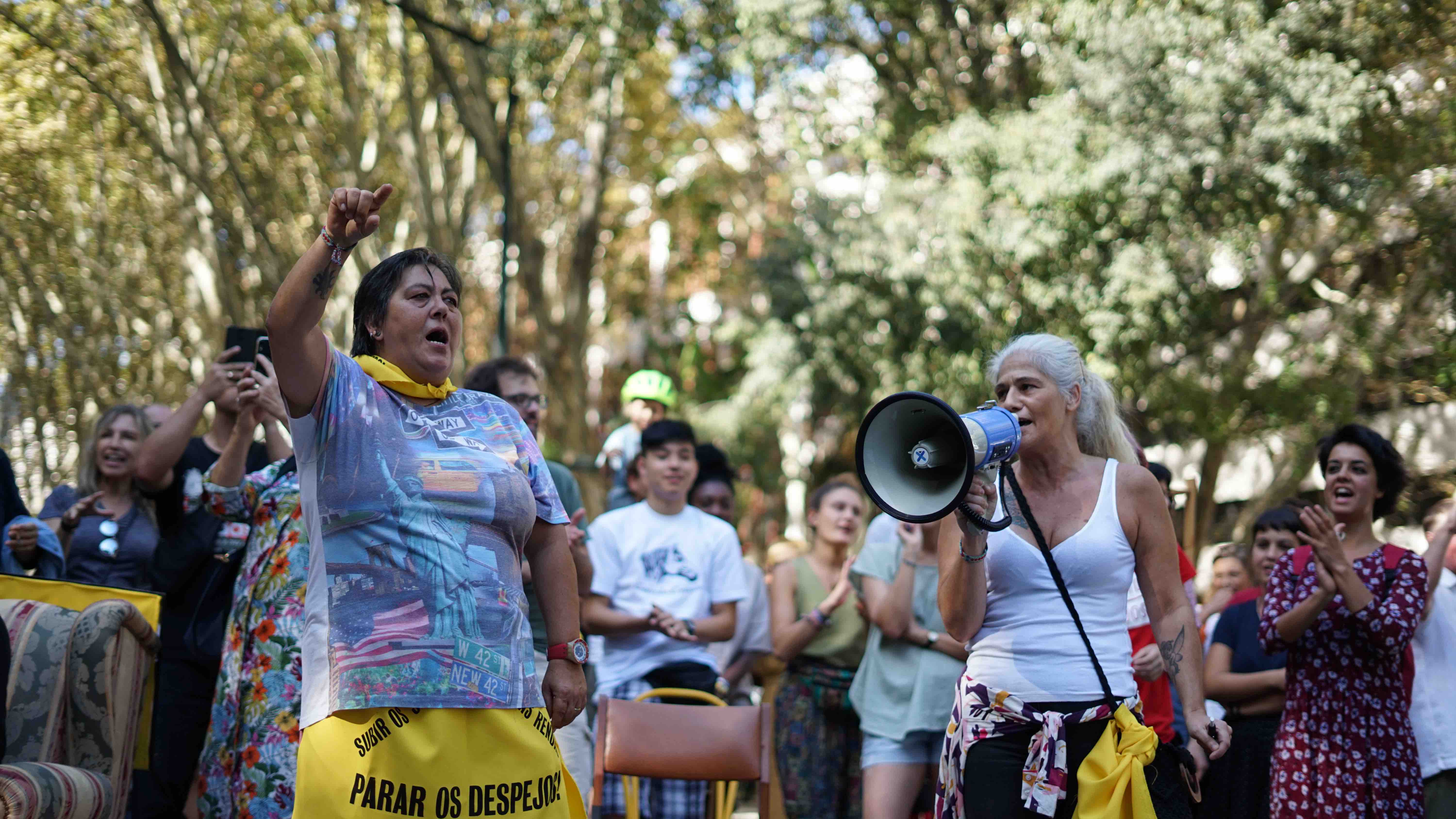 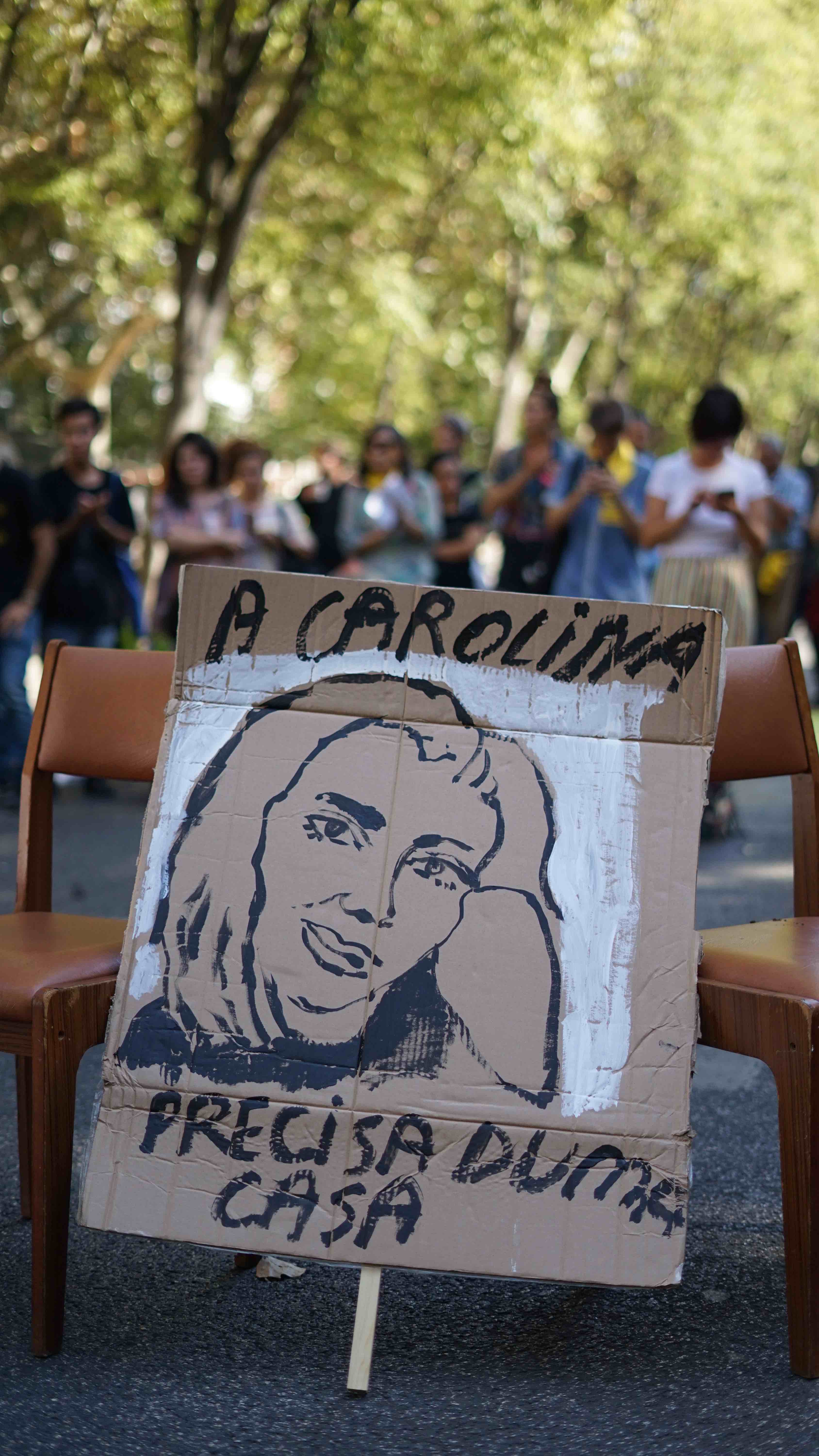 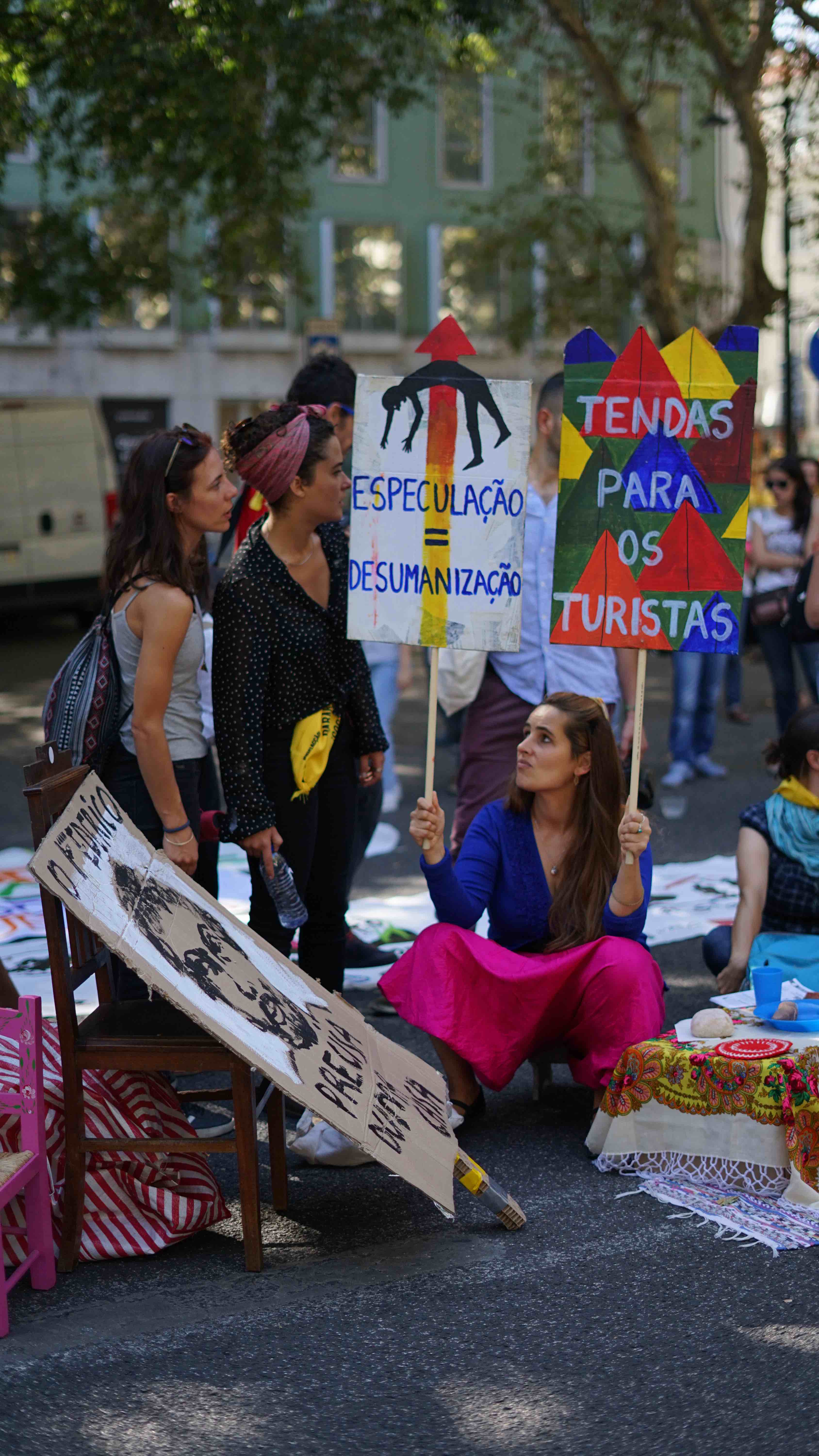 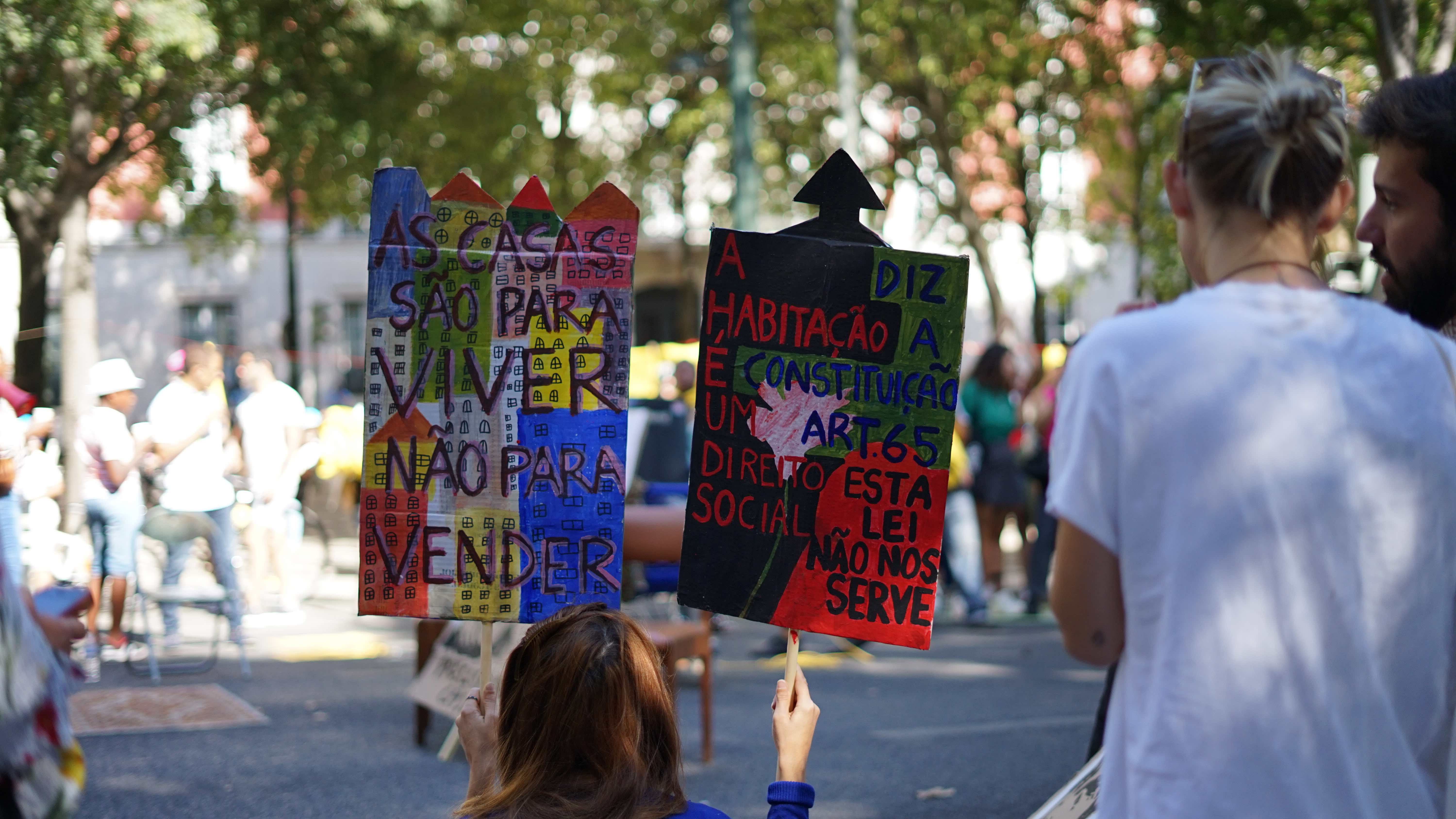 Festival Habitacção received some funding from the Berlin-based NGO the Guerilla Foundation.

Linkedin
RELATED ARTICLES
OTHER ARTICLES
Thousands attended the annual event this year to wheelie through the city and call for ‘knives down, bikes up’.
The idea that a younger generation is abandoning work has become a popular narrative online, but it doesn’t necessarily reflect reality.
A 37-year-old woman shares how her abortion led her to become a clinic worker, and the abuse she’s received in that role.
With skyrocketing rents, packed out viewings, bidding wars and more, renting in London has never been harder.
Birdy Chu reflects on documenting the historic moment in which the territory was formally passed back from the UK to China.
As the Scottish government announces a rent freeze, an activist with Living Rent who fought and won shares how they did it, and what must come next.