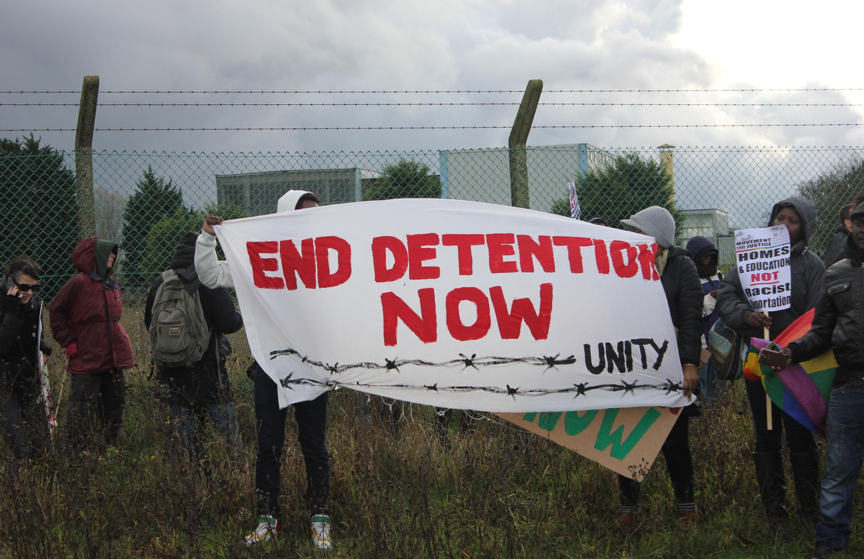 A new report highlights how conditions faced by those seeking refuge in Britain "fundamentally lacked decency", as campaigners will once again protest this Saturday calling for an end to detention.

Instead of welcoming refugees and asylum seekers to the UK with open arms, the British Government continues to lock many arriving away in indefinite detention, punished for nothing more than holding the wrong passport as they reach these shores. Calls for the closure of these quasi-prisons have been intensifying, as those inside and out call for compassion and humanity.

As a humanitarian crisis facing Europe continues, the British Government faces fresh criticism today after a damning report highlights the inadequate and inhumane conditions that refugees have been facing upon arrival in the United Kingdom.

“Detainees did not have their basic physical needs met and conditions fundamentally lacked decency,” Peter Clarke, Chief Inspector of Prisons said, after an unannounced inspection of the short-term holding facilities at Dover and Folkestone in Kent.

On 7 September 2015 an unannounced inspection was conducted of the facility, during which it was revealed that a new overflow facility, the Longport freight shed, was “a wholly unacceptable environment in which to hold people”. It transpired that more than 500 people were held there in just over a month, including 90 children. Detainees had insufficient food, and conditions lacked decency and were unhygienic.

Another facility, the Dover Seaport, was crowded and poorly ventilated, was not designed to hold people for more than a few hours and had no sleeping facilities, but from July to September more than 2,700 detainees were held there for an average of over 18 hours, including 381 children.

Located by the Channel Tunnel, a route through which many risked their lives to make it to British soil, the facility faced a substantial increase in referrals over the summer. Inspectors and campaigners have made it clear this is no excuse for the treatment faced by refugees from Eritrea, Sudan, Syria and beyond.

“This report is the latest in a string of reports, investigations and exposures about the conditions in immigration detention facilities,” Karen Doyle, from campaign group Movement for Justice told HUCK. “The abuse of detention cannot continue, these reports must result in action and 2016 must be the year detention centres start to close”, she continued.

“There would be no need for these short term facilities at Dover to exist if there was a safe passage for people seeking sanctuary in the UK.”

Campaigners have long been calling for the closure of detention centres in Britain, arguing the indefinite imprisonment of those seeking refuge and safety in the United Kingdom must end. The current policy enforced by the Home Office of detention  sees individuals suspected of visa violations and those subject to deportation held until a decision is made on their case.

According to the All Party Parliamentary Group on Refugees, the UK is the only country in the European Union not to have a time limit on detention. This Saturday, thousands of activists will descend on Yarl’s Wood immigration detention centre, the latest in a series of protests calling for the facility to be shut down. In 2015, a report found that the women’s only centre was a “place of national concern”.

“For a short time the Longport freight shed was temporarily used to accommodate migrants on their arrival and ease exceptional pressures on our existing screening centres”, Immigration Minister James Brokenshire told HUCK. “This was not acceptable and we are clear it will not be used in this way again.”

“Since this inspection we have improved the facilities at Dover Seaport and continue to work on plans to open a new centre to deal with clandestine arrivals at Kent ports.”

More information on the protest at Yarl’s Wood this Saturday can be found here.

Linkedin
RELATED ARTICLES
OTHER ARTICLES
Up-and-coming UK artist and photographer Harry Cartwright on inspiration, his love affair with LA, and the next steps.
It took Thomas Morris three years to write the book of his dreams. Then he scrapped it, sat down, and wrote the truth.
After the release of their debut LP last week, we talked to Philadelphia/LA duo Girlpool about the desire for new scenery and the need for constant change.
In a new era of global activism, are celebrity leaders a thing of the past?
A pretty portrait on the wall is all good and well, but shouldn't we be celebrating art that makes an impact in the real world?
McSweeney's founder teams up with playwright for a screenplay about a Yemeni-American cop in San Francisco.