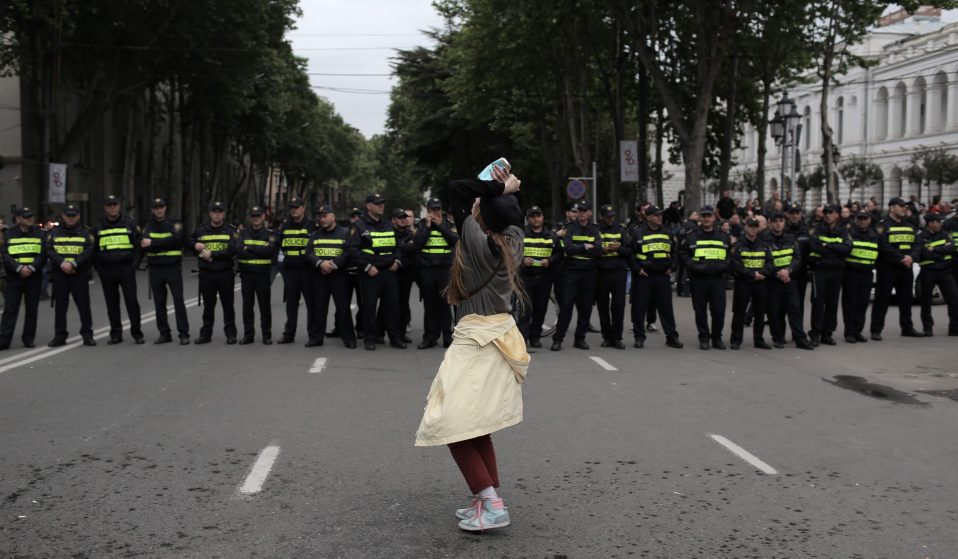 Earlier this year, Tbilisi’s clubs were aggressively raided by armed police. We look at what’s changed since, and how it affected the city’s burgeoning underground music scene.

Earlier this year, Tbilisi’s clubs were aggressively raided by armed police. We look at what’s changed since, and how it affected the city’s burgeoning underground music scene.

In the early hours of Saturday, May 12, 2018, Georgian Special Police units armed with automatic rifles stormed two renowned Tbilisi nightclubs, Bassiani and Café Gallery. Both Bassiani’s co-founders Tato Getia and Zviad Gelbakhiani were arrested, while dozens of clubbers were detained.

The raids came after five drug-related deaths in Tbilisi just weeks before, which authorities claimed were connected to the clubs, despite none of the deaths occurring in the venues. By early evening on the same Saturday, around 4,000 demonstrators had converged outside the Georgian Parliament building on Tbilisi’s Rustaveli Avenue to protest against what many saw as excessive police force.

As live broadcasts of the protests were transmitted worldwide, the Georgian capital of Tbilisi was thrust into the global spotlight with scenes of the several thousand strong crowd dancing amid scarlet smoke. The mood was optimistic. Electronic music pulsated from speakers erected on the steps of the parliament building, and protesters made their discontent clear not through violence, but by dance. 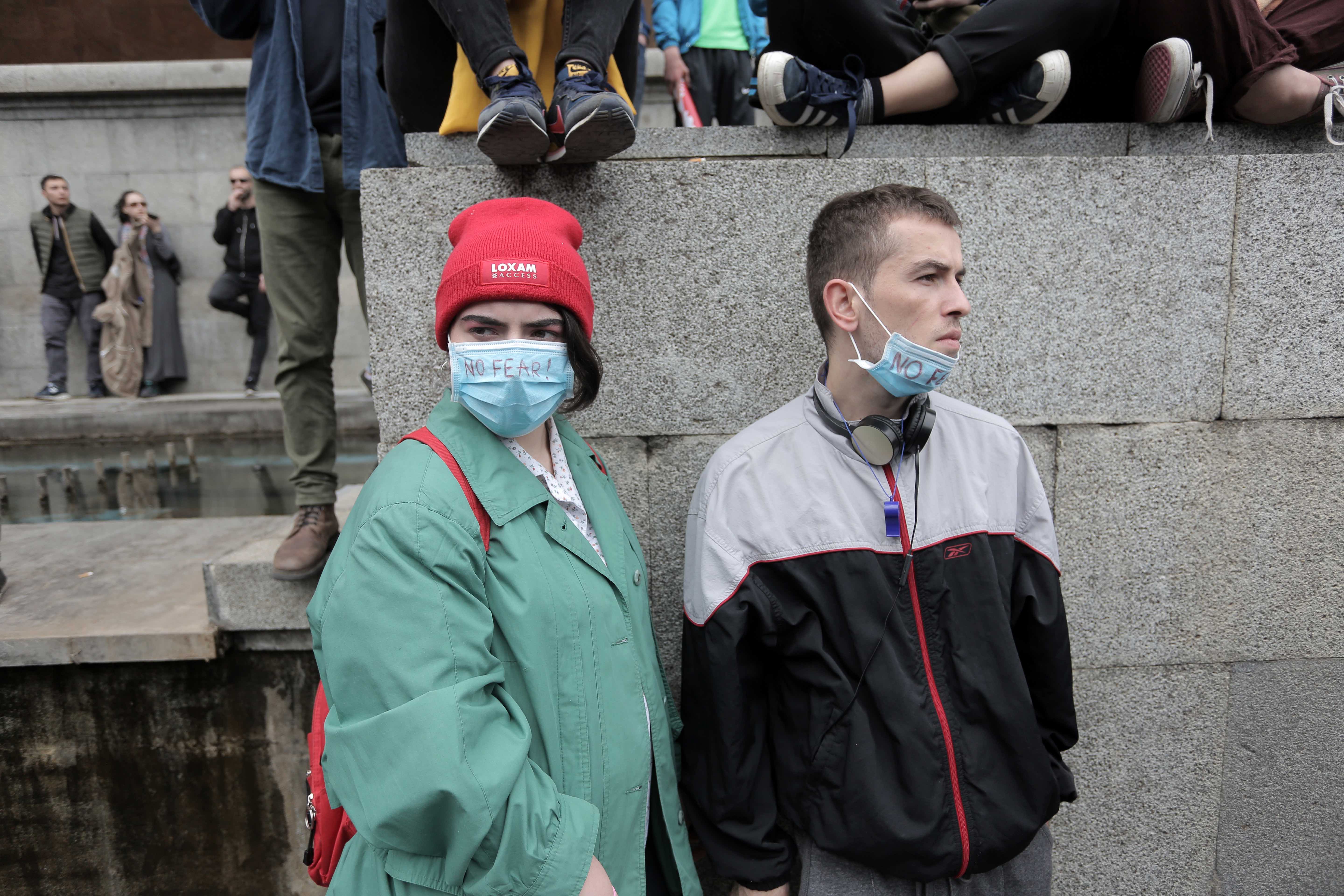 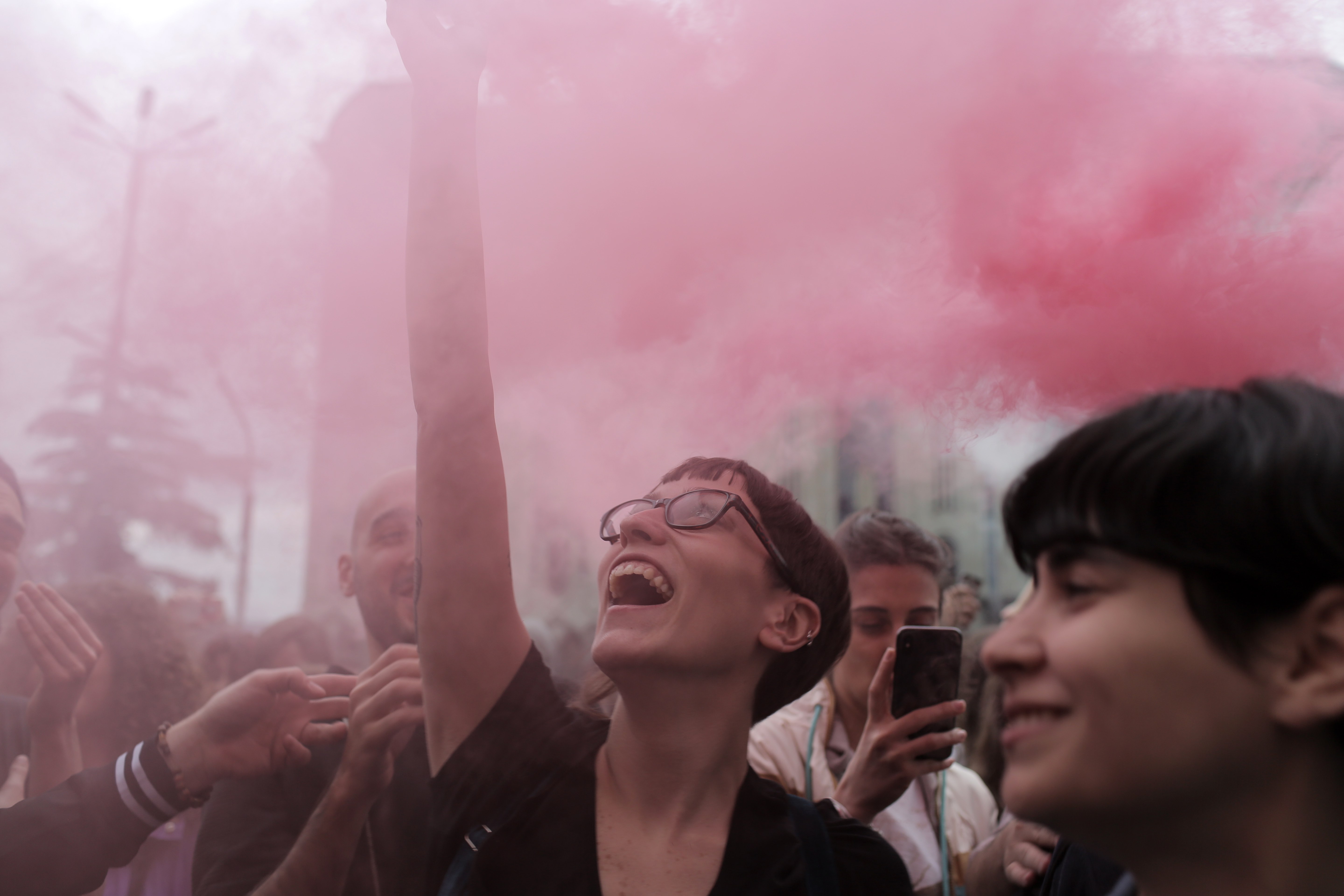 “A great positive energy was in the air,” recalls 42-year-old architect and protestor Irakli Zhvania. “Young people took the raids as a violation of their rights; a demonstration of police and state power. People rebelled, but peacefully. There were people who never do drugs, some who never go to clubs, but they came to support freedom and protest.”

Now three months have elapsed and on the surface, things appear to be back to normal. “Although three months isn’t a short time,” says 20-year-old student Marta*, “the atmosphere in clubs is as energetic and free as it always was, but sometimes it’s also tense. It’s really hard for us to forget what happened in May. Each time I’ve been to Bassiani since, I have this nervousness. Most of the time when we’re in the club, it feels exciting, but you can also feel that in the excitement, there is also fear.”

Divisions in Georgian society were highlighted by the events in May. On Sunday 13, after the raids, a heavy cordon of riot police stood guard as the crowd faced a counter rally from far-right, ultranationalist groups, who referred to the protesters as ‘drug dealers and LGBT propagandists’. 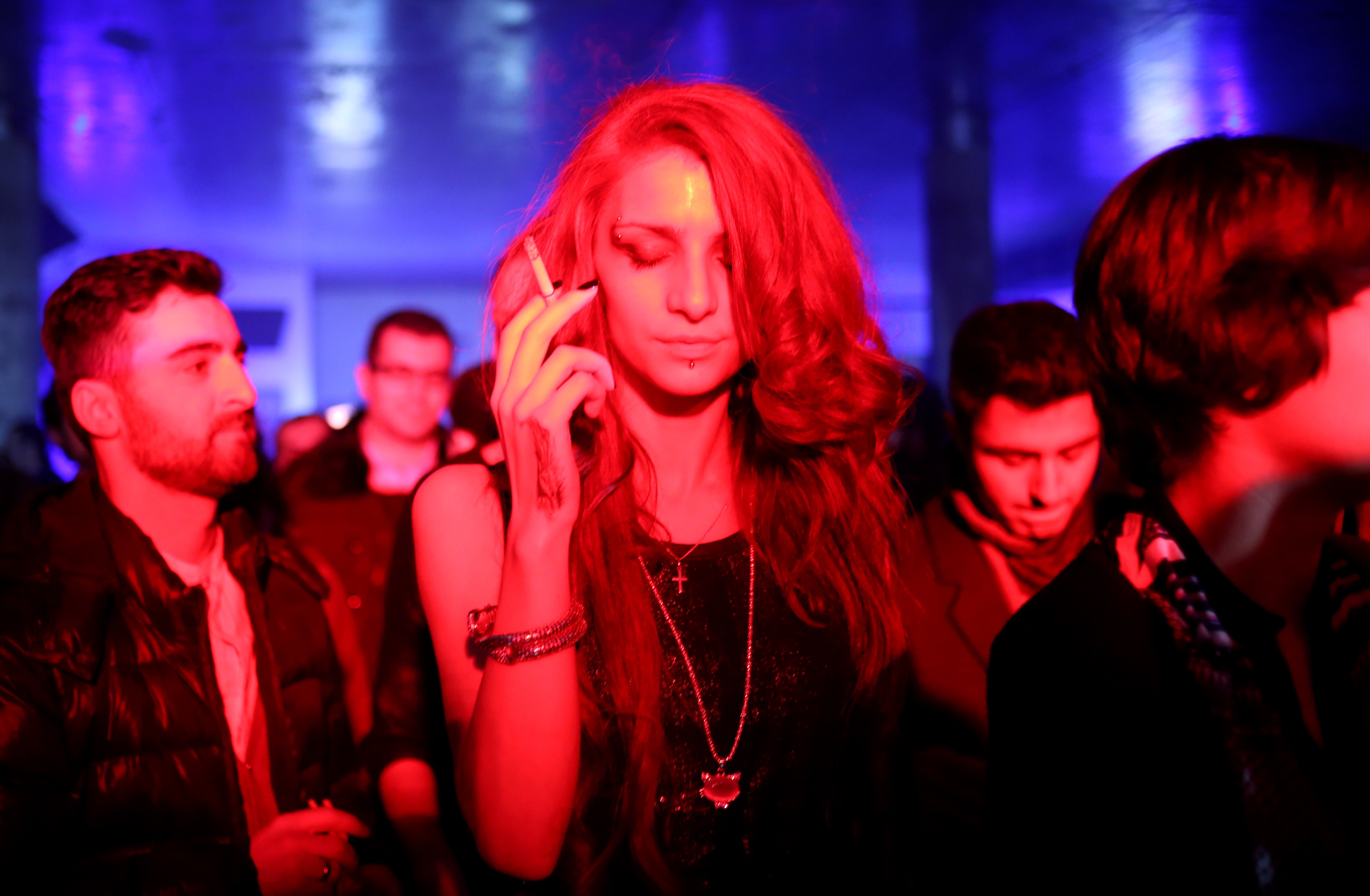 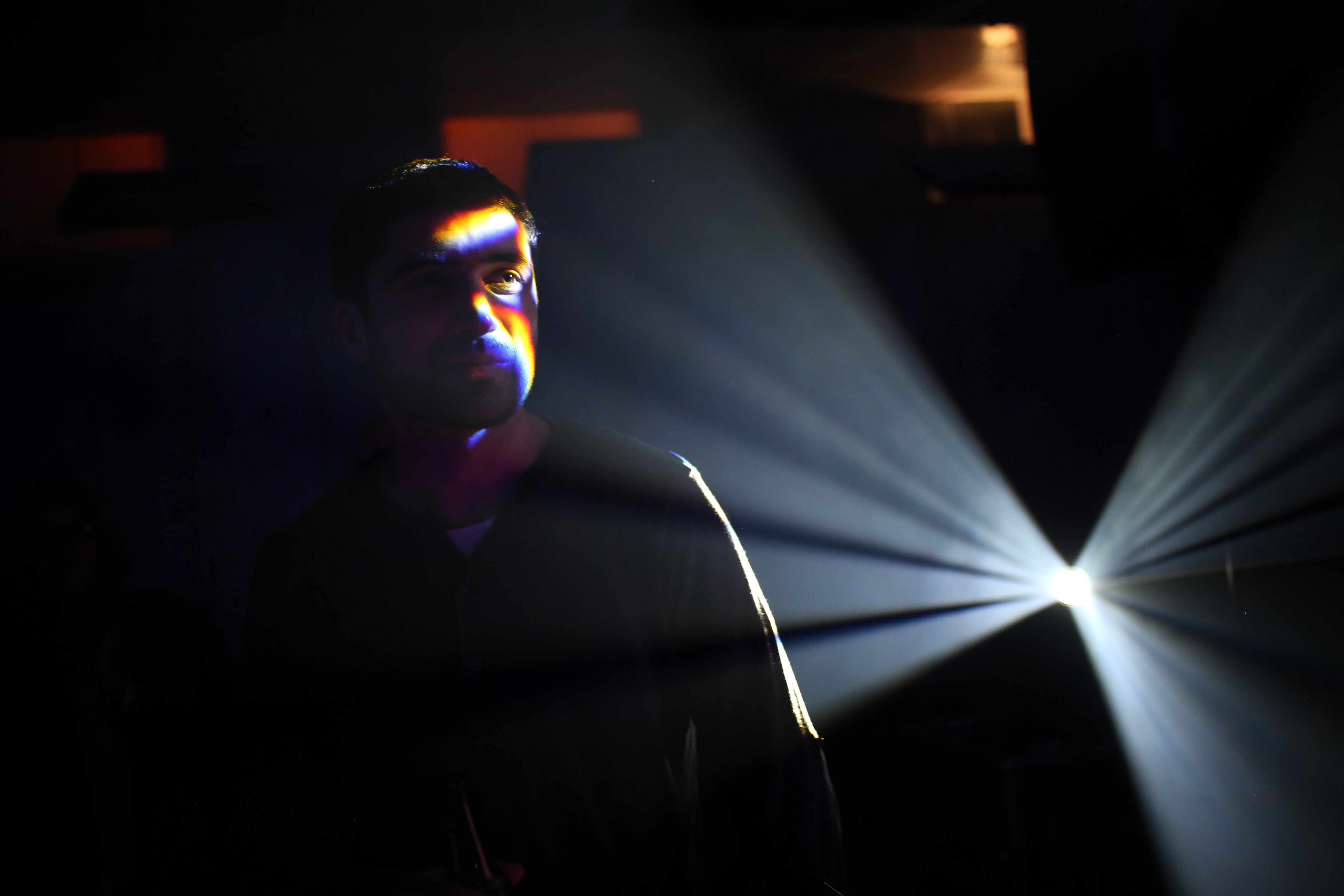 “The new generation made a statement – and a very strong statement – that they stand for human rights,” says DJ and producer Irakli Kiziria. “It also made clear that the media and some decision-makers from the political side understood these values, which was very interesting to see. What has changed is that this topic has become more visible. In every part of society, people talk about it. Dancing was a form of freedom of expression before the events in May, and now even more so. People feel more attached to it.”

“At the same time, aggression from the conservative side of society is also rising,” he adds. “But I think this helps get a clearer picture to analyse where we are now, and where we want to go in the future.”

Bassiani draws people from across the globe to experience Tbilisi’s techno scene. Like Café Gallery, the club is explicitly LGBTQ-friendly, renowned for its queer parties – notably Horoom. They both stand for tolerance and diversity, embodying progressive values in what is a predominantly conservative country. Homophobia remains rife in Georgia; in the 2014 World Value Survey, it was ranked among the most homophobic countries in the world. 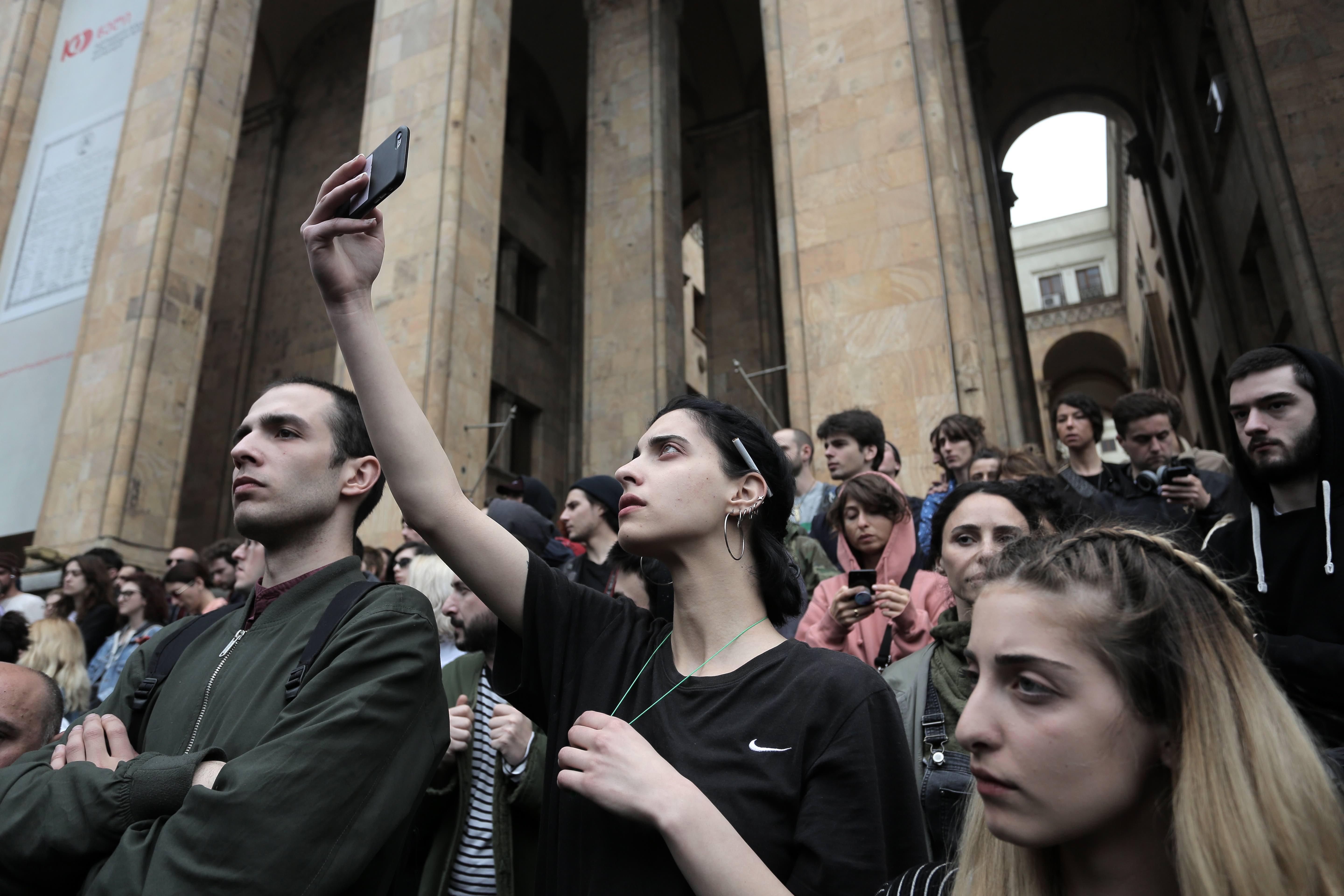 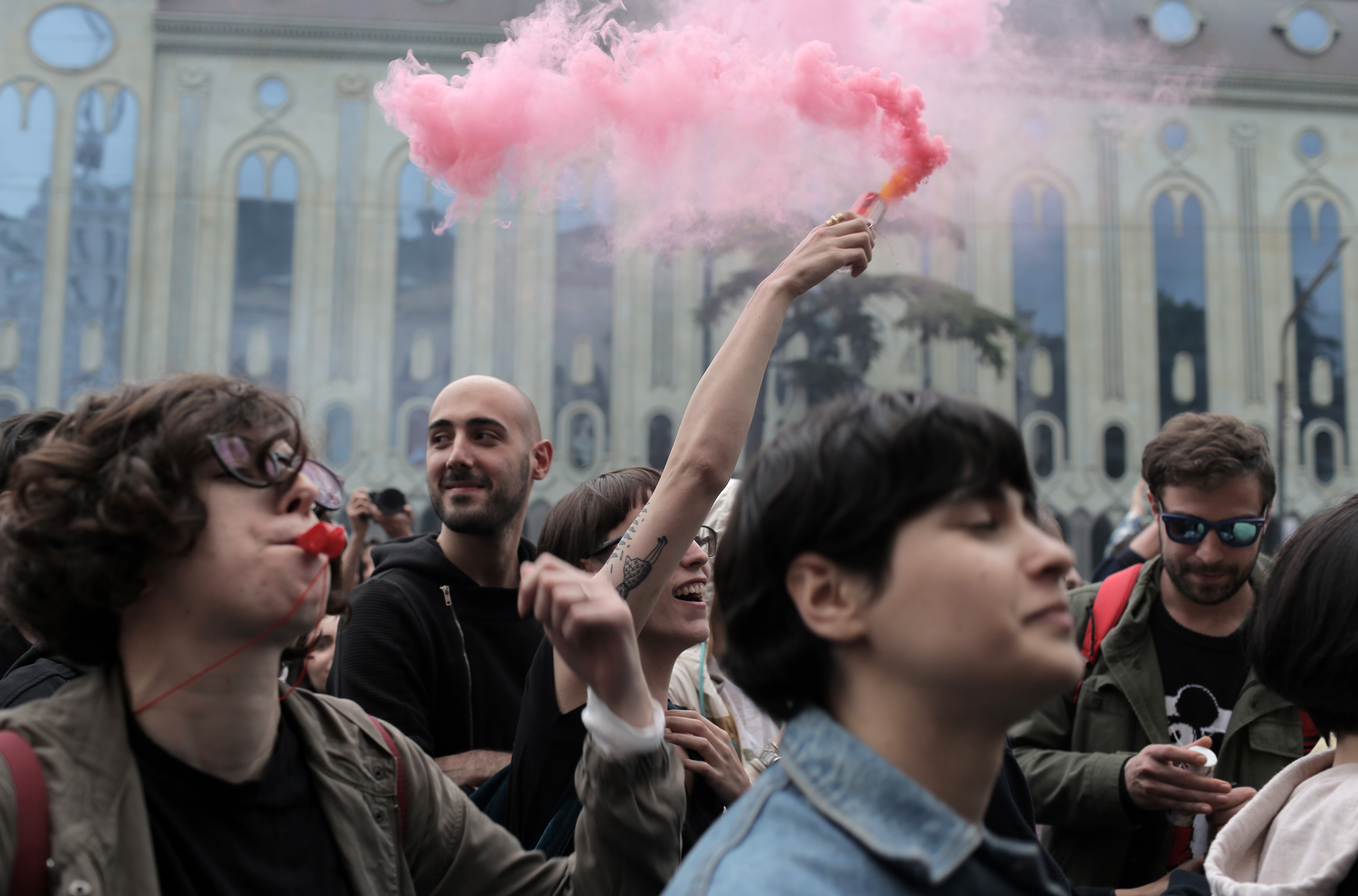 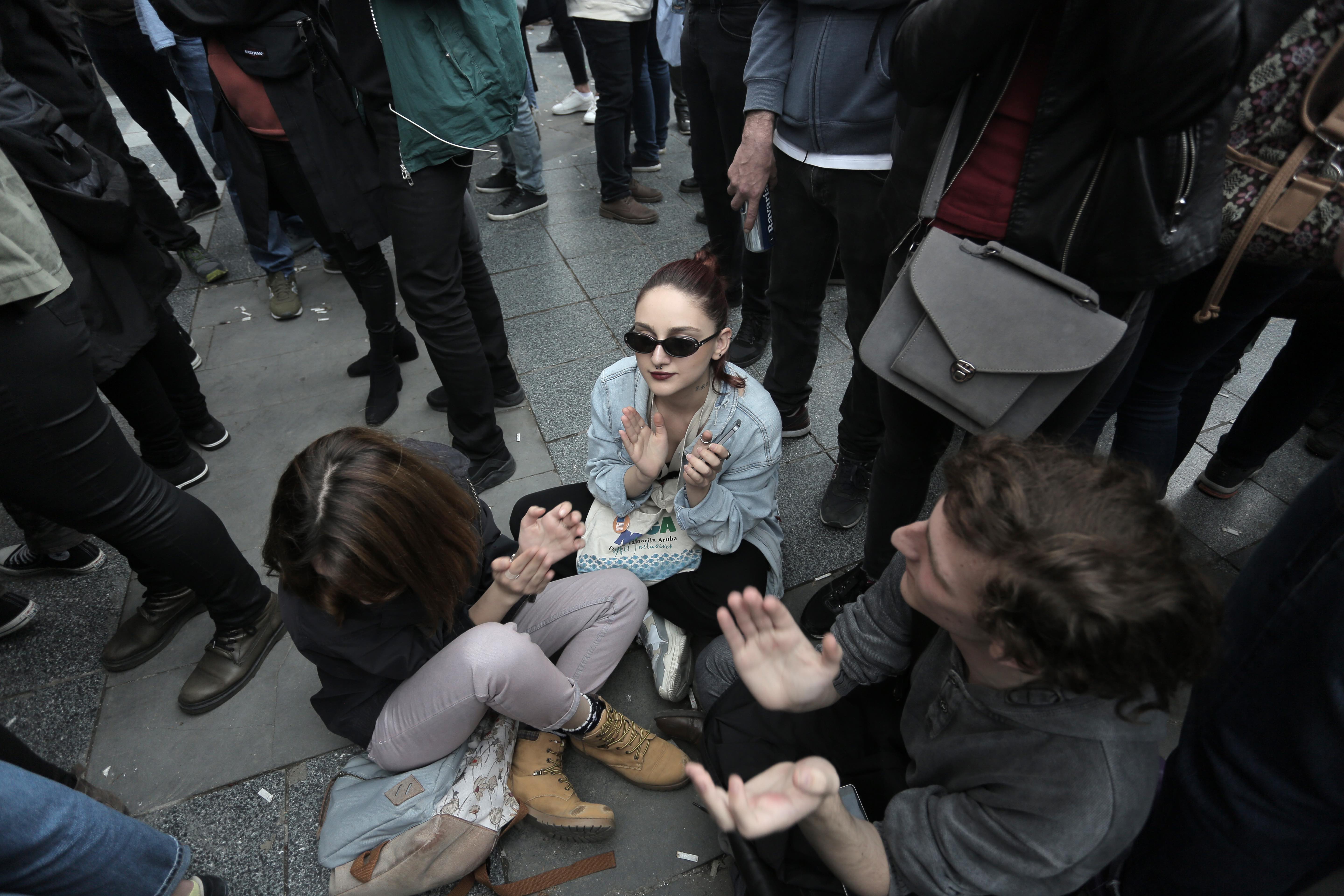 “What I hope will change in the future is that people will become more open-minded and that there won’t be so much hatred between different people,” says Marta. “I also hope that the government will realise that it’s not right to intrude people’s personal spaces. I hope that ravers will get their safe haven and not have to worry every time they go clubbing.”

As well as standing as a pillar of resistance against hatred and homophobia, Bassiani is also at the helm of the fight against Georgia’s zero-tolerance drug policy, partnering with the activist group White Noise Movement, which advocates for drug decriminalisation in the country.

According to reports from the Georgian Democracy Initiative, citizens can currently be subjected to life imprisonment for carrying one pill of Ecstasy, MDMA, LSD, or other so-called ‘clubbing drug’. The sentence for rape, however, is eight years, while for murder it is seven – 15 years. 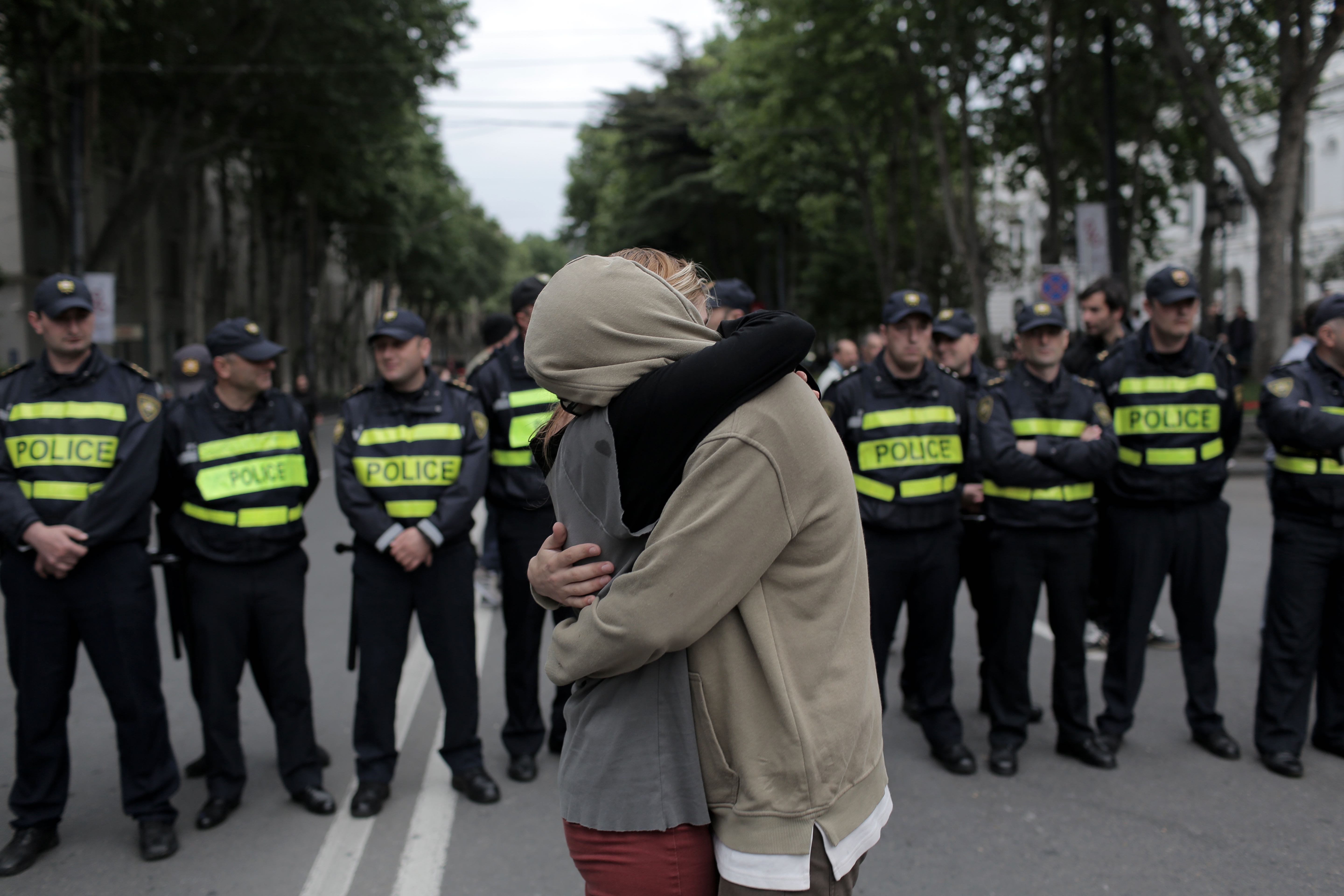 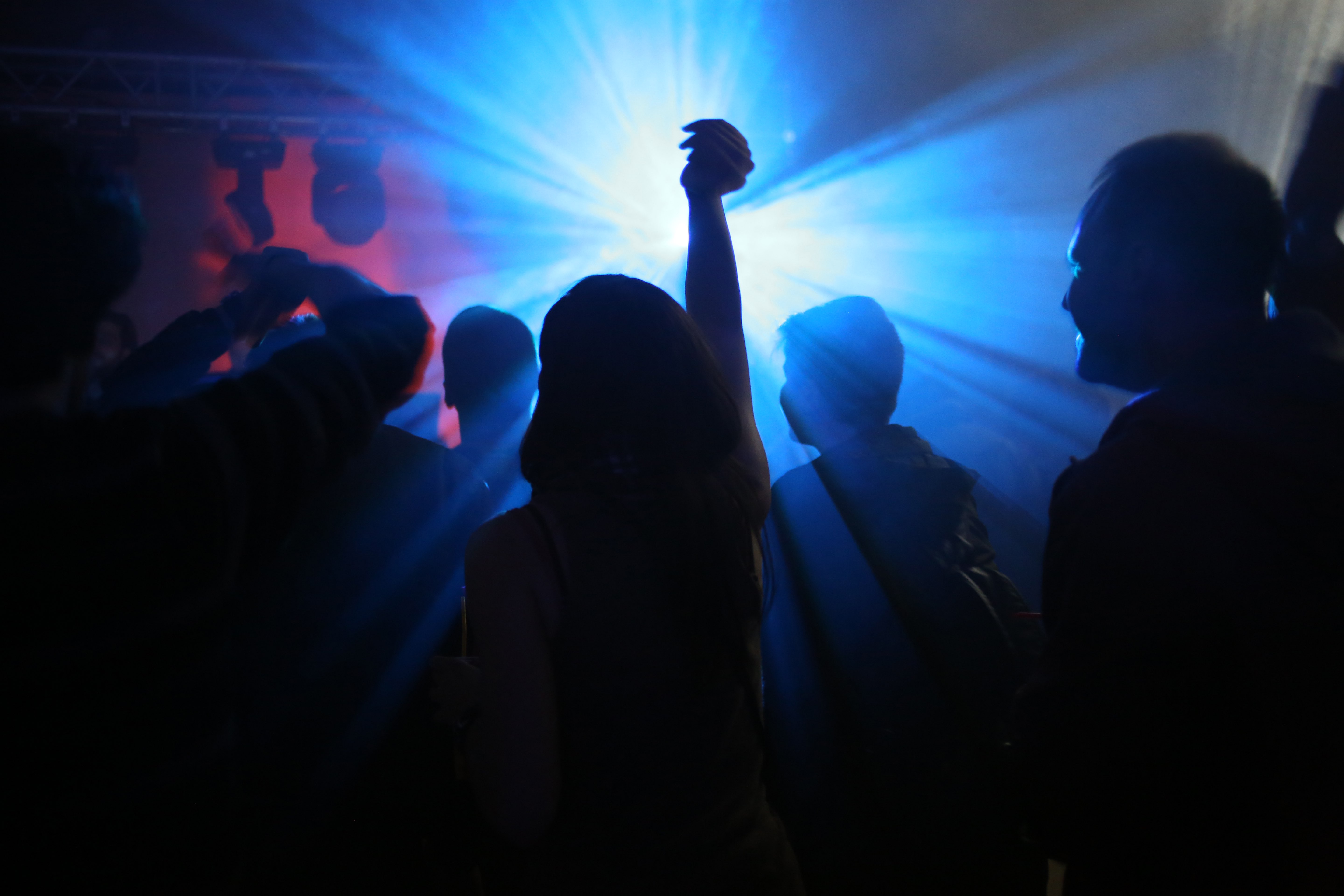 One positive outcome since the May protests has been the decriminalisation of cannabis consumption, which was quietly passed in July. “Because of the policy today, many innocent people are in prison,” Tamuna Karumidze, a documentary director and designer who attended the May protest, tells Huck. “The legalisation of marijuana was one of the biggest outcomes of the events in May [becoming one of the first post-Soviet republics to do so]. I can only hope that there will be more changes in that direction.”

Irakli Zhvania, who lived in the Netherlands for two years, recalls the so-called ‘cocaine alert’ in Amsterdam in 2014, when a bad quality substance sold as cocaine killed several people. In response, the city launched an information campaign with warning posters on the street and police went after the dealers and their sources. “This is how one fights drugs,” he says, “not by scaring a dancing crowd with an armed police squad.”

Even so, Zhvania believes the raids could bring some positive results. “I think these events increased awareness about how to correctly fight against drugs,” he says, hopefully. “It increased self-confidence in youth. They saw and believed they are the future. They have to fight for their rights and freedom, that they have a say and if they all stay together, they can shake the system.”

* Chose not to reveal surname.

Linkedin
RELATED ARTICLES
OTHER ARTICLES
Yesterday, rail workers came together to protest poor pay, working conditions and job cuts in their latest round of strikes.
A sharp increase in officers armed with the electrical weapon is resulting in serious injuries and deaths.
The government’s brutal crackdown on NGOs has left victims of rape without anywhere to seek help. And now, as the country plays a key role is Russia’s war, things are only getting worse.
A series of photos by the late Jerry Dantzic taken in 1957 show a tender side to the iconic Jazz musician.
With the UK now set to run out of vaccines, people working in the sex industry – particularly outside of major cities – have been left especially vulnerable, reports Brit Dawson.
The author discusses her new memoir, which offers a sobering reflection on the racism and otherness she’s experienced along with a joyful celebration of her culinary heritage.