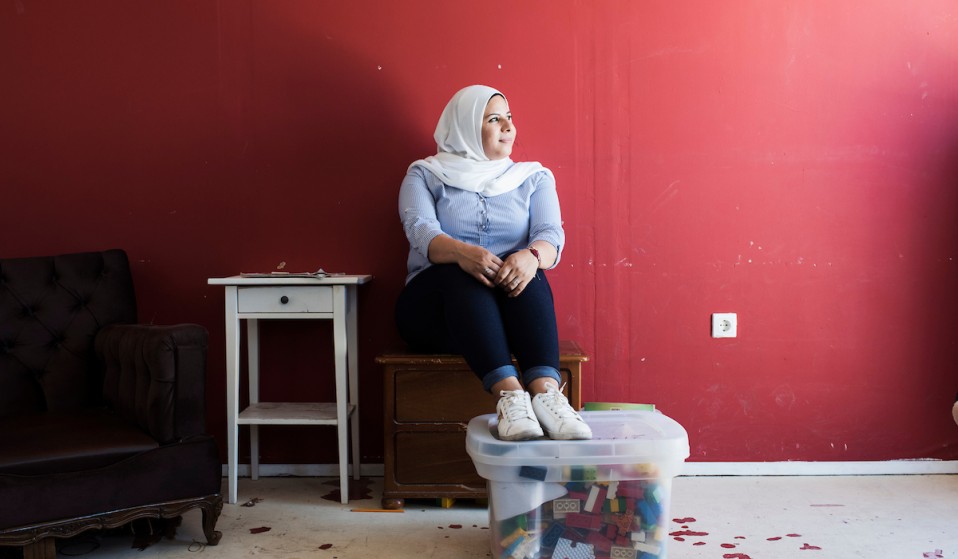 Skateboarding and circus take centre stage at Khora, a horizontally-organised refugee community centre in Athens, which is celebrating its first birthday.

Skateboarding lessons and circus shows take centre stage at Khora, a horizontally-organised refugee community centre in Athens, which is celebrating its first birthday.

In a brightly-muralled room, on the fourth floor of an old printing workshop in Athens’ anarchic Exarcheia neighbourhood, a bearded clown is making quite a racket. “EVERYBODY: ooooh la la,” he bellows. A packed room of ecstatic children yells back in unison: “Ooh la la.” We’ve walked in on The Flying Seagull Project, a UK circus troupe, performing at Khora, a vibrant community cultural centre run by refugees and volunteers.

While Greece struggles to escape the EU’s worst economic crisis, for the last two summers it has also been the epicentre of the European refugee crisis, with sometimes over a thousand people per week arriving on the islands of Samos, Kos and Lesbos, mainly on flimsy dinghies from Turkey. Hundreds have perished on the journey. 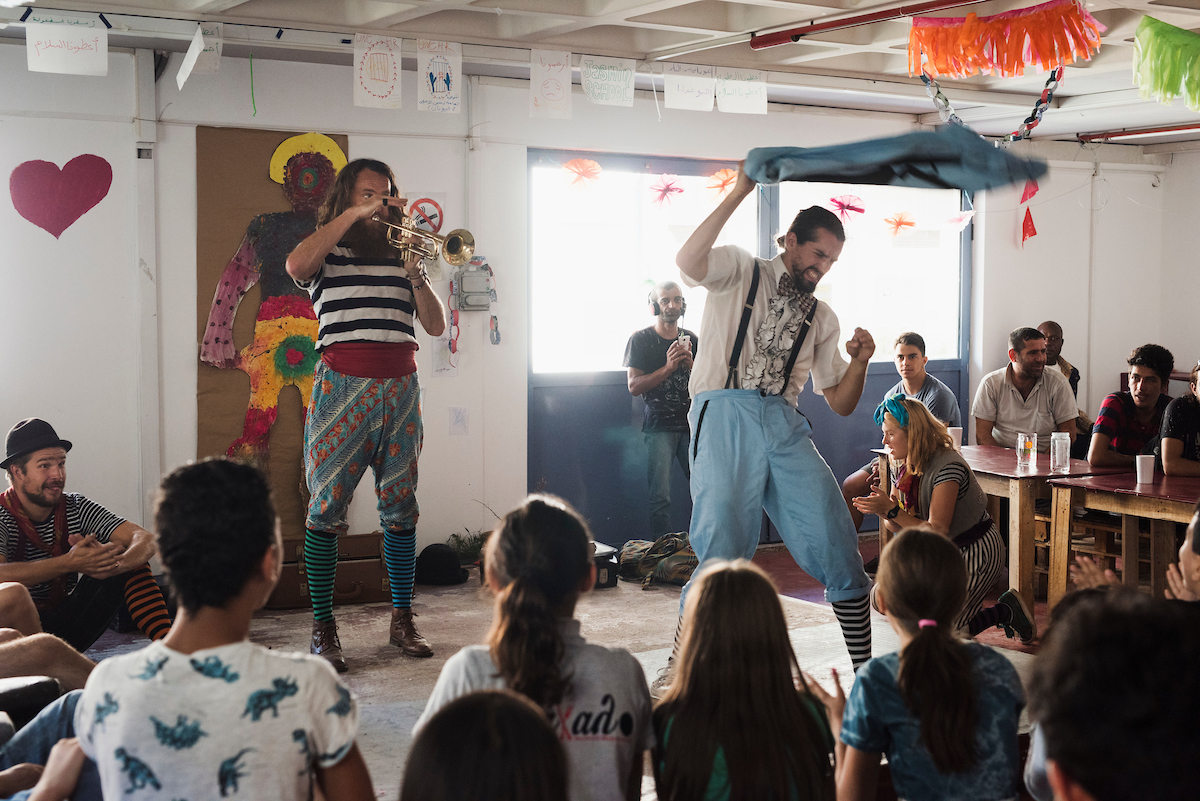 A circus performance by the Flying Seagull Project at Khora, refugee centre in Athens.

An American volunteer nurse put it best: “Come to Athens and you put a face to the war.” Walking around Khora (and on the streets of Athens) you’ll brush shoulders with Syrians, Afghans, Iraqis, Kurds, Sudanese and others from across the globe who’ve fled war and upheaval in their home countries. Most don’t want to be here. Greece was just the entry point, but now tens of thousands are stuck in limbo, after the rest of Europe pulled up the drawbridge.

Most provision for refugees is pretty depressing, and a majority have deliberately been housed in camps outside the cities or stranded on remote islands. Refugees sit on one side, while volunteers and aid workers often awkwardly keep their distance. There’s a feeling of hopelessness that hangs over everything. Not so at Khora. 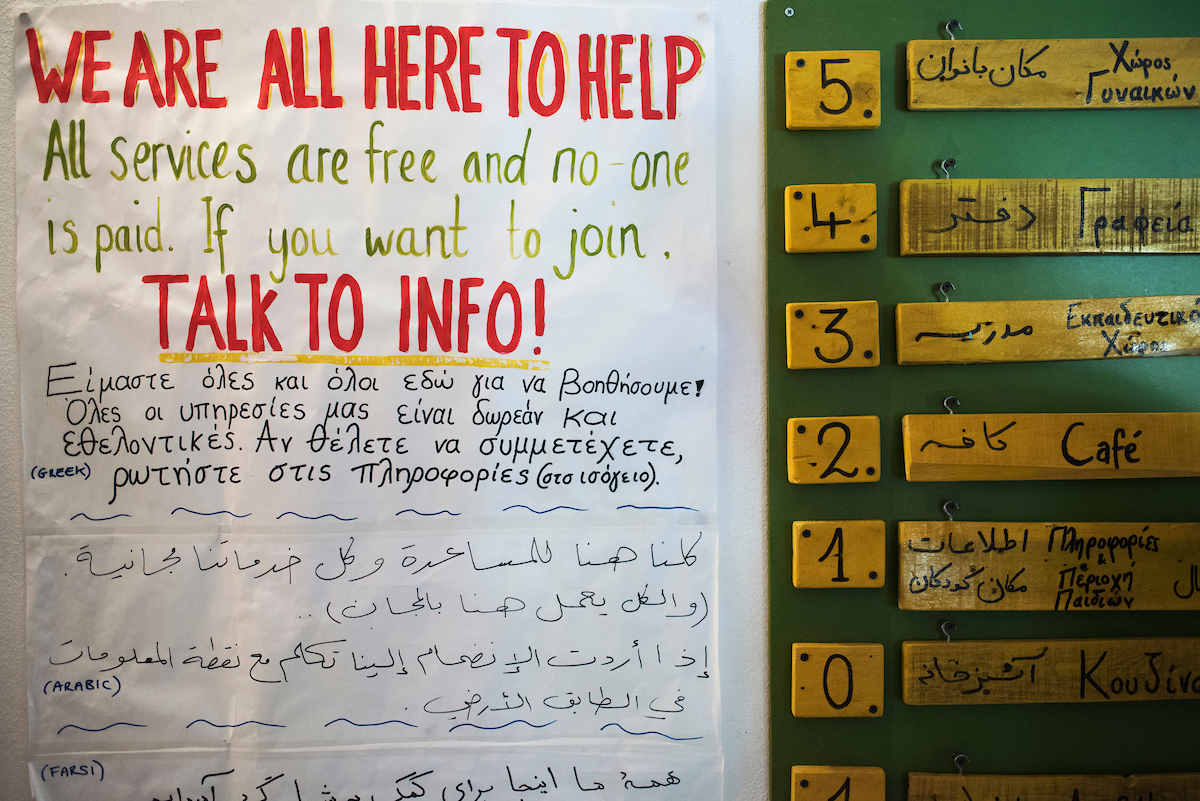 A notice board at Khora, refugee centre in Athens.

“Here we’re the same,” explains Somaya, a Syrian-Palestinian translator. “You can’t tell the refugees from the volunteers because we work and communicate together. We go for picnics, swim at the beach and have dinner together. We’re more than refugees and volunteers, we’re friends and family now.”

Khora is a non-hierarchical collective founded by refugees and volunteers who met on Lesvos, who believe in freedom of movement for all and making a radical challenge to the system of borders. It feels like an enormous grandma’s living room spread over eight floors, with kids running about everywhere and watched over collectively by a revolving cast of adults. Khora provides everything from language lessons to legal advice, childcare, dental services, free clothing and an open workshop to cooked meals for up to a thousand people per day. 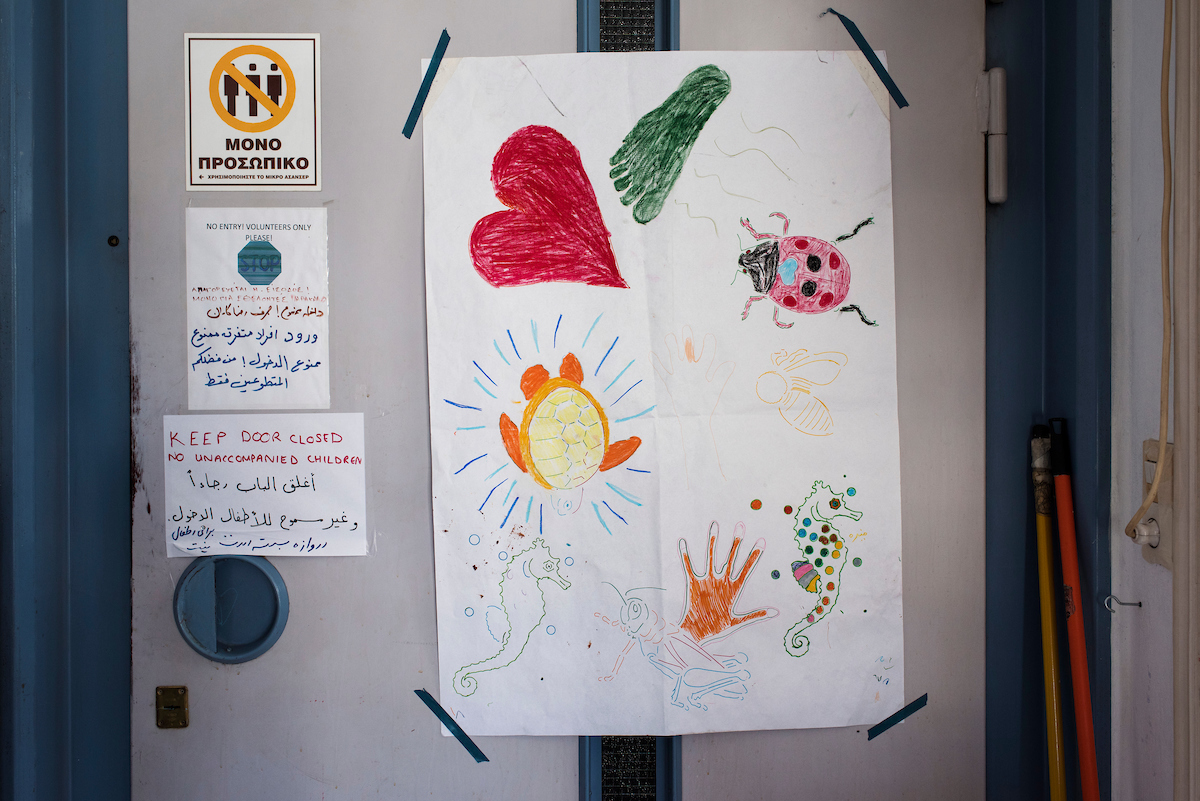 Kids drawings on the lift door at Khora, refugee centre in Athens. 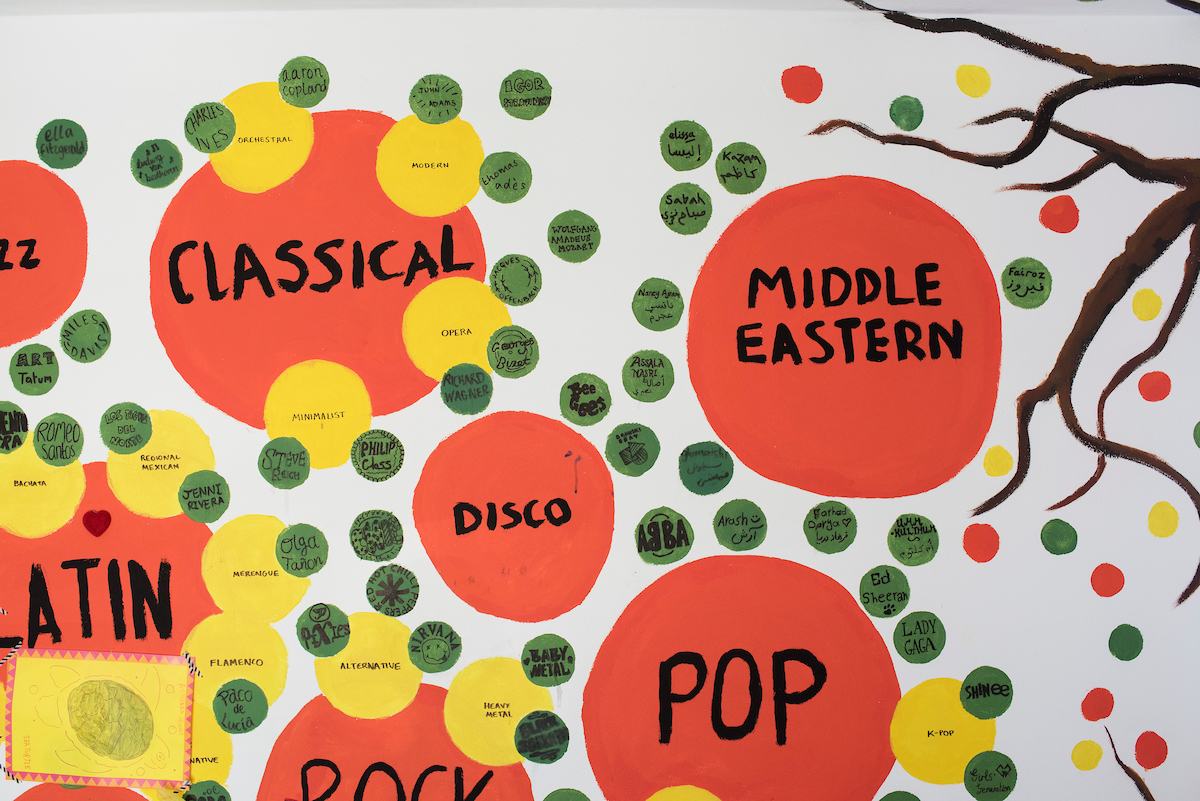 The music room at Khora, Athens.

In 2015, Somaya fled the Yarmouk Camp, established for Palestinian refugees in 1957 on the edge of Damascus, where ISIS have since carried out brutal killings. After passing through the squalid chaos of a government-run camp on Chios island, she arrived in Athens a year ago, discovered Khora and began work as an Arabic/English translator here.

“Sometimes on the metro people look at me like an alien,” Somaya says, her smile lighting up the room – yet her situation is far from carefree. “I often feel sad, it’s hard being a single mum separated from your family. We’ve all been through a lot, but I feel special here. I can work, help people and I have a say – that’s important.” 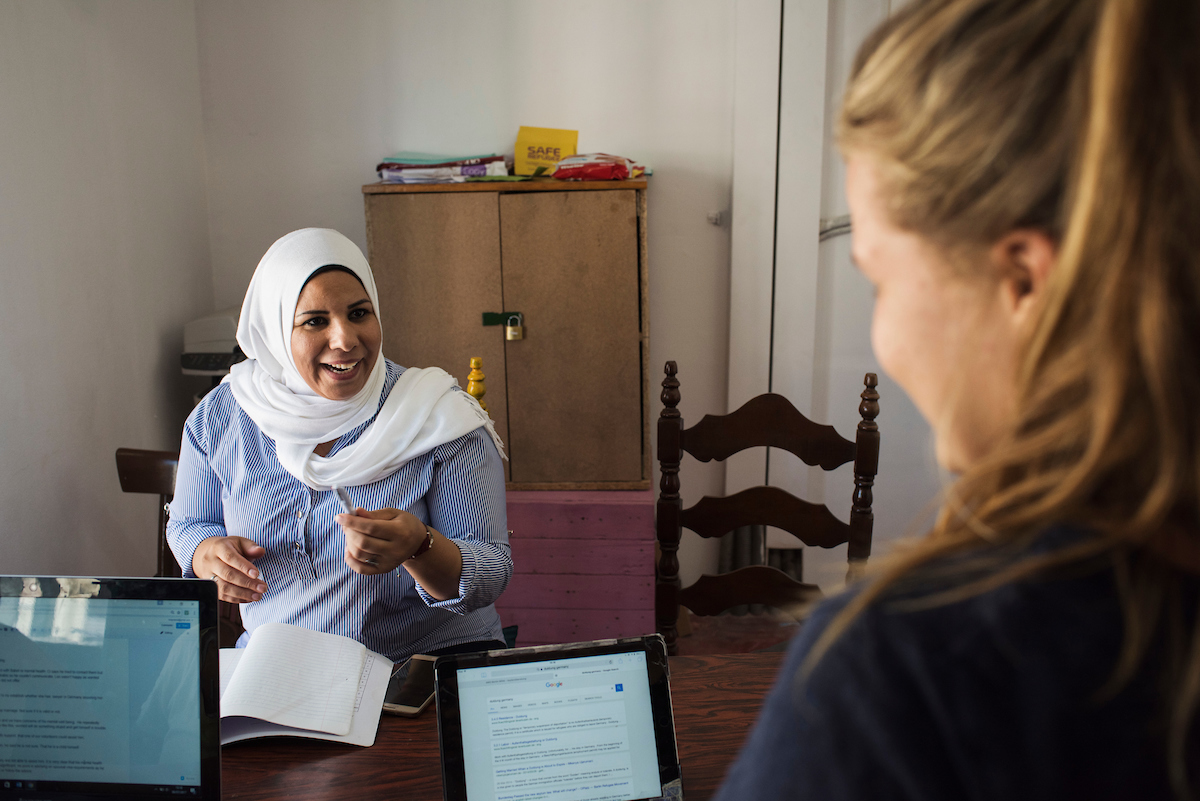 Somaya at work as an Arabic/English interpreter. 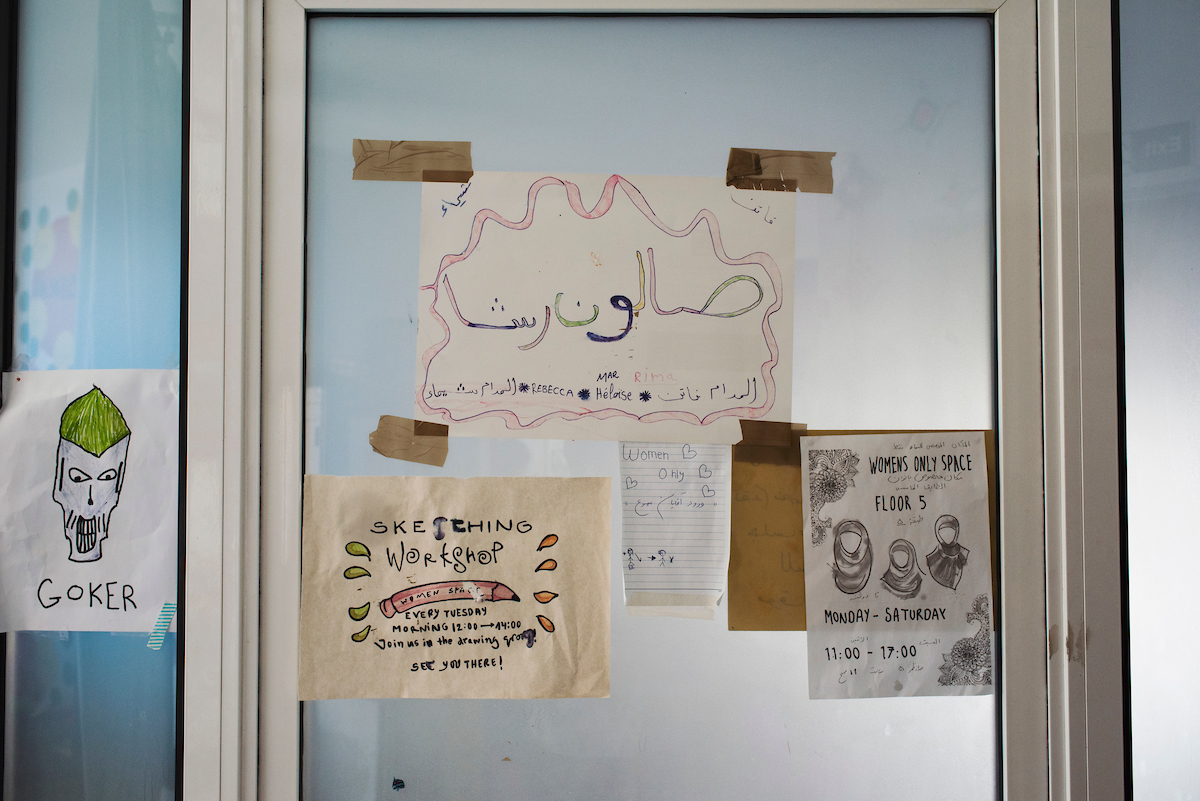 Posters on a door at Khora, refugee centre in Athens.

Despite what she’s been through, Somaya is one of the lucky ones – relatively, at least. Greece’s refugee crisis may have slipped out of the news since arrivals fell sharply after a much criticised EU-Turkey deal in March 2016. But arrivals to overstretched reception centres have risen again to more than 200 each day – proof of Europe’s inability to find a just and lasting solution.

In previous years, refugees who arrived on the islands were allowed onto the mainland after registration, and sometimes onwards towards Western Europe, until borders were closed in early 2016. Now, most arrivals are held on the islands and, despite promises from other European nations, refugee reunifications have slowed dramatically, causing a huge bottleneck. Terrible camp conditions have deteriorated further, leading to riots and violent outbursts. It’s a great welcome to Europe, especially for the 40% of new arrivals who are children. Waiting lists for unaccompanied minors to be housed in shelters in Greece have passed 1,500. 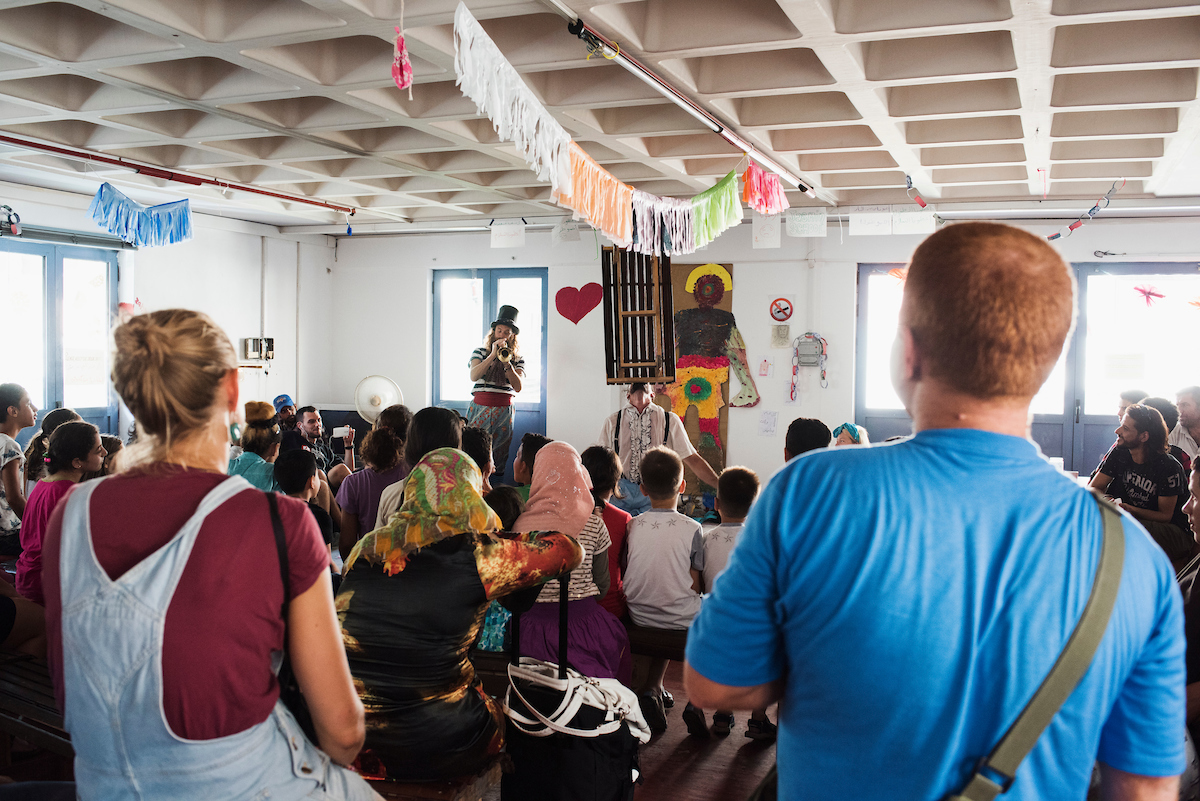 A circus performance by the Flying Seagull Project at Khora, refugee centre in Athens. 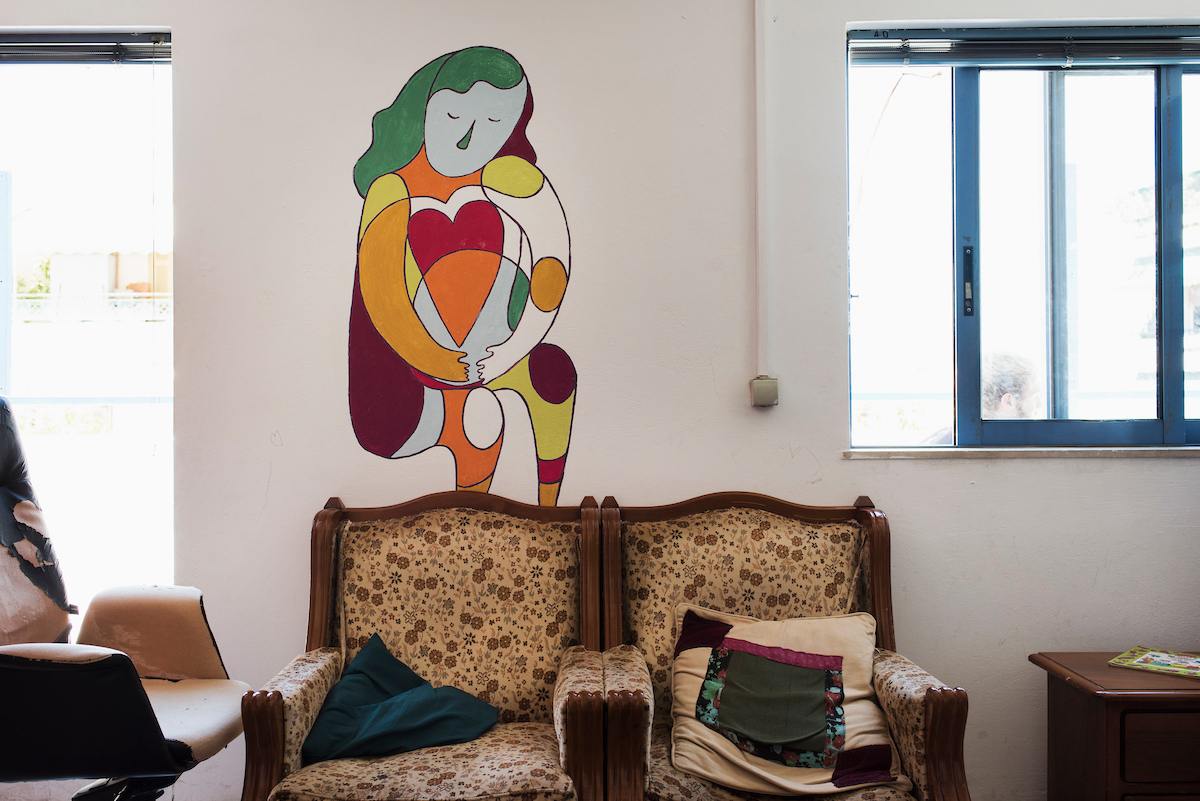 A wall at Khora, refugee centre in Athens.

Khora take a more radical position than most refugee NGOs, and they’re prepared to call out the failings of governments and aid agencies when they see them. They argue that the response to the crisis, led by the EU, has been an appalling affront to human rights, so they take no grants from government bodies or international NGOs like UNICEF – also to resist being swayed by big donor priorities. Instead, they’re funded primarily by grassroots organisation Help Refugees, which allows them a greater degree of flexibility and autonomy. “If you want to make something happen, all it takes is bringing it up at the community meeting on Tuesdays,” explains Will Ascott, as he gets Free Movement Skateboarding’s weekly class for Khora kids underway, in a nearby park on a hill overlooking Exarcheia.

As Khora prepares for its first anniversary celebrations, the team has a lot to be proud of: it has provided everything from food to legal advice, circus shows and skateboarding lessons for the thousands who have passed through its doors in the past 12 months, but most importantly, somewhere to belong and be respected as part of the community. 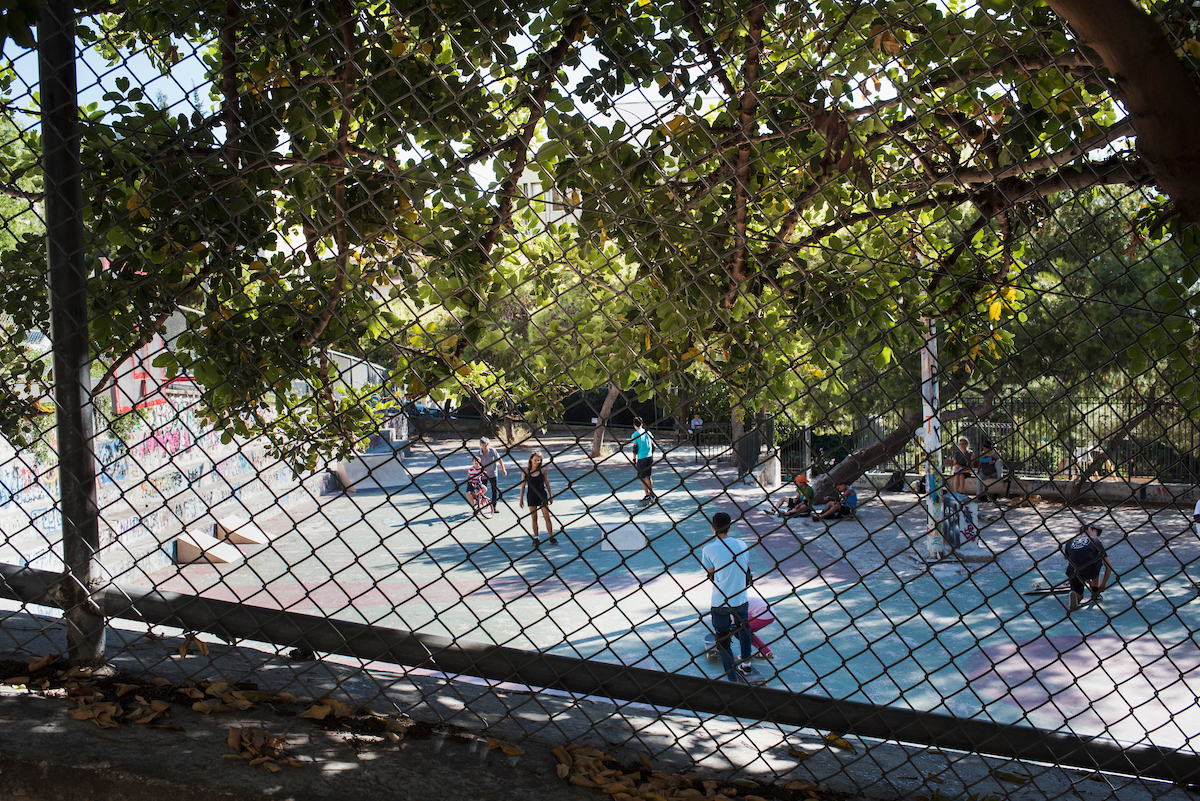 Refugee children taking skateboard classes at the Free Movement Skateboarding run by Will Ascott and Ruby Mateja in Exarhia, Athens. 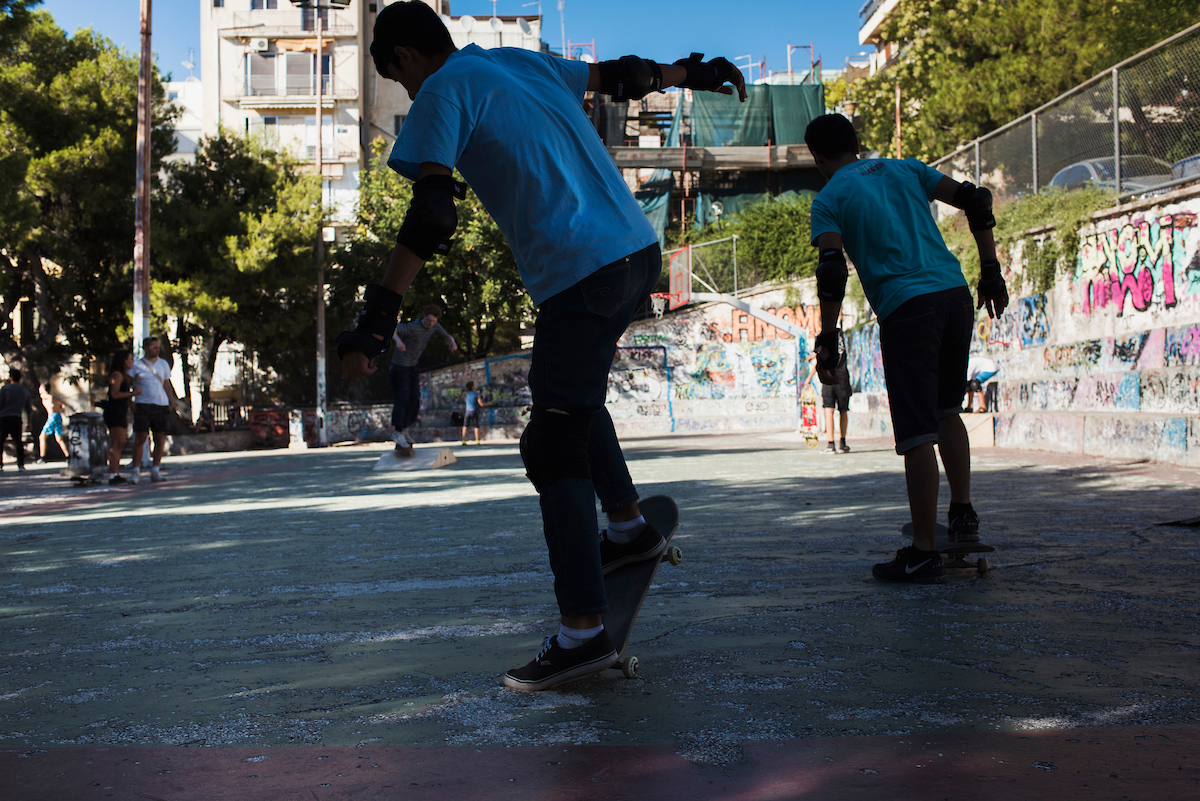 It also marks two years since EU member states pledged to relocate 160,000 asylum seekers – including 106,000 from Greece and Italy – in September 2015. Khora’s birthday party forms part of mass demonstrations across European capitals this week to condemn the 28-nation bloc for relocating a mere 29,000 to date.

Khora will join refugee groups from across Greece for a peaceful march through Athens on Saturday September 30, from Omonia Square to Pedion tou Areos Park, for an afternoon of talks, workshops, food, interactive art, and then an evening of global music, DJs and dancing. You can follow events throughout the day with the hashtag #SickOfWaiting.

But while it seems like governments have done everything they can to disorient, disempower and discourage refugees from taking control of their destinies, these guys aren’t sitting around waiting. Khora have shown that when refugee communities organise and take matters in to their own hands, there’s no limit to what they can achieve.

Find out more about Khora Community and join their first birthday celebrations in Athens on Saturday September 30.

Linkedin
RELATED ARTICLES
OTHER ARTICLES
A new law change is enabling Britain’s donor-conceived children to know the truth about their origins – but campaigners say the fertility industry must do more to protect people.
AI companies that develop image-generators using copyrighted artwork from the internet are coming under fire from artists who say that it amounts to theft.
A new podcast is opening up the conversation between trans women and trans amorous men in the hope of building coalitions.
A recent High Court ruling against the right to wild camp in Dartmoor National Park sparked the largest land protest in history – and campaigners say their fight is not over yet.
Since 2007, Gideon Mendel has made 20 trips to document floods in 13 countries. The result is an alarming record of what has already been lost to the climate emergency.
After fleeing the war in Ukraine, people are finding it impossible to secure affordable and decent housing in the UK.