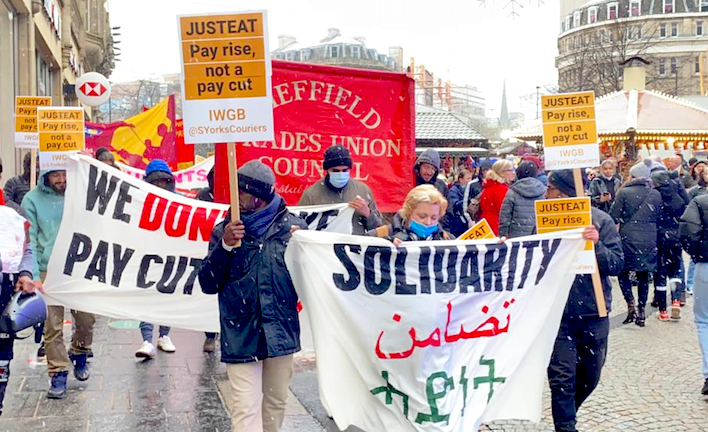 In Sheffield, food delivery drivers are fighting back against one of the giants of the gig economy.

In Sheffield, food delivery drivers are taking on one of the giants of the gig economy. After a short break for Christmas, they were back on the picket lines earlier this week to resume their fight.

On the 6 December 2021, Stuart Delivery – who are contracted to provide Just Eat’s couriers – made changes to Sheffield drivers’ pay structure. Union reps say this restructuring has cut the base rate of pay by £1.10 per delivery from £4.50 to £3.40, slashing pay by 24 per cent, with some couriers reporting a weekly pay decrease of between £100 to £150. This was despite Stuart making £40 million in revenue in 2020 (doubling their 2019 take) and the company’s CEO getting a staggering 1000 per cent pay rise over the same period, according to the Independent Workers of Great Britain union (IWGB).

Stuart changed the pay for its employees in the rest of the country back in October and November, but had delayed alterations in Sheffield after opposition from drivers there. Khalil Lange, a father-of-three and a delivery driver in Sheffield, says: “Where normally I would make between £80 to £120 a day, I’m now making £50 or £60 […] I haven’t paid any of my bills and it’s hard times right now, but we know we have to go through hard times to win.”

Couriers in Sheffield had another victory last year after they forced Just Eat to scrap plans to fire and rehire drivers. The proposal, already in place in some cities, would have seen drivers rehired through another company that requires couriers to change to electric bikes. With one-third of the city sitting in the Peak District, delivering on bike simply wouldn’t be possible for most workers in Sheffield.

On Monday we occupied @JustEatUK's HQ.

❗Couriers across the UK face a 24% pay cut
❗They're fighting back with the longest gig economy strike in history
❗Watch the video and donate to the strike fund!👇https://t.co/AanYr5D4BWpic.twitter.com/JTnCPtgssz

Lifted by these wins and the growing membership in the local union branch, workers decided they were not going to take this pay cut lying down. On the day of the pay changes, the union voted to go on indefinite strike, demanding a £6 base rate for deliveries and paid waiting times between deliveries.

After three weeks of strike action last month, pickets outside McDonald’s restaurants every night forced six out of seven branches in Sheffield to turn off their tablets. This meant customers could not place orders from McDonalds on the Just Eat app and in some cases, the entire restaurant closed early.

Daily pickets outside restaurants across the city have persuaded drivers brought onboard to break the strike to join the union and refuse to cross the picket line instead. Food has been piling up on counters going cold and organisers estimate McDonalds have lost between £225,000 to as much as £1 million of revenue.

Alex Marshall, President of the IWGB, sees the strike as part of a pushback by essential workers who know a weekly clap doesn’t pay the bills. “It’s key workers who have literally put their lives on the line during the pandemic,” says Marshall. “The risks they were taking have been normalised now […] but it’s still so fresh in these workers’ minds the sacrifices they were making.”

From transporting vaccines and tests for the NHS to being a lifeline for many vulnerable people shielding, during lockdown, couriers were vital. And it’s the companies who’ve been rewarded for the sacrifices of these workers. In 2021 alone, Deliveroo turned a profit for the first time and Just Eat’s global orders grew by 33 per cent to 1.1 billion with the fastest growth in the UK and Ireland.

Remember @stuart_delivery saying they were talking to workers?

Earlier they held a SECRET meeting for chosen workers, with no union members invited.

We found out, came down and asked to join the talk. And what did Stuart do?

Cancelled the meeting and ran down the fire escape. pic.twitter.com/pGtU3A1ekU

Now workers are saying that enough is enough. “We’re seeing these unorganised workers, alleged ‘unskilled workers’, getting organised and saying ‘we need to be unionised’,” Marshall continues. “Instead of walking away from their jobs, which they might have done before the pandemic, people are actually willing to stand and fight because we want to keep doing this job.”

Last week Stuart, who are insisting the changes have not reduced pay, held a focus group at a local hotel with hand-picked couriers, excluding union members. A protest formed outside the hotel demanding that Stuart let drivers choose their own representatives, forcing the Stuart executive to escape out the fire exit. It made clear that, as Marshall points out, “If they actually had any good faith, they’d sit down with the union and try to come to a solution.”

Alongside older socialists and trade union activists on the picket lines every night have been members of Sheffield Solidarity Group – a student activist group with societies at both Sheffield universities. They grew out of the university rent strikes last year and have already supported several strikes and the Girls Night In boycott last October. The students’ presence has been visible throughout the strike, from producing the banners held up in photos on social media to spending evenings outside the takeaways of Sheffield leafleting couriers about the union.

The drivers have not let their contributions go unnoticed. Lange spoke about how valuable the outside support Sheffield Solidarity Group have brought to the pickets is: “It’s thanks to those guys we shut down the Meadowhall McDonalds,” he says. “We didn’t have a driver down there; we had students and volunteers who were there [running the picket line] and eventually, the manager was so annoyed because the police couldn’t shift those ‘pesky students’, meaning that a 24-hour McDonalds was closed at 7pm.”

📞Customer: Hi, I ordered a @McDonaldsUK about an hour ago. Where’s my food?

McDonald’s worker: Yea sorry about that. Orders are stacking up because drivers are on strike because greedy @JustEatUK subcontractor @Stuart_Delivery have decided to slash these guys pay. Horrible! pic.twitter.com/1s4GtO24h5

On 20 December, students from across the country staged a protest at Just Eat’s London office holding up banners that read “Just Eat Stuart, Pay rise not pay cut!”, before being forced to leave by police officers. “It isn’t just students supporting in their capacity as students,” says T, from national student activist group Red Square Movement, who took part in the London action. “Lots of us are also working as couriers and in precarious jobs, as well.”

T continues: “Students often are in a position to take action that striking workers can’t. We can take direct action to put pressure on institutions and show solidarity. It’s about using that privilege we have to help support struggles.”

If they win, this will be bigger than the drivers in Sheffield. It has the potential to break the back of one of the biggest names in the gig economy – a sector famously difficult for organising workers. Escalation is happening by spreading the strike to other cities instead of intensifying action in Sheffield. Trying to deliver a knockout punch against multinational corporations can be hard, but by targeting the busiest clients at the busiest time, the union has created an action that precarious workers can take part in while respecting the strike and being able to keep on earning.

This replicable model has meant the strike has now spread across the north. Drivers in Blackpool, Sunderland and Chesterfield are deciding to join the Steel City as the strike gathers pace, with more from across the country expected to join soon.

Parirs Dixon, striking courier and Chair of the Sheffield IWGB couriers branch, was clear about how essential it is the strike keeps adding new locations if they want to win. “If you have pressure from other cities, Stuart will start to feel it and we will get a quicker result,” he says. “Look at Blackpool, they started similarly to Sheffield and have really strong unity there between the drivers.”

Calling on other drivers, Dixon adds: “If you do not like the pay from Stuart, do not be afraid to come together and strike. You don’t want to be one of the cities that won’t get any changes when we win.”

If you want to organise couriers where you are contact laurawormington@iwgb.co.uk or if you wish to help in other ways you can donate to the strike fund or follow the strike on Twitter.

Linkedin
RELATED ARTICLES
OTHER ARTICLES
As the pandemic forces droves more people into hardship, landlords and letting agents are capitalising on our worsening housing emergency.
The street-skating pioneer talks life, legacy and why, after all these years, he still views his monumental career as a case of ’right time, right place’.
Leading art critic Robert Storr reflects on the photographers – from Seydou Keïta, to Malick Sidibé, to Carrie Mae Weems – who helped to transform and redefine the medium.
The New York MC reflects on his experience with Trumpian US immigration policy, and how it impacted his career.
Riding from street to street on his trusty bike, Scottish photographer Sandy Carson documents his adopted home at a unique point in its history.
As the role of the nuclear family is increasingly called into question, people are finding new ways to exist outside heterosexist norms.