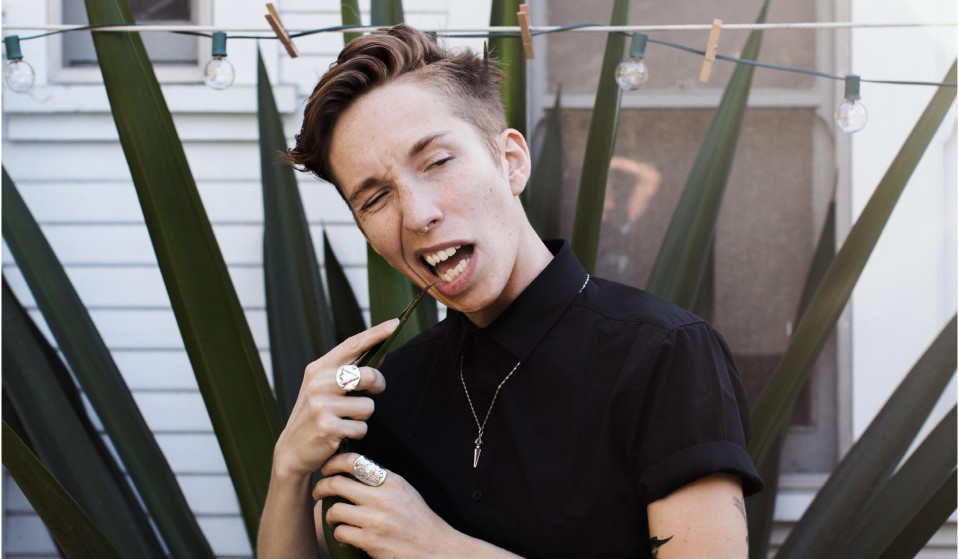 By revealing a secret about her start in life, artist and activist iO Tillet Wright is tearing up sexuality and gender stereotypes in the US and beyond.

By revealing a secret about her start in life, artist and activist iO Tillet Wright is tearing up sexuality and gender stereotypes in the US and beyond.

iO Tillet Wright (that’s pronounced ‘eye oh’ if you’re wondering, not ‘yo’ or ‘woah’, which she sometimes gets) is a born-and-bred New Yorker. She’s also an artist. A photographer. An activist. An anthropologist. iO is a thousand different things and not one of them defines her entirely. But as a kid she was not so sure.

You see, iO grew up as a boy. After being told she couldn’t play basketball one day in school she went home, shaved her head, and was kinda reborn. For eight years, iO “kept up the charade” – not telling her classmates or teachers, even turning her shoes around in the loo cubicle to look like she was peeing standing up.

“My understanding of my own gender is ever-evolving,” she says today from her new home in LA. “But back then, in the ’80s and ’90s, I lived in a really rough situation, just me and my mum alone in a really fucked-up neighbourhood downtown, so I think it had a lot to do with me trying to be ‘the man of the house’.”

In what iO calls “the bubble of New York” she was allowed to grow into her self-ascribed identity with little judgment and although she turned super girly at fourteen (after puberty hit) and kind of zig-zagged through different gender identities until she was comfortable with who she was – something she calls “a tomboyish girl who likes girls and boys depending on the person” – iO was never forced into one box or another. She was given the freedom to find out exactly who she was.

It wasn’t until Proposition 8 – a constitutional amendment passed in California in 2008 that revoked the right to same-sex marriage – that she realised other people weren’t really given this same freedom. “When Prop 8 happened I felt this very intense sense that people stealing rights from other people was wrong,” says iO. “I started to really think about what the disconnect was and how I could help.”

Being a photographer, iO started shooting the people in her bubble – friends, acquaintances and peers – who didn’t fit the narrow confines of what society deems as ‘straight’. “My story didn’t play into it at the beginning,” she says. “I was just a camera. And my goal was to just show people other people that they haven’t met before and be like, ‘Look at them! Can you really vote against them? We are you!’”

Organically, that rallying call turned into Self-Evident Truths – a photographic document of 10,000 people in the USA that identify as anything other than a hundred per cent straight. “I have now visited seventy-seven cities in thirty-nine states and I’ve shot 8,468 people,” says iO, not missing a beat. “I want to illustrate two things: one is the ludicrous nature of the law,

and how that needs to change; And two that we don’t all come in these neat little boxes of gay, straight or bisexual. There is a spectrum of human sexuality and now the project has become the first existing large document representing that idea. All of these people have been lumped into a group that are second- class citizens, but look at them! Look them in the face and see that they are also nurses and doctors and lawyers and cops and politicians and everyday people.”

There are some not so everyday people, too. iO has shot models like Daria Werbowy and Freja Beha Erichsen, musicians like Azealia Banks and designers like Prabal Gurung – even mega stars like Cara Delevingne and Johnny Depp have been spotted wearing ‘WE ARE YOU’ T-shirts. So has she been surprised by the overwhelming response? “My world has been spun upside down so many times in so many different ways,” says iO, with a sigh. “There are things I can’t believe people are willing to do to their children in the name of religion or their beliefs. On the flip side, there are unbelievable things that people are willing to endure because they love their children – switching churches, leaving cities, dumping partners. People’s capacity to learn and grow at every age has been utterly mind-blowing.”

When iO has shot all her 10,000 portraits she will exhibit the photos as an installation in a national mall in the US and then open the website up to submissions from people around the world. She’s also found herself giving talks to students around the US and plans to go to the UN soon to take her cause to the next level.

Right now she sounds tired and kind of full of energy at the same time – like she wishes there were two of her to get everything done. “My feeling is that the most dangerous force on this planet right now is the mechanism in the human brain by which we separate ourselves off from other people,” she says. “We go, ‘I’m white and you’re black, I’m gay and you’re straight, I’m a man and you’re a woman – and therefore it’s okay if shitty things happen to you because you’re the other.’ We do that all the time. If you think about it every war that’s going on at the moment is based on some form of that; religious, economic, tribal. And that is the most insidious force that exists within human nature. So that’s what I’m interested in. I’m working on that.”

Check out Self Evident Project.

Linkedin
RELATED ARTICLES
OTHER ARTICLES
Photojournalist Fiora Garenzi spoke with people still living in Eastern Ukraine, an area which seen some of the heaviest fighting since the war began.
Photographer Bud Glick recounts documenting everyday life in the area, and what it taught him about the Chinese immigrant experience.
With the virus now a global health emergency, we must take steps to fight misinformation and demand a swift UK-wide vaccine roll out, writes Phil Samba.
A sharp increase in officers armed with the electrical weapon is resulting in serious injuries and deaths.
With the Women’s Euros in full swing, last week saw glorious, sweaty celebrations take place in a dedicated, safe space for female and non-binary fans.
Photographer Anne-Marie Michel captures the women who through determination and strength are forging their own way in a male-dominated industry.