News & Politics / Activism / Despite the invasion, there are lessons to be learnt from Italy’s stop the Iraq war movement 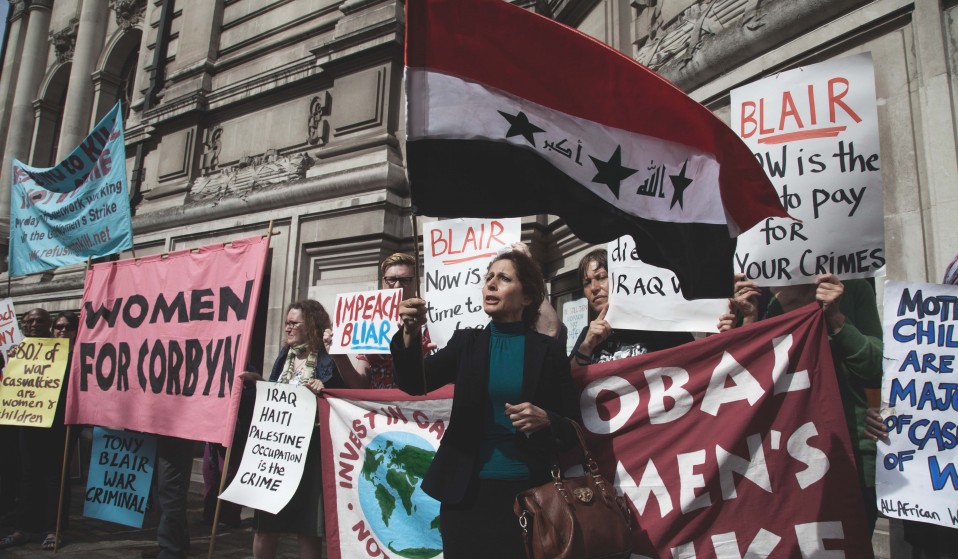 In 2003, millions of people around the world marched together to demand the invasion of Iraq be halted. Unlike in Britain, in Italy the anti-war movement was creative and radical, and important lessons can be learned.

In 2003, millions of people around the world marched together to demand the invasion of Iraq be halted. Sadly these movements were unsuccessful, and a bloody war ensued. As the Chilcot Enquiry is published, remember that in Italy the anti-war movement was creative and radical, and important lessons can be learned.

I was in my final year in high school in Rome back in 2003, and like most Muslim teenagers living in Europe at the time I was going through a massive post 9/11 identity crisis.

Unlike in many other countries I’ve lived in, in Italy politics is ever-present in schools and classrooms. But to be honest for a long time I wasn’t that interested. Sure, when there was a strike I’d refuse to cross the picket lines, but I was never involved in anything formal.

For me this all changed in 2001, when police shot Carlo Giuliani at an anti-G8 protest in Genova. I watched on, as my classmates, who’d once been active and vocal about causes that mattered to them,  suddenly felt scared to protest. That’s what made me angry, and got me active, I knew that if we cowered away from the streets then nothing could ever change.

From that point on I was ready. When the world started to talk of invading Iraq – and the dire consequences that would follow – we knew it was time to do something.

We had already marched against the war in Afghanistan in the lead up to February 2003 – we knew the power of protest.

By the time Blair and Bush got U.N. resolution 1441 – stating that invading Iraq was in breach of a ceasefire stipulated in a previous resolution – we already had established stop the war groups all over Italy. We had a national structure that co-ordinated our efforts, but to be honest I don’t remember the details, as I was only involved on a local level. The student group I was involved in was a varied bunch, I suppose we were the children of people who fought against the war in Vietnam, and students of the survivors of World War Two.

We were all aware of the first Gulf War and during the war in Kosovo we’d lived under the sounds of fighter jets. We didn’t want to live in a world where wars were still a thing. To be honest, it’s now 13 years later I still don’t quite understand how wars are still a thing.

Our local group, based in Ostia – a small suburb bordering Rome’s Leonardo Da Vinci International Airport – was an eclectic mix of church-goers, trade unionists, autonomous, anarchist and communist activists and students from each of these groups and none.

We would meet weekly, sometimes several times a week after dinner, and our meetings would usually go on until 3am. There would be discussions of tactics and priorities, but by and large we were all on the same page, the war had to be stopped.

My cousin was born in Baghdad during the Gulf War and I remember as a 7-year-old waiting to hear from my uncle and aunt who were fleeing Kuwait by car. I remember the anxiety. Initially, I think I was worried about the war spreading. I wasn’t sure if my family would be able to survive a second Gulf War as it was being branded. The war in Afghanistan and Pakistan’s support of it already lead me to believe Pakistan would be fair game for Taliban attacks. People around me were worried for a variety of reasons, most were God-fearing Catholics who didn’t want a war in their name.

Others were tired of the U.S. being a world power that chose who to destroy and when. The mood in schools, churches, social centres, cities, and the countryside was quite similar: defiant. We were not going to allow our country to go into another war.

What makes this movement so special (it’s still talked about to this day) is that the whole world seemed to come together. There were coordinated actions and protests across the globe, it was a coming together of people who wouldn’t normally have reasons to interact. The birth of the internet was a catalyst, suddenly we were united across borders with a common cause.

On 15 February 2003, the world came together to say no. Millions of people in hundreds of cities in Italy and and beyond came out on one day to show their opposition. These marches tend to be all you’ll hear about. These demonstrations didn’t happen in isolation: we’d petitioned, protested, raised funds and leafleted hard. Our group had even tried to occupy the runway at Fiumicino Airport to stop American military planes flying and to highlight how the American military operated through civilian airports.

The momentum had been building and by February, we were sure our efforts would pay off. There were demonstrations planned in over 600 cities around the world. All the newspapers in Italy had detailed coverage of the March plans with most of the national demonstrations being shown live on TV.

Every week, there would be protests or events that were aimed at raising awareness of the battle ahead. While Berlusconi initially flew to Washington to offer Bush his cooperation, he soon realised that public opinion in Italy meant this would be a risk to his premiership.

There was so much public support for the street movement that migrants felt comfortable joining protests. The biggest skeptics of street power – my dad and my best friend’s mum –  joined demonstrations.

At one protest, when the police were blocking a march to Parliament, I got my 11-year-old sister and three of the elderly ladies from my local church group in a van with a sound system to head back to our town. My mum and my best friend’s mum however refused to leave, saying when the young protesters would clear the police out of the way, they would march to Parliament before heading home.

I think today, more than ever, we should focus on the many lessons from the stop the war movement. We are being pushed into a polarised world where we might be forced to take sides. Bush tried that in 2001. He said: “You are either with us or against us,” and the people of the world responded in the millions saying another world is possible.

Movements need to take on civil disobedience as their core principle. Rallies and marches are easy to ignore, but disruptive and costly direct actions at arms factories and military bases are harder to. Building a mass movement of people on the streets – as we did in Italy – shows the will of the people, but alone it’s not enough to hold power to account.

Just look at what happened in Britain. Direct actions, social movements that can win need diversity and creativity. There were those in Britain who did this: Scottish railway workers who refused to transport military materials, activists in Brighton who broke into an arms factory whatever the risks.

This is what we must do to hold power to account – be radical, be bold and make ourselves impossible to ignore. There’s a place for marching from A to B, but history teaches us change won’t happen by just asking nicely.

Linkedin
RELATED ARTICLES
OTHER ARTICLES
Social prescribing connects people with non-medical support to improve their health and wellbeing – but some experts worry it’s just a stick plaster solution.
Activists and campaigners are fighting back against new laws that would seriously undermine the ability to take industrial action, calling it an attack on fundamental workers' rights.
After blocking the Scottish government’s gender recognition reform bill, Westminster is now devising further changes to the law to make it harder for trans people to self-identify.
Photographer Sean Maung reflects on documenting a small town in Pennsylvania afflicted by high levels of unemployment, poverty, violence, crime, and addiction.
A recent High Court ruling against the right to wild camp in Dartmoor National Park sparked the largest land protest in history – and campaigners say their fight is not over yet.
The action took place in response to the 200 asylum-seeking children who were placed in hotels run by the Home Office who have gone missing.