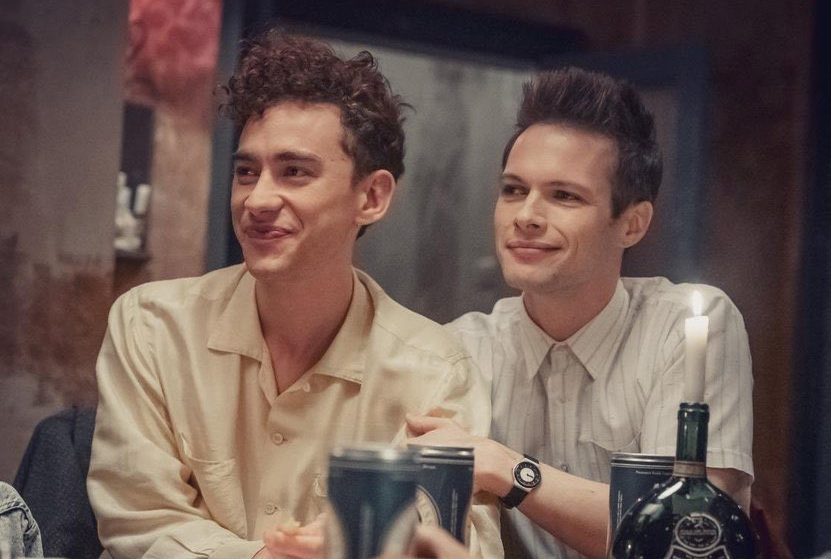 Photography © Still from It‘s a Sin

We sat down on our Instagram channel with actor and activist Nathaniel Hall, who contracted HIV at age 16, to discuss the Channel 4 drama and how, after years of keeping it secret, he came to live openly and boldly with the disease.

We sat down on our Instagram channel with actor and activist Nathaniel Hall, who contracted HIV at age 16, to discuss the Channel 4 drama and how, after years of keeping it secret, he came to live openly and boldly with the disease.

Thanks to Russell T Davies’ Channel 4 drama, It’s A Sin, HIV/AIDS – a subject often shrouded in secrecy and shame – has become a conversational topic among a mainstream audience, for many, for the first time. This new awareness has sparked an influx in HIV testing in the UK: during 2019’s HIV Testing Week, 8068 people checked their HIV status, and this year, that number was beaten in a single day.

To cope with the surge in testing since the show began, Public Health England ordered an extra 10,000 tests across Testing Week alone, marking a pivotal success in the UK’s goal of zero HIV transmissions by 2030. There are, however, still thousands of people in the UK living with HIV without knowing their status. The hope is that the discourse around It’s a Sin will continue and that these numbers dwindle.

Someone who has seen firsthand these huge shifts in understanding surrounding HIV/AIDS is Nathaniel Hall, who plays Donald Bassett, the boyfriend of Olly Alexander’s character Ritchie Tozer in It’s a Sin. Hall contracted HIV when he was just 16 from the first man he ever had sex with.

Growing up in the late ’80s and ’90s, Hall had heard of HIV/AIDS, but his understanding of the disease was relatively vague. At the time, sex education in school was virtually non-existent, and the UK was still living under Section 28 of the 1988 local government act, banning the “promotion” of homosexuality by councils and schools.

We sat down with actor and HIV/AIDs activist Nathaniel Hall on our Instagram channel to talk about his experience of living with HIV, and some – but by no means all – of the important things to know about the disease.

When Hall was first diagnosed with HIV, he remembers being told he had 37 to 40 years to live. “To hear that at 16 was intense, but things have changed now,” he says.

“If you get a positive diagnosis [now] you could be undetectable within weeks and then you can carry on with your life,” continues Hall. During the first few weeks after being infected with HIV, your viral load (the amount of virus in an infected person’s blood) is usually very high, and there is a considerable risk of passing on HIV at this point.

For as long as your viral load stays undetectable under effective medication, your chance of passing on HIV to a sexual partner is zero. “Medication, even just in my lifetime, has revolutionised. I’m on medication, my viral load is undetectable, that means I’m untransmittable, says Hall. “My boyfriend remains HIV negative, he takes PrEP as well, as an extra precaution, but that’s incredible. That gives me the confidence to live boldly and openly with my diagnosis”.

HIV treatment is one of the biggest successes in modern medicine, with the vast majority of people living with HIV now having a normal life expectancy. Usually, people who have just been diagnosed with HIV take between one and four pills a day. Different combinations of HIV medicines work for different people, so the medicine depends on the individual.

“If you go straight onto the point of medication, it’s so effective, the HIV hasn’t managed to do much damage – you can get on with your life and you’ll be wetting yourself with everyone else in old people’s homes like everyone else,” says Hall. Of course, there are still some risks, as Hall points out: “They’re still not sure what some medication does to your kidneys, or what it’s like to grow old with HIV – so it’s not something you want to go shopping for.”

Despite HIV being treatable, stigma and shame still prevail – as does the insidious narrative that the person who is infected with the disease should somehow be blamed for putting themselves at risk. When he was first diagnosed, Hall ended up telling only a handful of people, on a need-to-know basis, keeping his diagnosis a secret from his family and friends for 14 years.

“Universally, everyone I know that has HIV talks about the psychological impact of the diagnosis being the worst bit,” he says. “It can weigh really heavy alongside the stigma of the virus.”

“Lingering shame comes from the fact that HIV is transmitted through sex… and intravenous drug use,” continues Hall. “The ways in which it’s caught get projected onto the virus, when actually, it’s a virus – it’s like flu, a cold, or coronavirus. It’s just an intelligent low life, that’s just how it’s passed.”

While it is possible to live a relatively normal life with HIV, “the psychological impact of the diagnosis is massive,” Hall says. “If I woke up one day and my medication wasn’t there, I would get sick and die. So knowing you’re relying on something is a lot to process. And so can the stigma around the virus, navigating relationships and sex, and all that sutff – but it’s getting easier now.”

As Hall points out, HIV can actually be more easily treatable than diabetes, and yet the stigma surrounding HIV is far greater. “I hope we’re moving towards a world where we can say we have HIV as easily as we say we have diabetes,” says Hall.

If you use PrEP consistently and correctly, it is 92 per cent to 99 per cent effective in reducing your HIV risk, whether you use a condom or not. PrEP does not protect against STIs, like gonorrhoea, Chlamydia, or syphilis, and does not prevent pregnancy. (Condoms do protect against HIV, STIs, and pregnancy.)

“Condoms are still a super-effective way of stopping [infection], and good lubrication means the condom is going to stay on,” says Hall. Post-exposure prophylaxis (PEP) is a four-week course of medication that may block HIV infection after exposure to the virus. PEP might stop you from developing the virus if taken within 72-hours.

“There’s been a huge uptake in testing since It’s a Sin and organisations really pushing for that,” says Hall. “It’s very easy to say, ‘Everyone get tested’, but if the infrastructure is not there or tests are not available [it’s futile], as we’ve seen with coronavirus, like how a national testing programme is fraught with loads of issues.”

Low uptake in testing is often the product of stigma, which is why it’s so vital we continue to talk and educate ourselves around the topic of HIV/AIDS.  To find out more about HIV/AIDS and how to get tested, visit the Terrence Higgins Trust’s official website.

Linkedin
RELATED ARTICLES
OTHER ARTICLES
For over a decade, gamblers have won big by employing people to place live bets from the court. But does this dubious method still work?
The two-day long event returned to London this year, showcasing a spectacular parade, steel bands and Caribbean food.
Photographer David Corio’s archive offers a glimpse inside a revolutionary era of music and nightlife.
In his 2008 series, the photographer pictured himself as Angela Davis, Martin Luther King Jr., Malcolm X, and other prominent figures.
By turning a real-life crisis into daytime television fodder, TV bosses have once again shown themselves to be completely out of touch with audiences.
A 37-year-old woman shares how her abortion led her to become a clinic worker, and the abuse she’s received in that role.