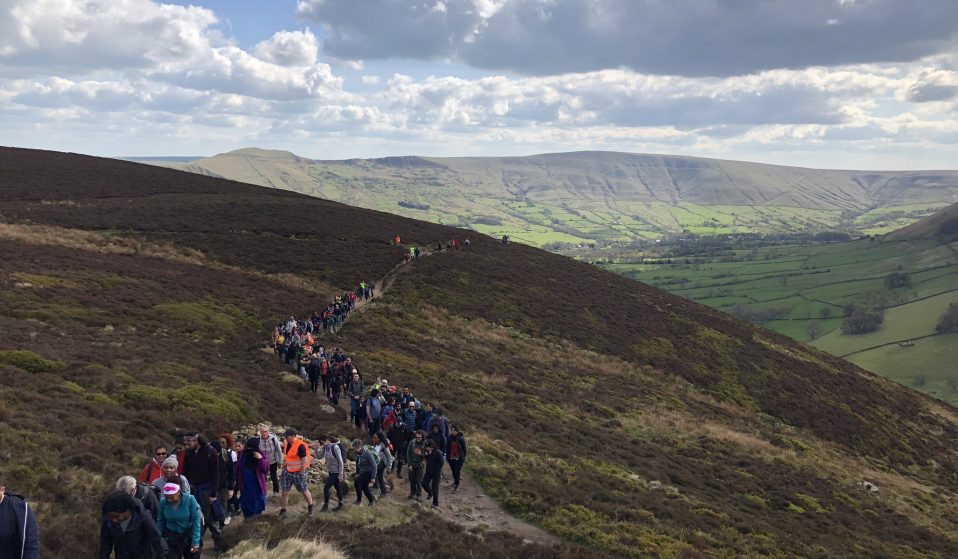 To mark the anniversary of the mass trespass of Kinder Scout, a group of hikers came together with the intent of creating a new, fully inclusive culture for rural spaces.

To mark the anniversary of the mass trespass of Kinder Scout, a group of hikers came together with the intent of creating a new, fully inclusive culture for rural spaces.

It’s a bright afternoon in late April and I’m standing in a field in the village of Edale in the middle of the Peak District. Around me, small groups are huddled against strong gusts of wind, drinking cups of tea and eating homemade flapjacks handed out by a catering team under a marquee. It is, in many ways, a quintessentially English scene.

But there’s a difference. Everyone here is waiting to begin a hike to nearby Kinder Scout — the highest point in the Peak District — under the banner ‘Kinder in Colour’, an event organised by campaigners and walking groups of colour. Coach-loads of hikers have made it here from across the country, with large contingents from Birmingham, London and Sheffield, the nearest biggest city, whose western edges merge into the peaks.

“I think there’s something really important about experiencing joy in the outdoors,” says Evie Muir, a journalist and campaigner against domestic abuse who also runs Peaks of Colour, a Sheffield-based hiking group run by and for people of colour. “It’s not only a statement of us being here – being representative of people of colour and saying we belong here – but also to reap the benefits of nature”.

Well that was a lush day out at the ‘Kinder In Colour’ celebration hike.

Mark Hutchinson is part of Walk4Health – a Sheffield-based hiking group which was founded in 2004 and initially called 100 Black Men Walk For Health. “Part of it is being a community of people, mixed and varied, each with their own experiences, each group with its own understanding of what it means to be Black and British,” he says. Walk4Health’s founder, Maxwell Ayamba, who is seated next to Mark, and who is one of the speakers at an event preceding the walk, explains why he’s here. “This event is quite important, not just because it is to commemorate the 90th anniversary of the Kinder Scout mass trespass, but the fact that it’s the first people of colour event commemorating [it]… That’s why we are here today: to ensure that the countryside becomes democratised and decolonised, and accessible to everyone, irrespective of the colour of their skin, or class.”

The Kinder Scout Trespass that Ayamba is referring to was a mass act of civil disobedience which took place in 1932, and had far-reaching consequences in highlighting the issue of ownership and access to land in Britain. The trespass was led by young people from northern English cities – mainly Manchester and Sheffield – who were members of the British Workers’ Sports Federation, an organisation formed by trade unionists and Labour party activists in 1923.

On that day in April, the group of ramblers, estimated to be several hundred strong, was met by a group of groundskeepers employed by the Duke of Devonshire, at the time one of the country’s largest landowners. Many of the ramblers were beaten up and five were later arrested, serving between two and months’ jail time between them. Several of those arrested – including Benny Rothman, one of the main organisers, who was the son of Romanian parents – were Jewish, or were deemed to look Jewish, pointing to the anti-semitic motivation behind the prosecutions. 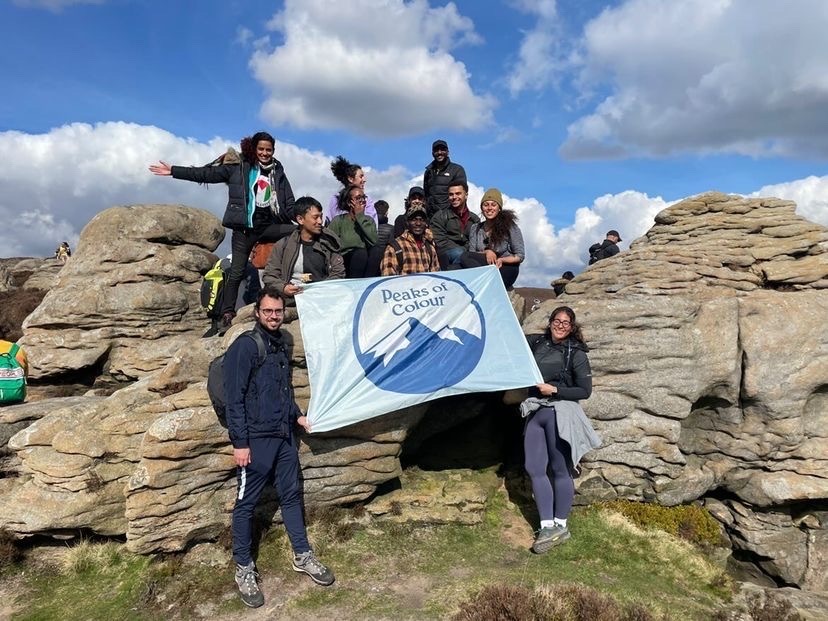 The wave of sympathy that followed the ramblers’ imprisonment provided the political context for the passing of the National Parks and Access to the Countryside Act of 1949, which led to the establishment of Britain’s first national parks. The event remains one of the cornerstone events of British radical history and yet, nearly a century on from the trespass, the distribution of land ownership in Britain remains deeply unequal, with a tiny handful of landowners – many from aristocratic families – owning almost two-thirds of the land. Meanwhile, access to the country’s green spaces remains marked by racial and class inequalities, with Black people and other people of colour making up a tiny proportion of visitors to the UK’s national parks.

“So much of radical British history is just forgotten or not really spoken about,” says Sam Siva, one of the event organisers and a remember of LION (Land In Our Names) – a land justice and campaigning organisation dedicated to reconnecting Black communities in Britain to land. Siva is also a campaigner with Right to Roam, an organisation calling for greater rights to wander in the countryside. “I connected to [the history of the Kinder Scout trespass] because I’ve always been drawn to trespassing as an act,” says Siva, “whether that’s squatting an abandoned building or just going into land.”

For Siva, who was born in Jamaica and grew up in London, the English countryside often felt like an unwelcoming place. “I have memories of going on family holidays to places like Cornwall or Norfolk and feeling quite a lot of hostility, feeling like I don’t belong here, people looking at us weird.” But while studying at the University of Sussex (which is set inside the South Downs National Park near Brighton) Siva began gravitating toward food growing projects and getting involved in racial justice organising, both of which led them to question the prevailing systems of land ownership in the UK. This, combined with the healing to be found through connection with the land, led to their work with LION: “For me, what really grounds me is land: being on the land with people. Being in a relationship with other-than-human beings. When you’re squatting a building or when you’re growing food together, you feel so empowered by the land”. 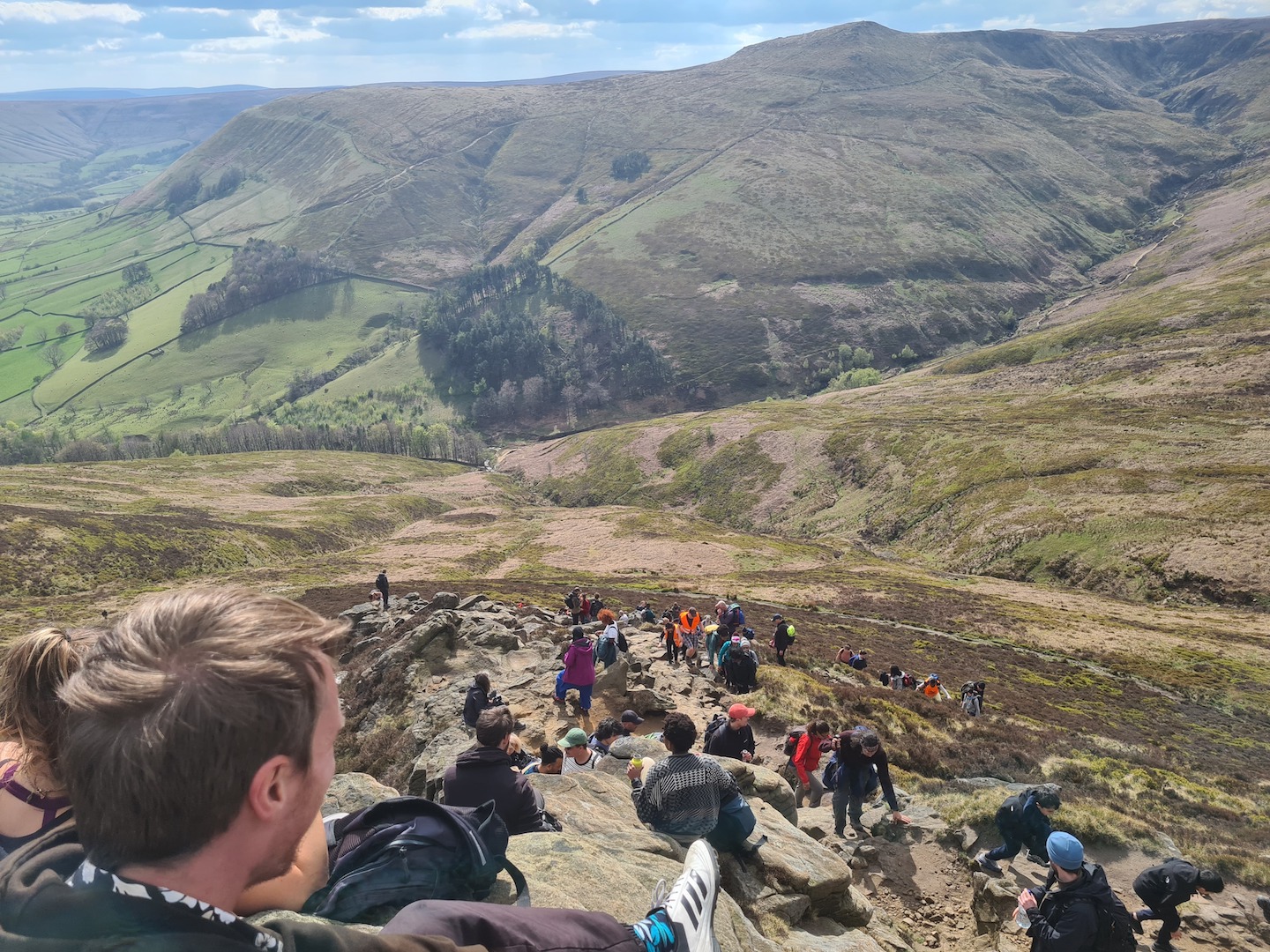 The uplifting aspects of spending time in nature are also what motivates Nadia Shaikh, the other main organiser of the Kinder in Colour event. As someone with over 15 years experience working in nature conservation – in both urban environments like Birmingham and more remote locations like the Scottish islands – Shaikh sees rewilding and rebuilding an emotional connection to the land as crucial to creating more inclusive outdoor environments.

“The longer we go with generations not meaningfully connecting to nature, the harder it is for us to understand and reconnect. So the solution for nature is rewilding humans, and giving back,” she says. What does that look like in practice? “I think it is access to green space, access to local food, and the space to be able to understand the natural world.”

the aim of the day’s hike was to challenge the exclusivity that often dominates hiking and outdoor culture. As Siva puts it: “I just want people to be able to have fun and feel safe in the countryside, and to feel like they can take up space in a way that is caring to the space that we’re in, but also is caring to ourselves”. It was largely a joyous and relaxed event, drawing people from a wide range of backgrounds and with very different stories to tell about their relationship to the countryside. 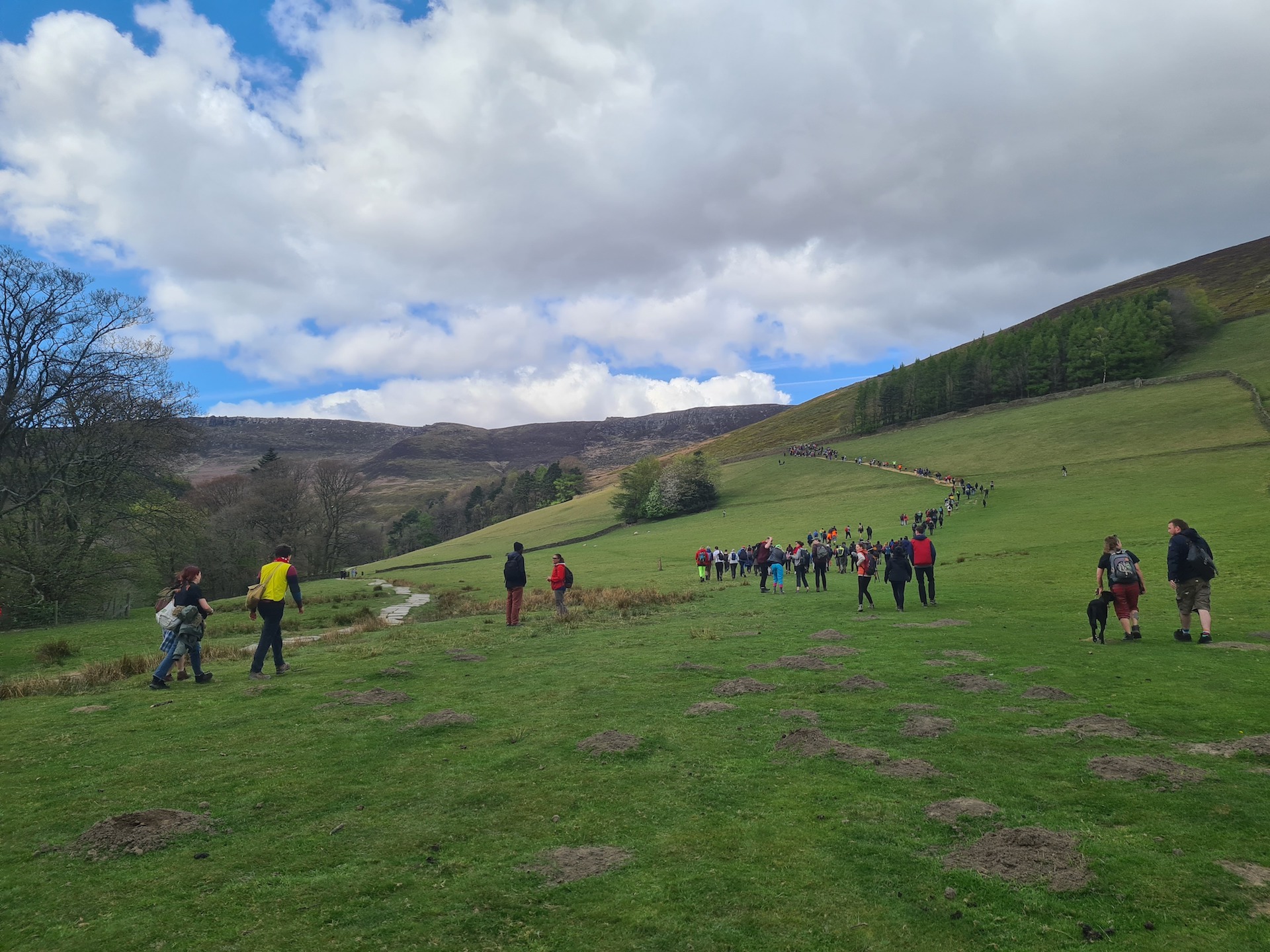 But the hike also comes at a time when restrictions on freedom of movement and assembly are being pushed by an increasingly authoritarian Tory government. Four days before the hike, a proposed government review into the right to roam in England, which had been proposed by Green Party MP Caroline Lucas, was quashed, meaning hikers and ramblers will still only have access to the eight per cent of England that is accessible for walking. Four days after the hike, on 28 April, the government’s deeply controversial Police and Sentencing Bill passed into UK law, meaning that trespass – formerly a civil offence – can now be punishable by imprisonment.

Given the well-documented benefits of spending time in nature and the continued restrictions on being able to access it, the actions of groups like LION and Kinder in Colour are more crucial than ever. “I want total land justice, I want total community ownership, that’s where I’d like to get to in the future. It starts with the right to roam,” says Shaikh. “Imagine if people genuinely all had equal access to green space, to be in it in that spiritual way, but also to contribute towards it in terms of food growth. Digging your hands into the earth. It looks like everybody being able to walk out their front door and having a genuine sense of wonder.”

Linkedin
OTHER ARTICLES
Finland-born photographer Sirkka-Liisa Konttinen looks back on her decades-long documentation of life in Northern England.
Thomas Hoepker‘s images taken during a road trip across America provide a searing social commentary about a divided country.
Proposals to introduce a minimum GCSE threshold for student loans will disproportionately affect those from marginalised backgrounds.
For decades, an area of East London has served as a community hub for Vietnamese people looking for a taste of home.
50 years since its inception, and the campaign calling for recognition that capitalism depends on domestic labour is as pertinent as ever.
A new edition of a seminal book brings together iconic images of the band onstage in their full glory and backstage in moments of unguarded camaraderie.