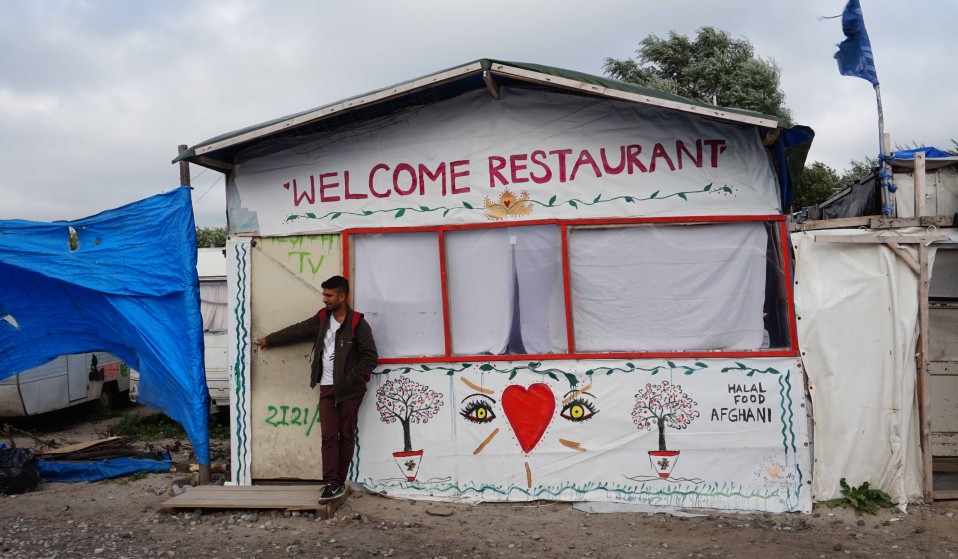 French authorities to rule on demolishing the Jungle’s self-built restaurants that provide food, support and shelter to refugees.

French authorities to rule on demolishing the Jungle’s self-built restaurants that provide food, support and shelter to refugees.

“Welcome to the Welcome Restaurant! Open 22 hours a day – two hours for sleeping!” says Hasham beaming, as he opens the door to usher me inside.

The Welcome Restaurant in the Calais ‘Jungle’ unofficial refugee camp is brightly decorated with flags, paint and patterned fabrics tacked to the ceiling. The restaurant is full of matching tables and chairs, with two squashy armchairs at the back, and behind the counter are cooking utensils and shelves full of plastic cutlery and paper cups. It provides a much-needed safe, communal space where refugees from all communities can sit and talk, eat and relax, and escape from the tensions of the camp outside. It’s been operating since February, and they’ve already served up thousands of nutritious meals to some of the most in need and vulnerable people in Europe.

But today the Welcome Restaurant stands empty, after being forcibly closed by police. On Friday 12 August 2016, a French court is expected to rule that all restaurants in the Jungle are to be demolished. If that goes ahead, it will be yet another round of Jungle demolitions, as French authorities pressure all residents to move into official camps, which are already at capacity.

Hasham, a refugee from Afghanistan, established the Welcome Cafe to serve food to the other refugees, and earn a little money to send back to his family. Restaurants like his, that refugees have built themselves or with the help of charities and volunteers, have provided an important lifeline to camp inhabitants. 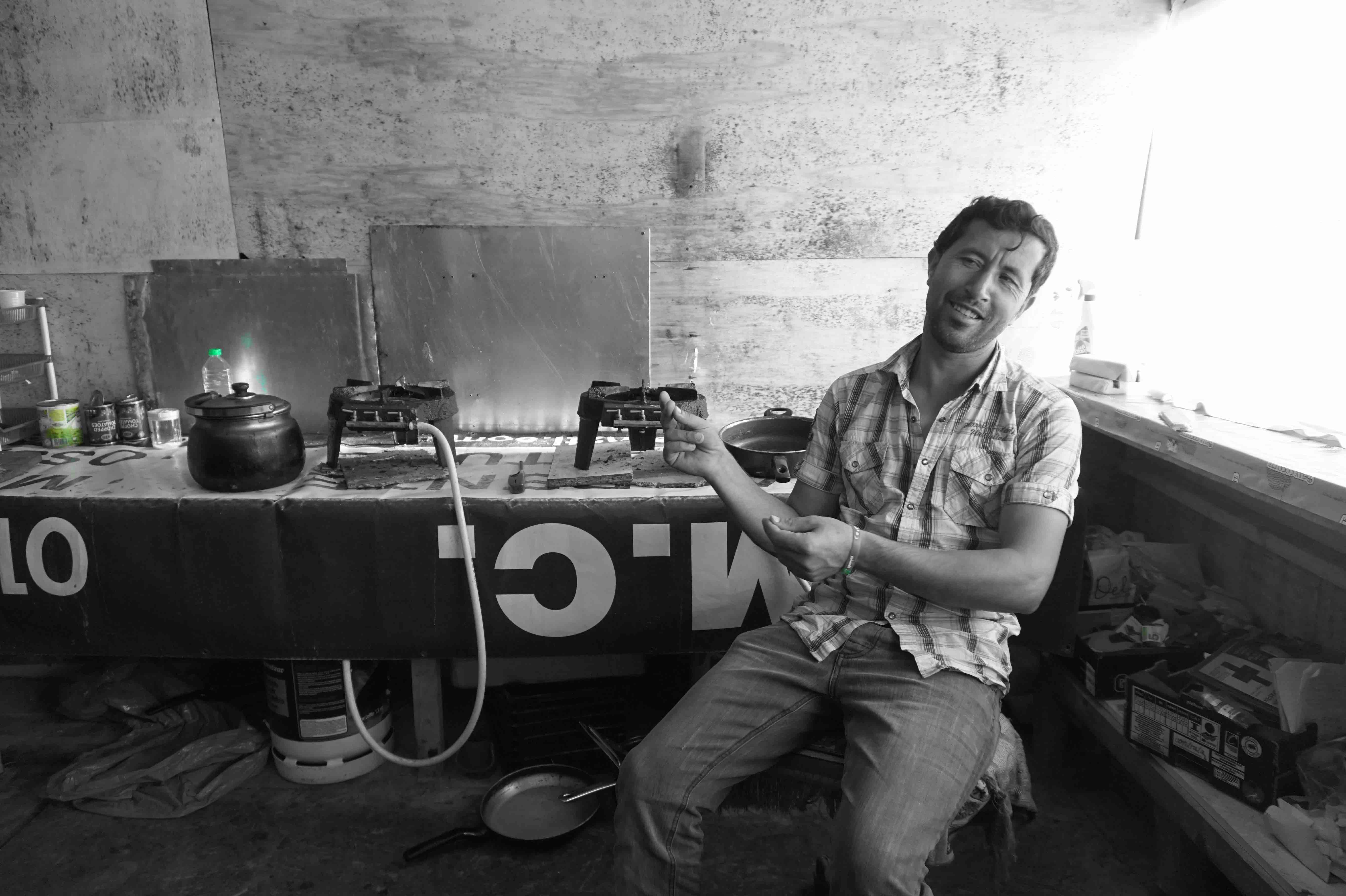 Relying on food distribution alone to feed the 7,500 people who live in the camp is not a sustainable, or even viable day to day. Queues are vast and those residing in the camp talk of how dehumanising it feels to be forced to wait hours for handouts simply to feed themselves.

The restaurants offer an opportunity for the slightest glimmer of normality in a bleakly uncertain world. Being able to trade, buy food and choose your meals is an empowering shred of hope in a place where life can all too often feel hopeless. 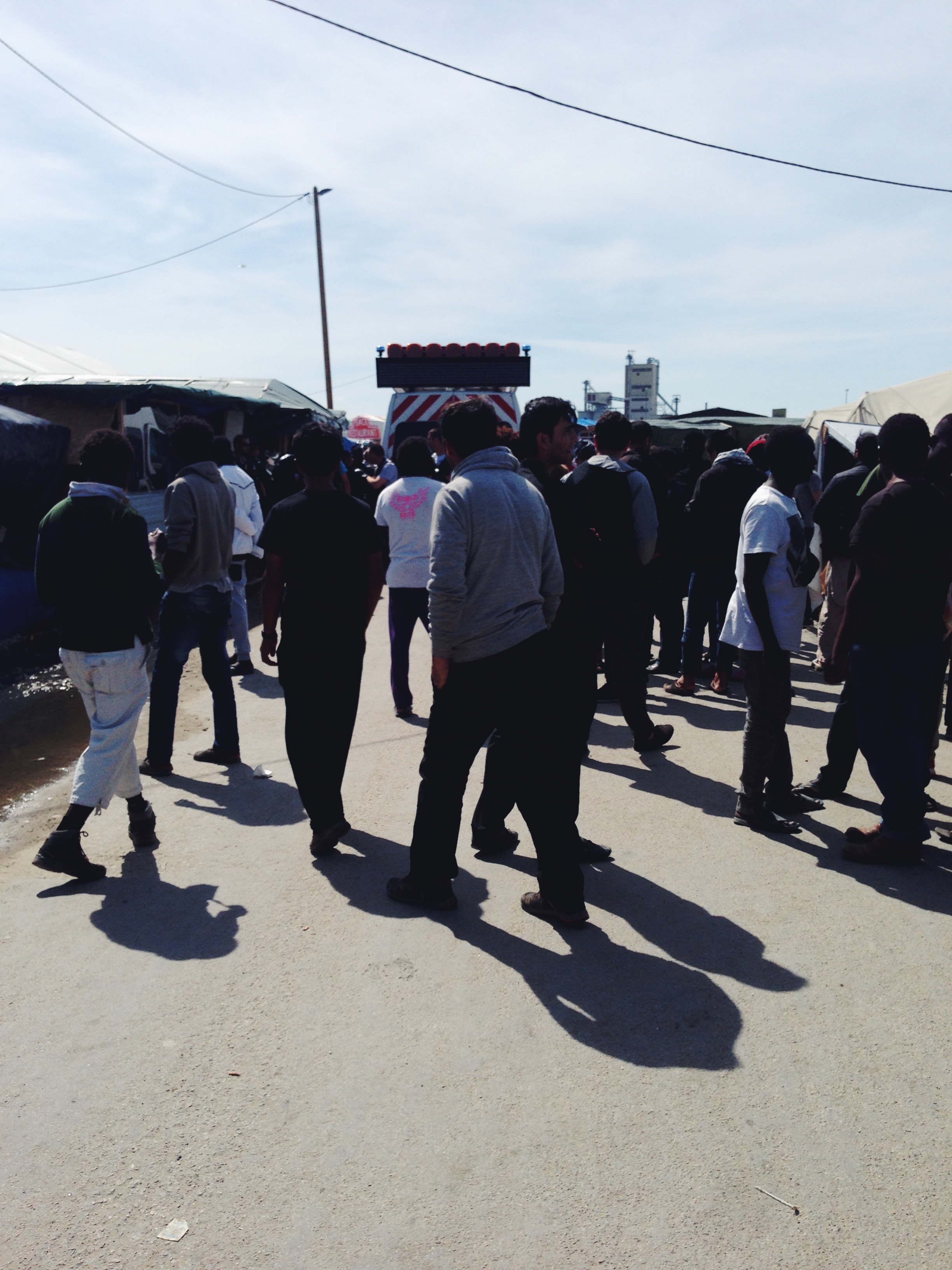 Police conduct a raid on the Jungle, Friday August 7. 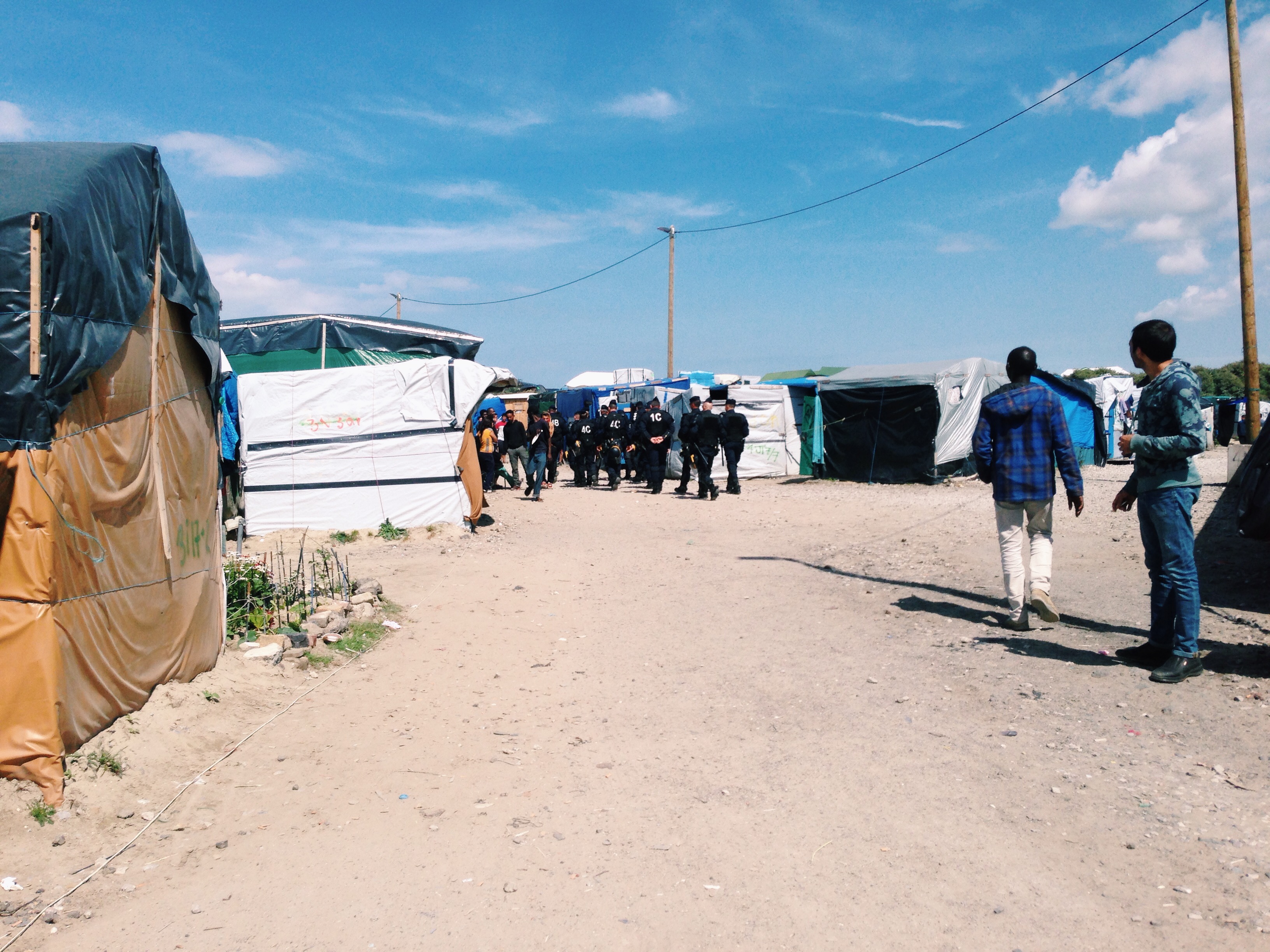 Hasham met another Afghan refugee, Mustafa, in the Jungle. Together they run the Welcome Cafe and have become known around the camp as restauranteurs, but also peacekeepers and protectors. When an Eritrean family lost their shelter in a fire, they came to the cafe and Hasham gave them blankets, food, and a place to sleep. It is a venture built on love, and an understanding of the fragility of humanity. 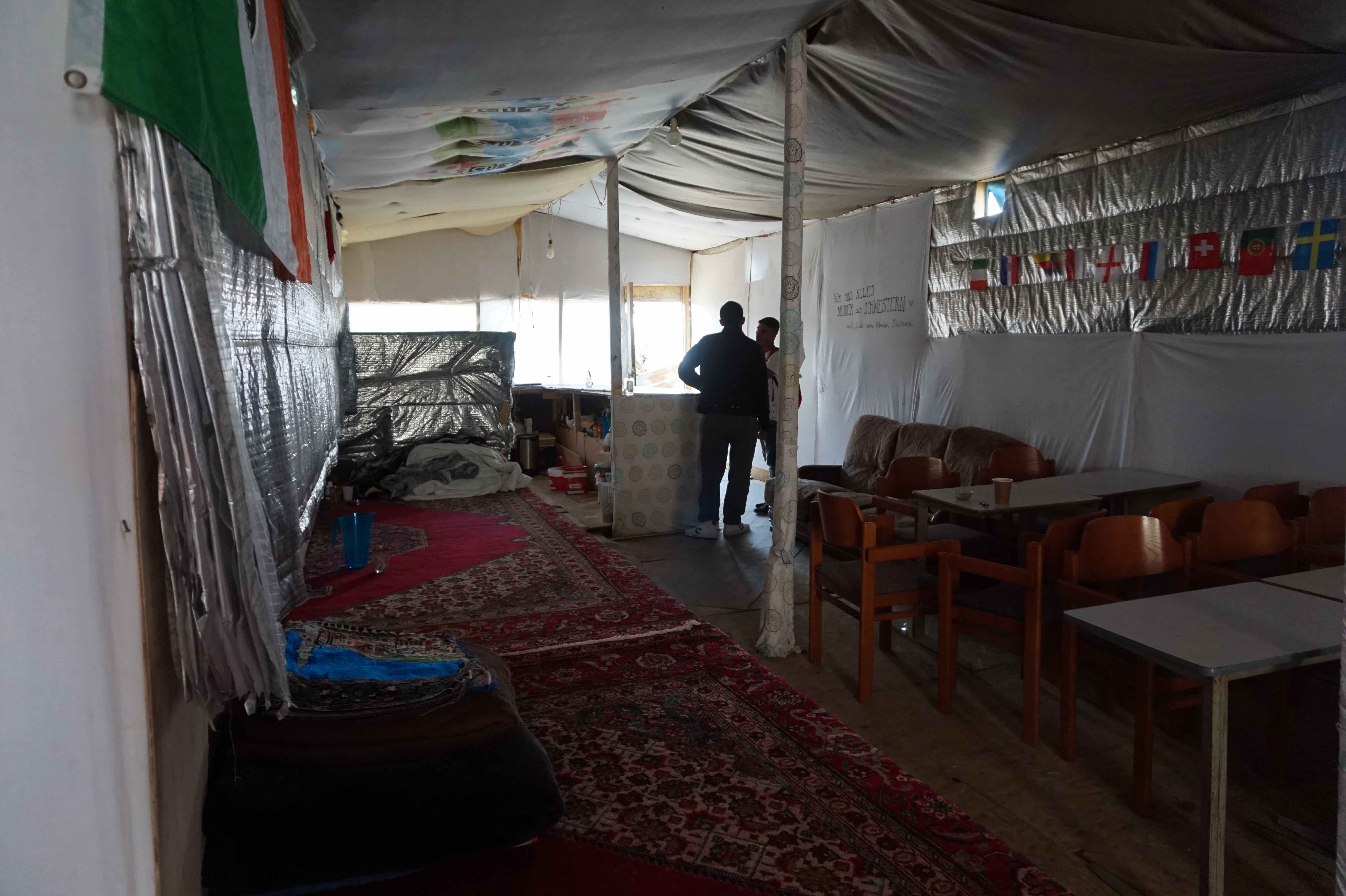 Inside the closed Welcome Cafe

Because of language barriers and cultural differences, it’s common for arguments to erupt in the food distribution queues between people of different nationalities which can sometimes spiral into fights. “If people are fighting outside, they can bring it here and cool down and stop fighting,” Hasham says. “There are lots of communities of people here: Eritreans, Ethiopians, Sudanese, Afghanis, Pakistanis, etc. For me, everyone is equal. I am kind with them all.”

It is true. As I sit in the restaurant, people of all different nationalities pop their heads around the door to greet us. Mustafa explains the importance of the restaurants in keeping the peace in the camp and providing a communal space where people can be comfortable and talk with each other freely. “Outside, there are a lot of tensions,” he says. “When the restaurants were open, there was a TV here, cold drinks…. People could come here and there were no problems.” 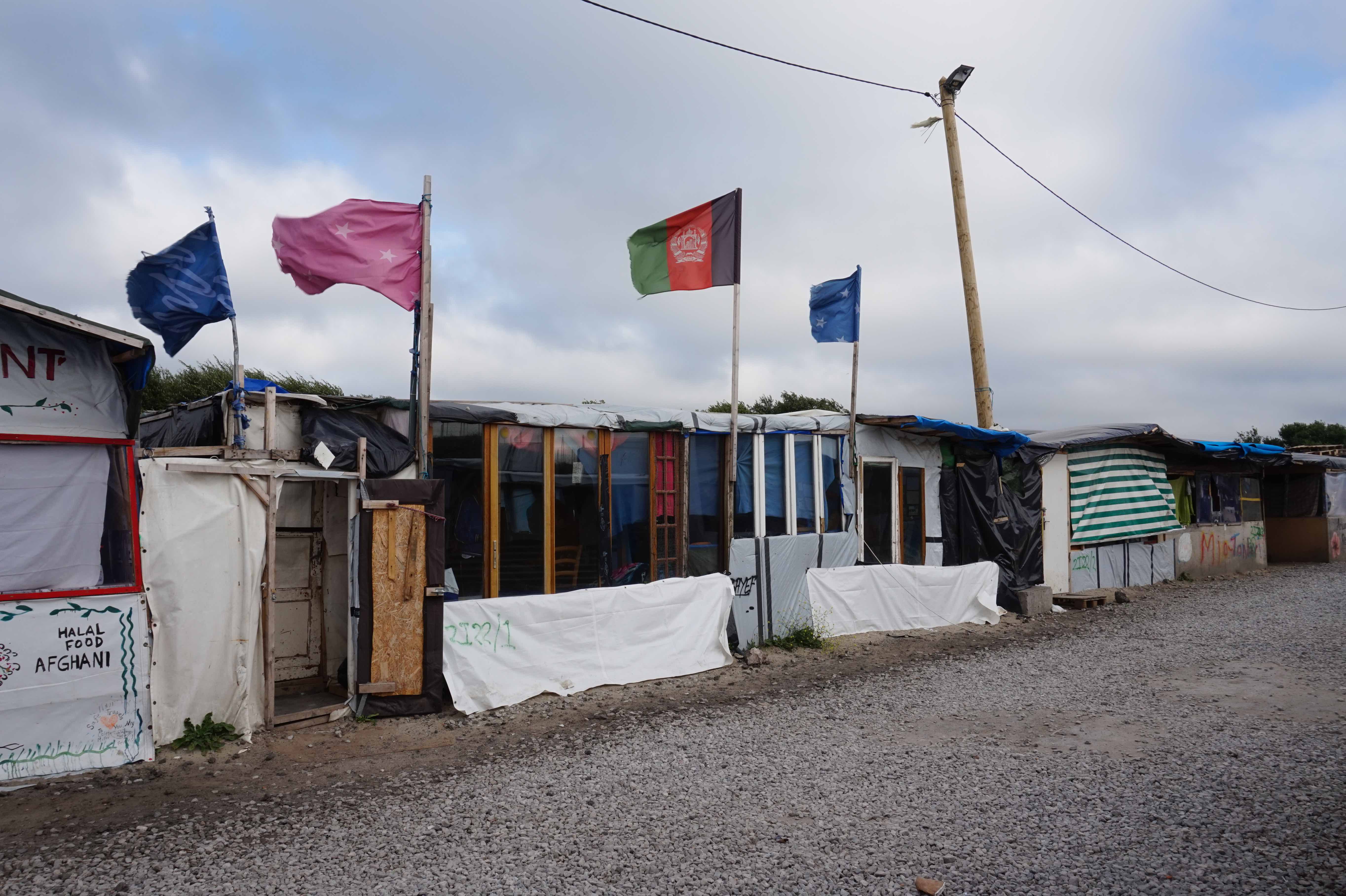 As the Jungle is not viewed as a legal camp, there is no electricity. The restaurants are often equipped with generators and provide well-lit spaces where people can charge their phones. For people living thousands of miles from home, with no certainty about when they will see their families again, the ability to charge phones, contact home and connect with those you have left behind means a great deal.

Another community space threatened by demolition is the Jungle Books Kids Restaurant, which has become a safe space for over 600 unaccompanied minors. It is a haven away from the dangers of a camp rife with razor wire and brutality. Attendees can play music and are provided with French and English lessons, free meals and shelter if they do not have a home. Demolition will force lone children outside into the muddy, unlit streets of the ‘Jungle’ with the adults. 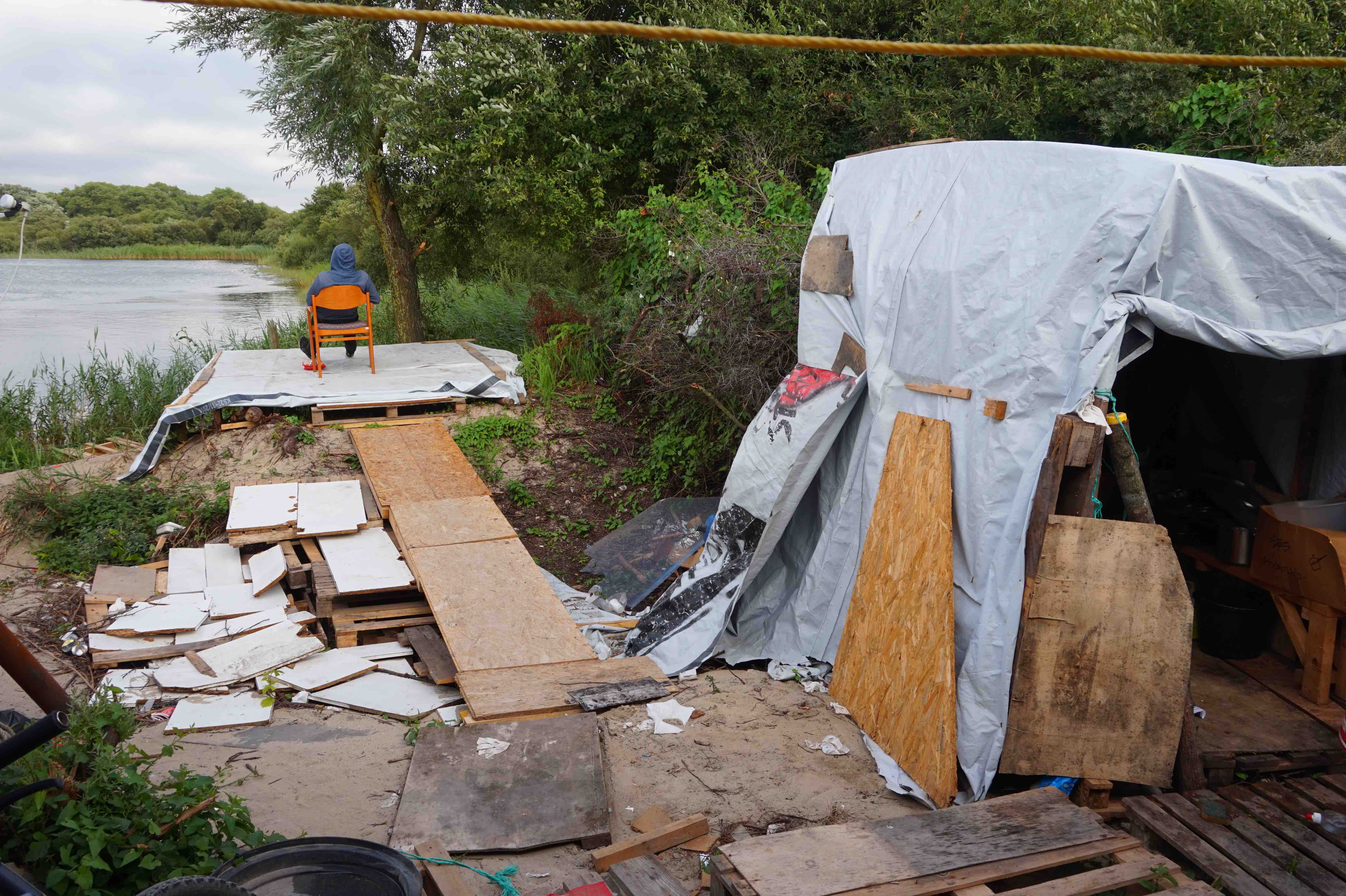 On Wednesday August 10, a French court sat to discuss the demolition of the restaurants and other community spaces in the Jungle. The French government argues that the food is unsanitary, the owners do not pay taxes, and they lack health and safety measures, such as fire extinguishers.

Despite a bi-lingual petition to save the restaurants and lawyer Norbert Clement putting up a strong defence on behalf of Kids Restaurant and Jungle residents, the court is expected to rule on Friday in favour of demolitions, which could begin as early as Monday morning.

The government will allow 48 hours for restaurant owners to dismantle their own businesses, they told community leaders and volunteers in a meeting last Friday. Once that window closes, police will send in bulldozers to raze them to the ground.

Yet, the government’s arguments for demolishing the camp don’t stand up to scrutiny. Refugee Info Bus and other humanitarian groups have made calls to save the ‘vital’ services. The government’s health and safety argument is particularly troublesome. As the government have refused to give the camp legal status there is no water, no streetlights and no provision of medical care. Demanding that those who run the restaurants obey health and safety legislation, provide fire extinguishers, fire exits and pay taxes, contradicts the illegal nature of the very existence of the camp.

If the demolitions commence, the Jungle will be ablaze and there will be no fire exits.

You can sign the petition to save the Kids Restaurant here and demand French authorities re-think their decision.

Linkedin
RELATED ARTICLES
OTHER ARTICLES
Campaigners reflect on what the supreme court’s decision to allow buffer zones in NI means for the future of reproductive rights in the UK.
Jeffrey Henson Scales intimate portraits and protest images of the BPP and its leaders offer a rare insight into organisation at a time of societal upheaval.
After building his reputation covering the US civil rights movement in the 1960s, the photographer went on to produce some of the most enduring images of the past century.
A new podcast is opening up the conversation between trans women and trans amorous men in the hope of building coalitions.
After a two-year hiatus and a new album, the Nigerian artist is riding high. Now, he wants to bring his alternative, genre-bending sound to the world.
The pro skateboarder withdrew from the 2020 Olympic Games so he could come out as trans. Now, he’s hoping to encourage others to live as their authentic selves – within the sport and beyond.