News & Politics / Activism / In Liverpool, football and activism are on the same team 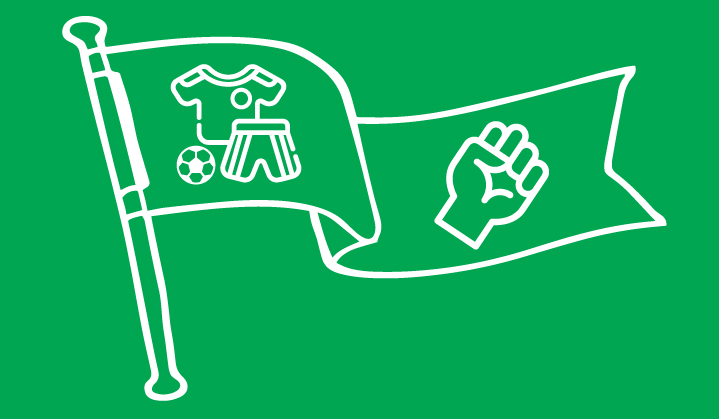 From grassroots programmes to top-tier initiatives, football has played a pivotal role in the city’s fightback against Tory rule.

From grassroots programmes to top-tier initiatives, football has played a pivotal role in the city’s fightback against Tory rule. Writer Davey Brett explores Liverpool’s unique relationship with the beautiful game.

It’s one of those bitterly cold Saturday league mornings in south Liverpool, all clear blue skies and sparkling dew. Ullet Road Church Rebels FC co-founder and club secretary Chris Allen is recounting the time he took some of his players to watch AFC Liverpool – a small, independent and devoutly socialist off-shoot of the team currently top of the Premier League.

“I was doing voluntary work at [Liverpool-based refugee charity] Asylum Link and because I was on the board at AFC Liverpool, I started taking lads – who were refugees – to the match,” says the 50-year-old, as players hailing from Eritrea, Iran, Syria and Sudan file out of the changing room behind him. “From going there with them and chatting, I found out what they wanted was not just to watch football, but to play it – and have their own team.”

Ullet Road Church Rebels FC was set up soon after. Run and funded by volunteers, the team’s players are all refugees. The club, Chris says, has proven to be a lifeline for them as they get to grips with life in a new country.

“They’ll come to the UK and there’ll be all sorts of problems – the hostile environment is hostile. It means you’ve got no money, you’re not allowed to work. Depending on who you talk to, some have been tortured, some have been imprisoned, some have been enslaved… there’s a lot of things going on in the mind of a young refugee. So the worst thing you can do is leave them sitting there in some grotty flat. The football has created a different scenario for them. We’re a family. If they need help, they know they can get it from us.”

The Rebels’ story is not an isolated case of football being used as a vehicle for solidarity and support in Liverpool. Examples are everywhere. In a city famed for the beautiful game, left-wing working class politics – from former Liverpool manager Bill Shankly’s socialist dream to the Hillsborough Justice Campaign and the subsequent Merseyside-wide Sun newspaper boycott – have been impossible to separate from football.

Now, in the face of cuts, austerity and the hostile environment, Scousers are at the forefront of using football to fill the gaps and mend the damage caused by ten years of Tory rule.

According to the Centre For Cities’ 2019 Outlook Report, on a per capita basis, Liverpool has seen the largest local government cuts in the country, with a £441 million reduction in spending, the equivalent of an 816 pound fall for every resident of the city. Meanwhile, according to the End Child Poverty Coalition, one child in three in Liverpool is living in poverty. Michelle Smith, 43, co-founder of local scheme Kit It Out, has seen the poverty first hand.

“There’s one community centre we went out to and there’s twin boys there, one played football one week and one played the other, because they only had one kit and set of boots. It’s been eye-opening.”

Kit It Out was set up in 2019 after Michelle’s partner heard of kids in the local area unable to play football due to having no boots or kit. He put out a call on social media asking for donations and the subsequent influx of spare boots and football kits was remarkable. Michelle hasn’t seen her living room floor since, with kit donations arriving daily from fans as far away as AS Roma in Italy.

“With it being Liverpool, there is a proud history of working class solidarity here. Liverpool as usual remained an island of red in a sea of blue on 12 December and we saw an upsurge of donations after the election result,” she says.

“I think people realised that we’re going to have to do this and support each other and make sure our kids are able to take part.”

Grassroots initiatives continue to spring up throughout the city, from teams giving homeless people access to sporting facilities (Liverpool Homeless FC) to campaigns encouraging fans to boycott The Sun newspaper (Total Eclipse Of The S*n), as well as vital community work from Liverpool FC and the award-winning Everton in the Community programme which for over thirty years has done invaluable work on Merseyside. In the hierarchies of professional football, Scousers have also made an impact.

To each their own.

Both have very few friends round here.

“We won’t stop till our work is done … “ pic.twitter.com/8A5OKiTjUt

In the Liverpool Walton constituency, the only parliamentary constituency home to two Premier League clubs (Labour got 84.7 per cent of the vote there in 2019), members of the Liverpool (Spirit of Shankly) and Everton (Blue Union) fan unions have been at the forefront of changing the perception of football fans and leading the fan activism revolution.

“We’re the polar opposite of what the mainstream media portrays football fans as,” says Dave Kelly, 62, Everton season ticket holder and co-founder of Fans Supporting Foodbanks, an organisation that collects food donations on matchdays. “We’re not Tommy Robinson’s army of little Englanders rampaging through towns in a drunken rage abusing people. We believe we’re the true reflection.”

Fans Supporting Foodbanks began on a Friday afternoon in November 2015 when Dave and fellow volunteers saw people queueing outside of a community centre. “We spoke to the chairman of the community association and he explained to us that it was the queue for the foodbank. At the time, like most people, we were totally oblivious to what a foodbank was.”

“He took us into the stockroom and showed us the foodbank had run out of food. The only thing left in the stockroom was probably the world’s biggest bag of pasta and six small tins of tuna. I’ve never seen a bag of pasta that big. And what they were doing, they were stripping it down to make sure everyone in the queue could have some.”

The following day, Everton were playing Manchester United at home. Dave and fellow volunteers collected food donations in a wheelie bin they borrowed off the council. They ended up collecting six bags worth of groceries. The initiative soon spread across the park to Anfield and three years later in December 2018 – as Universal Credit was being rolled out across Merseyside leaving thousands without a means of income or support over Christmas – they collected thirty tonnes of food in the space of a month to see families through the festive period.

Fans Supporting Foodbanks has since spread, with clubs up and down the country doing their bit. Their slogan is ‘Hunger Doesn’t Wear Club Colours’, a reference to bridging domestic rivalries for the greater good. The organisation has even avoided copyrighting their media assets and making them Liverpool-centric, so that people can support the cause under one collective banner.

“It could well be rugby fans, cricket fans, boxing fans – it could be fans of Oasis,” Dave says. For him, who you support is irrelevant. It’s about getting everyone on board together, to support each other and show solidarity.

Although there’s clear pride in what the city is doing and working class solidarity has become a part of the city’s identity, everyone knows, ultimately, they shouldn’t be doing this. “It sticks in my throat a bit to think we’re doing foodbanks, we’re doing mental health work, we’re doing Kit It Out and all those sorts of things,” says Joe Blott, 59, chairman of Liverpool’s Spirit of Shankly fan union and a former local government worker.

“They’re things that bloody government and local government should be providing. But the [Tory] government in the last ten years has taken every single last scrap, every penny… if we don’t fill that gap then it won’t get filled.”

“When the going gets tough we still stand behind the team,” he adds. “That’s the same philosophy Liverpool’s got. You don’t give up. Everton fans haven’t given up, they carry on and they know that always through the struggles they get stronger. We complain, of course we do, but we fight back. We support each other.”

Linkedin
RELATED ARTICLES
OTHER ARTICLES
As the Scottish government announces a rent freeze, an activist with Living Rent who fought and won shares how they did it, and what must come next.
The idea that a younger generation is abandoning work has become a popular narrative online, but it doesn’t necessarily reflect reality.
Cindy Campbell recounts how her brother ushered in a new era of musical culture at a party she held in the Bronx in ‘70s.
Birdy Chu reflects on documenting the historic moment in which the territory was formally passed back from the UK to China.
Sean Maung’s photos are a love letter to the Black and brown communities that make up New York.
Rogue landlords are exploiting young and inexperienced renters and leaving them in mental and financial turmoil, reports Niall Hignett.