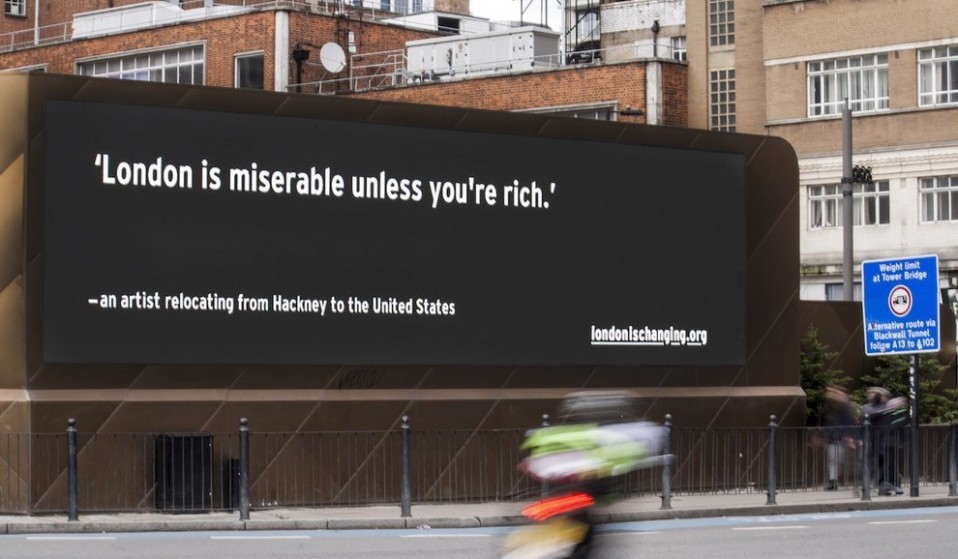 As rent prices in London continue to surge, people are packing up and moving on. What's the future of the city?

As rent prices in London continue to surge, people are packing up and moving on. What's the future of the city?

How would you feel if you were forced out of the city you’d made your home?

This is the case for thousands of young Londoners, priced out of London by landlords charging extortionate rents and high-rise blocks with ever-decreasing amounts of affordable housing.

How long can this go on? That’s a question posed by London is Changing, a project that aims to highlight the impact of economic and policy changes on the culture and diversity of London by creating huge billboards showing Londoners’ plights.

The idea of Dr Rebecca Ross, senior lecturer and MA Communication Design course leader at Central Saint Martins, the digital billboards, erected in Holborn and the City of London, display a rotation of messages taken from transient Londoners. The messages were collated from an online Q&A about why participants moved to London, why they’re leaving, or why they’re staying. Anyone who has moved in or out of London in the past or next 12 months is invited to take part.

Ross hopes the findings will “encourage discussion about the impact of economic and policy changes on the culture of diversity of London” and reveal more about migration in the city. Although the original billboards have come down, the project continues throughout this year, and Ross hopes to reveal the full set of responses in early 2016.

London isn’t the only city suffering a major housing crisis. Mountain View, CA, is also struggling. In the city where Google’s global HQ Googleplex is situated, residents of the city are facing increasing prices and less property, pricing out middle-wage workers. In 2013, 114,000 new jobs were created and yet fewer than 8,000 new housing units were built.

Even the city with the best housing policy in the US, New York, has similar issues. Over the last 20 years, the income needed to afford a typical New York City apartment has soared more than $10,000, whereas incomes themselves have only risen by around $1,000. The city is nine months into an ambitious plan to build or preserve 200,000 units of affordable housing over 10 years, but residents are still struggling to find homes.

Linkedin
RELATED ARTICLES
OTHER ARTICLES
London’s housing crisis is worsening by the day. Huck spoke to the residents of West Hendon council estate in North London, who have been battling developers since 2002.
When a group of single mums occupied an empty council estate near the Olympic Village, they made the UK housing crisis impossible to ignore. But what’s driving Londoners out of their homes?
As the housing crisis deepens, and tower blocks keep rising for the transnational rich, Michael Fordham ponders London's cultural loss.