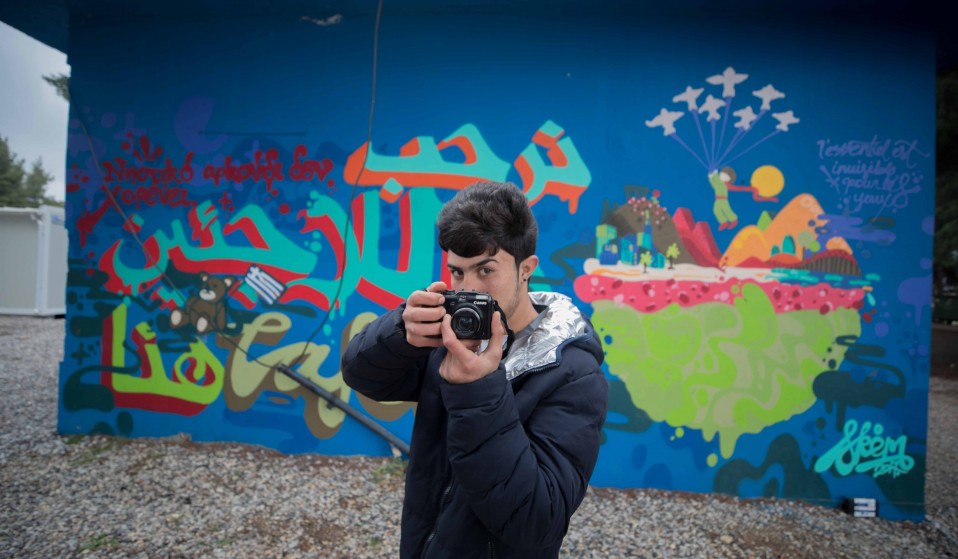 Forgotten in an isolated Greek camp, young refugees have produced the Ritsona Kingdom Journal to remind the world they exist.

Forgotten in an isolated Greek camp, young refugees have produced the Ritsona Kingdom Journal to remind the world they exist.

We’re standing on top of a crumbling concrete water tower, looking out over a cloud-covered valley in central Greece. Our guide is Borkin, a 16-year-old artist and photographer, who was forced to flee the violence in Syrian Kurdistan. He points out toward Ritsona camp – a small cluster of containers nestled among the trees below, 75km outside Athens, in the middle of nowhere. With a barbed-wire fence behind us, the limit of his world right now is not even as far as the eye can see.

After the EU shut its borders nearly two years ago, many camps were hastily constructed across Greece to house around 50,000 people who became stuck in the country, and then largely forgotten about. But young people from this camp have produced their own magazine, Ritsona Kingdom Journal, which features original writing, poetry, photography and artwork. It’s a bold statement of their diversity and creative talent – if only people would listen to what they have to say. 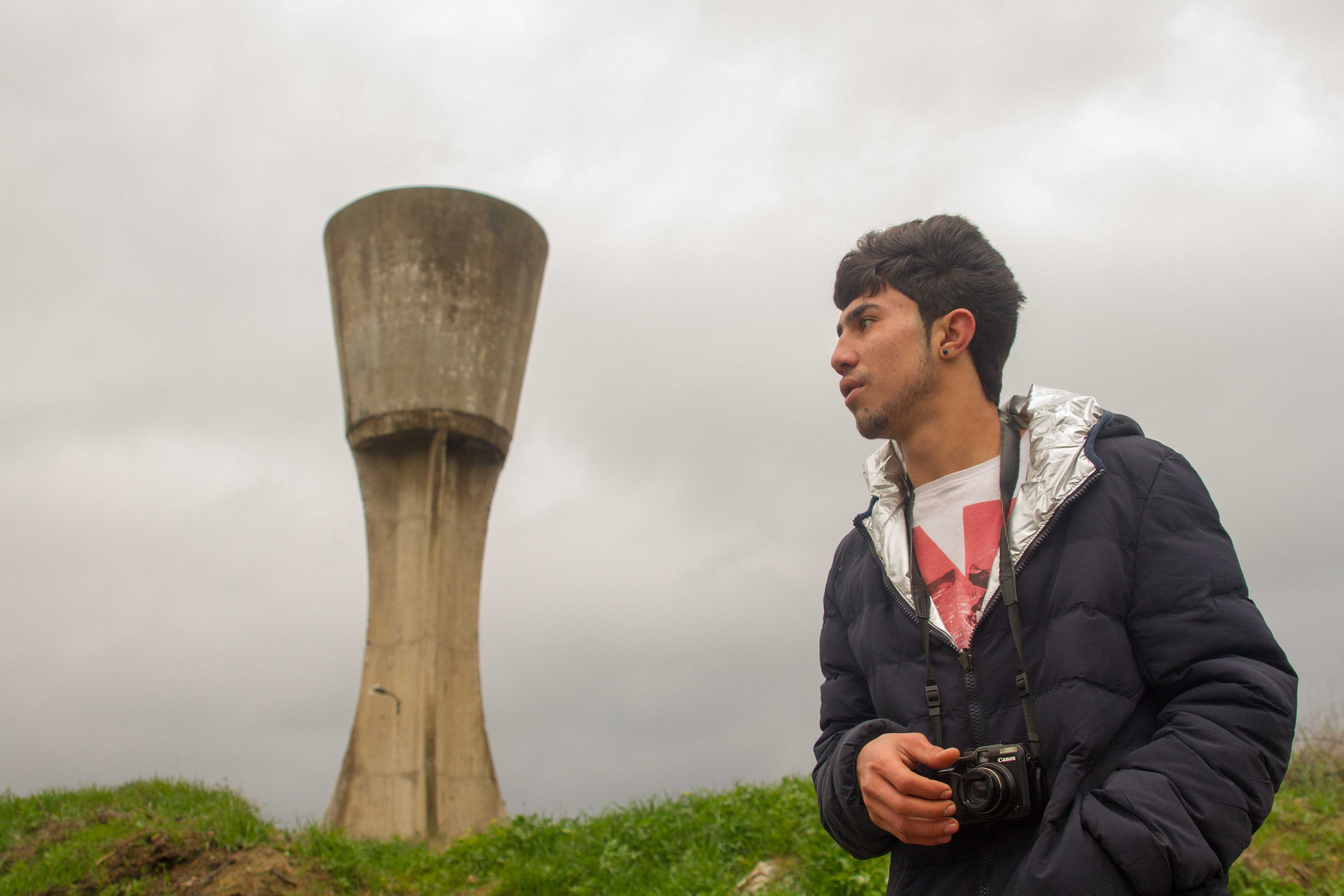 Borkin leads us enthusiastically on a tour of the camp with his camera slung jauntily around his neck, stopping now and again to snap details that catch his eye. “I’m taking pictures for the new issue of the magazine,” he says. “I want to capture everyday life in the camp and of all my friends. I want people outside to see how we live here.”

Borkin wants to become a doctor. But those plans are on hold, as the only education for over-16s are classes provided informally by NGOs. However, while many refugees wait for over a year for decisions on their asylum applications, Borkin is one of the relatively lucky ones. After passing through Iraq, Iran and Turkey, Borkin arrived in Ritsona four months ago and has another two months before he’s relocated to Germany with his family. 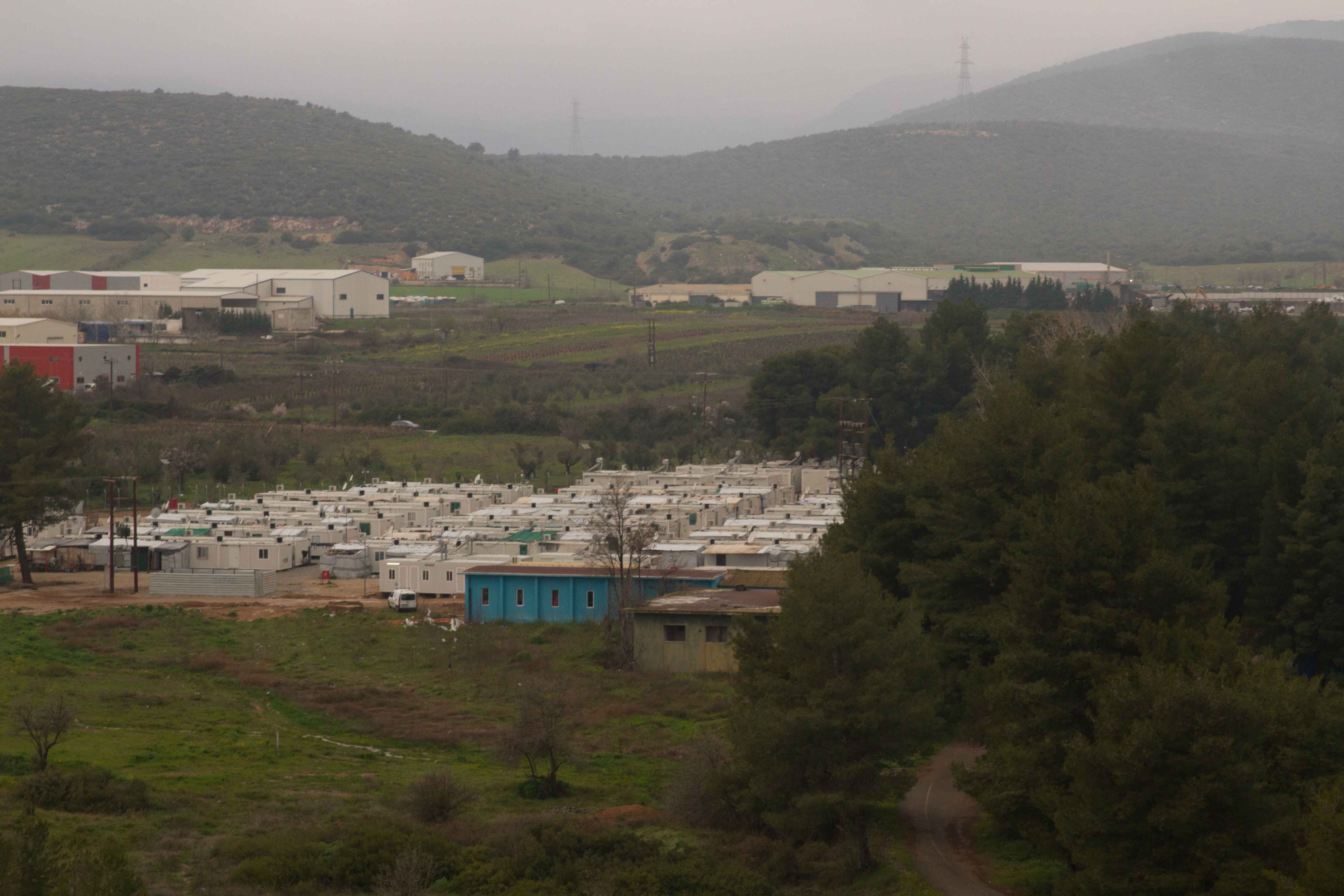 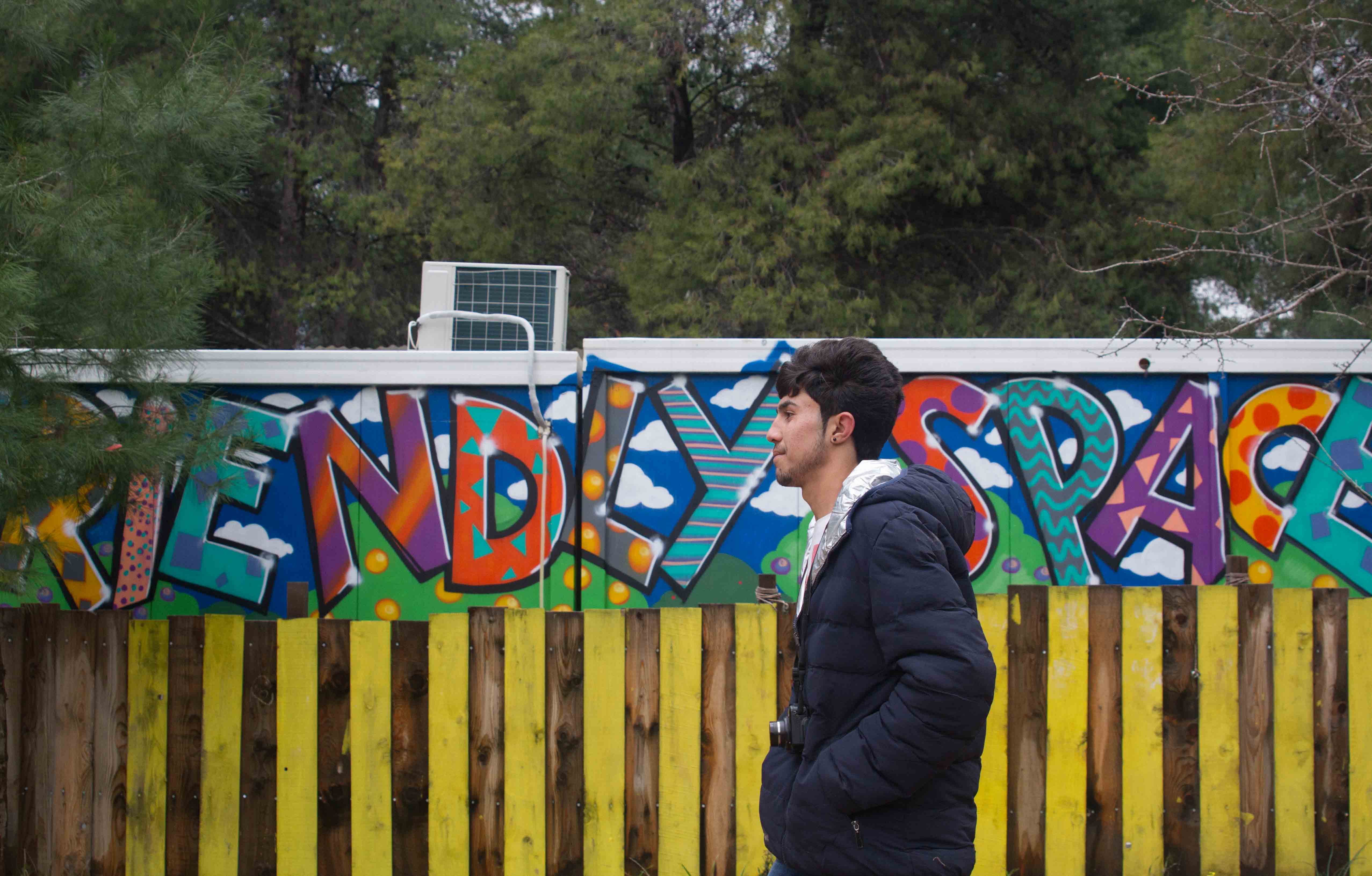 He learned painting from his father, a professional artist, and Borkin has contributed to some of the many impressive murals that brighten up the camp’s grey ISObox containers. But there’s no escape from the sickly-sweet chemical smell of thinly-disguised sewage, that lingers permanently over the camp.

After wobbling our way across a large puddle over a walkway of wooden pallets, Borkin delivers us to two containers that comprise Å Youth Engagement Space. The mud and grey skies aren’t enough to dim spirits and a rowdy launch party is getting underway for the fifth issue of Ritsona Kingdom Journal. 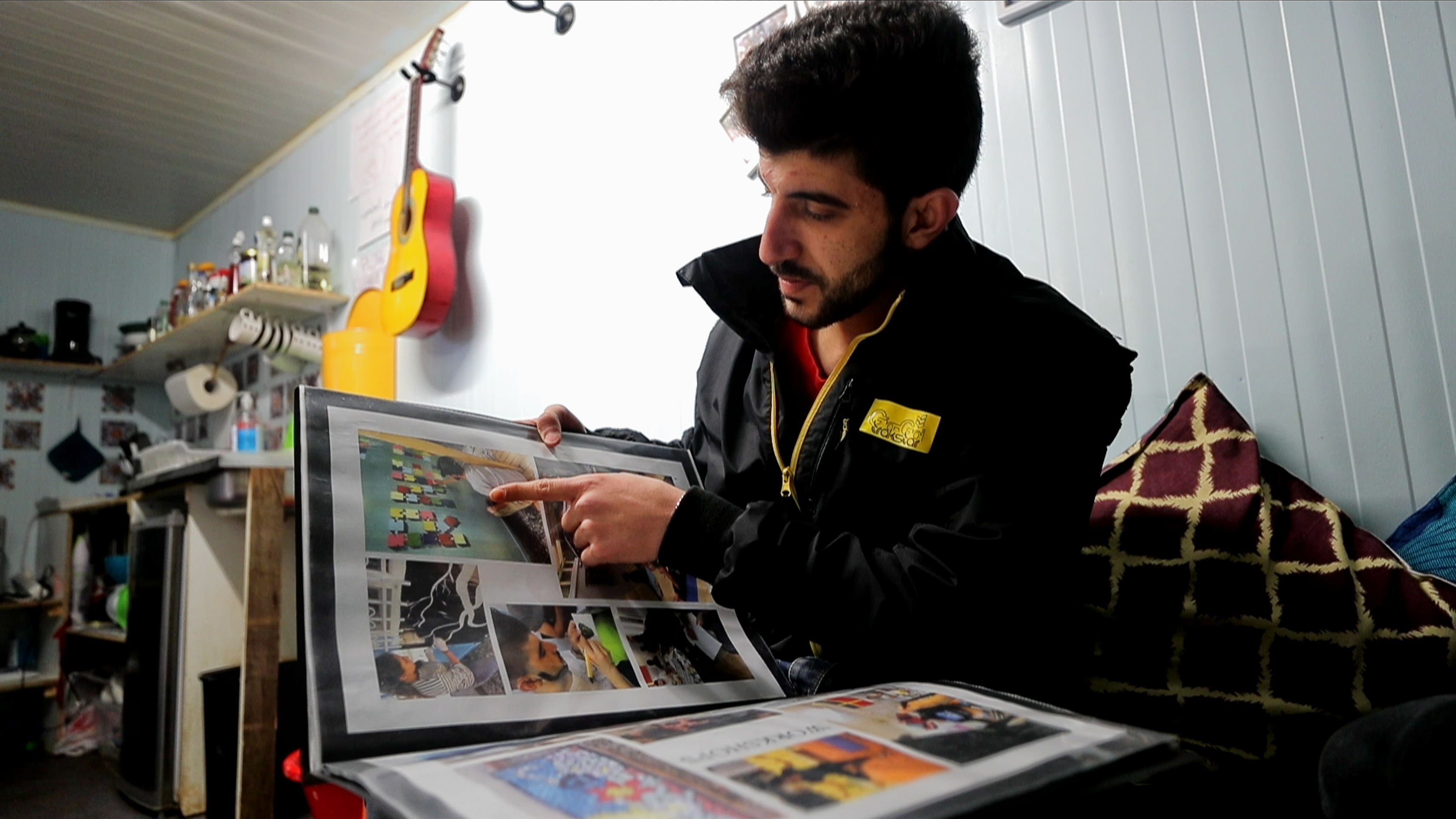 “We created the magazine because we wanted to tell people that we are here and that we are people with many talents,” says George, 21, from Syria. George writes poetry, plays guitar, designed the camp’s logo and helped put the first issue together. In their maiden issue, his friend Bassem Omar christened the camp ‘Ritsona Kingdom’ and anointed himself King, as a joke – because there’s nothing regal about this place.

“I don’t think I will ever be a professional artist, but I like to paint,” says Michael, 19, George’s younger brother. “You can’t do anything here. I am trying to leave this camp, to start a new life and study to be a civil engineer but I don’t know how long that will take. When you have nothing to do, painting helps. I take my paints out and I can explain things.” 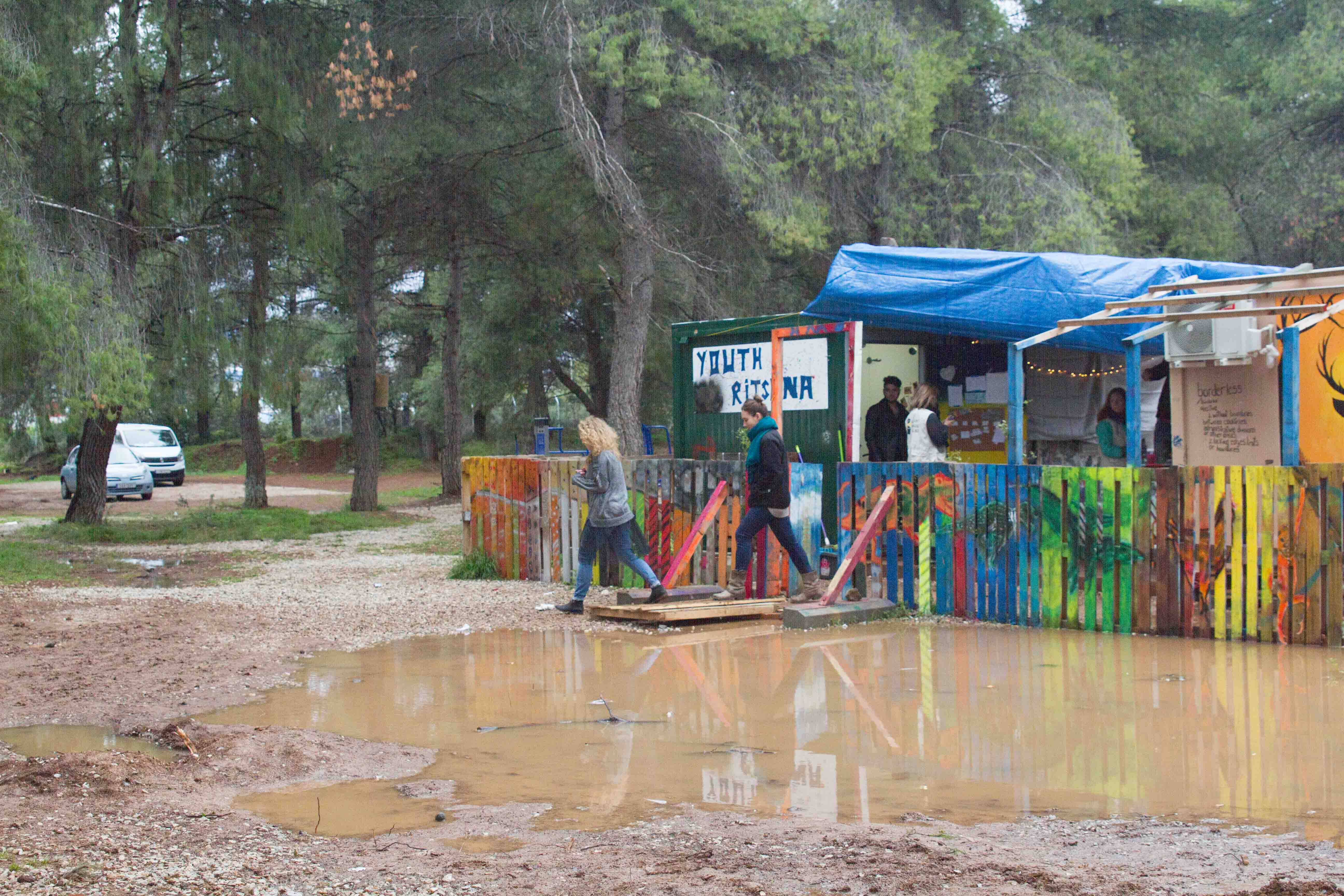 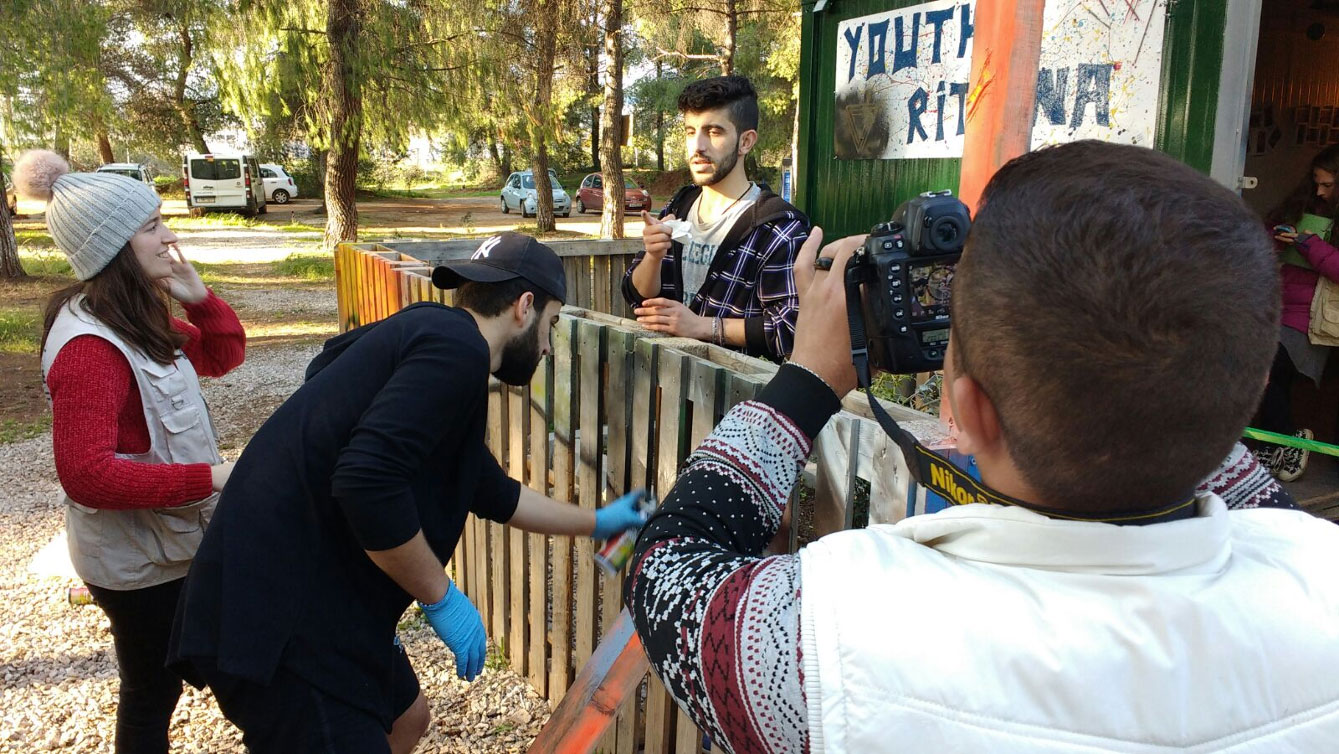 The festivities begin with stop-motion films made by the kids with Storytelling Without Borders. One of the most impressive is The Magic School in the Forest, a Harry Potter-inspired tale about a young princess who wants to learn magic. It was made by Borkin’s younger sister, Hadaya, 13, who spends each night writing stories in her container home and wants to be a doctor and pilot when she grows up. “Making films is fun,” she says. “I want people to be happy when they watch my film.”

There’s an infectious sense of fun and togetherness among the kids – particularly when they start blasting out the Middle Eastern party bangers. But underneath all the smiles, there’s a deep sense of frustration. 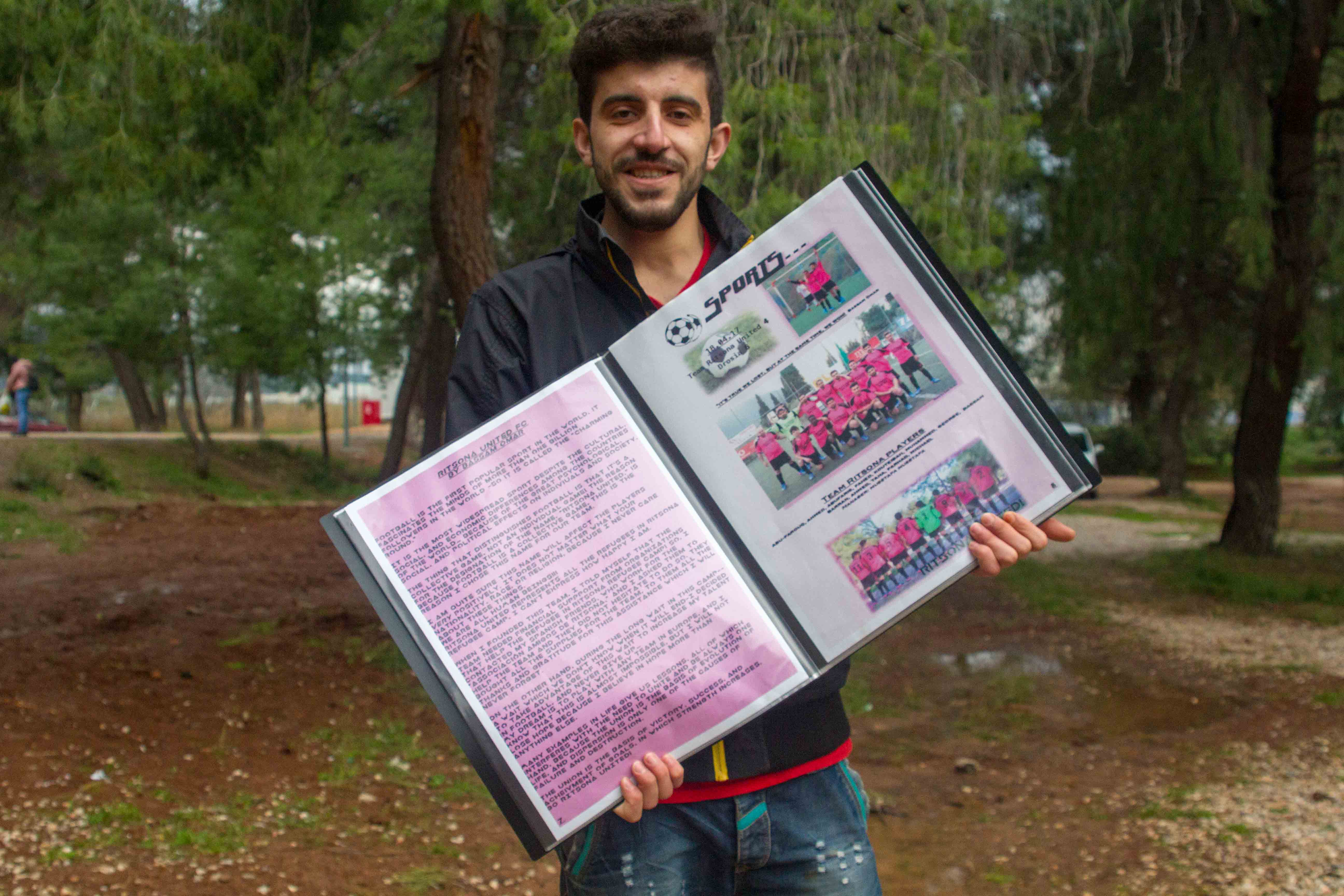 Hamza, 16, from Syria, wears a black ACAB beanie and penned a comic which distills the conflict with razor-sharp analysis beyond his years. It shows American and Russian fighter planes flying over Syria with the caption: ‘Stop the war in Syria. The powerful nations drink the blood of Syria.’

“People don’t understand that Syria was an incredible country with lots of wealth, history and people of different religions,” Hamza explains. “I drew this to show how foreign countries are stealing all of Syria’s treasures. I draw comics and I write articles to share my opinion with the world and tell them what is really happening in Syria. What I have seen makes me very angry.”

Hamza was present at the pro-democracy protests in Syria in 2011, whose violent repression by Bashar al-Assad’s regime led to the civil war. He wants to study political science, so he can play a role in improving the world – but his experience of European democracy leaves him unimpressed. 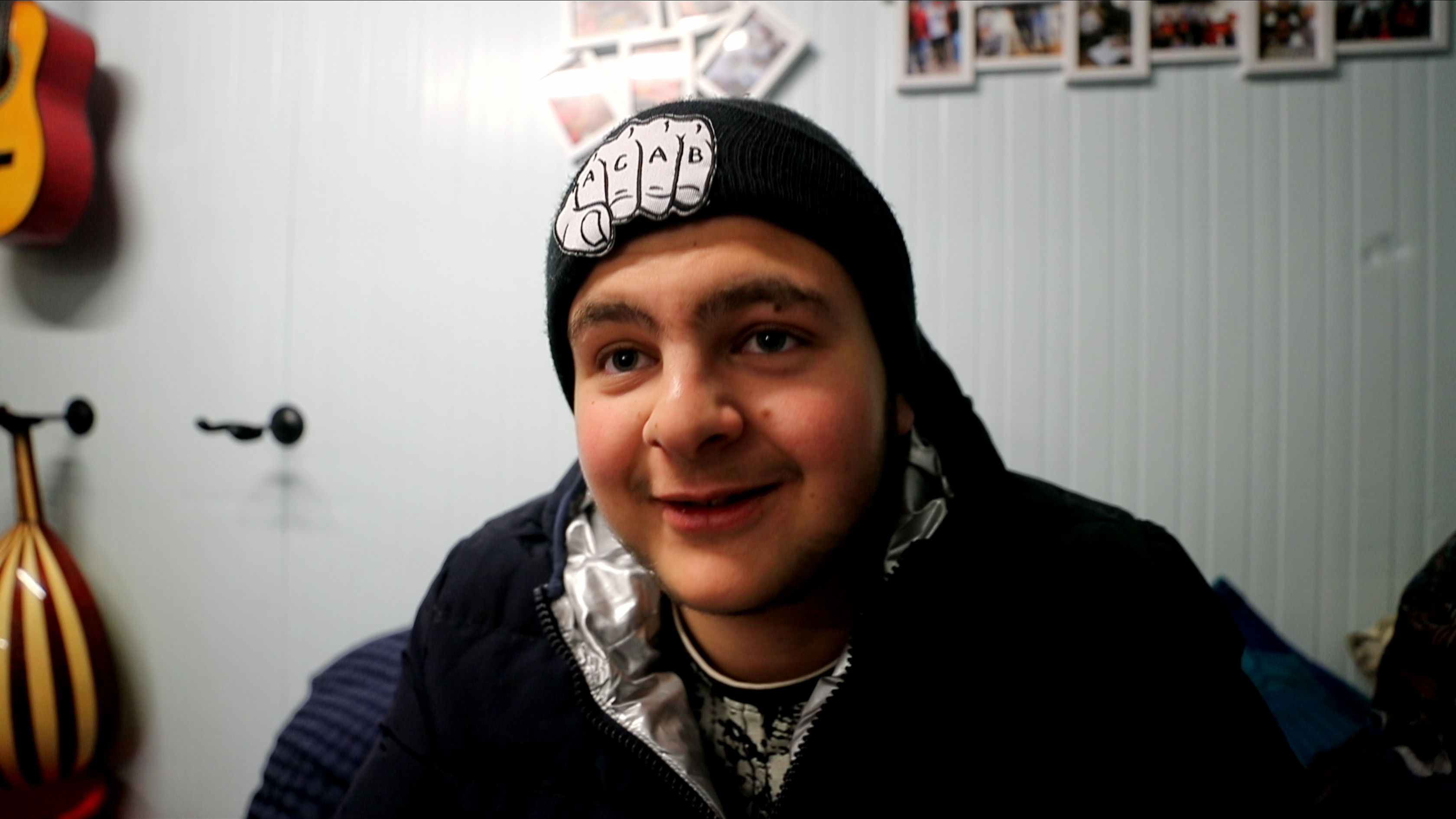 “The situation was so bad for me in Syria, but before I left and came to Greece, I thought Europe respected human rights and the dignity of people,” Hamza says. “But that’s not what I have seen. I’m scared that if I am relocated to Germany, people will ask me why I’m there. So I have decided to go back to Syria as soon as the war is over. If foreign countries stopped making war in my country, I would go back today.”

In September 2015, EU member states pledged to relocate 160,000 asylum seekers – including 106,000 from Greece and Italy. Two years later, the 28-nation bloc had relocated a mere 29,000. George and his younger brother Michael are some of Ritsona’s longest residents and are among tens of thousands still waiting in limbo. 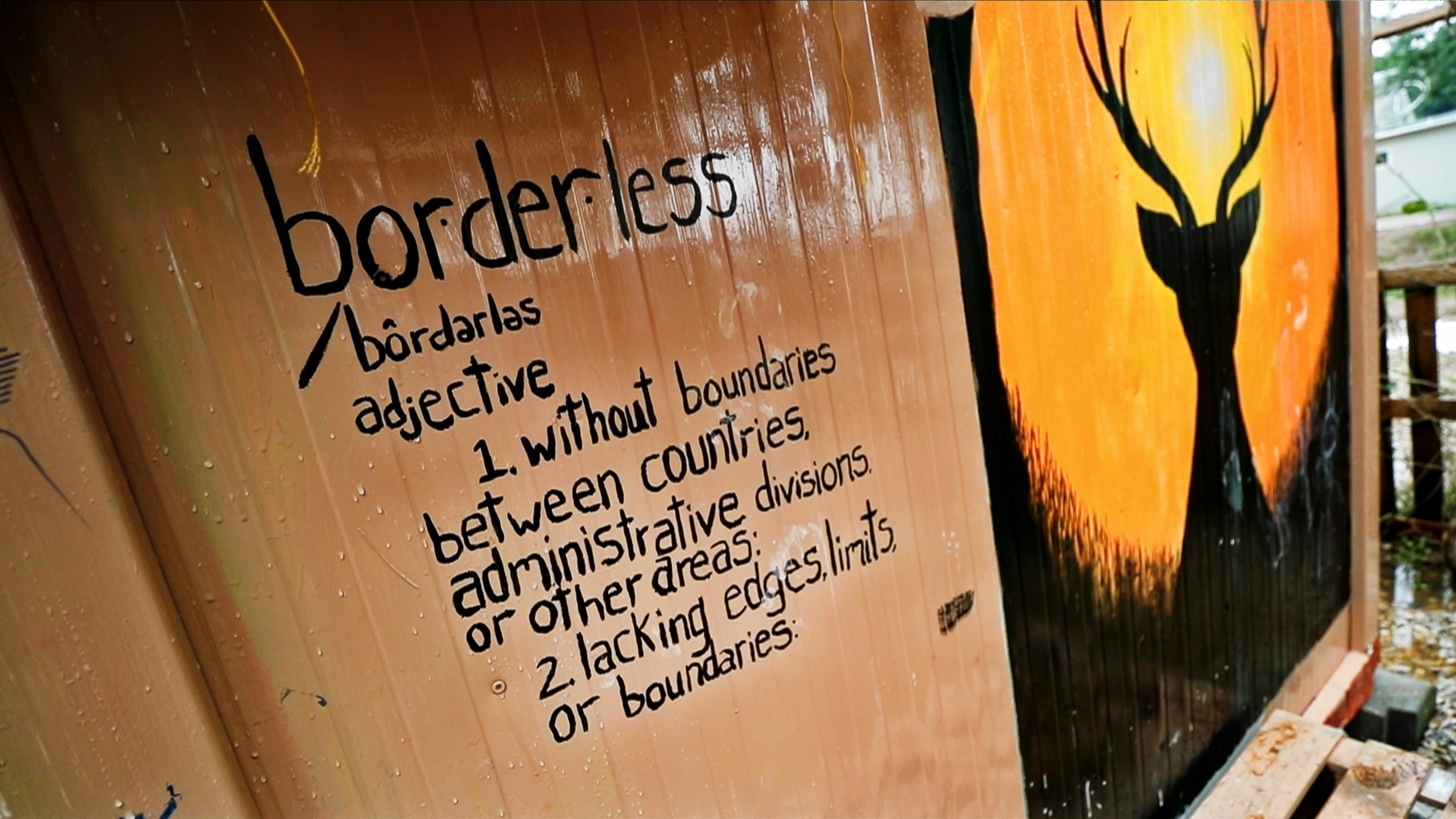 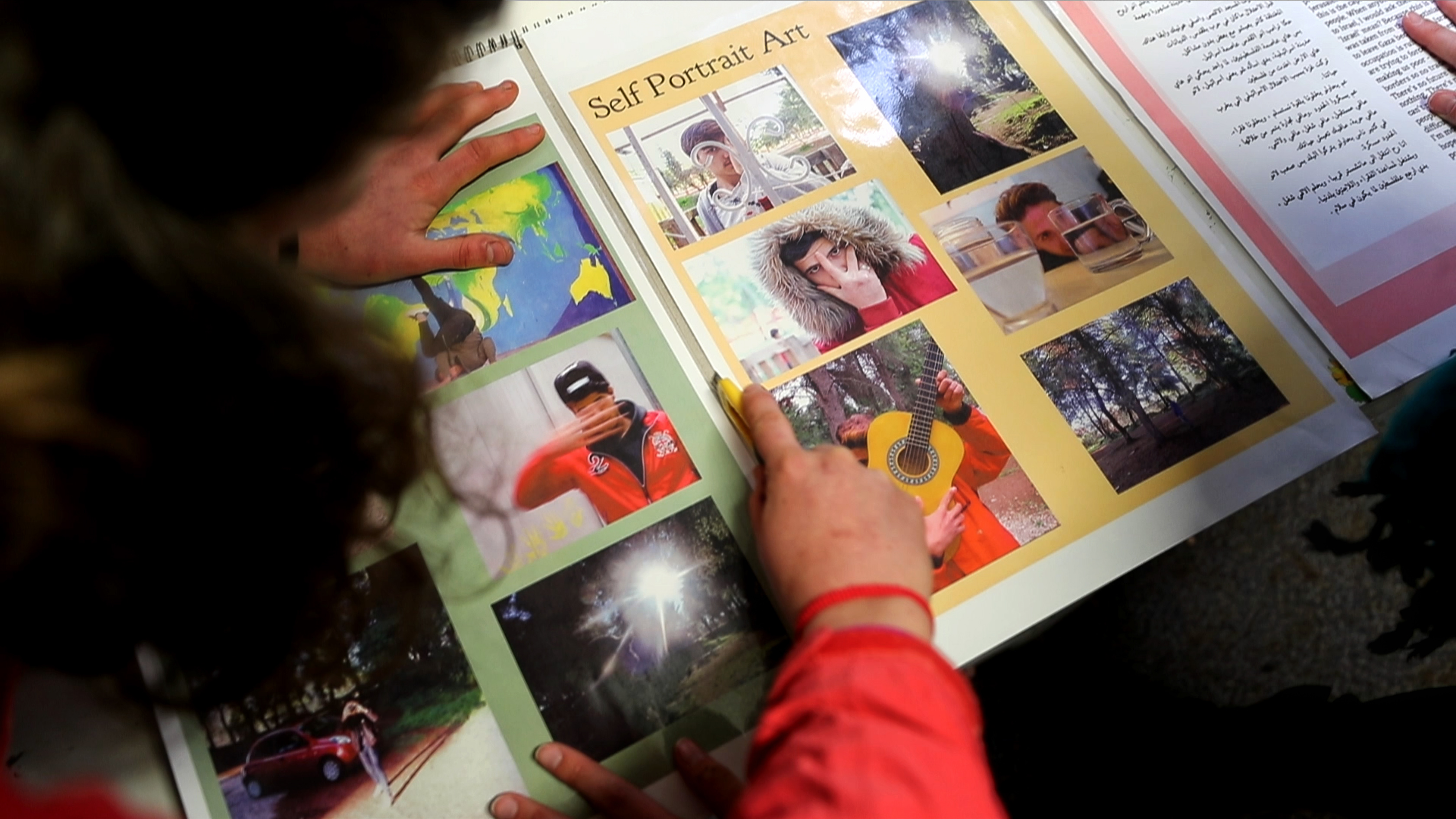 When they arrived in March 2016, people were living in tents, before refugees across Greece protested at deplorable conditions and were eventually rehoused in containers. But with the nearest town, Chalkida, a three-hour walk away and just two busses per week to Athens, Ritsona is still cut off from the outside world. When Help Refugees argue it’s cheaper to house refugees in city apartments, rather than camps, it all seems so unnecessary.

In escaping war, young adults like Michael and George have already experienced things most of us will never witness in a lifetime – but at the same time, they remain stuck in a children’s world. When they would normally be starting to spread their wings and build their own, independent lives, the boredom of such a frustratingly limited camp life is particularly hard to bear.

“Never give up,” George says, turning the page to one of his illustrated mottos. “I designed this to say, ‘we are strong, nothing is impossible’.” But later, talking quietly as the party begins to die down, he drops his guard and admits that after spending two years in a forgotten corner of Greece, he has sometimes come close to giving up. It’s not hard to understand why.

You can read every issue of Ritsona Kingdom Journal online.

Linkedin
RELATED ARTICLES
OTHER ARTICLES
After blocking the Scottish government’s gender recognition reform bill, Westminster is now devising further changes to the law to make it harder for trans people to self-identify.
Photographer Sean Maung reflects on documenting a small town in Pennsylvania afflicted by high levels of unemployment, poverty, violence, crime, and addiction.
Theo McInnes’s photos of the annual event provide an intriguing snapshot of contemporary Britain.
After building his reputation covering the US civil rights movement in the 1960s, the photographer went on to produce some of the most enduring images of the past century.
At his West Bank restaurant, Fadi Kattan established himself as the voice of modern Palestinian cuisine. Now, he’s bringing his innovative, bold flavours to the UK’s capital.
A recent High Court ruling against the right to wild camp in Dartmoor National Park sparked the largest land protest in history – and campaigners say their fight is not over yet.