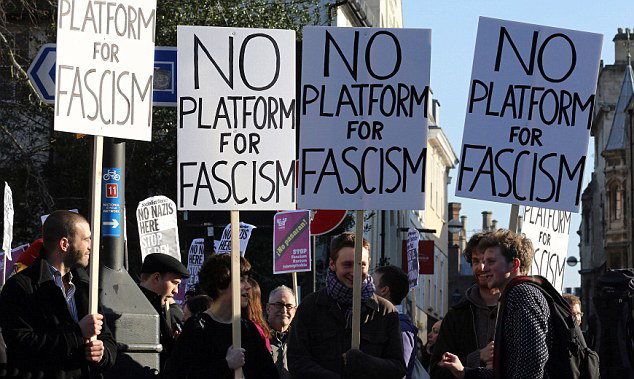 As protesters mobilise at the Oxford Union, where Marine Le Pen is scheduled to talk tonight, we consider some of their previously controversial guests.

As protesters mobilise at the Oxford Union, where Marine Le Pen is scheduled to talk tonight, we consider some of their previously controversial guests.

By giving the far-right political party leader, a major force of French nationalism known for her fascist views, a platform on which to speak, the Union continues its tradition of being “the last bastion of free speech in the Western world”, as labelled by former Prime Minister Harold Macmillan.

The protest raises an important question around the topic of free speech – particularly pertinent following the recent Charlie Hebdo shootings. The success of the French National Front in last year’s European Elections, along with UKIP, comes as part of an increasing European shift to the right.

“The Union believes in the principle of freedom of speech and we would encourage all members who disagree with an invited speakers view to attend the event and question the speaker. We allow our members to meet people face to face and make their own minds up. We invite no speakers who do not accept the right of our members to question them. Marine Le Pen will be answering questions from the audience after her address.”

Ahead of le Pen’s appearance, Huck takes a look at the five most controversial people to speak at the Oxford Union.

Human rights activist Malcolm X was an advocate for the rights of black people in the 1950s and 60s. He was, for a time, one of the most influential leaders of the Nation of Islam, a controversial Muslim group that was said to promote black supremacy.

In 1964 Malcolm X spoke at the union with the motion, “Extremism in the defence of liberty is no vice; moderation in the pursuit of justice is no virtue.” He addressed black exploitation at the hands of America, colonisation and imperialism.

Sinn Féin leader Gerry Adams has been one of the most important figures in the Northern Ireland peace process. He has consistently denied being a member of the Provisional IRA, however many have suggested that he was a key member of the terrorist group in the 1980s.

In 1983, he was elected president of Sinn Féin and became the first MP elected to the House of Commons for the party since the 1950s, although the party maintains its policy of absention from Westminster politics.

His voice was banned from being broadcast on television or radio by Margaret Thatcher in 1988, in order to prevent giving the IRA further coverage, however he appeared at the Union while still under this ban.

O.J. Simpson is a retired American football player, who was accused of the murder of his ex-wife and one of her friends in 1994. The case became one of the most highly-publicised in American history, with television news coverage of Simpson driving to the police station to turn himself in receiving 95 million viewers worldwide. The trial was televised in its entirety.

Simpson gave his only UK appearance in 1996 following the end of his trial, speaking of police racism, apologising for hitting his ex-wife, whose murder he was acquitted of, and attacking the American news media. He is now in prison for numerous felonies, including armed robbery and kidnapping.

Having joined the British National Party in 1995, Griffin soon became notorious for his extreme far-right views including the removal of multiculturalism, re-introducing capital punishment and the repatriation of ethnic minorities. He was leader of the party from 1999 to 2014.

Griffin spoke at the Oxford Union in November 2007 as part of a free-speech forum alongside Holocaust denier David Irving. His invitation to speak was hugely criticised, with many believing the Union should refuse to give fascism a platform – the same debate people are having today surrounding Marine le Pen’s appearance.

Outspoken Northern Irish Unionist politician and Protestant leader Ian Paisley has always been a figurehead of controversy. Over the 65 years he was active as a minister, Paisley regularly preached against Catholicism, ecumenism and homosexualilty. He was, like Adams, involved in the Northern Irish Troubles, leading the Democratic Unionist Party for almost forty years.

Paisley used his appearance on an Irish peace process panel at the Oxford Union in 1962 to attack Catholicism, sparking further protests from many. When he appeared at the Union again in 1967, he openly mocked the Roman Catholic belief that the wafer was actually the flesh and blood of Christ.

Linkedin
RELATED ARTICLES
OTHER ARTICLES
As Ukraine erupted in conflict, Brendan Hoffman jumped on the next flight – confronting his own shattered reality in the process.
As Greek radical left ruling party Syriza embrace the sounds of Patti Smith, we consider some other even more unlikely songs that became protest anthems.
Hong Kong has seen its biggest street demonstrations in a decade in a potential prelude to an Occupy protest in the former British colony's city centre. Huck asks the protesters why they are taking to the streets.