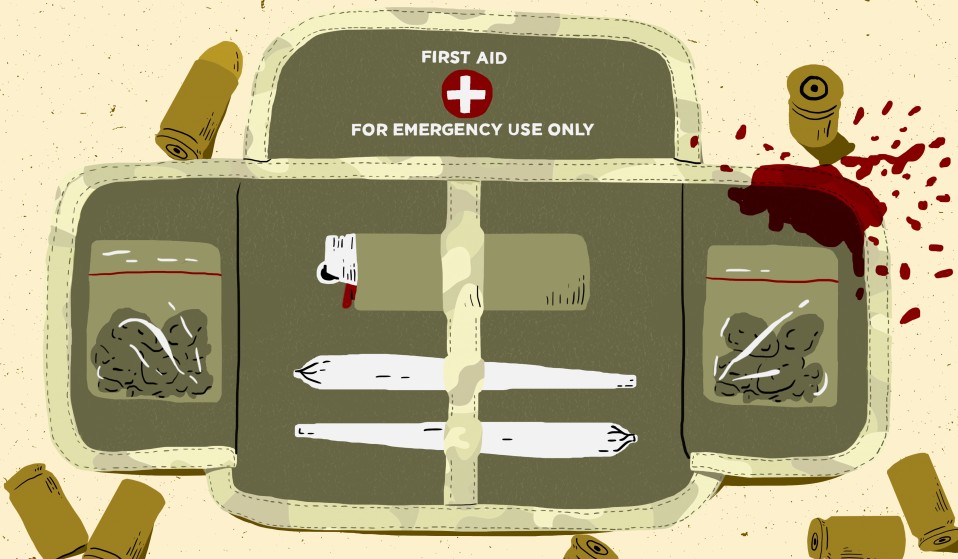 Serving as an infantryman in Afghanistan sent Paul into a black hole of drink and drugs. Now it’s medical marijuana helping him get his life back on track.

Serving as an infantryman in Afghanistan sent Paul into a black hole of drink and drugs. Now it’s medical marijuana helping him get his life back on track.

When Paul, a young British soldier, arrived at his checkpoint in Afghanistan in early March 2011, he remembers looking out from the tall guard tower, wondering where the first attack would come from. Manned by just 13 soldiers, Paul’s isolated posting was only 500 metres from the closest known enemy position and ten miles north of Lashkar Gar, the capital of Helmand province, which saw heavy fighting with Taliban forces between 2006 and the British withdrawal in 2014.

Looking over the cluster of walled civilian houses next to the checkpoint, in one direction Paul could see arid desert stretching into the distance, and in the other, maize fields and lush green jungle covering the two kilometres to the banks of the Helmand river. “We were waiting for action, excited and anxious all at the same time,” remembers Paul, who was just a 19-year-old infantryman.

During the course of his six-month deployment in Afghanistan, Paul’s unit was attacked two to three times per week, totalling around 100 ‘contacts’, which came at any time of day on a 360-degree battlefield. This young soldier took it all in his stride: dealing with Improvised Explosive Device (IED) attacks and ambushes while out on patrol, regular assaults on the compound, seeing friends wounded and sleeping just three hours per day to protect the area with his 13-man unit.

“I was totally focused when I was out there, working 18 hours a day of long, hard graft with temperatures above 35 degrees, even at night time,” he explains. “There was no time to think about anything personal. But when I came back I found it really hard adapt to civilian life.”

Five years after his deployment, Paul is still struggling to cope with the echoes of his experience in Afghanistan: grappling with post-traumatic stress disorder (PTSD), an anxiety disorder caused by very stressful, frightening or distressing events, which many soldiers suffer from.

Counselling and conventional pharmaceuticals have had little impact, but it has been medical marijuana that is helping him put his life back together and overcome the night terrors that have plagued him since returning from Afghanistan. Whatever the rights and wrongs of the invasion, it’s the young soldiers following orders who carry the scars, not Prime Ministers or Whitehall Generals.

Cannabis remains illegal in the UK. But Paul tells me he’s sharing his experience in the hope that the medicine which helped him might one day be made available to all soldiers still struggling with the traumatic experiences of service. But with all drug use – except alcohol – deeply taboo in the military, as well as a lack of support for cannabis as a treatment for PTSD in the therapeutic community, Paul, now 26, has chosen to speak under a pseudonym to protect his identity and his access to medicine. 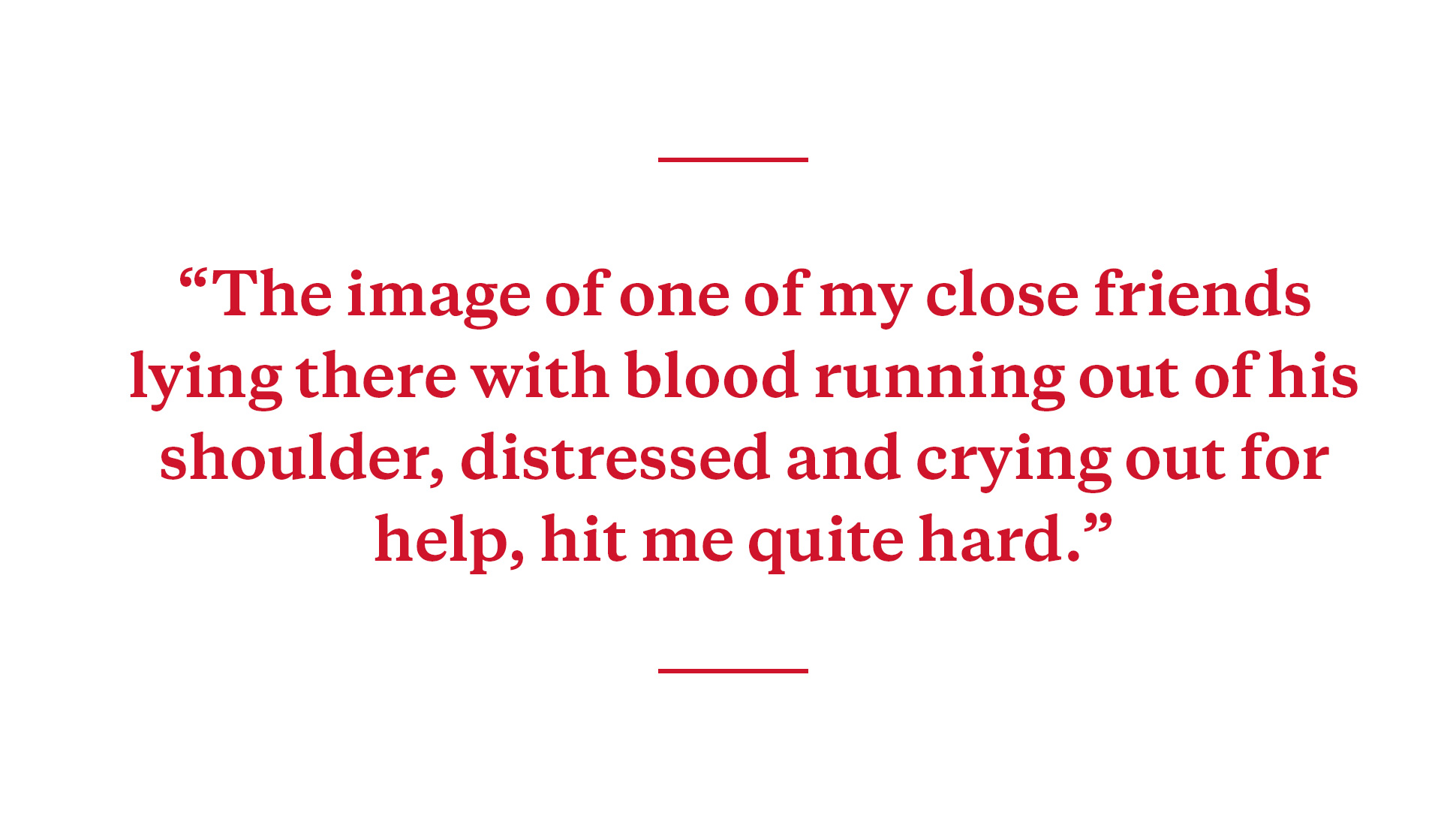 The memories that fuel Paul’s night terrors come from the many moments when he felt he was “looking death in the eye”. But one event affected him even more powerfully than the others.

Patrolling a small village in Helmand’s Nahr-e Saraj district, his unit came under fire. “It happens so quickly,” Paul explains.

“It’s a totally gut reaction, you go straight to your training.” After pushing back the Taliban fighters, Paul realised one of his friends had been hit, and needed to be evacuated by a military helicopter right away.

“It was pretty spooky, to say the least, quite surreal,” Paul says. “The image of one of my close friends lying there with blood running out of his shoulder, distressed and crying out for help, hit me quite hard.”

After his deployment ended, Paul returned to Europe, and found himself sinking into what he describes as a black hole. He couldn’t escape the feelings of uncontrollable anger and frustration. Paul turned to alcohol, ecstasy and cocaine to numb everything that was swirling around inside his head.

“It would give me a rage to the point that I was worried I would do something I’d regret,” he says. Although he didn’t know it at the time, Paul like so many others was grappling with PTSD.

Night after night Paul drank and drank until he could sleep. “The main issues I have from PTSD are insomnia and night terrors,” he explains. “My mind would keep racing and my wife was complaining that I was hitting her in my sleep. But drinking every night to try and feel better was taking me down a dark hole and I would wake up each morning feeling worse.”

Alcohol is the common go-to for soldiers like Paul who are struggling to deal with trauma. “People can be hesitant to seek help and I’ve seen many people turn to drink,” he explains. “Drinking culture is unbelievably high in the military and it’s the way most people deal with their problems.”

In a 2007 paper, the King’s Centre for Military Health Research found that 67 percent of men in the military showed signs of “hazardous” drinking, compared with 38 percent for civilians – and that “severe” problems were almost three times higher for men and nine times higher for women – with those who have experienced combat, like Paul, at the greatest risk.

Relief finally came in the most unlikely of places: a lad’s weekend in Amsterdam. “The morning we left I hadn’t been drinking the night before, just smoking (my first time) and I felt at peace.” Paul remembers. “There seemed to be a future, there wasn’t a total doom, which is how I had been feeling for months.”

“I was totally against marijuana, like most soldiers are,” Paul says. “The military push the whole Reefer Madness message and do everything they can to keep soldiers away from it. That’s a big reason ex-soldiers who use it for PTSD or other conditions don’t want to talk, because they know it will be seen negatively by the community.”

At this point, Paul had left the army but was yet to be been diagnosed with PTSD. He embraced cannabis as a way to escape the grip alcohol had taken over him, and finally he got a decent night’s sleep. Waking up with a clear head each morning helped him begin the process of getting himself back on track and lifting his depression, which he eventually discovered was a product of the PTSD.

Now that Paul understands his condition, he’s been able to draw on the experiences of veterans in America, where there is a far greater understanding of marijuana’s potential to treat PTSD. For thousands of soldiers in the U.S., marijuana is a better alternative to the cocktail of pharmaceuticals prescribed to vets to deal with each of the specific symptoms of PTSD, from insomnia to anxiety, depression and psychosis. Addiction to prescription drugs is also on the rise among British soldiers. 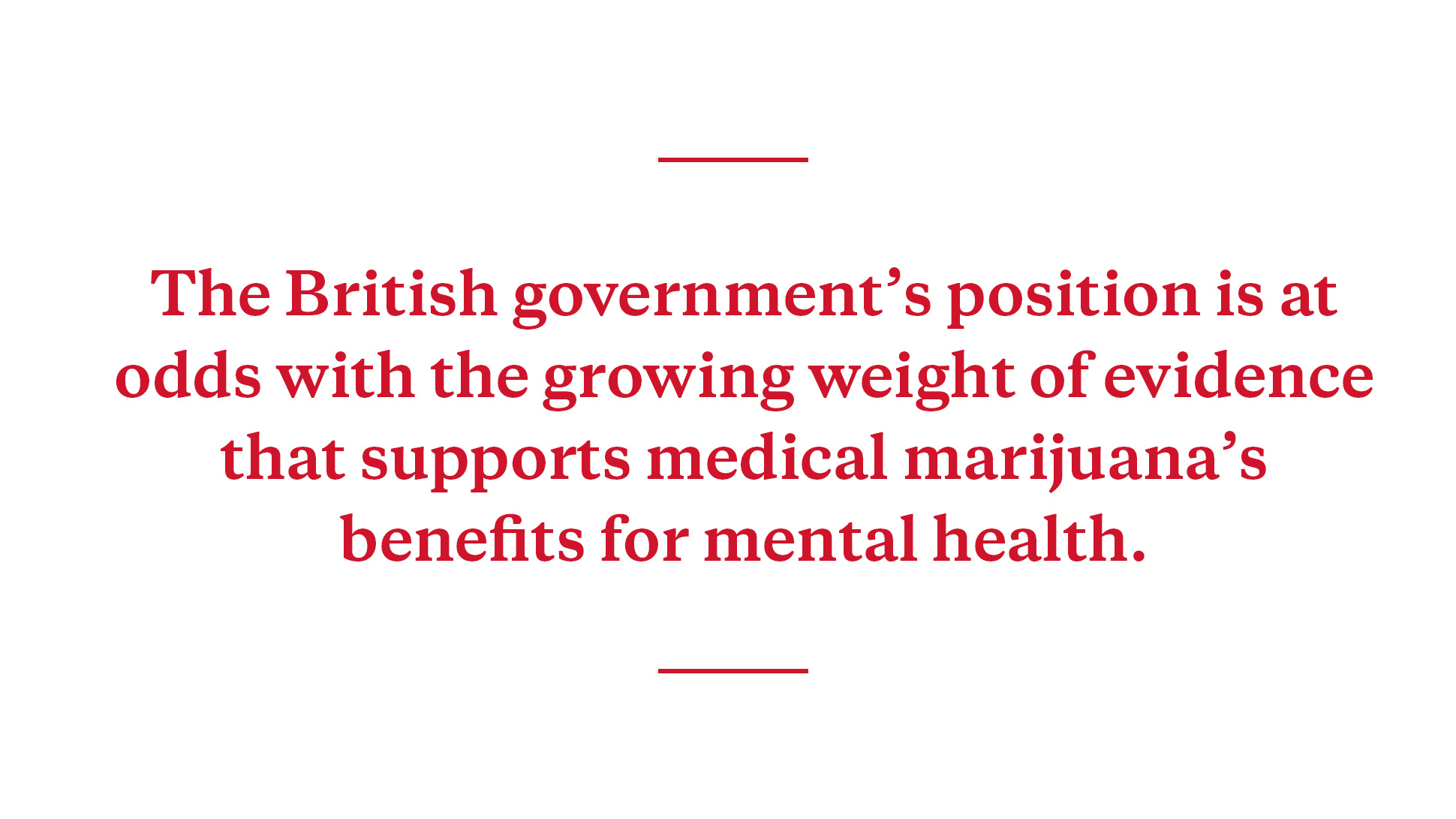 Through his research and experiments, Paul has been able to identify the Indica strains of cannabis that help him sleep, reducing his anxiety and anger issues. However, he risks his job and more if he’s ever arrested for possession.

The Ministry of Defence’s official position on medical marijuana for ex-service-people echoes that of the UK government, which claims that cannabis has no medicinal value. “The mental health of all who serve our country is of the utmost importance, and so we follow the relevant national guidelines of approved treatments when supporting our people,”  a spokesperson for the Ministry of Defence told Huck, adding that marijuana is not a NICE-accredited treatment for mental health and that Armed Forces mental health remains good, with PTSD still rare.

Indeed, a 2014 study found that 6% of British combat troops experience PTSD, which is much lower than estimates of 20-25% among American soldiers (in part due to their longer tours), but the same research revealed a correlation between deployments and alcohol misuse and post-deployment violence in combat troops. However, this still represents significant numbers for whom PTSD is crippling, without effective treatment.

The British government’s position is at odds with the growing weight of evidence that supports medical marijuana’s benefits for mental health, says Professor Mike Barnes, who was tasked by the All Party Parliamentary Group on Drug Policy Reform (APPG) in 2016 to undertake the most comprehensive review yet of evidence on the use of medical marijuana from the around the world. His report found cannabis to be effective in tackling anxiety, post-traumatic stress disorder and, to a lesser extent, depression.

“There’s reasonable evidence that medical marijuana helps PTSD,” Professor Barnes tells me. “The causes of PTSD are little understood, but we have a number of good studies that show [medical marijuana] is useful for calming down some of the significant effects of PTSD, especially anxiety.

“Obviously it won’t help everybody but there’s no doubt that it helps a significant proportion of people. Most medications don’t work with PTSD and they come with a whole range of side effects. There’s so little else that can be helpful, except psychological therapies, counselling and such-like.”

Many PTSD support groups reject the use of medication and see verbal therapies as the gold standard. They can work for many, but often fail to provide short-term relief and can take many hours of treatment to reach significant breakthroughs. But for Paul, neither medication or counselling made much impact on his condition, and living in rural Scotland, accessing therapy can be difficult: he’s been waiting four months to see an NHS mental health nurse, due to a lack of staff and resources to meet demand.

Paul’s PTSD was preventing him from leading a normal life and his slide into alcoholism was putting him and those around him at risk. But now he’s managing his symptoms with cannabis, developing his career and raising his young family.

He feels passionately that something which has helped him so profoundly should be available to all those who need it – especially those attempting to come to terms with traumatic experiences such as frontline combat. But he’s still skeptical if any treatment will ever provide a cure-all solution for what he went through. “Cannabis almost helps you to forget. I’m not sure if I’ll ever be able to completely get over what went on out there. I just don’t think it works that way.”

Find out more about the campaign for medical marijuana at End Our Pain.

Linkedin
RELATED ARTICLES
OTHER ARTICLES
Birdy Chu reflects on documenting the historic moment in which the territory was formally passed back from the UK to China.
For over a decade, gamblers have won big by employing people to place live bets from the court. But does this dubious method still work?
A 37-year-old woman shares how her abortion led her to become a clinic worker, and the abuse she’s received in that role.
Thousands attended the annual event this year to wheelie through the city and call for ‘knives down, bikes up’.
Yesterday thousands gathered outside Buckingham Palace after news of the Queen’s death broke.
As the Scottish government announces a rent freeze, an activist with Living Rent who fought and won shares how they did it, and what must come next.