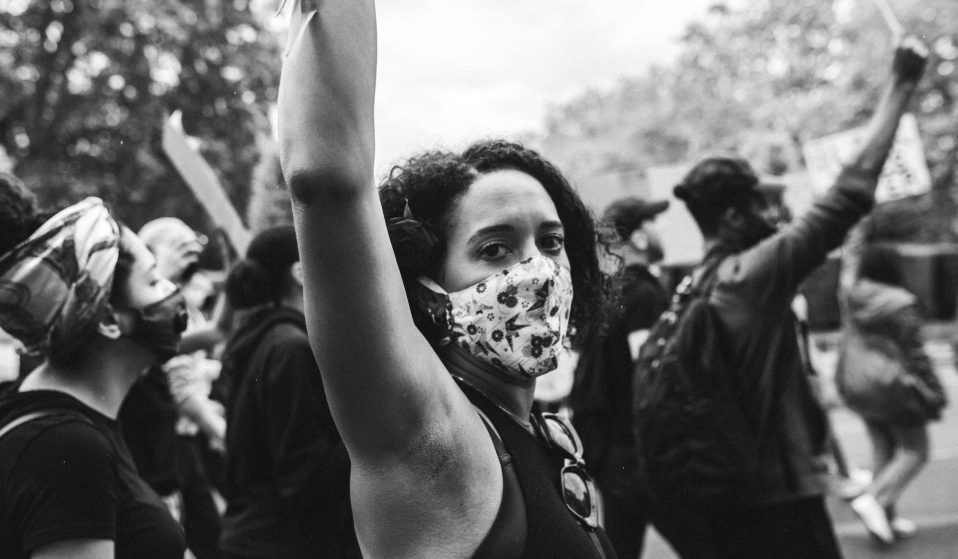 We speak to a member of the youth-led Tribe Named Athari – formerly known as LDN BLM – about the recent protests, and how they plan to keep the fight going.

We speak to a member of the youth-led Tribe Named Athari – formerly known as LDN BLM – about the recent protests, and how they plan to keep the fight going.

On May 25, a Minneapolis city police officer killed George Floyd by kneeling on his neck for nine minutes. A video of the killing went viral, sparking protests around the world. Here in London, tens of thousands of people have been out on the streets in five weeks of demonstrations that have seen clashes between Black Lives Matter demonstrators and the police, protests attacked by the far-right, and kettles long into the night. As well as this, there have been powerful speeches, jubilant scenes of resistance, and moving moments of silence and reflection.

As momentum around the protests seems to wane, we caught up with Ferns, one of a group of 16-22-year-olds organising with Tribe Named Athari (LDN BLM), a newly formed group who have been facilitating the recent protests in London. As part of our Lock-In series, we asked him what it’s been like, what people can do to help, and – crucially – how they plan to keep the fight going.

How have the last few weeks affected you?
Ferns: The last three or four weeks have seen a lot of uprising, which has meant leaving the house during a pandemic. I feel like that shows the world how important what’s going on is.

I’ve seen the way that, when fighting for our rights peacefully, the police either find an excuse or create an excuse to demoralise and dehumanise us – they’ve pulled off dreads, made racist comments, and been part of the problem rather than being part of the solution. It’s not just the police, it’s the media as well – the vast majority of the UK press hasn’t reported fairly on what’s going on.

Why is police brutality in the US causing protests in the UK?
Ferns: The experience as a young black person in the UK is pretty much an experience that black people around the world share. When someone gets killed in the US, they don’t get justice, and we’re able to relate to that. Edson da Costa, Mark Duggan are just two of the many, many victims of UK police brutality. There have been over 1,700 people killed either by the police or in police custody in this country since the ’90s, and none of them have got justice.

The systems that are supposed to protect and aid us, for Black people a lot of the time they do the opposite. They’re there to kill us, detain us, and stunt our growth. It’s hard for a lot of us to have this conversation, because when does it stop?

Are the protests slowing down?
Ferns: Momentum is starting to wane, and that’s not necessarily a bad thing. It means there’s space to create the infrastructure that should have been there; the infrastructure that should have allowed for us to rise up and get justice for our brothers and sisters in this country. We need to be able to hold the government accountable for Grenfell, for Shukri Abdi’s death, and for Belly Mujinga’s death. The infrastructure that’s needed is going to take some time to build, but what it starts with is community. There are so many initiatives and organisations that are led by Black people, for Black people. The issue is either funding or reach, and that’s what we as a community need to get together to push in the short term. Hopefully, we’ll see the long term effects of that.

How can people outside the Black community help?
Ferns: I think the biggest thing that any ally could ever do is educate, unlearn and be ready to educate those around them – that will have a long term change. You can fundraise for these protests and it will help in the short term, but fundraising can never replace education. Some people don’t understand why we feel a certain system may need to be defunded or dismantled, but that takes understanding and education. It even goes down to understanding a Black person’s anecdotal experience, and the willingness to actually listen. So that’s what I would advise any person who would like to be an ally to do: to educate, unlearn and listen.

What protests can people still take part in?
Ferns: All Black Lives UK are planning to do protests every Sunday until their demands are heard – so if you are able to, and if it is safe for you to get out, you can still join. There are also virtual protests happening, with a lot of interactive workshops and webinars happening over the next month or two. It’s just to push the point that there are other ways to join in, because we have to be mindful we are still in a pandemic, so there needs to be alternatives for those that are at high risk.

This interview was taken from our YouTube series, The Lock-In. Watch the full episode here.

Linkedin
RELATED ARTICLES
OTHER ARTICLES
Financial turmoil is pushing people who work in the sex industry into more dangerous and desperate situations as a means of survival.
Yesterday thousands gathered outside Buckingham Palace after news of the Queen’s death broke.
Thousands of protestors gathered in Westminster to express their sadness and fury at the fatal police shooting of a young Black man in Brixton.
For over a decade, gamblers have won big by employing people to place live bets from the court. But does this dubious method still work?
In his 2008 series, the photographer pictured himself as Angela Davis, Martin Luther King Jr., Malcolm X, and other prominent figures.
With skyrocketing rents, packed out viewings, bidding wars and more, renting in London has never been harder.