At just 23 years old, Nottingham’s Nadia Whittome stands at the brink of a life-changing election for herself and for her country.

At just 23 years old, Nadia Whittome – the Labour candidate for Nottingham East – stands at the brink of a life-changing election for herself and her country. In this Huck election special, we join her on the campaign trail to find out how she got here, and what she hopes to achieve next.

Nadia Whittome did not expect to become the Labour candidate for Nottingham East. After the selection campaign was suspended for months, the eventual contest lasted just a week. “We had all hands on deck,” she says, as we sit eating Thali in her campaign headquarters, nestled on the first floor of Nottingham’s Indian Centre. Seven days of frantic campaigning saw her win the vote in her local Labour Party – just days before the announcement of the snap election.

Until a couple of weeks into the campaign, Nadia was employed in Nottingham as a hate crime worker. She grew up in the Meadows area of the city, one of the most impoverished areas. It’s safe to say, at 23, Nadia is a different kind of candidate from most running in this election – but her uniqueness goes far beyond her age.

“My community was decimated by the bedroom tax,” she remembers. “It wasn’t unusual for people to make three shepherd’s pies to give to neighbours because families were struggling to put food on the table. My mum wasn’t working, she’d been out of work for the last four years, and I was just getting angrier and angrier.”

It’s this direct experience of austerity and cuts that sets Nadia apart from most other candidates running across the country. “I’m fortunate that I didn’t tip over the edge,” she says. “There was a local group organising against the bedroom tax. I joined them, and then from there progressively became involved in more activism, was able to do an access course and go to Uni, and became an active trade union member.” 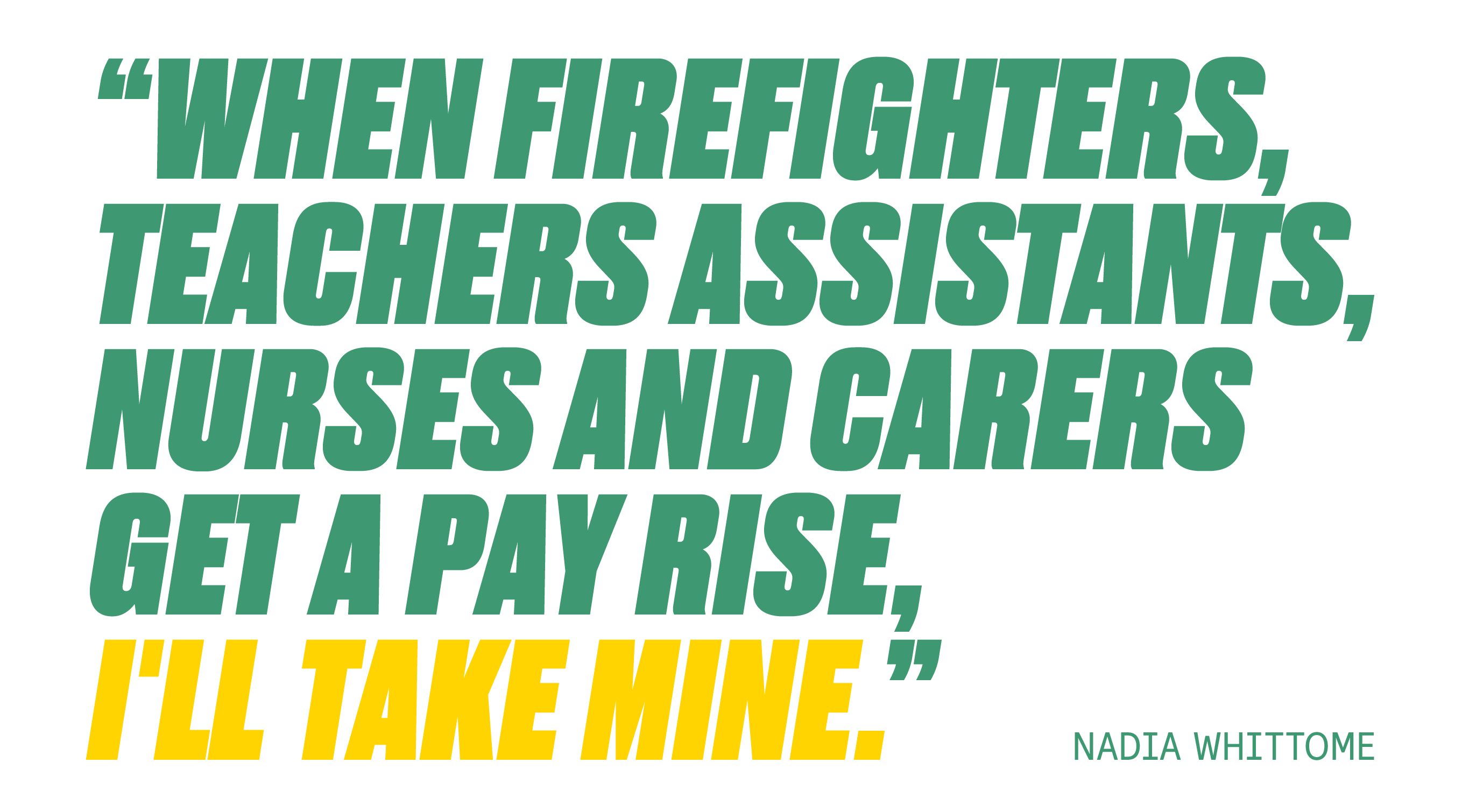 MPs salaries are currently set at £79,468, but by aligning her pay to the national average wage, Nadia will take home approximately £36,000. “[The average UK salary] is higher than my current household income and it’s not about saying that MPs don’t deserve the thick end of 80k – I think we all deserve a pay rise – but when firefighters, teachers assistants, nurses, carers get a payrise, I’ll take mine.”

Until the election was called, the constituency was represented by Chris Leslie. Elected in 2010 as a Labour representative, Leslie left the party earlier this year to become an Independent. When he was first elected to Parliament in 1997, Leslie was the baby of the house –  the name given to the youngest member of parliament – having won just a month shy of his 25th birthday.

If Nadia wins on Thursday, she too will be the ‘baby’ of the house. That, however, is where the similarities start and end. As we walk around the streets of what she hopes to become her constituency, picking up litter, she tells me that Leslie is deeply unpopular in the area and was widely criticised for not being visible enough. “There’s a lot of anger about a lack of political representation in the past,” she says. “If I’m elected, I’ll have been done so on a platform of shaking the table – not to buddy up with the establishment. I’m not there to become part of it, but to keep pushing for change.”

In many ways, it all sounds very familiar. The idealism of any candidate in the moments before they enter into the Westminster machine is infectious, but with Nadia, it feels like there’s a chance it might actually last.

“It’s going to be daunting walking in there, but what’s most important for me is not to lose sight of what the campaign is about,” she says. “It is – and always has been – about all of us. From the beginning, it’s been a grassroots campaign and that’s not going to stop when I’m hopefully elected as an MP. What I’ll be thinking most about is how we keep the non-hierarchical structure, how everyone’s voice gets heard and how I, as the representative, can amplify them.”

Nadia sits on the precipice of a life-altering election, for both her and the country. She’s part of a cohort of new candidates – like Ali Milani who is challenging Boris Johnson in Uxbridge, or Faiza Shaheen who is challenging ex-Work and Pensions secretary Ian Duncan Smith in Chingford – who represent a sea change in the kind of politicians we’re used to seeing in the UK. The daughter of immigrants, with lived experience of both austerity and the public sector workers fighting to hold back its devastating impact, Nadia represents the real change that the country so desperately needs. Whether she will actually be able to affect it in the draconian hallways of power, fingering their way around the chambers at the heart of our democracy, is yet to be seen.

Linkedin
RELATED ARTICLES
OTHER ARTICLES
After fleeing the war in Ukraine, people are finding it impossible to secure affordable and decent housing in the UK.
Activists and campaigners are fighting back against new laws that would seriously undermine the ability to take industrial action, calling it an attack on fundamental workers' rights.
A new podcast is opening up the conversation between trans women and trans amorous men in the hope of building coalitions.
Jeffrey Henson Scales intimate portraits and protest images of the BPP and its leaders offer a rare insight into organisation at a time of societal upheaval.
A new law change is enabling Britain’s donor-conceived children to know the truth about their origins – but campaigners say the fertility industry must do more to protect people.
David 'Dee' Delgado’s photo project is about honouring and uplifting the city of his youth, and a world rapidly disappearing under the relentless onslaught of gentrification.