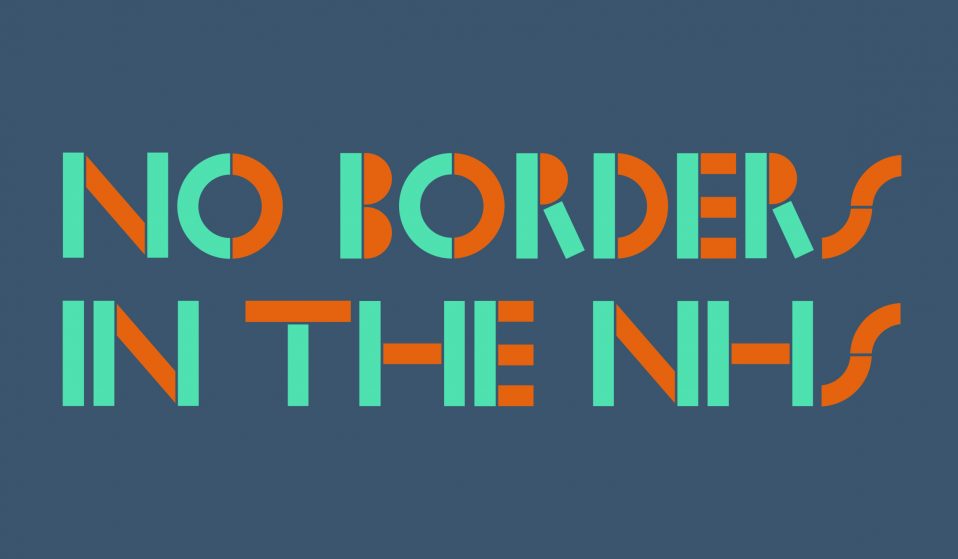 Migrants can be charged up to 150 per cent of costs upfront for UK medical care, with many being denied lifesaving treatment. Journalist Bethan Staton meets the staff who are taking a stand.

Migrants can be charged up to 150 per cent of costs upfront for UK medical care, with many being denied lifesaving treatment. Journalist Bethan Staton meets the staff who are taking a stand.

Irial’s friend S, an Eritrean asylum seeker she had met in Calais, was appealing an asylum claim in the UK. After a smear test revealed abnormal cells, she had to undergo a minor operation. A few weeks later, she was sent a bill for the surgery – one she couldn’t possibly afford, turning an already traumatic experience into a crisis.

Irial was horrified, and though S won her asylum appeal and had the bill cancelled she began to look more closely at borders in the NHS. She realised the problem of border checks in healthcare was bigger than she’d grasped – and growing.

She has since begun organising with activist group Docs Not Cops, and says the situation has become brutal. “When I first started getting involved it was about theoretical risks,” Irial said. “Now we’re actually seeing people being denied treatment on a daily basis – including when it’s lifesaving.”

The current situation is the result of years of restrictions that have escalated since the 2014 immigration act. Then, the government introduced an immigration health surcharge – now pegged at 400 per year – for people with limited visas. Since, a statutory requirement has been placed on NHS Trusts to charge migrants up to 150 per cent of costs upfront for most types of medical care, withholding it if a patient can’t pay. It’s a policy that health workers and policy experts say undermines the role of doctors and nurses, stops migrants accessing the care they need and, ultimately, risks harm and even death.

Irial is one of many health workers aghast at the policy. For the last year Docs Not Cops, Medact and Migrants Organise have been building campaign momentum, and last month launched a nationwide Patients Not Passports campaign toolkit, supporting migrants, health workers and campaigners to claim and campaign for equal healthcare access. For health workers like Irial, action at work might include challenging colleagues who are asking for ID, checking if a patient is exempt from charging, or informing patients of their rights.

What’s really important, however, is not individual refusal but collective action. According to Medact organiser James Skinner, activists are communicating at ward level, telling colleagues of what’s happening, and building strategy through workshops. Groups then escalate to Trust level, to get institutional backing power behind staff opposition to checks.

Last night we launched the https://t.co/AoFhcgb0vc toolkit
-to help people advocate for people facing charges for NHS care
& to take action to end NHS immigration checks+upfront charging
It was a great event and there are a lot of people to thank! Thread ⏬⏬#PatientsNotPassports

“For something to happen there needs to be a critical mass – a large enough body of doctors saying, ‘we are not doing this,’” Irial says. Campaigns in Cambridge, Birmingham, Liverpool and London are ongoing, and being pushed with demonstrations, petitions, and creative tactics (like Patients not Passports lanyards for hospital staff). In the biggest breakthrough yet, the British Medical Association last week called for complete abolition of charges.

But there are significant obstacles to action – not least that many health workers don’t know immigration enforcement is happening. In most hospitals, James explains, checks are enforced by Overseas Managers, whose role is monitoring provision to non-British citizens. The situation varies hugely between wards and hospitals, and even if frontline staff know what’s happening they’ll likely feel detached and unable to challenge it.

When they are confronted with it, however, charging can mean harrowing choices. A patient who can’t afford to pay may be too sick to leave hospital, forcing doctors to manage their condition without treating them. Seb Casalotti, a medical student in London, recalls a witnessing a patient who had lung problems and needed further tests. But he couldn’t pay so doctors gave him tuberculosis medication – the only free treatment that might help:

“It seemed like resistance in a way – but this was a case of a patient being harmed because there was no other option available,” Seb says. He’s now involved in organising for Docs Not Cops among medical students, and believes discussions about borders in healthcare should be integrated into training.

“We’re told so much about the social determinants of health, but we’re rarely encouraged to think about the structural determinants, and how we can raise our voices to challenge what’s going on,” he says. “We’re familiar with the framing of who has access to resources, but we don’t ask questions about who has access to those resources and why. Health is a right, not a privilege – why are you deemed more deserving of it if you happen to be born in a particular country?”

Seb and others at Docs Not Cops believe having these conversations can help challenge a government narrative of migrants being scapegoated for problems caused by underfunding of the NHS. For them, insisting on patients not passports is also about pushing back against ongoing privatisation and stripping back public services.

“A combination of anti-migrant hostility and austerity has created a perfect storm in which access to public services more broadly is being challenged,” James says. But he also believes things are changing – and that there’s strong support for tackling distinctions about deservingness when it comes to health.

“People can see this undermines some of the fundamental building blocks of society,” he says, finally. “It prioritises policing and immigration controls over services for those who need them. And people obviously object to that.”

Linkedin
RELATED ARTICLES
OTHER ARTICLES
Rhiannon Adam spent three months capturing an ageing society wracked by division, isolation, and the aftermath of scandal.
Financial turmoil is pushing people who work in the sex industry into more dangerous and desperate situations as a means of survival.
As the Scottish government announces a rent freeze, an activist with Living Rent who fought and won shares how they did it, and what must come next.
A group of young Palestinians have found temporary freedom in the act of parkour, reimagining wreckage and ruins as a series of high-octane playgrounds.
By turning a real-life crisis into daytime television fodder, TV bosses have once again shown themselves to be completely out of touch with audiences.
Ahead of the release of their first collaborative album, the producer and rapper talk psychedelics and the state of UK hip hop.