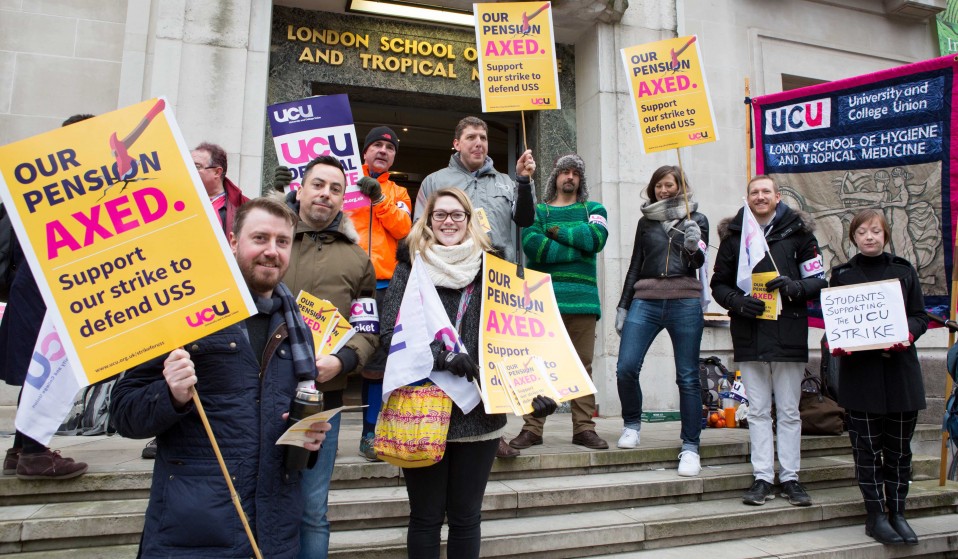 As momentum picks up, the countrywide lecturer strikes are raising a hugely important question: Who do our universities really belong to?

As momentum picks up, the countrywide lecturer strikes are raising a hugely important question: Who do our universities really belong to?

I was cooking dinner on Monday night when my phone buzzed. And buzzed. Many times. News was coming through that UCU union negotiators had reached a terrible deal with university employers that would end the strikes taking place in 64 institutions over devastating cuts to our pensions. The union committee with the power to call off the action was due to meet the following morning which meant that members had just over 12 hours to consider their position.

At Goldsmiths where I teach, we called an emergency meeting for 9am Tuesday. Over 100 of us – a significant number given the size of the institution and the short notice – packed into the Students’ Union and called on our union to reject the deal. Not a single voice spoke in favour of accepting a package that would see increased staff contributions in return for lower benefits and no guarantees that this would protect our pensions for more than three years. Members were outraged that three weeks of fantastically well-supported strike action had generated an offer that fell staggeringly short of our expectations.

This was the pattern across the country where 10,000 people signed a petition urging rejection and at least 43 UCU branches threw out the deal with barely a murmur of opposition. In Leeds, the room was so packed that members had to vote through the window while #NoCapitulation emerged as the rallying cry of a movement determined to secure pensions justice. By lunchtime on Tuesday, UCU’s Higher Education Committee had announced that they had listened to members and were rejecting the deal.

What started out as a rather narrowly defined dispute – to oppose the move from a ‘defined benefits’ to a ‘defined contribution’ pension – has transformed into a wider struggle to shape the ‘soul’ of the university. Students faced with mounting debt are taught by staff, many of whom are increasingly on short-term and zero hours contracts, in institutions that have generated record surpluses but are, apparently, unable now to provide the income in retirement to which we are entitled.

It’s market, not educational, logic that demands that these institutions try to shift the liabilities of a mutualised pension scheme onto individual members of that scheme so that they can preside over a leaner and more flexible higher education system. Campuses, after all, are run more like profit centres than sites of learning. And our USS pension scheme is not a benign charitable foundation but an enormous international investment fund with £60 billion in assets and which recently rewarded its chief executive with a 17 per cent pay rise (taking his salary up to £566,000) for presiding over a bumper year. Yet this is the same management that insists that there is a huge hole in the middle of the fund and that this ‘deficit’ must be addressed by scaling back what it pays out to ordinary members.

The extension of the market into university life is, therefore, at the core of this strike and it has inspired a shared understanding between staff and students of the problems we face. At Goldsmiths, students arrive at 8am every morning to bring us ‘solidari-tea’. We have seen ‘exorcisms’ (of the market from the College), picket line poetry, an inspiring series of teach-outs, staff-student forums, and a genuine flowering of debate around how our universities should be democratised.

Now we hear that students have occupied some 16 universities, both expressing solidarity with the aims of the UCU strikes but also articulating their own demands around housing, governance, transparency and union rights for campus workers. An attack on our pensions, it appears, has miraculously served to galvanise a student movement that had laid dormant, or been written off as infected by the individualist mentality of ‘paying customers’, since the 2010 revolts against the trebling of tuition fees.

Striking staff are now set to return to work – and students to their classes – ahead of a potential further bout of strikes to hit the assessment period in the summer term. Students will, understandably, be anxious about this action will impact on their exams and coursework. My response is that the employers’ determination to impose an inferior pension on us, together with their obsession with league tables, PR campaigns and vanity projects, is devaluing the very education that striking staff are committed to defending. We are desperate to get back to work but not before we have secured guarantees that our pensions will not be diminished when we believe there is no reason to do so.

We will need to find ways to maintain our momentum in the weeks ahead. We will need more teach outs on the picket lines, better coordination with students, and more exposure of the undemocratic governance structures of our pension scheme and of the role of the government’s Pension Regulator. We will also need to secure more support from other workers whose prospect for a decent pension (or a pension at all) will be improved if the university strikes are able to show that pensions are not a luxury item but an essential part of pay packages.

The strikes pose a hugely important question: Who do our universities belong to? Unelected governors? Unaccountable pension scheme trustees? Overpaid vice-chancellors? Or the staff and students who make universities tick. We will find out the answer soon.

Des Freedman is Professor of Media and Communications at Goldsmiths, University of London and Vice President of Goldsmiths UCU. Follow him on Twitter.

Linkedin
RELATED ARTICLES
OTHER ARTICLES
Thomas Hoepker‘s images taken during a road trip across America provide a searing social commentary about a divided country.
Whether it's partygate, the climate crisis or the spiralling cost of living, the fightback begins on the picket lines writes Tommy Vickerstaff
In her new book, the author explores the country’s housing crisis in human terms and calls for radical action to address a broken system.
Finland-born photographer Sirkka-Liisa Konttinen looks back on her decades-long documentation of life in Northern England.
A new edition of a seminal book brings together iconic images of the band onstage in their full glory and backstage in moments of unguarded camaraderie.
The last few years have seen an increase in LGBTQ-led initiatives to feed the hungry, with many finding ways to stay afloat despite the challenges.