Look at Kibera, Africa’s largest slum, through Octopizzo’s eyes and you’ll see talent everywhere. The Kenyan rapper brings colour and true upliftment by giving back to his own roots.

Look at Kibera, Africa’s largest slum, through Octopizzo’s eyes and you’ll see talent everywhere. The Kenyan rapper brings colour and true upliftment by giving back to his own roots.

To all the people giving money to churches in Africa, make sure they’re delivering,” says rapper Octopizzo to a packed crowd at Rich Mix, London. “Because the pastors are driving Range Rovers, and the people are still poor.”

Octopizzo is an immaculately dressed rapper, entrepreneur and actor with his own clothing brand, but one major detail separates him from other hip hop moguls: he’s from Kibera, Africa’s largest slum. Over the course of three albums, he’s used his platform to build youth projects in Kibera and in refugee camps across Kenya. Rapping in English and Swahili, he playfully pokes fun at corrupt government officials and the dysfunctional foreign aid system, alike.

Kibera was once a forest on the western edge of Kenya’s capital, Nairobi. It was first settled around 1904 by Nubian former soldiers from Sudan but ballooned as Kenyans seeking work flocked to Nairobi. The area suffers from poverty, overcrowding, unemployment, HIV/AIDS and lack of access to education, clean water or proper sanitation. But that’s not the only story. “It’s a good place to be raised,” Octopizzo explains. “It makes you grow up, if you take it positively. But if you look at it another way… the air, the food – shit is fucked up, man.” 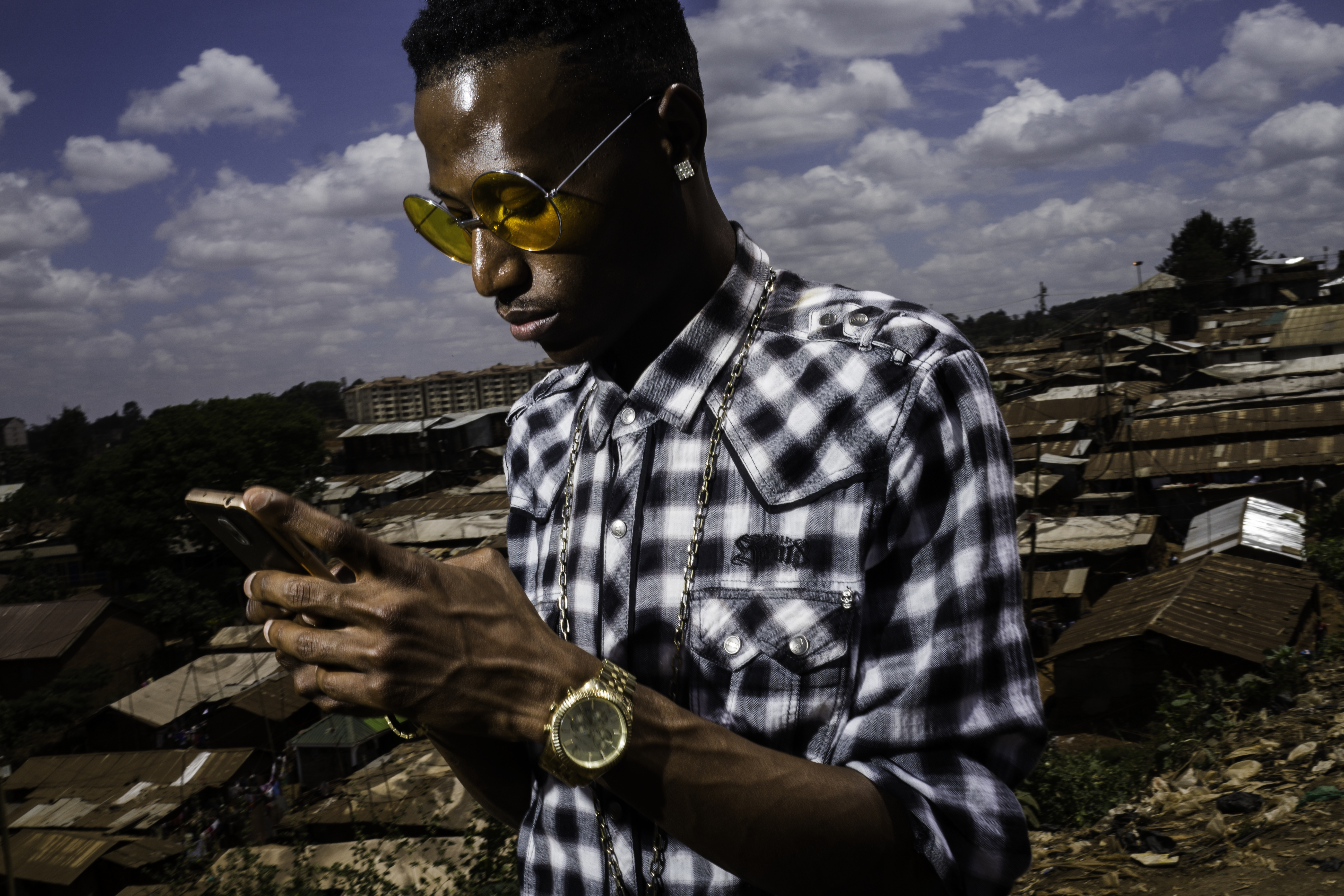 Octopizzo found his calling in 2006, when he discovered a British Council-run project in Nairobi. Once a month, it opened its doors to young people to skate, rap, do graffiti and make music. “I thought this was the time to do something positive about Kibera,” he explains. “People just think, ‘You’re poor, you’ll rob us, diseases, etc.’ You can Google and see all that, you don’t need to rap about it. So I started rapping about what is cool in the slums: slum fashion, slum food and being proud of the things we have that aren’t in the desirable suburbs. Hip hop gave me the freedom to say whatever I wanted.”

Each month, the group who walked 14km to the British Council project began to grow and soon thirty local guys were rapping together. To capitalise on this energy, Octopizzo founded Y.G.B. (Young Gifted and Black) in a small house in Kibera. “I didn’t know what to do, but I just hated seeing the guys sitting around doing nothing.” The early set up was basic. They had a small CD player and would sit around telling stories, drawing on the walls, dancing and rap battling. It was only when elders in the community started to take them seriously that Octopizzo realised hip hop’s potential. “With my activism, I reach the young people but also change the perspective of older people who think hip hop is all about drugs and women twerking.” 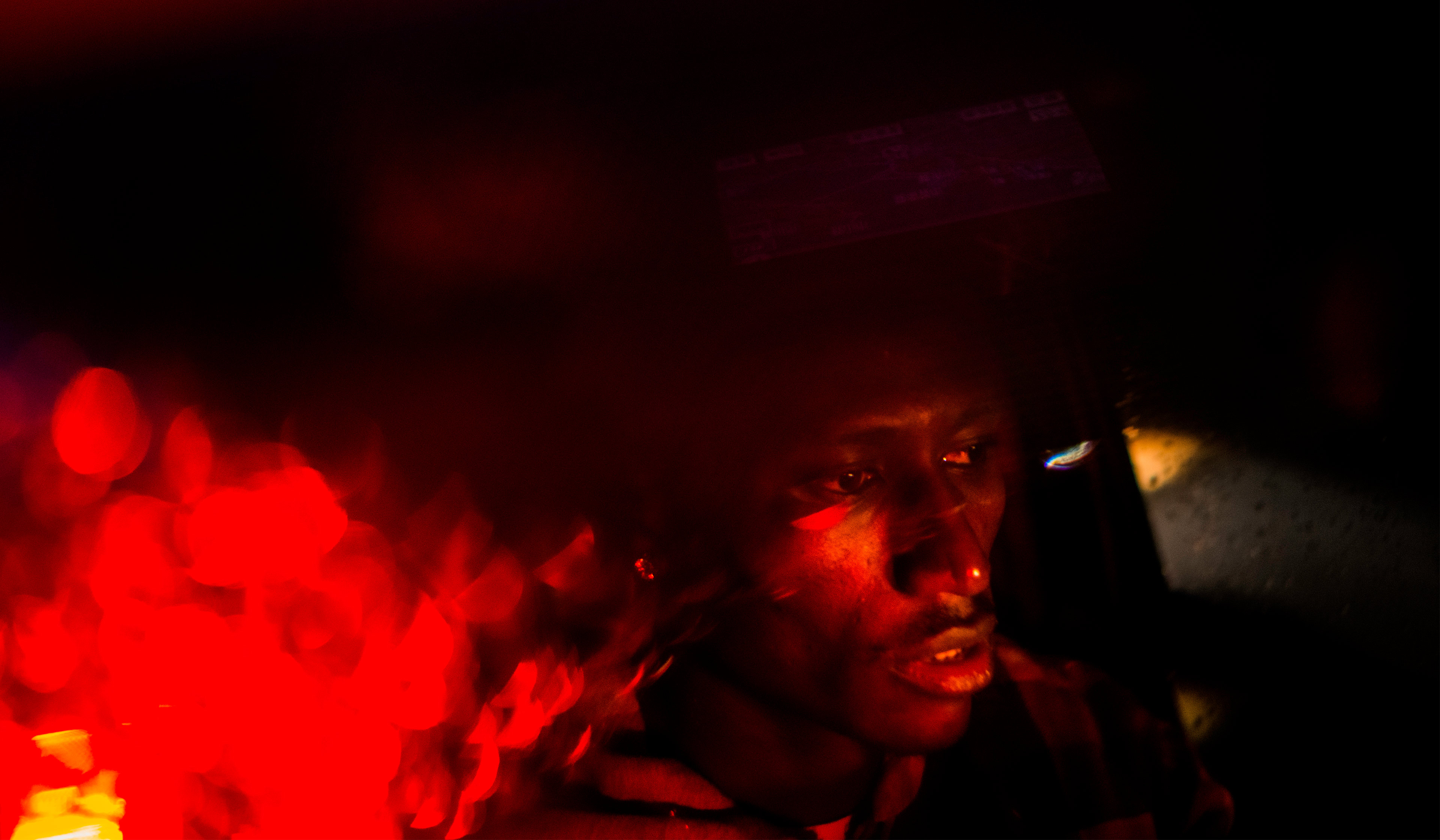 Like any self-respecting rapper these days, Octopizzo is also a CEO. Chocolate City Tours provides a sightseeing opportunity like no other. “We will take you two kilometres deep inside Kibera, where many don’t go because they’re scared,” he explains. “And I hire the bad guys, the guys who rob guys, to be security. I can’t just tell these guys to stop robbing people, but it’s like a mind game: I make them see they can use their bad-guy rep positively. You can be a security guard and earn some money, you don’t need to rob people.” Alongside supporting local people, the Chocolate City itinerary reveals the positive side of Kibera: community organisations, women’s groups and youth projects. “You come out knowing it’s not just about poverty – these guys are trying.”

Octopizzo’s community-led approach to activism is inspired by experiencing firsthand what novelist Teju Cole calls the ‘White Saviour Industrial Complex.’ “People don’t trust NGOs any more, they don’t do shit,” he explains. “In Kibera we have probably a thousand NGOs and the place is the same. They come, get a few people together, do a project and get rich. They take photos, publish a nice article and the world thinks, ‘Oh, these guys are doing really good.’ But nothing is happening, so the trust is dead.” He’s also not afraid to call shit on patronising NGO campaigns: “[When I travel] I watch TV and all I see is these dying babies, ‘Send two euros to Africa!’ And I’m like, no man. I don’t like that picture of Africa.” 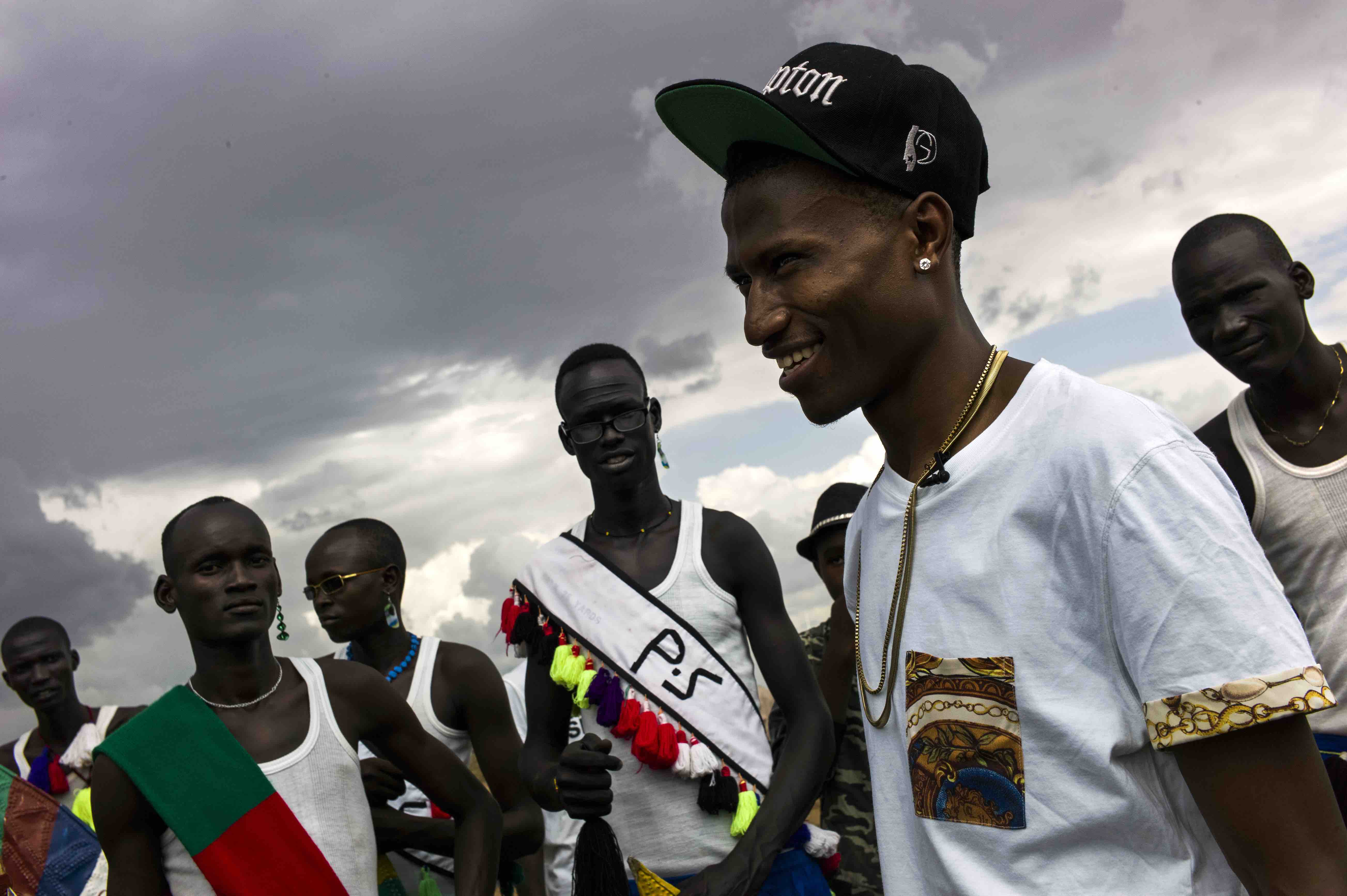 Since the early ’90s, Kenya has been home to two major refugee camps, Kakuma and Dadaab, which host hundreds of thousands of people from Somalia, DR Congo, Rwanda, South Sudan and elsewhere. On World Refugee Day in 2013, the UNHCR – the United Nation’s refugee agency – invited Octopizzo to play the first of many gigs in camps across the country. “It’s just like another Kibera, that’s why when I go there I can relate,” he explains. Seeing how international aid agencies were failing young people, he founded a number of creative mentoring projects in the camps and invited a group of young artists to play at the launch of his second album in Nairobi. “The UN are giving food and tents, which is good, but they’re making them dependent. These are young people,” he says. “They’ve eaten, now where do they take their energy?”

Octopizzo became a UNHCR youth ambassador, but has resisted any formal job offers. “I’m like no, let’s partner, because when you do something wrong, I want to be able to say so. When you’re UN staff, government or working for a big aid agency, there are things you can’t say. Being independent and an artist helps, because I’m able to say anything.”

Today, as a family man and father of two, Octopizzo has huge ambitions, and he isn’t waiting around for international agencies to take the lead. He’s working on a five-year plan for his foundation, building in local expertise. So, does he see himself as a rapper or activist first? “If I stop rapping, people won’t work with me any more,” he explains. “The UN would never listen to me if I was some random Kibera guy saying, ‘Yo, I want to work with the youth.’ I tried that before I was big, and people were like, ‘Hey, we don’t know you man.’ All of this is connected to music.”

Find out more about the Octopizzo Foundation.

Linkedin
RELATED ARTICLES
OTHER ARTICLES
Over the weekend, London locals came together to resist a pre-planned police raid targeting delivery drivers.
The government is scrapping the Human Rights Act in a move that will hit marginalised people hardest.
Photographer Robin Graubard’s debut book offers an unflinching record of turbulence and change across the Balkans.
A new documentary explores the government’s efforts to quash the protest movements of the late ‘60s by any means necessary.
In the latest OFFF Dispatch, the enigmatic designer dives into his process, connecting the dots between his unique and varied creative output.
Our new magazine is here, starring the inimitable Mitski. Order your copy now and join us on a trip around the world.