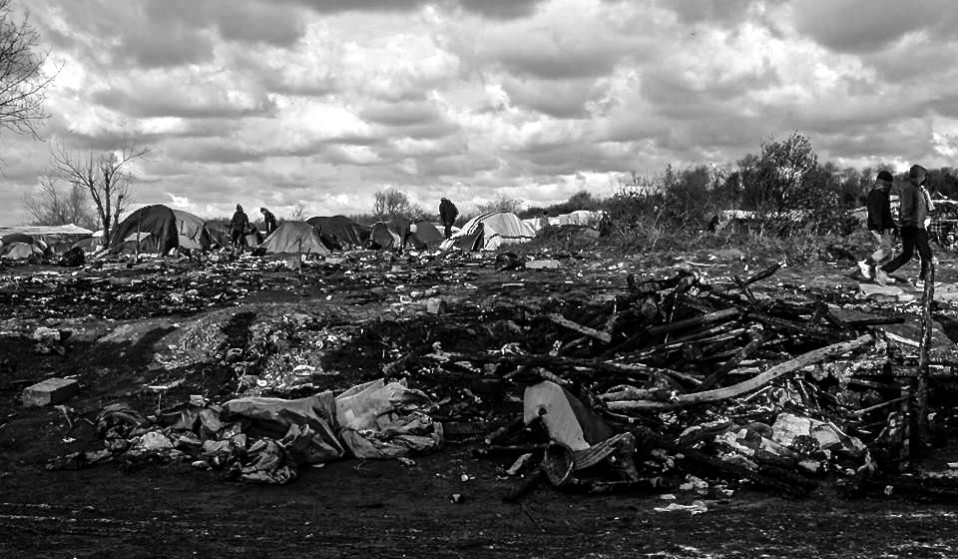 Humanitarian concerns have taken a backseat while France, the UK and their allies wage war on ISIS in Syria. For migrants in the Calais Jungle camp, this means a long, tough winter.

Humanitarian concerns have taken a backseat while France, the UK and their allies wage war on ISIS in Syria. For migrants in the Calais Jungle camp, this means a long, tough winter.

A French flag waves in the wind. It’s attached to a makeshift tent in one of the Iraqi sectors of the Calais Jungle migrant camp. The fifty-year old Iraqi man who brought the flag tells me he spent fourteen euros on it. The day after the attacks unfolded in Paris, his community observed a minute of silence for the 130 people who lost their lives at the hands of terrorists.

Many people like him have left Iraq in order to flee the same persecution that hit Paris on Friday November 13 – what Obama described, in the case of France, as an attack against the civilised world. He seems hopeful that France will offer him and his family a chance for survival. Yet, this seems less and less promising as Europe rapidly turns its back on refugees.

This month saw a drastic drop in temperatures and sporadic fires worsen the living conditions of the 6,000 refugees living in the Calais jungle. But the Paris attacks – combined with a lack of political resolve in Europe regarding the refugee crisis – mean that the humanitarian crisis is forced to take a backseat while France and its allies wage war in Syria against ISIS.

Since the Paris attacks, president Francois Hollande has declared a nationwide state of emergency in France. This not only means a major tightening of security measures at the borders and in public spaces, it also gives the police the power to search homes without a warrant and to ban protests, an infringement on individual rights. Yesterday, this saw hundreds detained and sprayed with tear gas when Parisians protested for their voices to be heard at the UN climate change summit COP21. They chanted: “state of emergency is a state of police”.

The new atmosphere has also led to tougher measures for the refugees trying to gain asylum and for volunteers who are trying to help them. One volunteer in Calais told me that since the Paris attacks, “the French border control in Dover has gone from quite literally non-existent to refusing people entry.”

A very small object has galvanised the rapidly growing distrust of refugees in Europe: the Syrian passport that was left near one of the suicide bombers at the Stade de France where some of the attacks unfolded. The media has upheld this as evidence that the refugee crisis is a welcome invitation for more terrorists to reach Europe – a concern voiced by French Prime Minister Manuel Valls when he called for tighter security at the Schengen area’s external borders. Yet, it has since been established that the Paris attackers were identified as home-grown French and Belgian nationals – disproving the claims that one of the terrorists was Syrian.

This narrative has entered public discourse in the UK. The Daily Mail published a cartoon last week likening the refugees fleeing to Europe to armed terrorists and rats – which has echoes of Nazi anti-Jewish propaganda. Meanwhile, home secretary Teresa May has issued a statement declaring that refugees claiming asylum in the UK would now be screened twice before entering the UK: first in the camps, and then at the frontier where the Home Office would take more biometrics and conduct interviews. 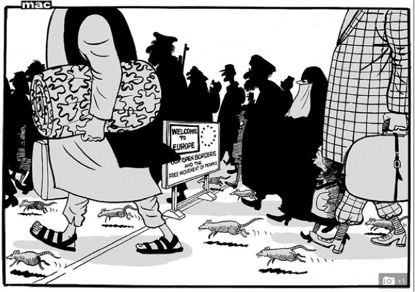 Cartoon from The Daily Mail

These extra precautions come at a time when refugees are facing harsher living conditions because of the winter. On my visit to the Calais jungle in late November, the temperatures had dropped to five degrees and the strong wind was uprooting the makeshift tents and shelters from the ground. Lacking wood or other fuel, the refugees had resorted to burning plastic to keep warm, meaning that the air was highly toxic.

As winter makes its harsh presence felt, more and more volunteers on the ground have raised concerns: reporting growing cases of illnesses in the camp and higher possibilities of deaths by the Christmas period. A recent report by Channel Four revealed asbestos littering the camp, increasing the risk of cancer and other respiratory illnesses.

Months of pressure and hundreds of deaths in the Mediterranean had finally awoken Europe’s conscience, but the Paris attacks have tarnished the narrative of the refugee crisis, making much needed humanitarian intervention in Calais and other refugee camps across Europe less likely. Slowly but surely, a wall is being erected between Europe and those running away from war and poverty. Two days ago, the EU bargained a deal with Turkey in order to stop the flow of refugees coming every day through Greece. From now on, Turkey is to increase patrols in the Aegean Sea and on the land borders with Greece and Bulgaria, just as France and its allies are causing more deaths and refugees by bombing northern Syria and Iraq. Never before has the image of a fortress Europe become so palpable.

Based in the UK and want to help? A good place to start is by joining the Calais – People to people solidarity from the UK on Facebook. On this page, you have access to local donation centres across the UK, lists of specific items needed by local volunteers and fundraising pages to contribute to by volunteer groups. If you want to help with distributions, you can contact local volunteer groups to sort out donations or aid in the camps. Meanwhile, it’s a great initiative to start thinking about specific donations for the winter period: hob cookers, fire safety equipment, warm waterproof coats, shoes and hats.

Linkedin
RELATED ARTICLES
OTHER ARTICLES
Photographer David Hoffman recalls documenting the extreme wealth inequality around Tower Hamlets and Hackney int the 1980s.
In the wake of the decision by the supreme court to overturn Roe v Wade, thousands of protestors filled the streets to express their rage and anguish.
Photographer Matthew Brookes recalls following a group of young people in Venice Beach living in search of the perfect wave.
A new edition of a seminal book brings together iconic images of the band onstage in their full glory and backstage in moments of unguarded camaraderie.
Proposals to introduce a minimum GCSE threshold for student loans will disproportionately affect those from marginalised backgrounds.
The last few years have seen an increase in LGBTQ-led initiatives to feed the hungry, with many finding ways to stay afloat despite the challenges.