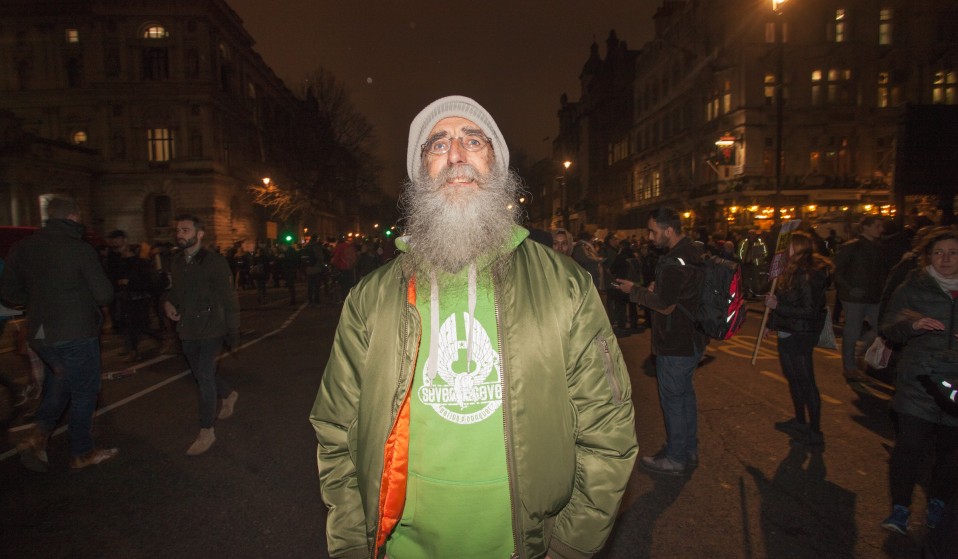 The older demographic might have voted for Brexit, and more than half ticked the box for Trump, but there are still plenty of over-50's fighting fascism.

The older demographic might have voted for Brexit, and more than half ticked the box for Trump, but there are still plenty of over-50's fighting fascism.

We’re often told that the world is divided: the young, progressive and open-minded locked in a never ending battle with the more conservative generation before. And in some ways it’s true. Brits aged 18-44 voted by a large majority to remain in the EU, in the United States the same demographic very much voted for Trump.

But that’s not to say there aren’t plenty of people from every age bracket who are outraged, angered and terrified about the rise of the far-right. If there’s to be any seriously successful resistance to Trump’s presidency, and similar regressive turns across the globe, we’ll need to work hard to build bridges not walls over these divides.

At last night’s anti-Trump protests in central London, people of all ages were present in the crowd, and we caught up with some of the older participants to see what they were thinking. 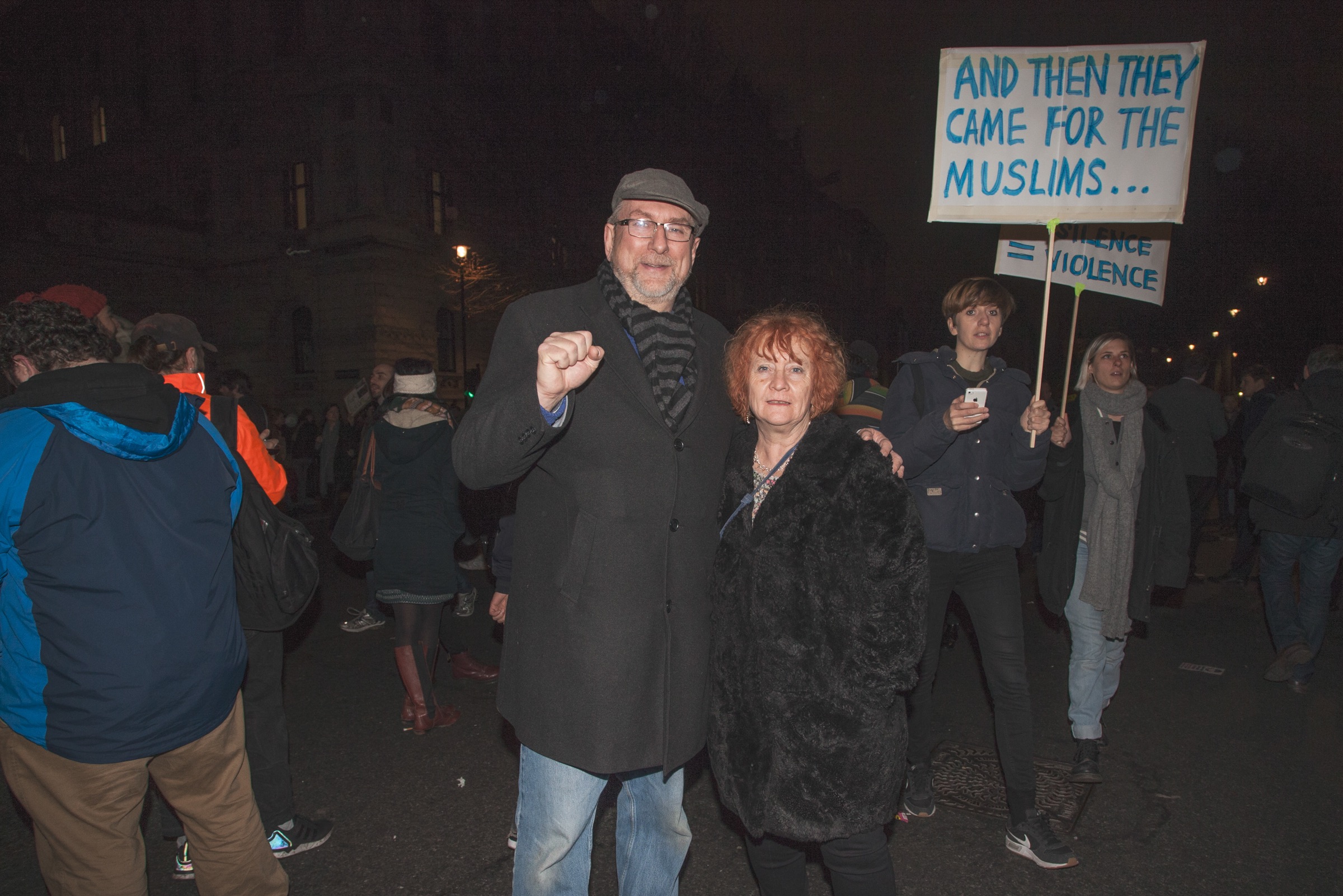 Why are you here today?
Greg: Well we saw it on social media yesterday, on Facebook.

Gillian: We were so appalled by the decision to shut the border in America to so many countries.

Greg: It’s just time to be here… And also, we’re retired now so we can go on lots of demos. I’m filling up my diary here with various marches coming up.

Do you agree with anything that Trump has done since taking office?
Greg: No, by definition, not, no. I can’t think of anything I could possibly agree with.

What with Brexit and Theresa May inviting Trump over, do you worry the UK government might do something similar?
Greg: Well I think it’s a possibility because of Brexit for sure, and because I’m afraid there are a large number of people in this country who seem to want it. 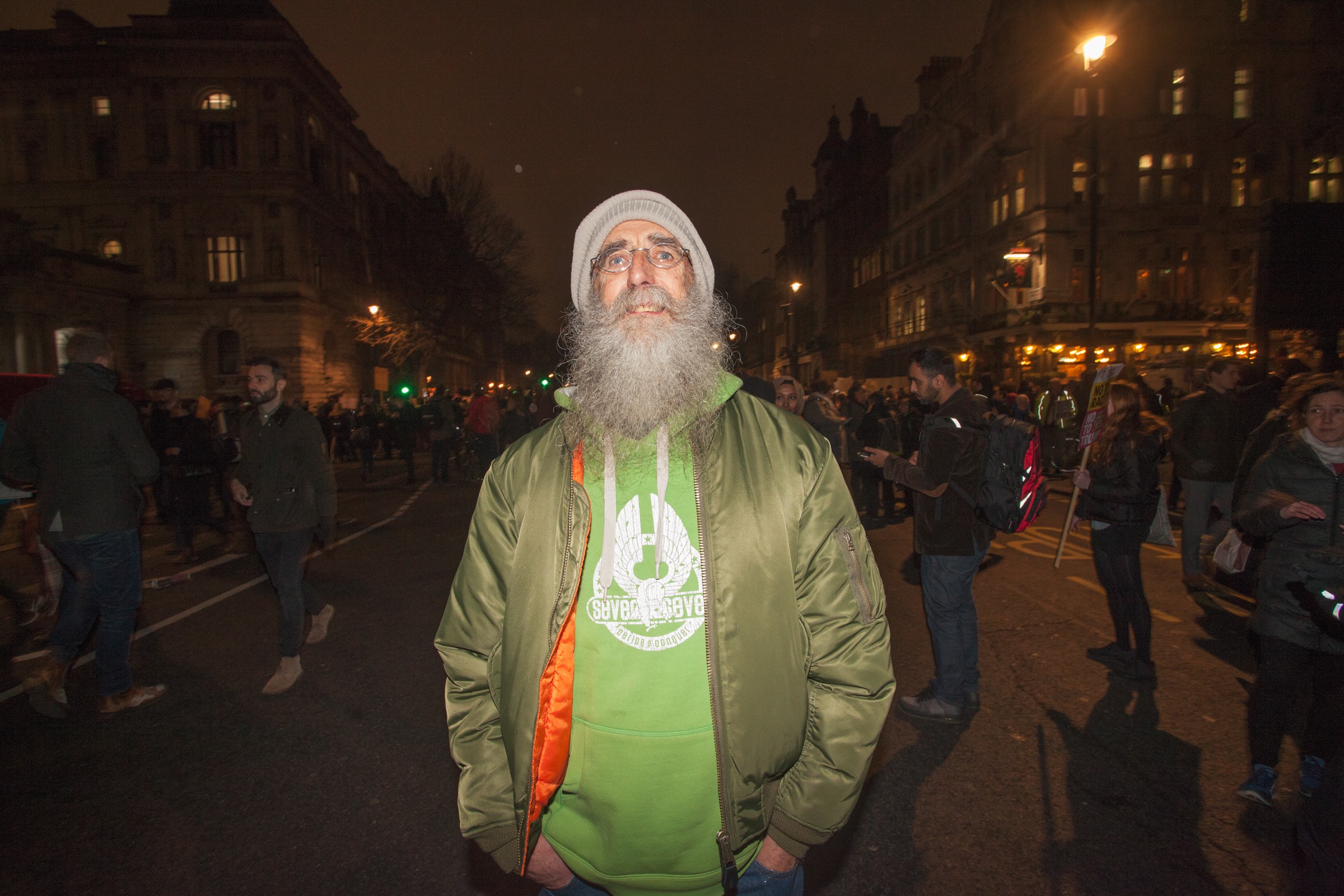 Why are you here, Roy?
Because as a Quaker and a member of the Green Party I reckon Trump and May between them represent all that is evil.

Okay, I think I know the answer to this one, but do you agree with anything Donald Trump has done since taking office?
No.

Do you think the UK should take a similar stance on who it lets in to the country?
No. On the other hand I don’t know who all these people shouting “refugees welcome”, they’re probably doing nothing themselves to welcome refugees. It’s easy to shout but actually doing something yourself, letting out your spare room, is more difficult. 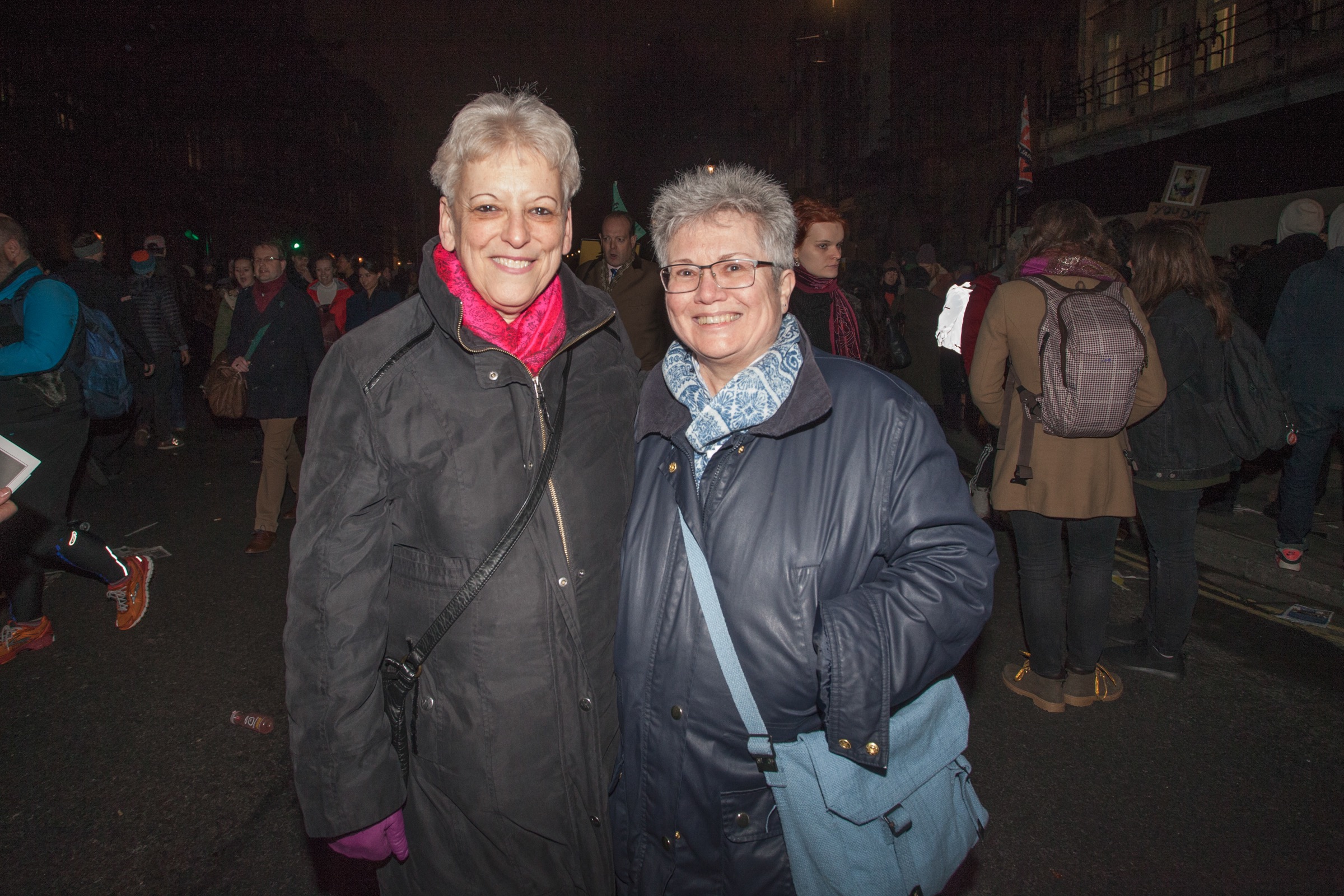 Hello Michal and Judy!
Judy: So you just want to ask some oldies some questions for young people to read?

It’s always nice to get a diverse range of opinions. So, Why are you here today?
Judy: Because we are very anti-Trump, generally.

Michal: Well, that’s for you to say Judy. For me it’s because I really feel that I need to make a stand against Trump’s ideas about refugees. It’s very important for me.

And to many of people, it seems…

Michal: I’ve never seen so many protests around the world, when a leader of the free world has come to power. I’m 65, I’ve been around for a while and I’ve never seen anything like this.

Could we see something similar happen here?
Michal: I come from a Jewish family and I know from personal experience that it’s happened in a very civilised country, as you know, in Germany. So you can never say no, things can happen, but I really do hope that we have moved on. Being here today tells us that there is hope. Look at the amount of people here on a Monday evening! 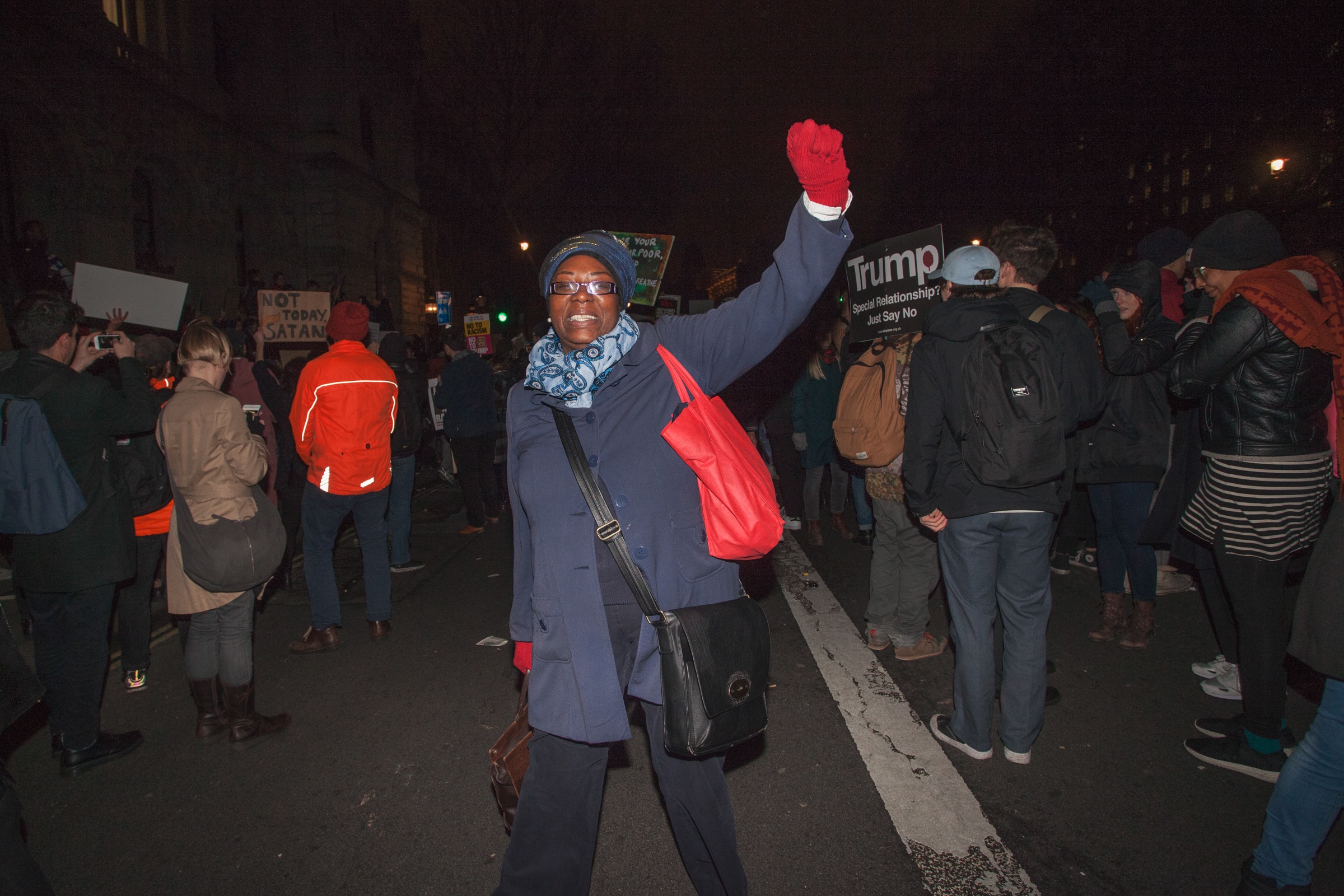 Why are you here today?
Well, I mean you have to take a stand, haven’t you?

I’m the one asking the questions, Hazel. A stand against what?
I mean, you know, what can I say? I mean, the politics dictating the world right now are just ridiculous, and we have to take a stand because it’s Muslims today, who else tomorrow? So it’s really a good turnout, I’m really really impressed. It’s fantastic.

Are you scared that similar restrictions on who can come to the UK might be imposed?
Of course, and it’s happening. It’s not just about refugees, it’s about immigrants, it’s very racist, very right-wing and it’s insidious as well. People have got to wake up, because these policies are coming in and they’re creeping in by stealth and if people don’t take a stand and wake up, god knows where it’s going to lead us to.

That’s very true.
So I’m here in the cold, but it’s worth it. 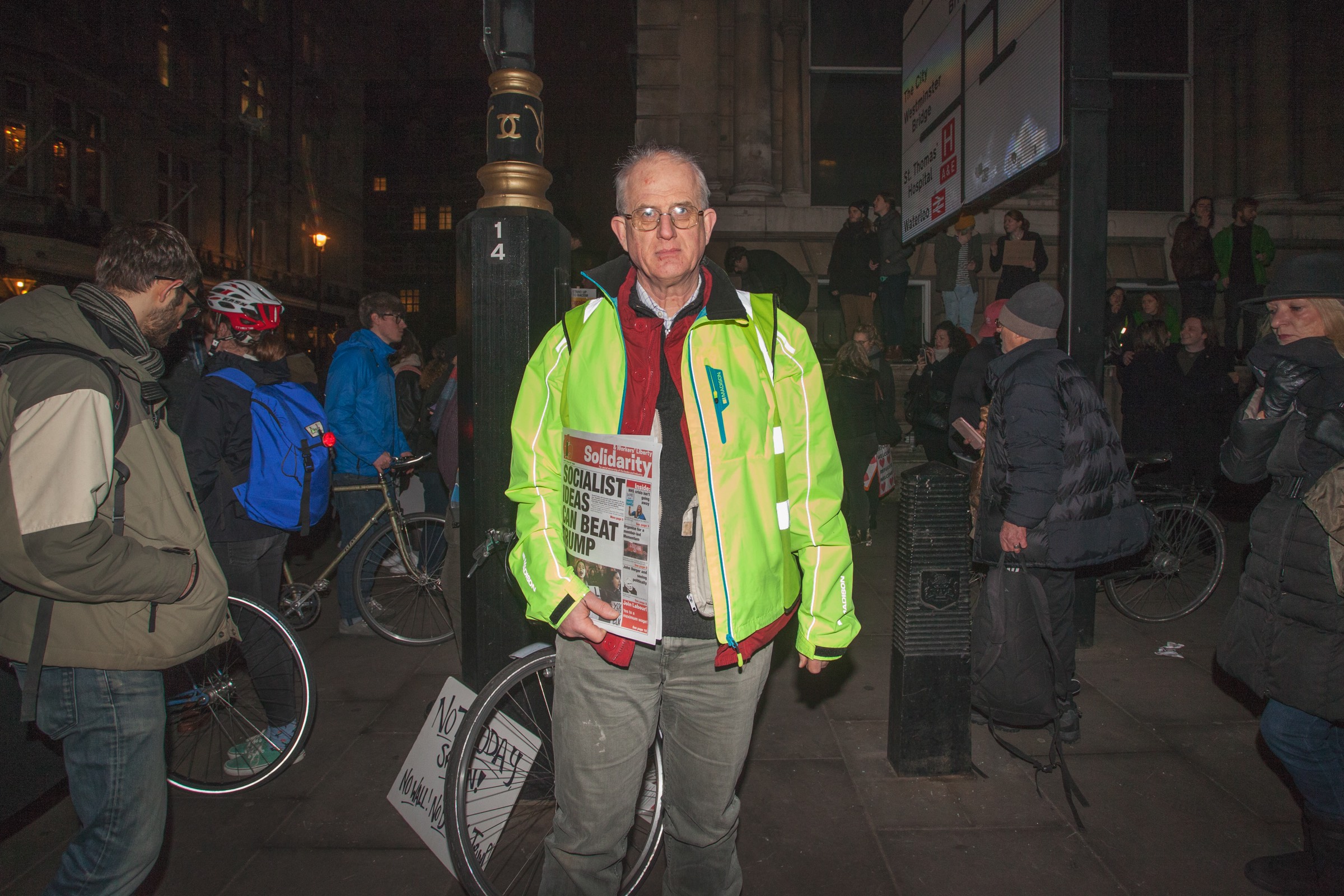 Why are you here today?
Because I think its really important to show maximum protest at Trump’s discriminatory, racist decision on the immigration ban and actually his policies in general.

Do you agree with anything trump has done since taking office?
No.

Linkedin
RELATED ARTICLES
OTHER ARTICLES
Steel City is often overlooked when it comes to the country's cultural radar despite its role in shaping electronic music.
Photographer Bud Glick recounts documenting everyday life in the area, and what it taught him about the Chinese immigrant experience.
Danny Burrows discusses his new series of images documenting an pacifist anabaptist community who lead an alternative way of life.
A young woman recounts her experience of being harassed by anti-choice campaigners as she was seeking an abortion in Glasgow.
With the UK now set to run out of vaccines, people working in the sex industry – particularly outside of major cities – have been left especially vulnerable, reports Brit Dawson.
A 28-year-old from Texas was forced to travel across state lines for an abortion that would save her life and end a pregnancy that her baby had no way of surviving.