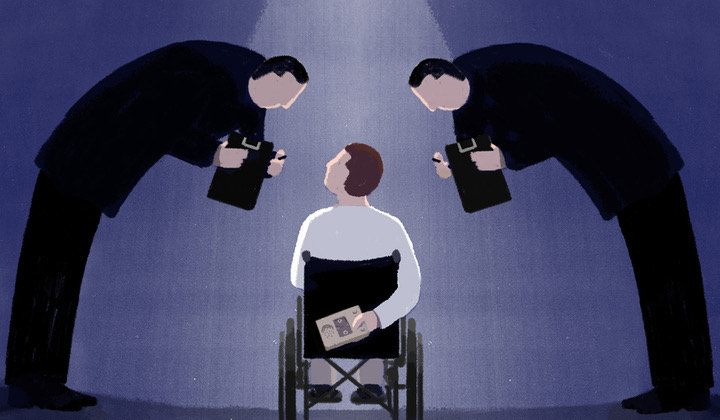 In Britain, a growing number of disabled people are recording their Personal Independent Payment assessments. Emily Reynolds finds out why.

In Britain, a growing number of disabled people are recording their Personal Independent Payment assessments in a bid to ensure transparency. As activists look to fight back, Emily Reynolds explores the modern welfare system’s cruel history.

It’s not that she hadn’t heard how brutal the assessments could be – she had. But her struggles with chronic pain had reached an apex, and her inability to cope with this pain had brought with it a devastating depression that made it hard for her to even leave the house.

She knew she couldn’t work – she’d tried everything, from part-time to home working to freelancing – and was seriously struggling with rent and bills, compounding her distress. She had hoped that an assessor would quickly see what was going on in her life: how couldn’t they?

A few weeks before, Laura had provided moral support to a friend nervous about her own assessment. “The woman was so nice – she seemed like she was really listening to what my friend was saying,” she says. “We’d both been pretty apprehensive going in because we knew what these assessments were like. By the end of it we felt it had gone as well as it possibly could have.”

But when the report came back, categorically denying her friend PIP, Laura was shocked to find an account that in no way matched what she or her friend had experienced.

“The assessor lied, basically,” she says. “Some of what my friend had said was completely omitted, other bits were misrepresented and some of it was just… flat-out untrue.” Laura’s friend later appealed, but unsurprisingly the assessor was taken at her word; there was no recourse, and the appeal failed.

“There was obviously the disappointment of having been denied the help she needed,” Laura says. “On a practical level, that was devastating. But to see your life and experiences recounted on paper in a way that feels so alien to you… there’s something very disorienting about it, to have an officially stamped piece of paper that says you’re wrong or that you’re not telling the truth. You can’t understate how invalidating that is.”

Laura, determined not to see her own experiences used against her, joined a growing number of disabled people recording their assessments. Her inspiration first came from Recovery in the Bin, a user-led activist group with a focus on human rights.

In 2019, Recovery in the Bin teamed up with Disabled People Against the Cuts (DPAC) to offer assessment compliant recording kits for people to record their PIP assessments. Recording the assessments, the groups say, adds transparency: assessment reports have to be more accurate, and if they’re not there’s proof that they weren’t. But recording “reduces the likelihood of getting a bad decision in the first place,” Recovery in the Bin say. In other words: it’s a deterrent.

Mark, who’s in his 40s, also started recording his assessments – an experience he describes as traumatic. “To say it was difficult would be an understatement,” he says. Even filling the forms out was stressful. “It basically took all my energy before I even got in a room with an assessor.”

Before his assessment, he made sure he was diligently prepared, sourcing advice from friends and online contacts, and obsessively reading through official documents to make sure he properly communicated his needs. His claim was still denied.

“After that I thought – sod it, really,” he says. “I knew I’d told the truth and that what I’d said made me eligible. It made no sense.” So when one of the online friends who’d helped him with his application recommended he record his next assessment, he knew it made sense.

“When you’re being assessed you basically have zero power,” Mark says. “And introducing a tape recorder into proceedings isn’t going to change that by much. But for me, I felt it shifted the dial enough to be worth a shot.” Mark’s next claim was successful, which he partly puts down to the recording he made.

Personal independence payments are, supposedly, a way to support those struggling with daily living. The assessments, along with supporting documents and an application form, are intended to measure a person’s mobility and ability to engage in daily tasks, and cover numerous activities: making food, cooking and feeding yourself, washing and bathing, socialising, going to the toilet, handling money and other categories.

Applicants are awarded points for each activity, with a higher score the more difficult they find a task. If you can make a hot meal without any help, for example, you receive zero points; if you can make a meal with someone’s supervision you get four; and if you can’t make a hot meal at all you receive eight points. Those with a score between 8 and 11 across all tasks are awarded the standard rate, with a higher rate given if you score more than 12.

On paper, such an assessment sounds straightforward. But in reality, Personal Independence Payment applications can be deeply traumatic and are more often than not rejected. One 2017 investigation from Disability News Service found that nearly half (45 per cent) of PIP claimants who had a “planned review” of their eligibility in 2016 saw it cut (20 per cent) or lost entirely (25 per cent).

Two years later, in 2019, the website also published a large-scale investigation of the Department for Work and Pensions (DWP) more generally, calling for the prosecution of senior civil servants and the two ministers – Iain Duncan Smith and Chris Grayling – responsible for the welfare system during the early days of the coalition government.

The investigation itself was centred around five deaths – of David Barr, Paul Donnachie, Michael O’Sullivan, Mark Wood and a woman known only as ‘Ms De’. “All five of those who died had one crucial thing in common,” wrote journalist John Pring. “They had all been found fit to work.”

In each case, there were a catalogue of failures. Atos, the company contracted by the government to conduct the assessments, distorted information as Laura, Mark and Recovery in the Bin have noted. On top of that, assessors refused to accept crucial supporting information from GPs or psychiatrists, or to ask questions – or hear answers – about mental distress. It’s a process so brutal that many have felt driven to take their own lives.

Even if payment is awarded at the end of the assessment, it’s scant consolation. Alongside around £300 per month from Universal Credit, Laura receives the standard daily living rate of £58.70 a week. The enhanced rate is £87.65. (For those with mobility issues, the standard rate is £23.20 and the enhanced rate £61.20.) “It obviously helps,” she says. “But it’s really not enough.”

For many of those with previous experience, it’s also been difficult to see responses to the welfare system in the light of coronavirus-related redundancies and job losses.

“Disabled people have been making a big noise about how inadequate the amount of money we have to live on is for a long, long time,” Laura says. “To see people say, ‘We can’t live on however much a week’ when we’ve had to do just that for years has been a mixture of infuriating and quite encouraging. Like, ‘Yes! You’re right!’ We can’t live on this much money a week! But also I wish people had listened to us say this years ago.”

“I’m worried that people have lost their jobs or are in ill-health at the moment, I’m worried about the pressure on the welfare system and how that’s going to impact people, but I’m also hopeful that a broader range of people will understand what it is we’ve had to go through when we’ve been living on PIP and going through these assessments,” she says.

As for recording assessments? It’s a fairly easy process. Recovery in the Bin and DPAC have kits available to borrow in Bristol, Cardiff, Derbyshire, Dewsbury, Glasgow, Suffolk, London, Liverpool, Manchester, Norfolk and Sheffield. Or you can make your own, as Mark and Laura did.

“I’m glad there’s more attention being paid to the benefits system at the moment,” Mark concludes. “I have had friends finally say to me that they understand what I’ve gone through now they’re dealing with the stress of having to apply for Universal Credit.”

“I’m not glad that it’s come to this for people to listen.”

The Department of Work and Pensions were approached for comment on issues raised within this piece, but refused unless provided with the addresses and national insurance numbers of those quoted. Huck declined. A DWP spokesperson said: “Huck Magazine has refused to share details of the claimants which means we cannot comment further.”

Linkedin
RELATED ARTICLES
OTHER ARTICLES
Government plans to make it harder for people to go to university will only entrench inequality.
In the last of our dispatches from OFFF Barcelona, Rufus Deuchler and Vincent Gault discuss the future of creative process.
The government is scrapping the Human Rights Act in a move that will hit marginalised people hardest.
The author discusses her blistering new novel about history, revolution and queer love.
The revered showbiz chronicler recalls his journalistic beginnings, documenting subcultural scraps in the ’80s.
In our first OFFF Dispatch piece, the Arce Studio founder shares her tips on standing out from the crowd.