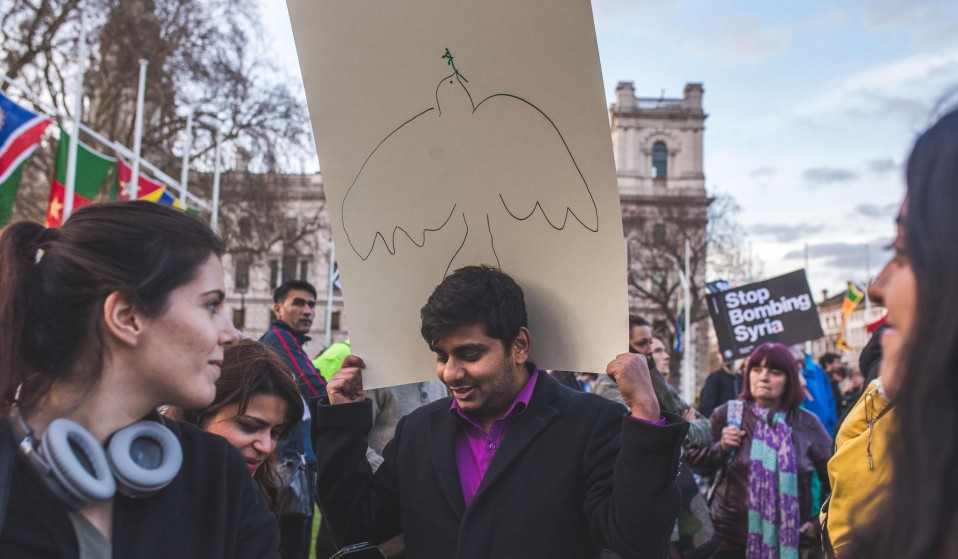 Yesterday, demonstrations against the UK’s shock intervention in Syria were held across the country. Photographer Theo McInnes and writer Ben Smoke join the crowds in London.

Yesterday, demonstrations against the UK’s shock intervention in Syria were held across the country. Photographer Theo McInnes and writer Ben Smoke join the crowds in London.

Yesterday afternoon, up to a thousand people gathered in Parliament Square to demonstrate against airstrikes launched in Syria over the weekend. During Saturday morning’s strike, coordinated between Britain, France and the US, 105 missiles were launched at three targets in what the government has referred to as “an effort to degrade the Syrian regime’s chemical weapons capabilities.”

The action was the first major military intervention made in the Syrian conflict without a vote in Parliament, contrary to Parliamentary convention. In response, Labour leader Jeremy Corbyn has called for a new War Powers Act to codify the convention, a call supported by many on the platform.

Following advice from the Attorney General, Prime Minister Theresa May declared the action “legally and morally right”, though this has been disputed by many, including Corbyn, who referred to the move as “legally questionable.” 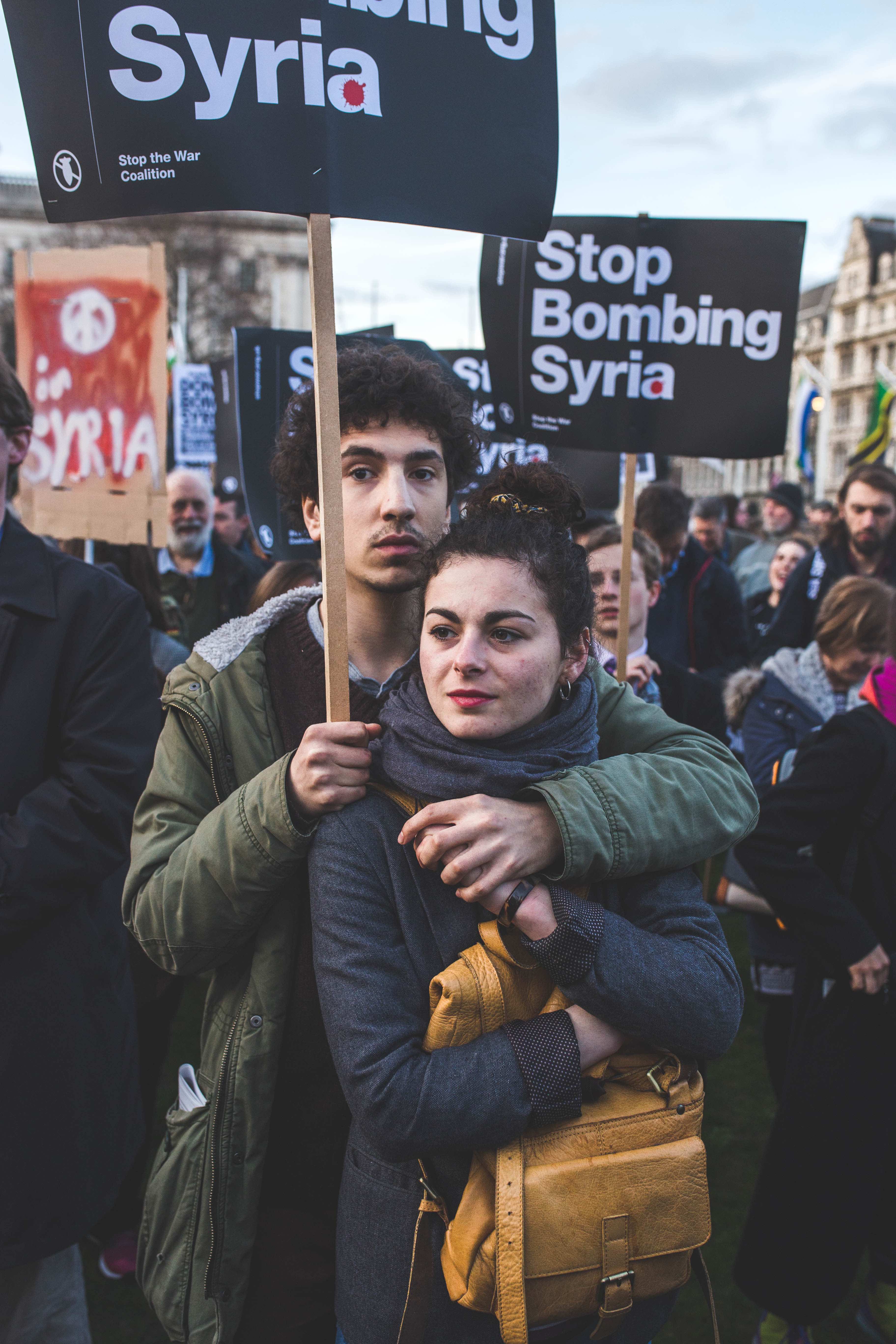 Yesterday’s demonstration was one of 12 organised by the Stop the War Coalition across the country, demanding an end to military intervention in Syria, and echoing demonstrations held in both 2013 and 2015.

During the protest, speakers from political parties, trade unions and anti-war organisations condemned Syrian president Bashar al Assad and the use of chemical weapons, while also denouncing British military intervention in the region – a move they say will only increase tensions and the death toll.

Labour MP Chris Williamson likened the action to the “dodgy dossier”, used by Tony Blair’s government in 2003 to justify the invasion of Iraq. Referring to a parliamentary vote taken in March 2017, comedian Francesca Martinez spoke of the “inhumanity” of the Conservative government voting down a motion mandating councils to provide refuge for child refugees of the conflict, while increasing military action. 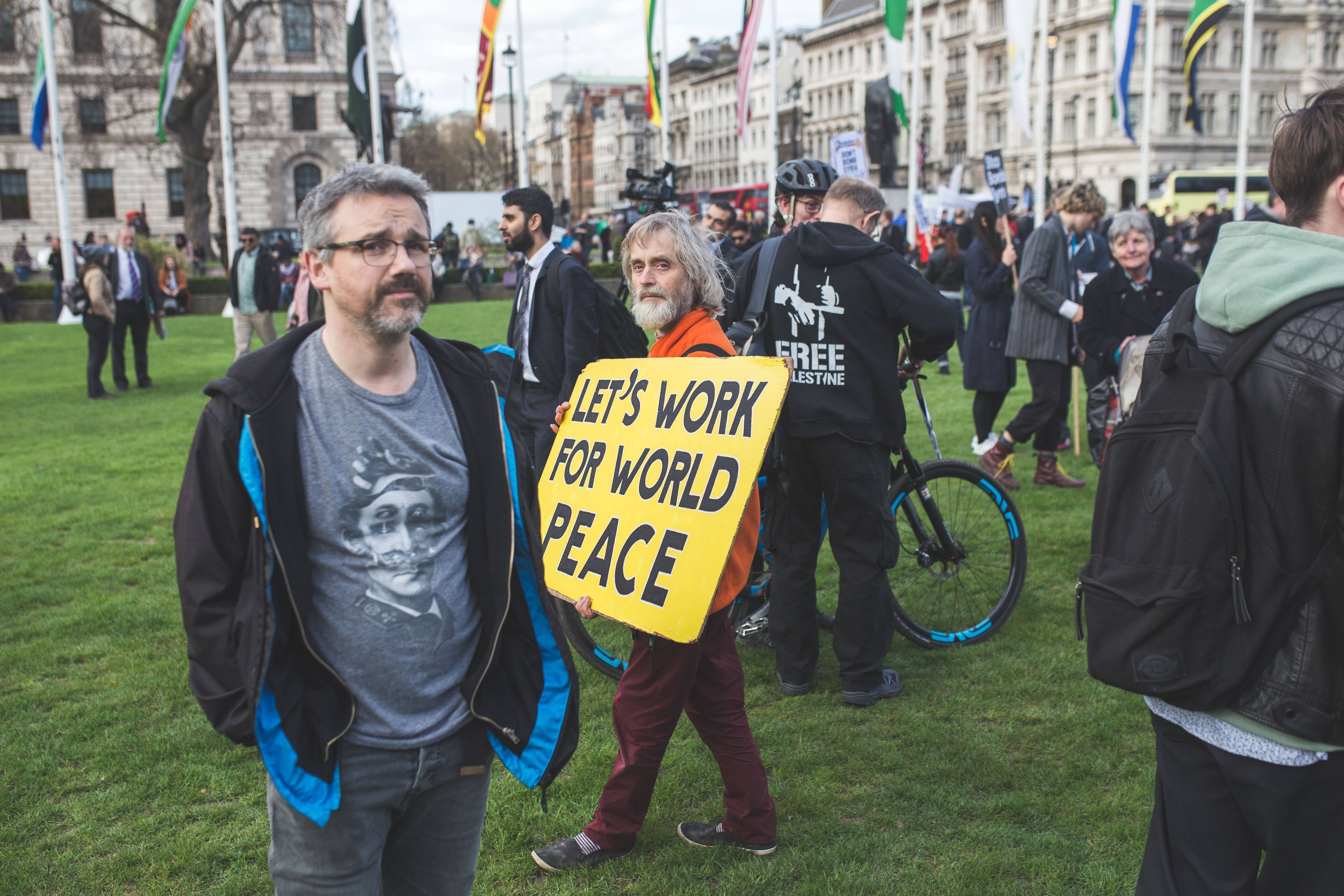 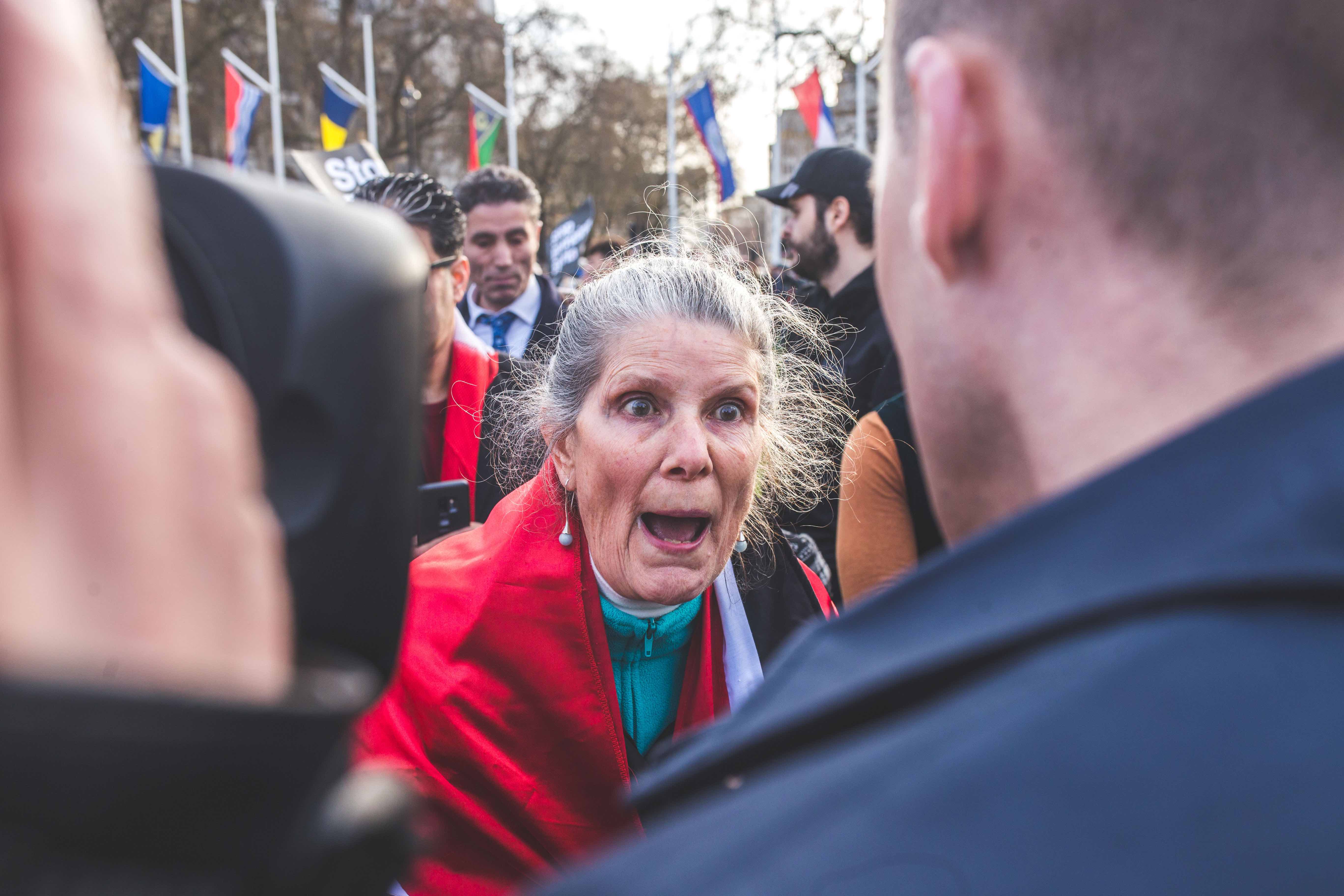 Across the road in the House of Commons, a statement given by May on the intervention lasted three hours, with 140 MPs asking questions. An emergency debate on the action, called by Labour MP Angela McGovern, was tabled directly after. May asserted that the airstrikes were “in the national interest” whilst pledging to use the “full range” of political and economic devices available to enforce the ban on chemical weapons and force Assad back to the negotiating table.

Corbyn referred to the strikes as “reckless”, before again calling for a new War Powers Act stating: “There is no more serious issue than the life and death issue of military intervention. It is right that Parliament has the right to support or stop the government from taking planned action.”

A symbolic vote on the debate followed, with all but one Labour MP abstaining. An emergency debate on parliamentary scrutiny is scheduled for today, whilst a national demonstration against continued intervention in Syria is due to be called by the Stop the War Coalition for this weekend. 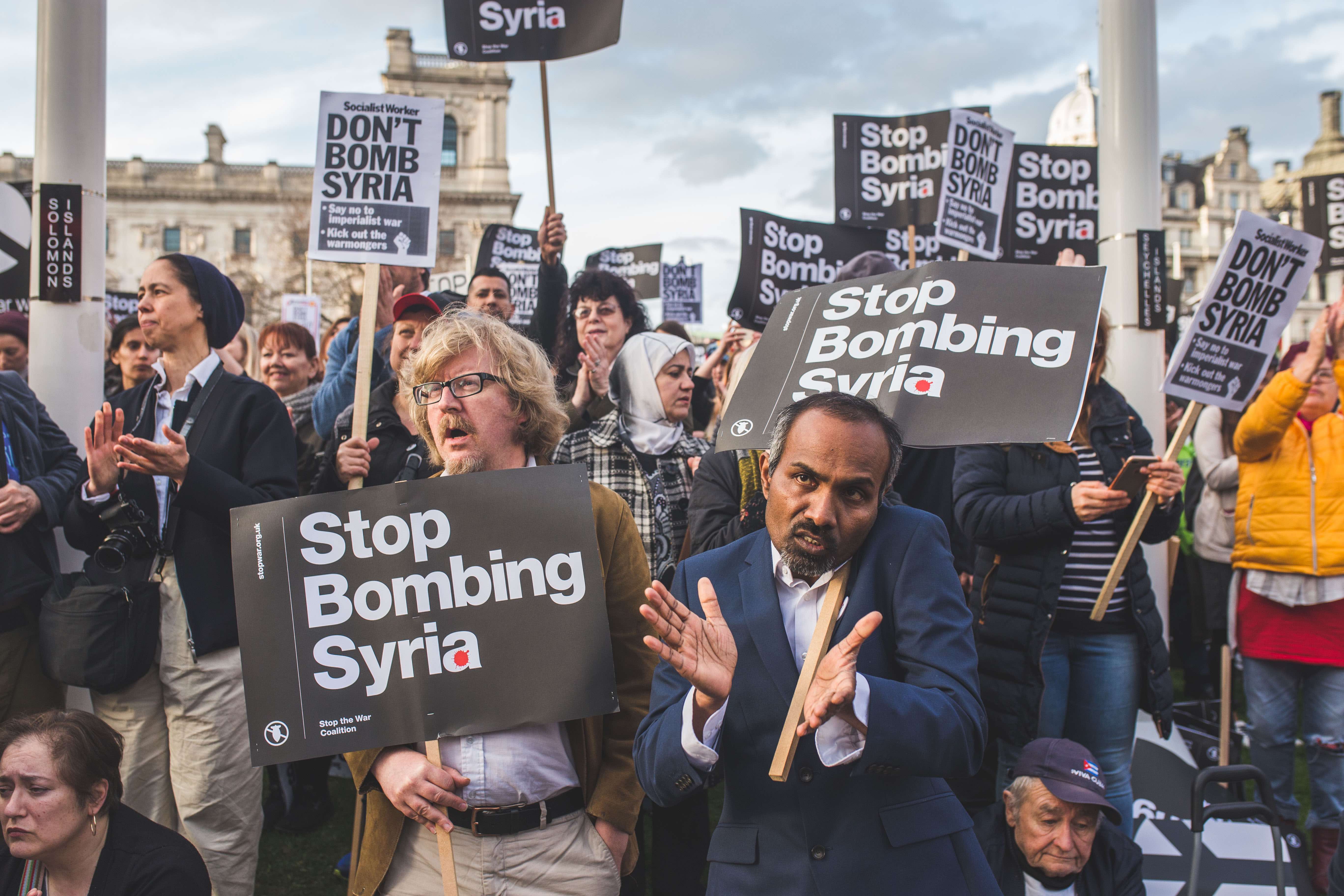 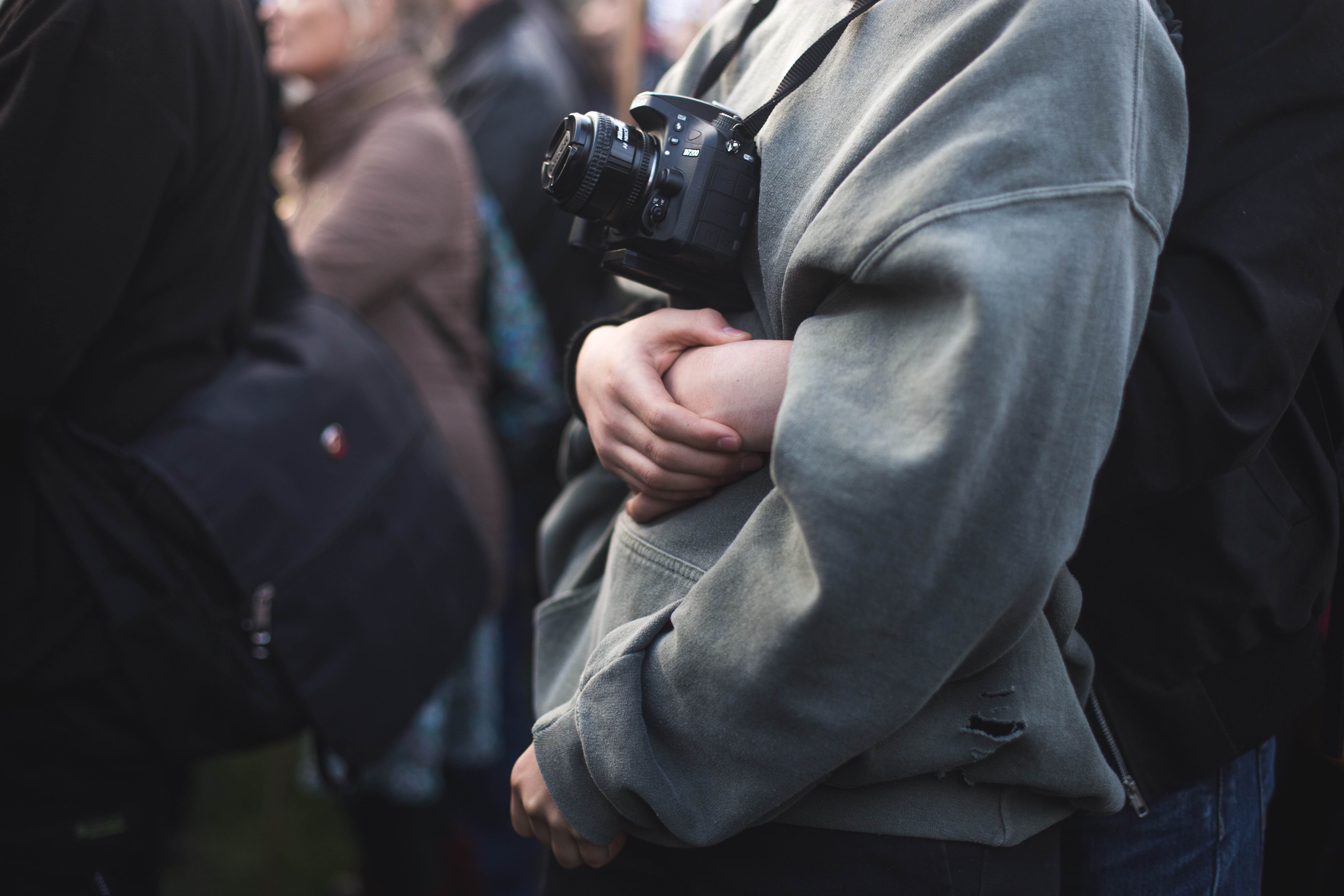 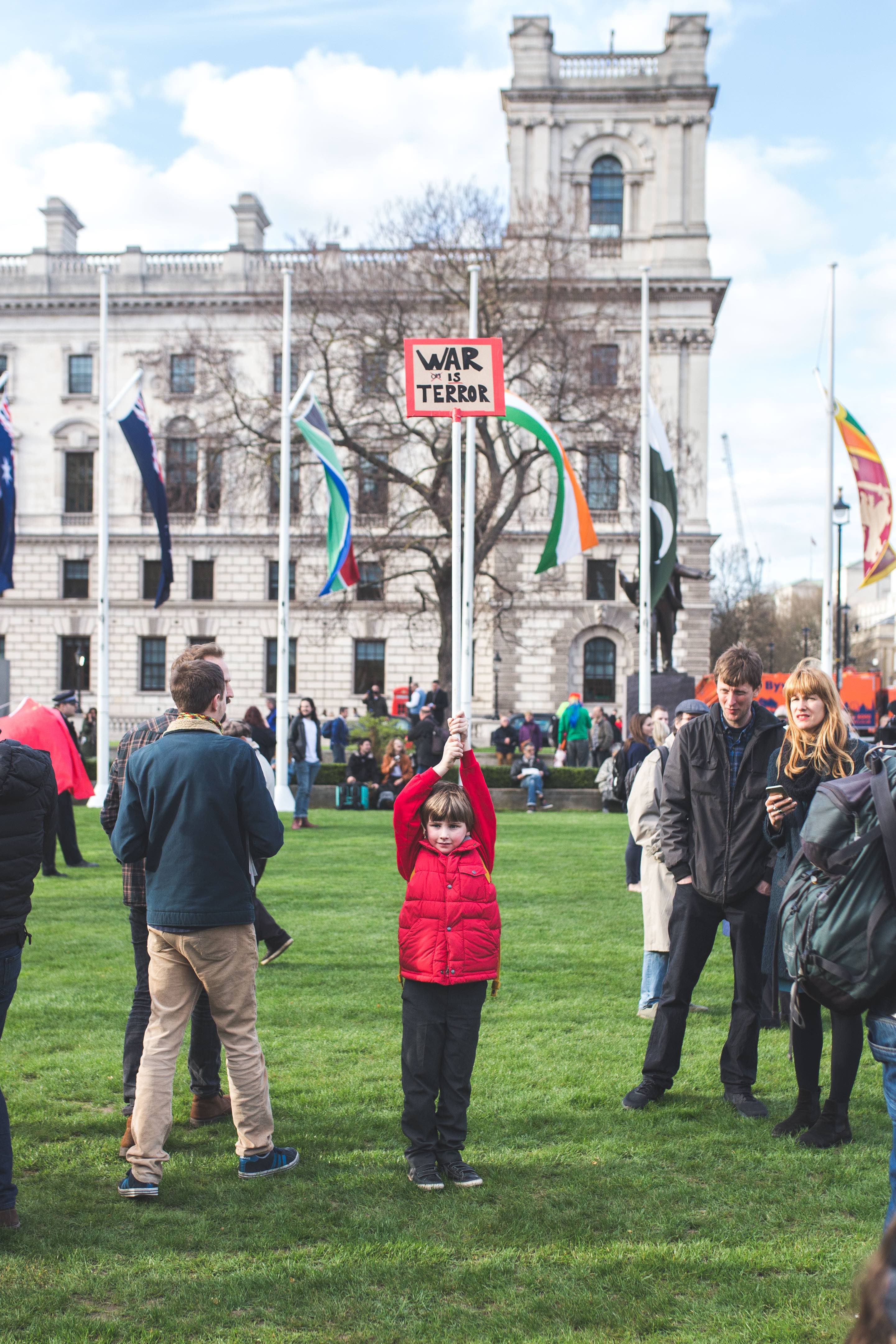 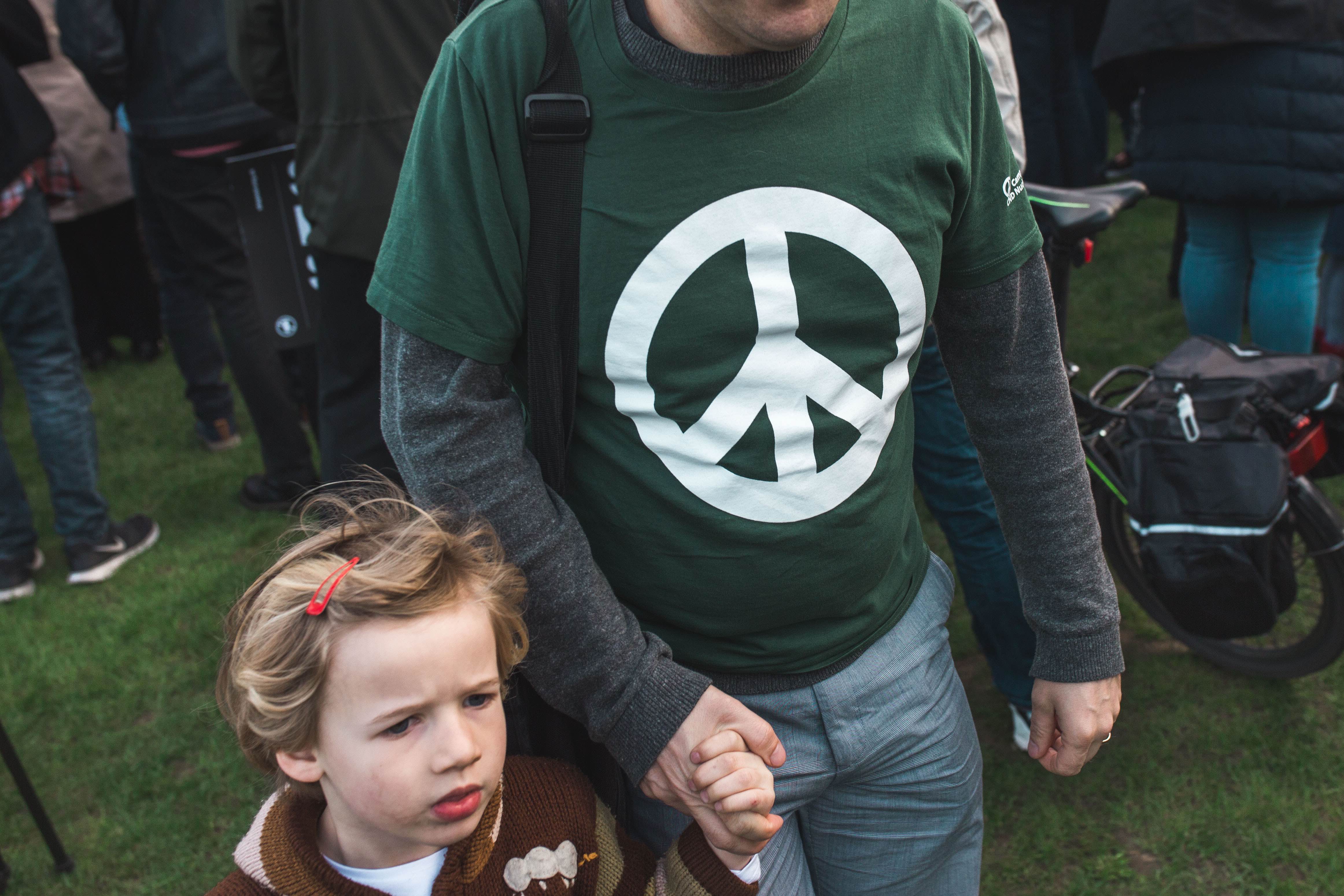 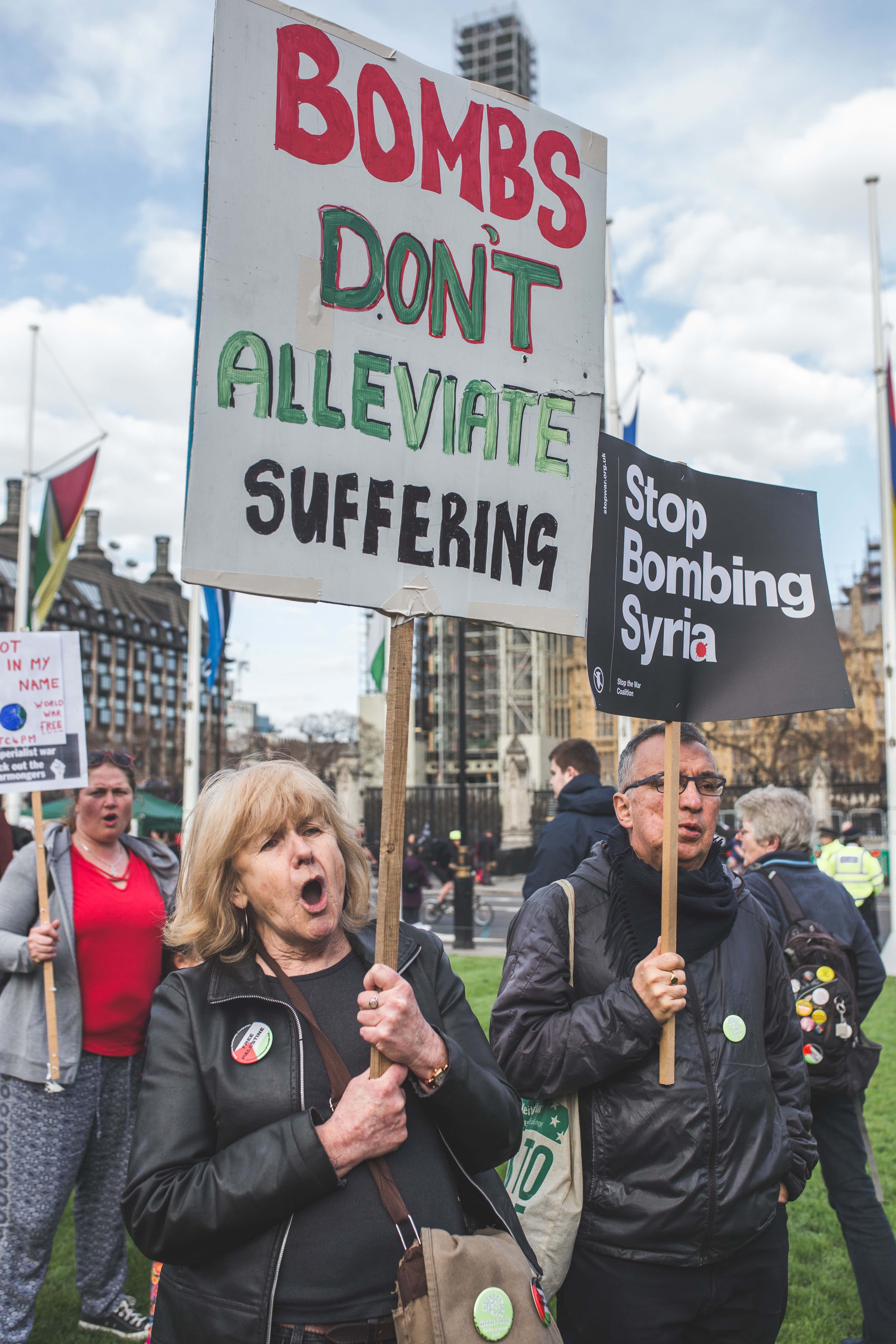 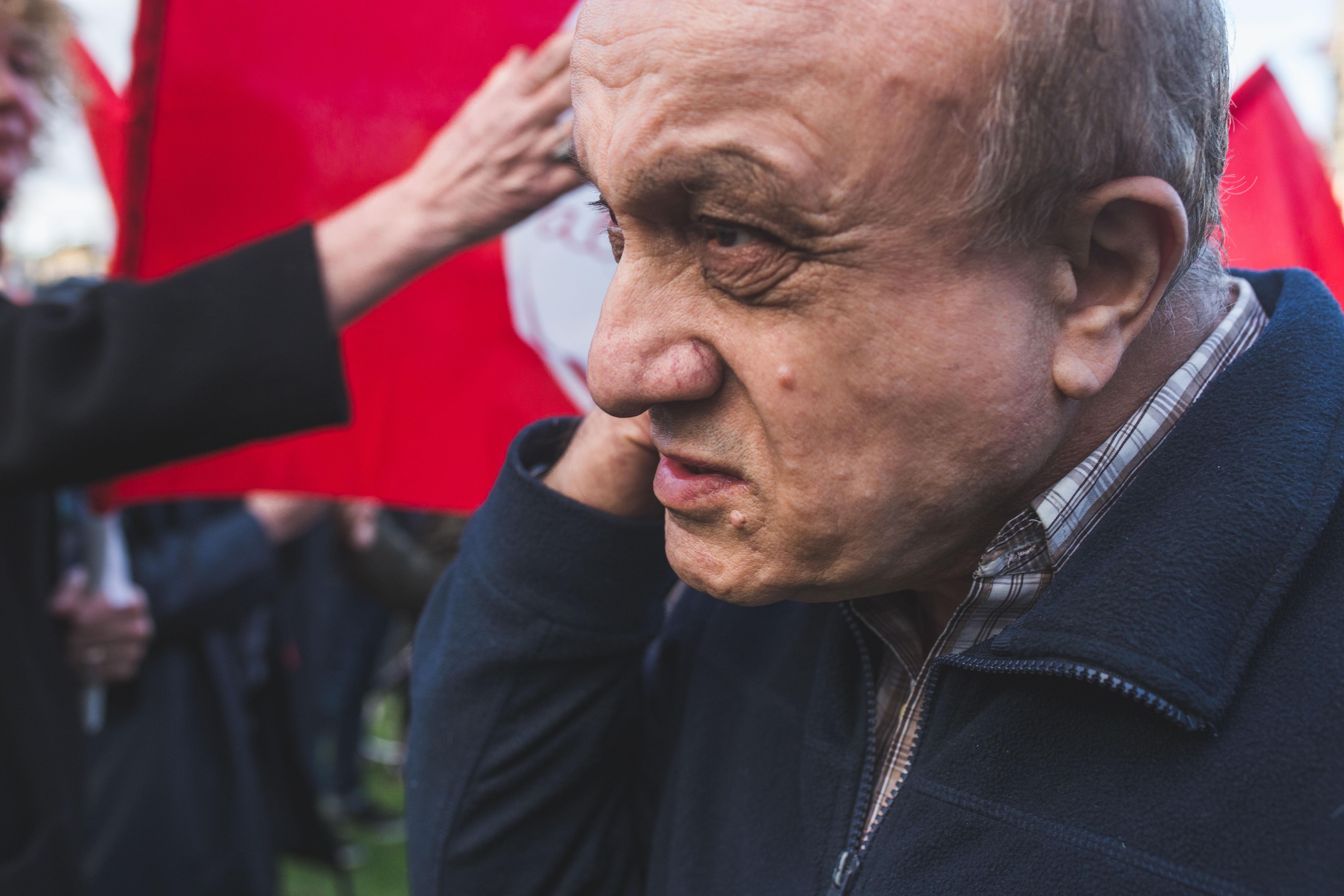 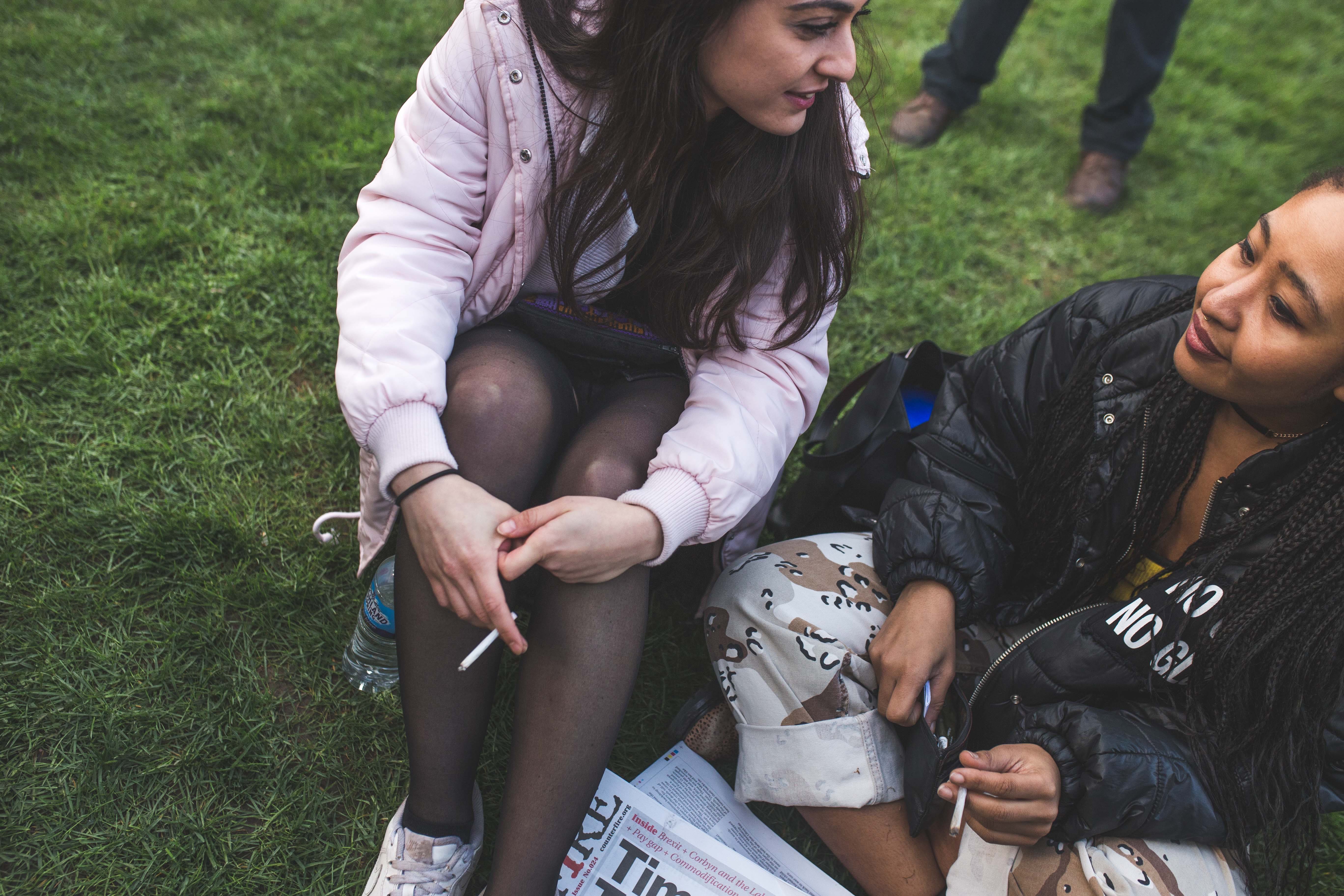 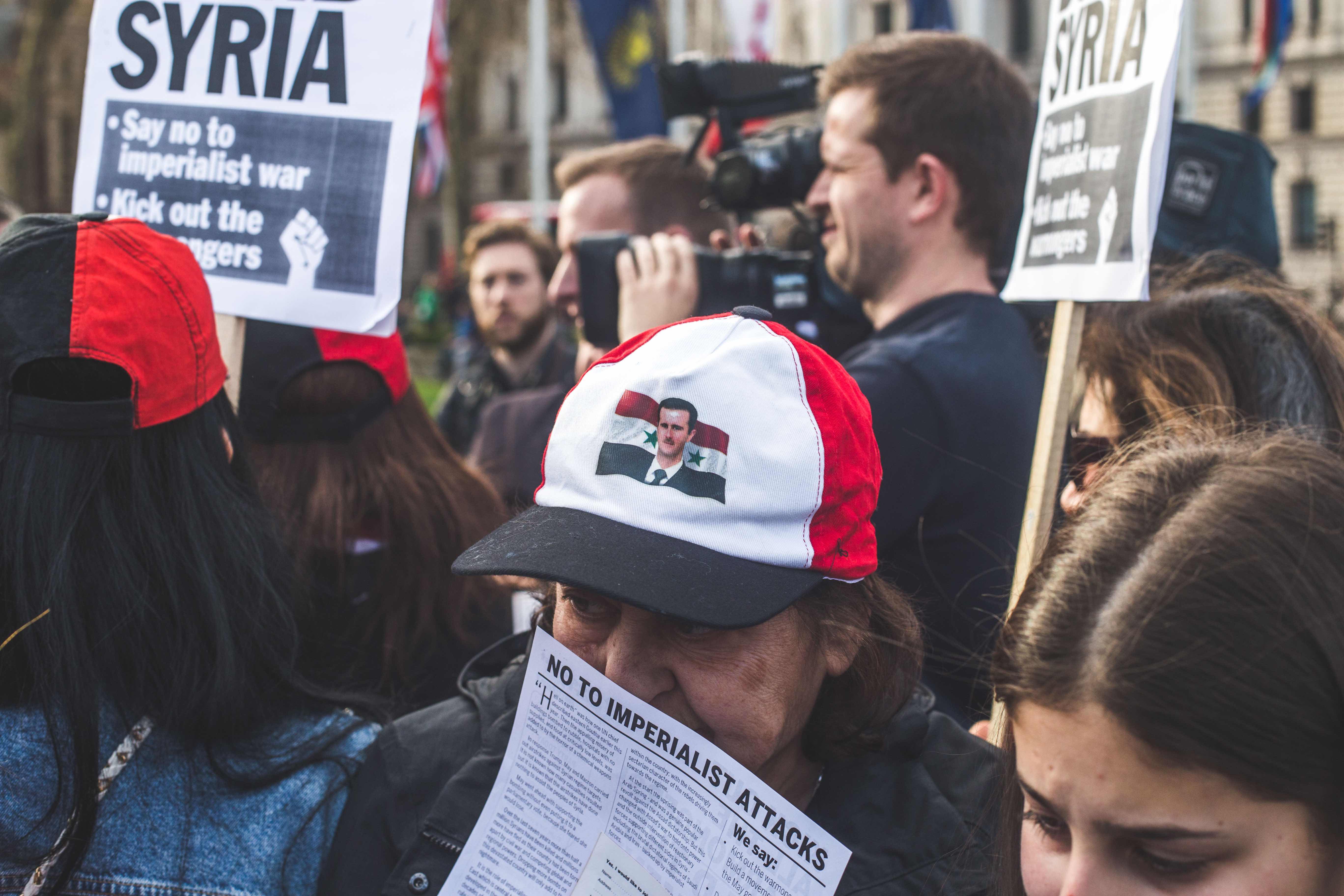 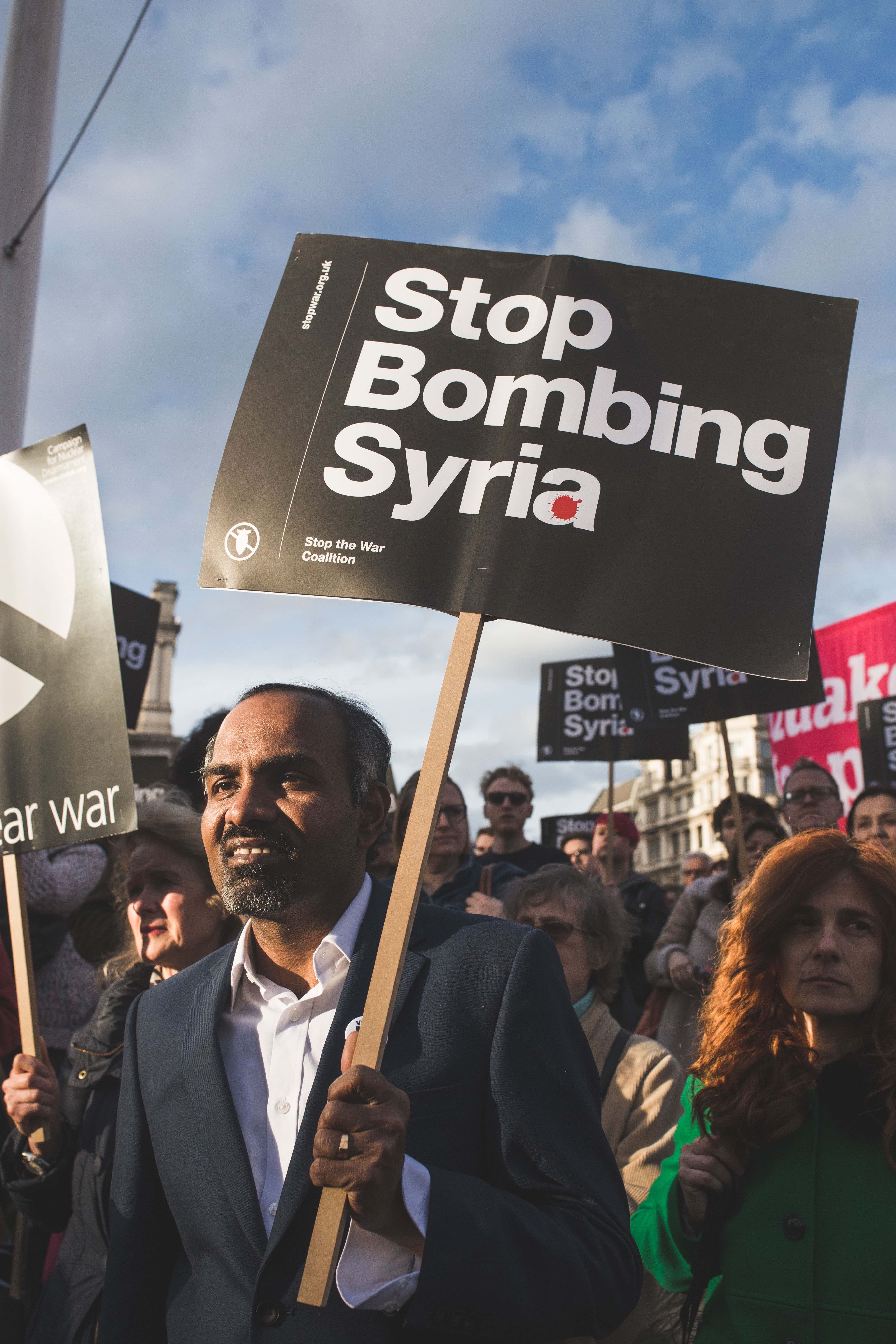 Linkedin
RELATED ARTICLES
OTHER ARTICLES
Members of the collective share some of their reasons to run as part of #UnitedBySummits, a campaign that looks to uncover transformative power of the outdoors.
The situation in Afghanistan remains dire, with many groups facing persecution at the hands of the Taliban.
Photographer Phyllis Christopher recalls capturing sex and protest at a time when the city had become a haven for the queer community.
From the Yakuza to a biker gang, Bruce Gilden recounts capturing Tokyo and Osaka in the ‘90s.
A group of Ukrainians living in Poland are helping Ukraine withstand Russia’s brutal invasion by buying supplies and shipping them directly to the war’s frontlines.
To mark the anniversary of the mass trespass of Kinder Scout, a group of hikers came together with the intent of creating a new, fully inclusive culture for rural spaces.