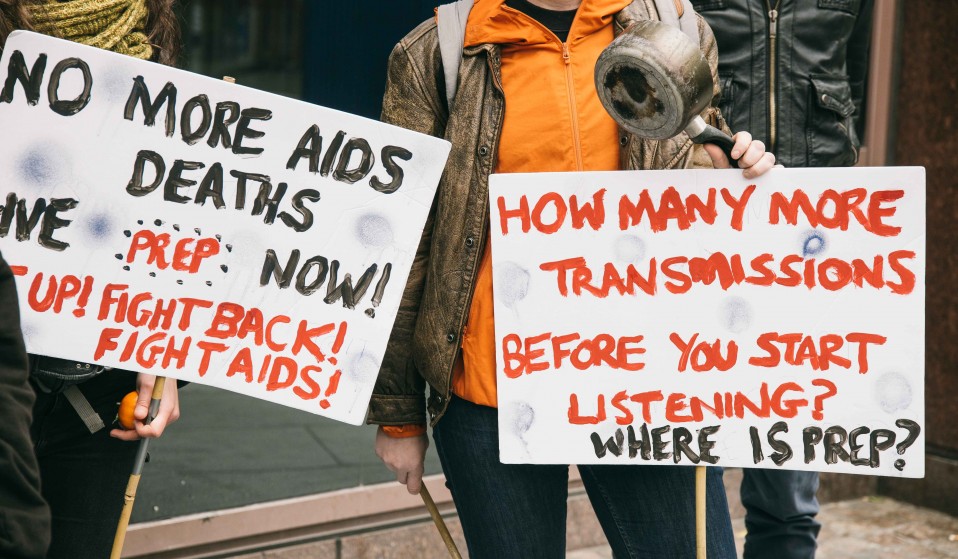 The NHS is refusing to provide the PrEP, a lifesaving drug, to those at risk of HIV infection.

The National Health Service announced last week it wouldn't provide the lifesaving HIV prevention drug, PrEP, to Brits in need. Campaigners are understandably angry, and are promising to escalate direct action until the decision is reversed.

“It’s too late for me to get PrEP because I’ve been diagnosed with HIV for nearly ten years now,” Dan Glass tells me above the traffic noise and chanting outside an imposing central London building. “I know what I’ve been through, and I’m much luckier than most, but I wouldn’t want other people to have to go through it. Nobody needs to live with HIV – it’s totally avoidable.” 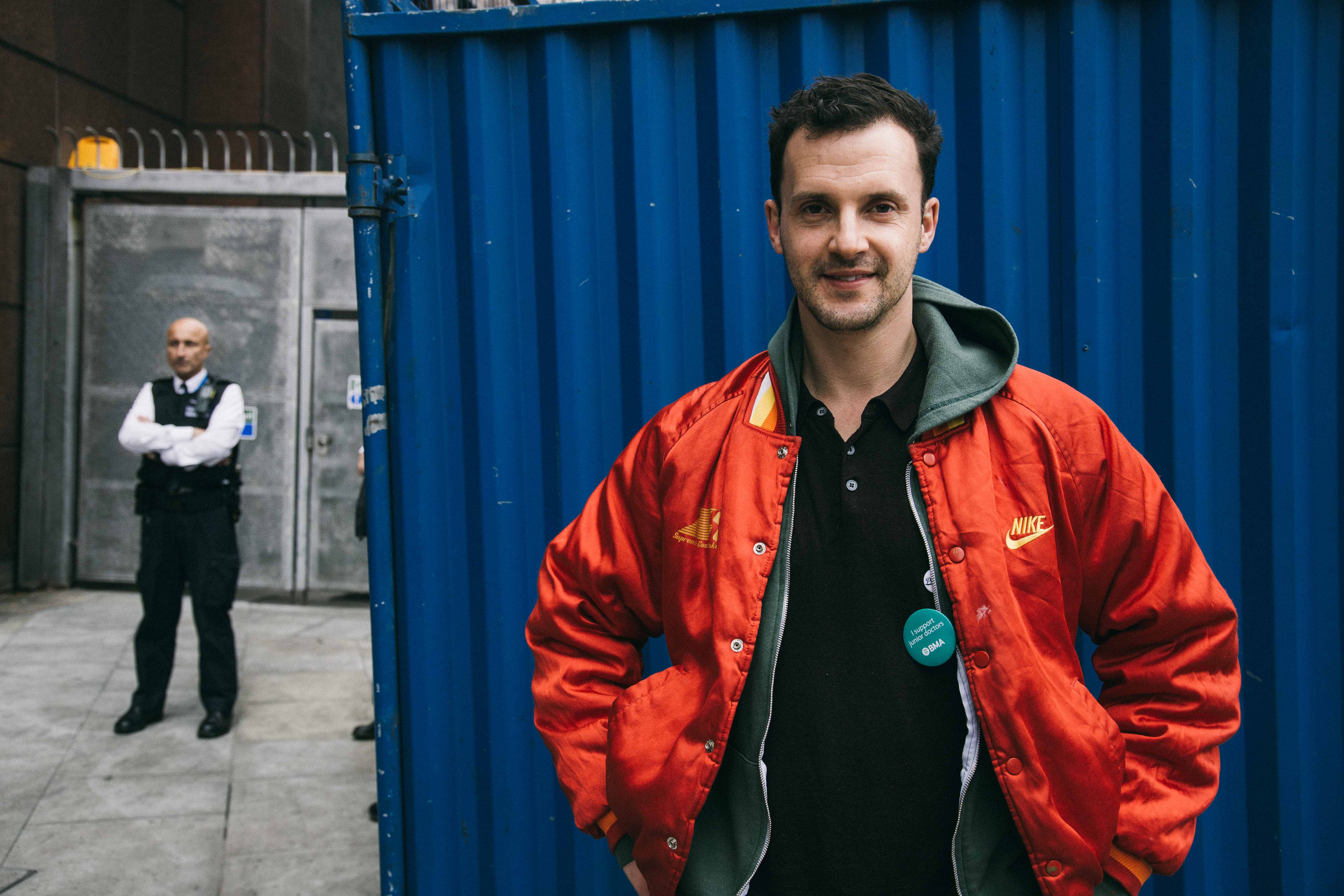 Dan is a member of Act UP London, a campaign group united in anger and committed to direct action to end the HIV pandemic, along with the broader inequalities and injustices that perpetuate it. Act UP was formed in New York City in 1987, a direct response to the AIDS crisis that was sweeping gay communities on both sides of the Atlantic and beyond. 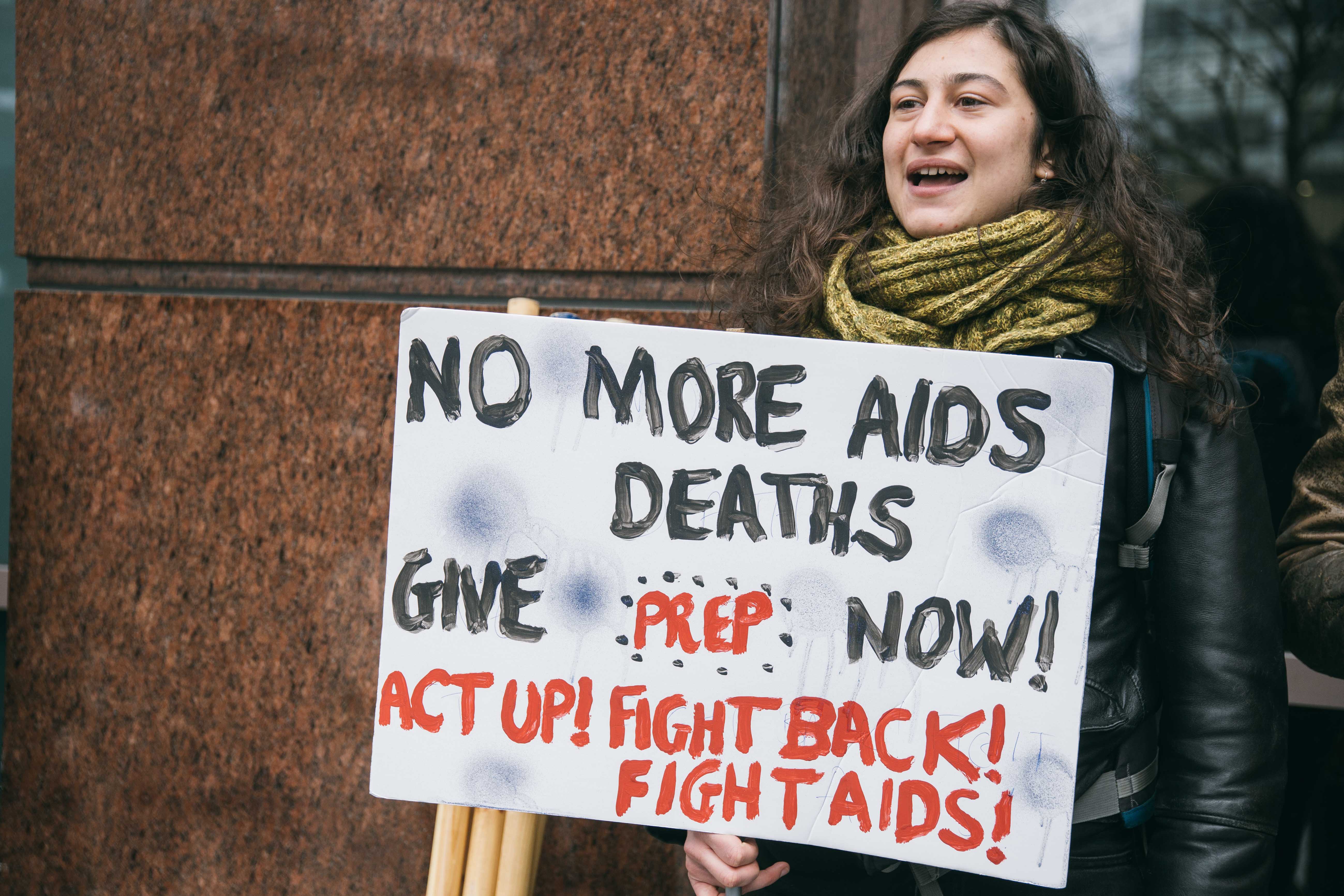 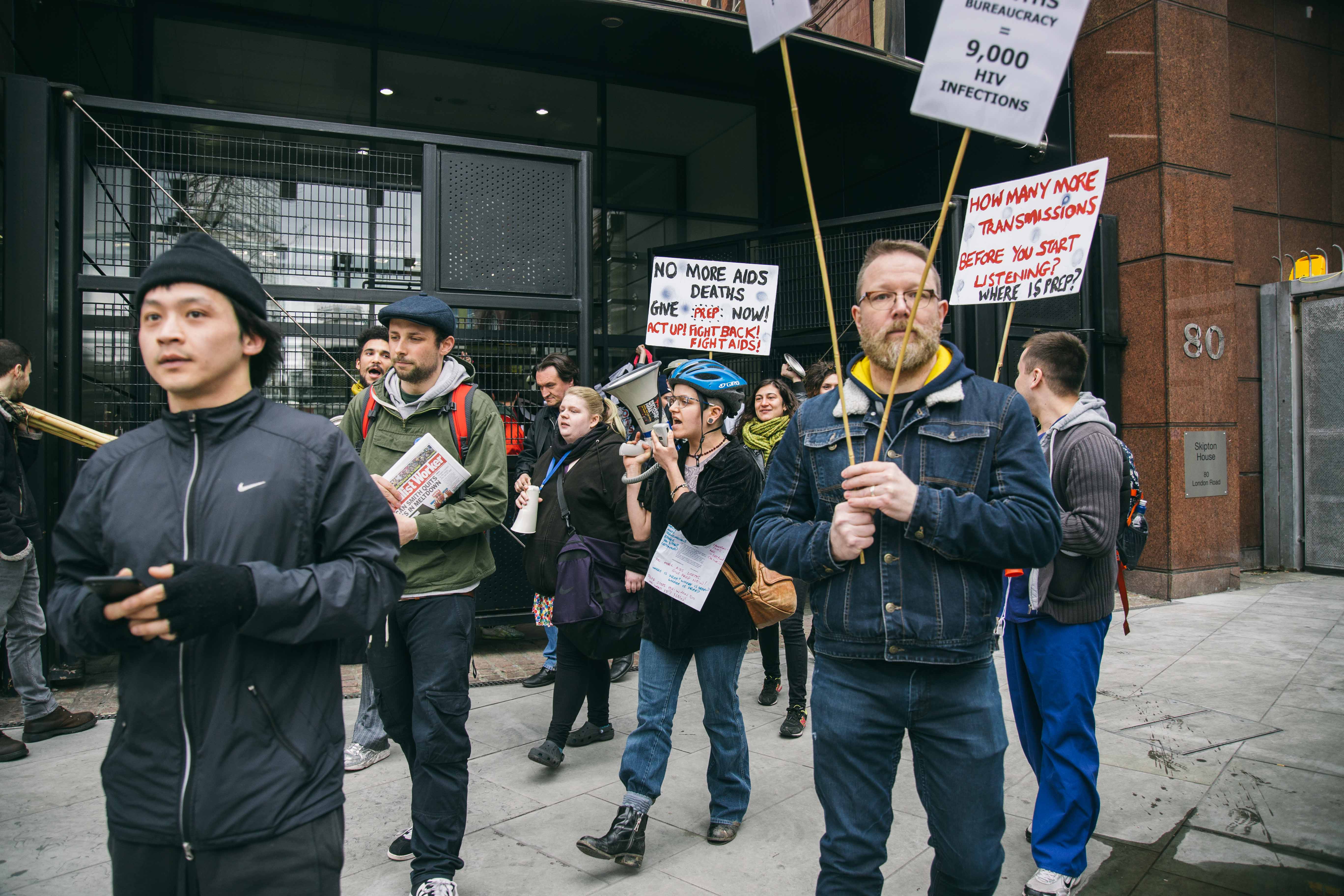 For nearly a year, the National Health Service had been leading us to believe they were going to finally take action. A review into the provision of lifesaving drugs had been underway. PrEP, which stands for pre-exposure prophylaxis, is a scientifically proven method of preventing HIV transmission.

The HIV treatment pill mostly used in the PrEP method, Truvada, can safely be taken on a daily basis by gay and bisexual men, and a recent study showed that doing so reduced the risk of HIV transmission by up to 86%. When the NHS announced last week they would not be making the drug available to those who need it, the anger and frustration was palpable. 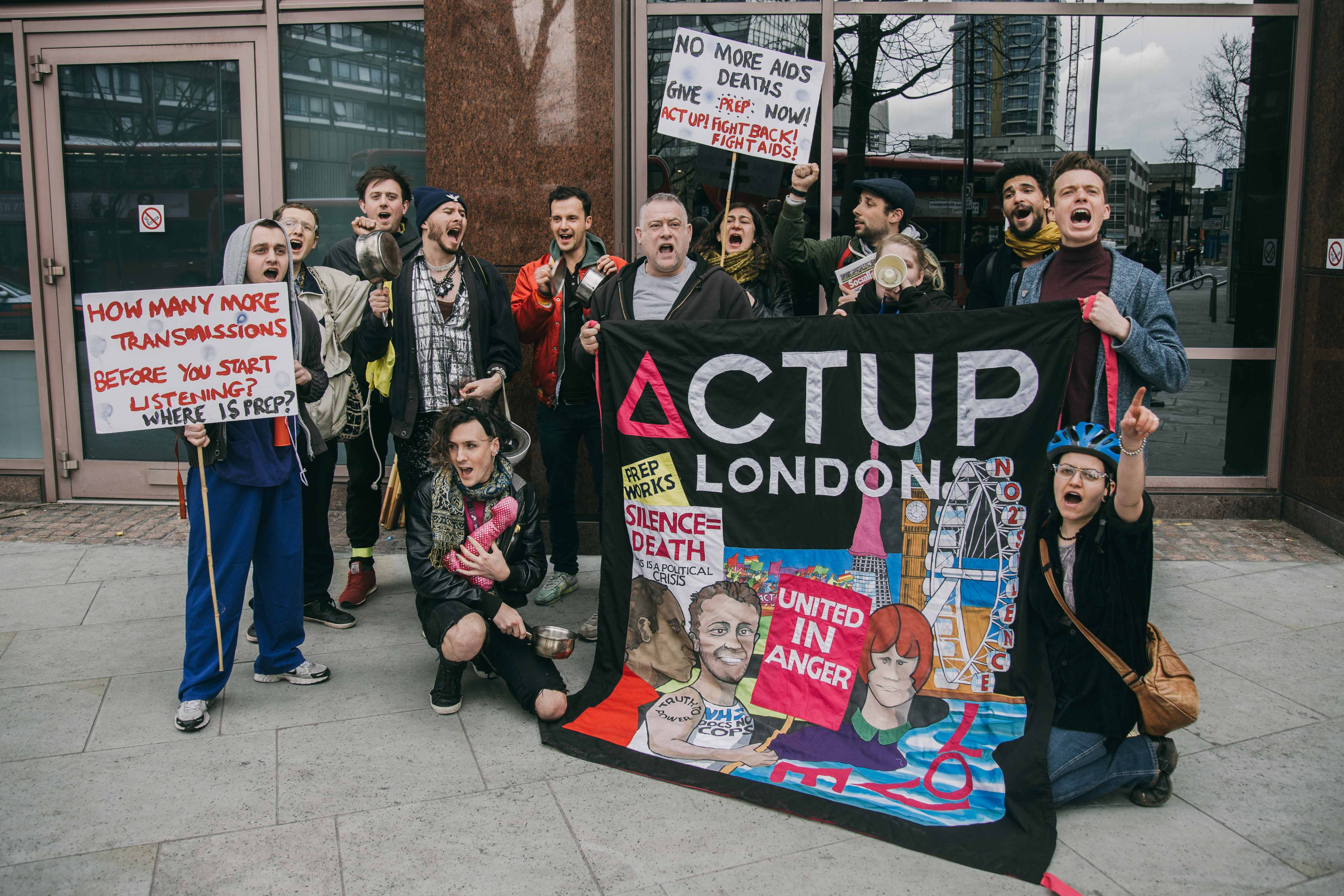 “Last week NHS England released a statement saying they wouldn’t release PrEP for at least two years pending further research into its efficacy,” says Dani, another protestor, waving a placard high in the air. “PrEP has already been proven, time and again, to be effective at reducing transmission levels. It’s a decision that makes no sense at all.” 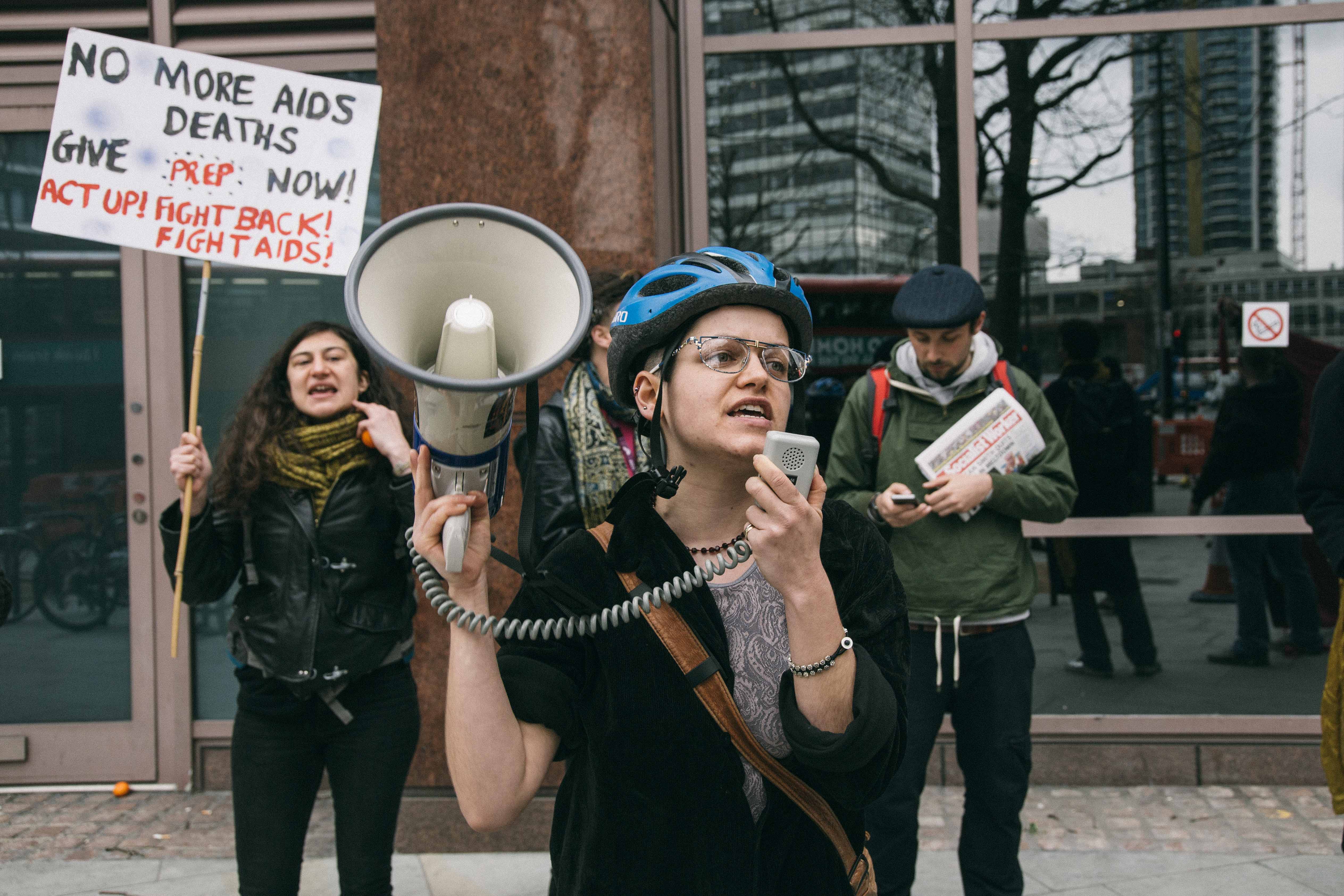 Dani, Dan, and a crowd of others have decided it’s time to take action, calling an urgent demonstration at the office in South London where this decision was made. Armed with signs, megaphones, and effervescent rage, around twenty campaigners braved the rain to make it clear to those who don’t believe PrEP is a priority that they wouldn’t be taking the news lying down. 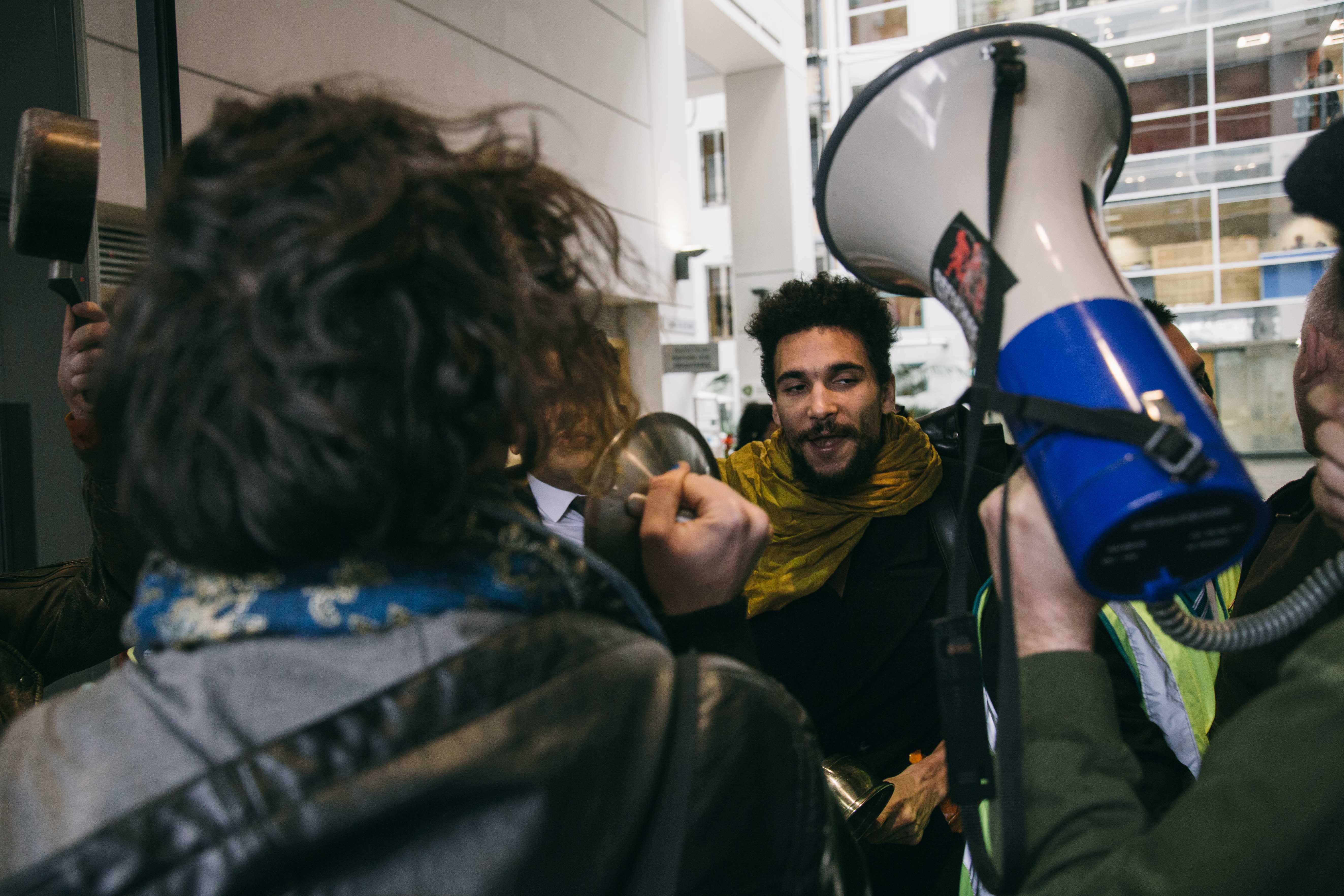 As the noise gets louder, pans used as drums drawing attention from those inside and out, a handful of protestors barge their way into the security-clad building. “We’re here to see Simon Stevens”, one voice shouts out, “the head of NHS England needs to hear what we have to say.” 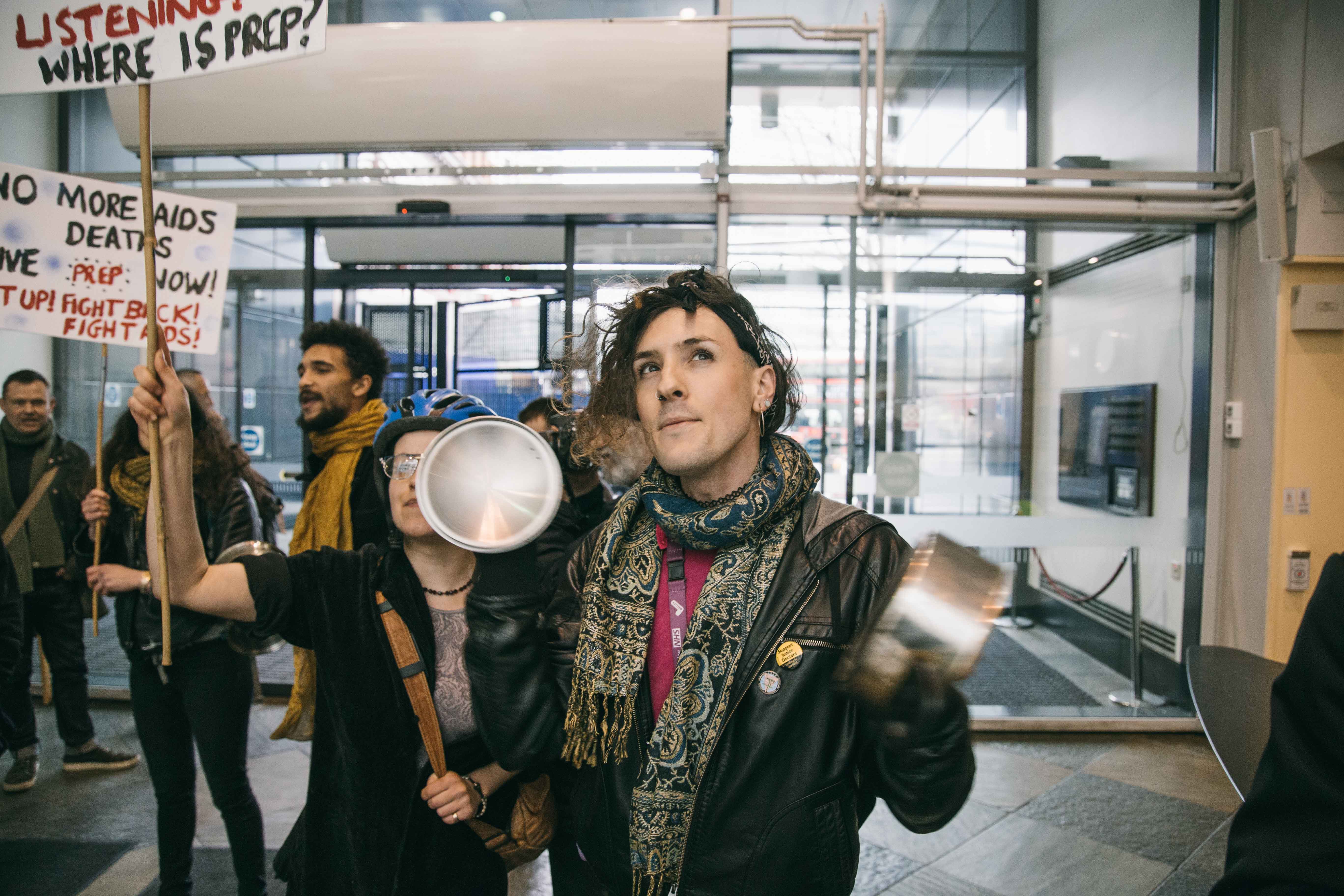 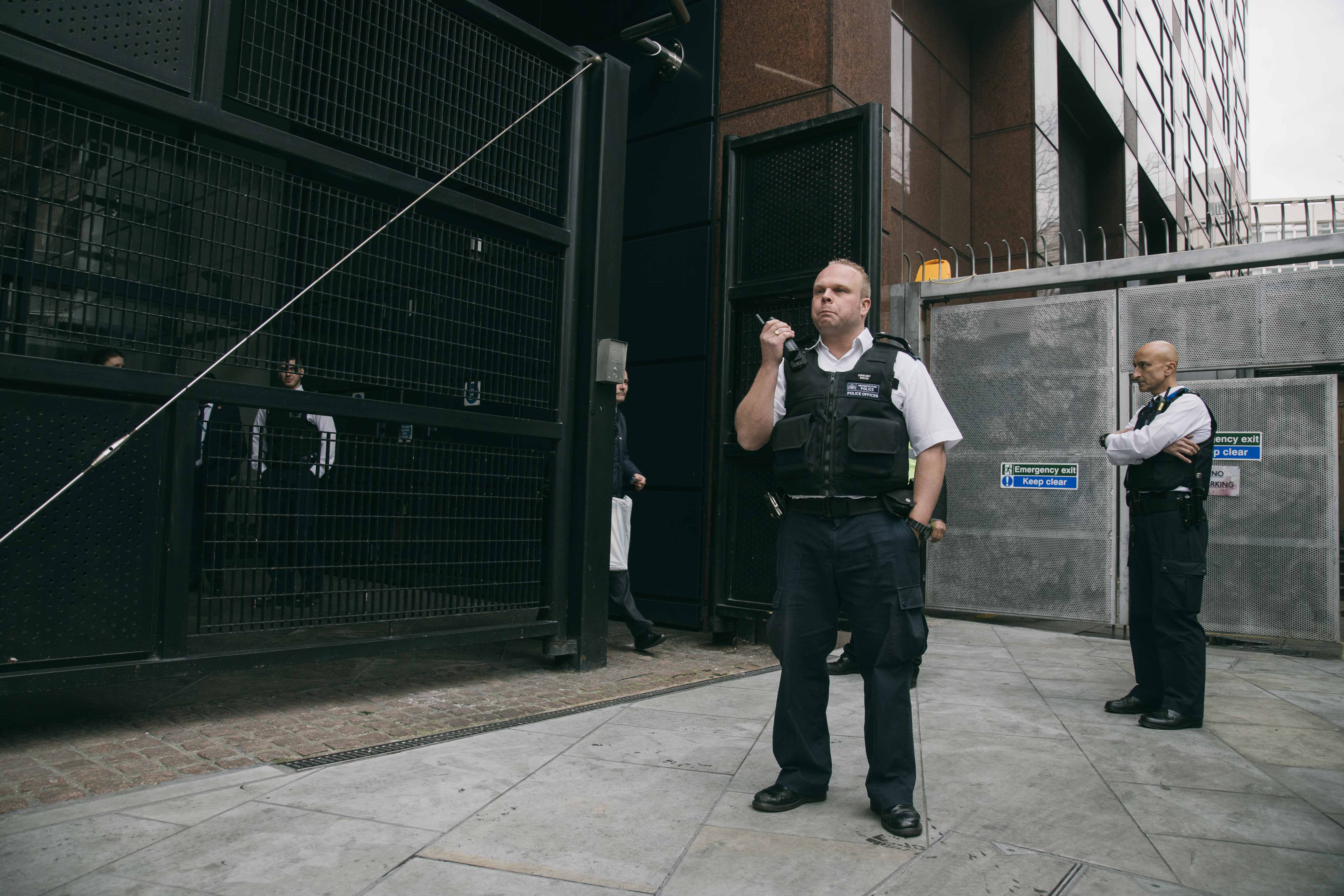 As a group of confused security guards look on bemused,  a handful of cops turn up to see what the fuss is about. Back outside I start talking to Gareth Hardy, who has also come along to kick up a fuss.

“PrEP is now available in the U.S., in France, in Kenya, and in lots of other countries for people who are not HIV-positive to prevent themselves getting infected,” he explain, as those inside start filing back out onto the street.

“What’s happening here in Britain is that the Tory government have basically decided that sexual health prevention measures need to be taken out of the hands of a national strategy and the NHS, and instead be put under the control of cash strapped local authorities, who are all having their budgets cut.” 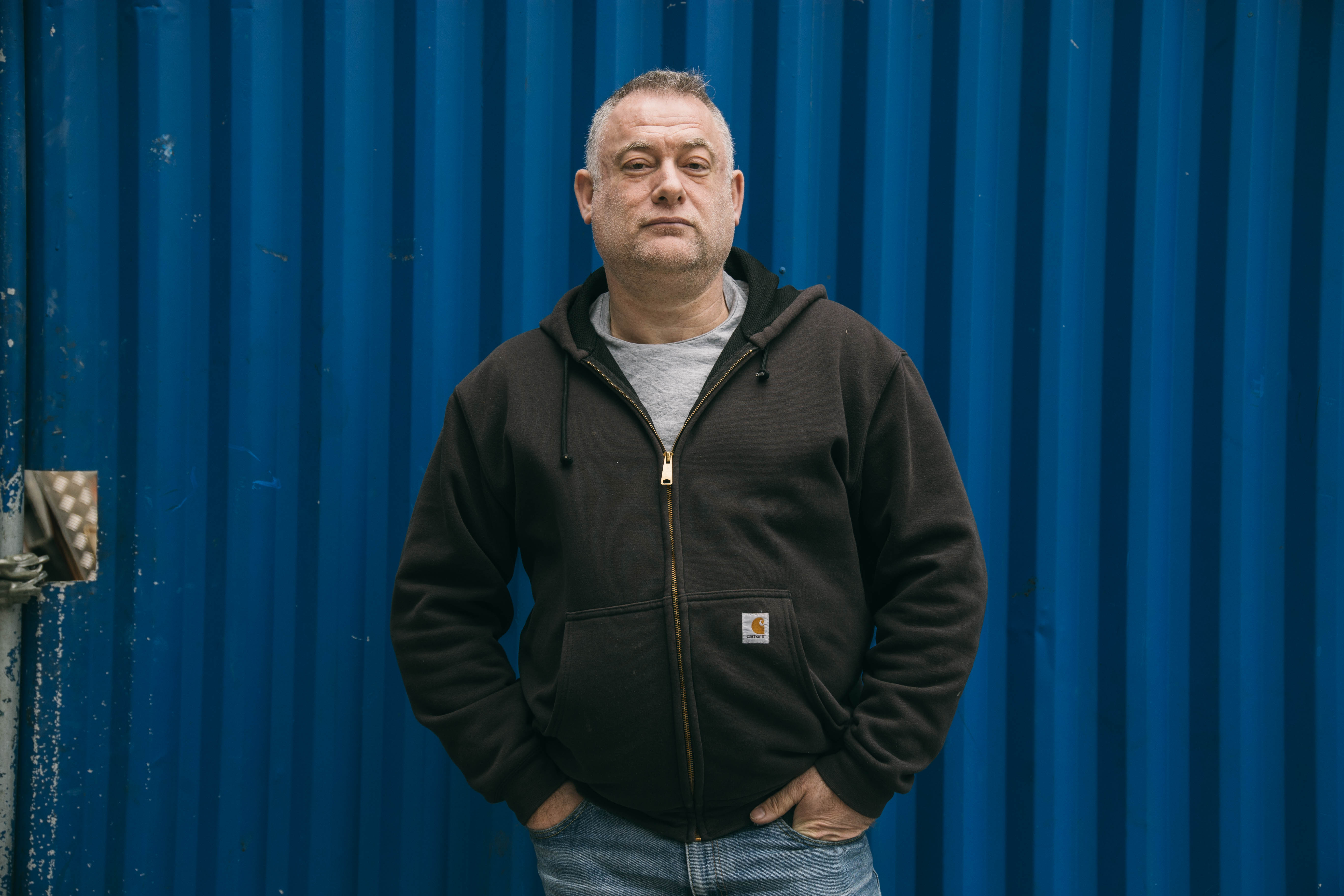 The result, argues Gareth, will be a postcode lottery in terms of prevention and healthcare, and it’s a game of chance that will cost lives.

With the crowd heading off to organise their next action, and they promise me there’s still plenty more to come, I catch up with Dan Glass again, who’s pleased with the way the afternoon has panned out.

“The thing is, PrEP isn’t just economically beneficial, as it costs a lot more for treatment than it does for prevention, it’s also morally corrupt to make a decision like this,” he suggests. 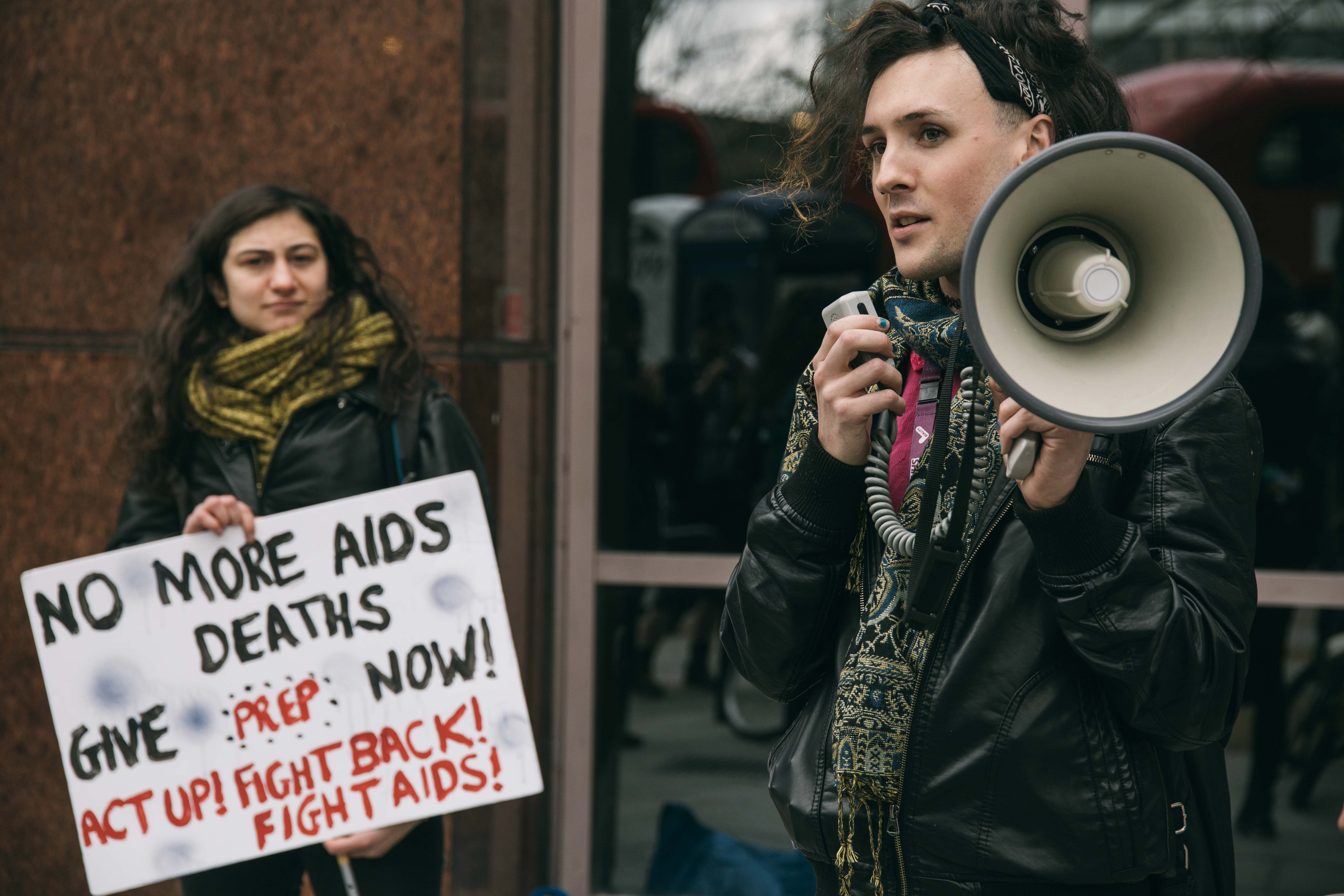 “PrEP is one of the key tools that we have to stop the HIV epidemic, and it is an epidemic. So many people have been diagnosed this year, and people will continue to die now.” 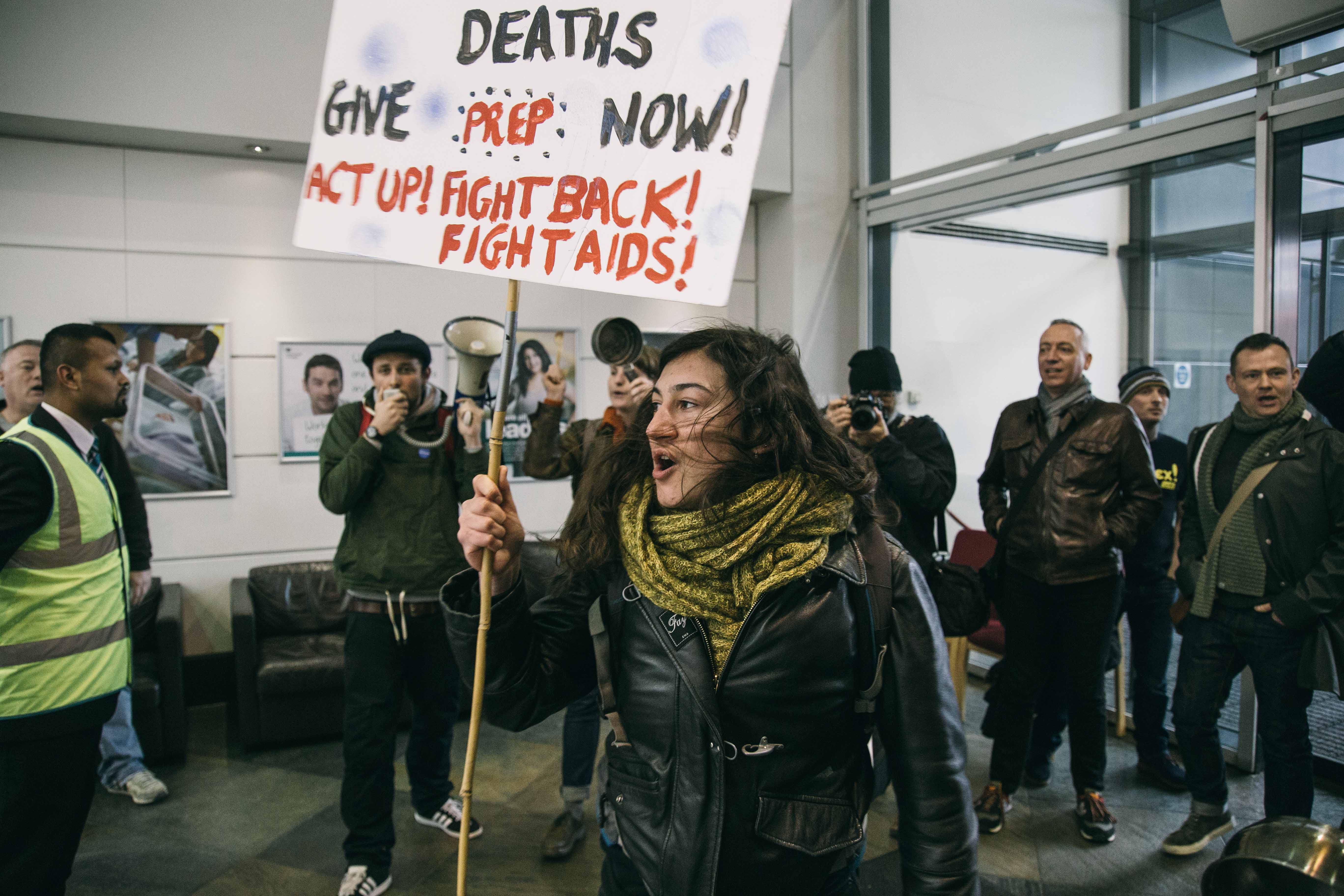 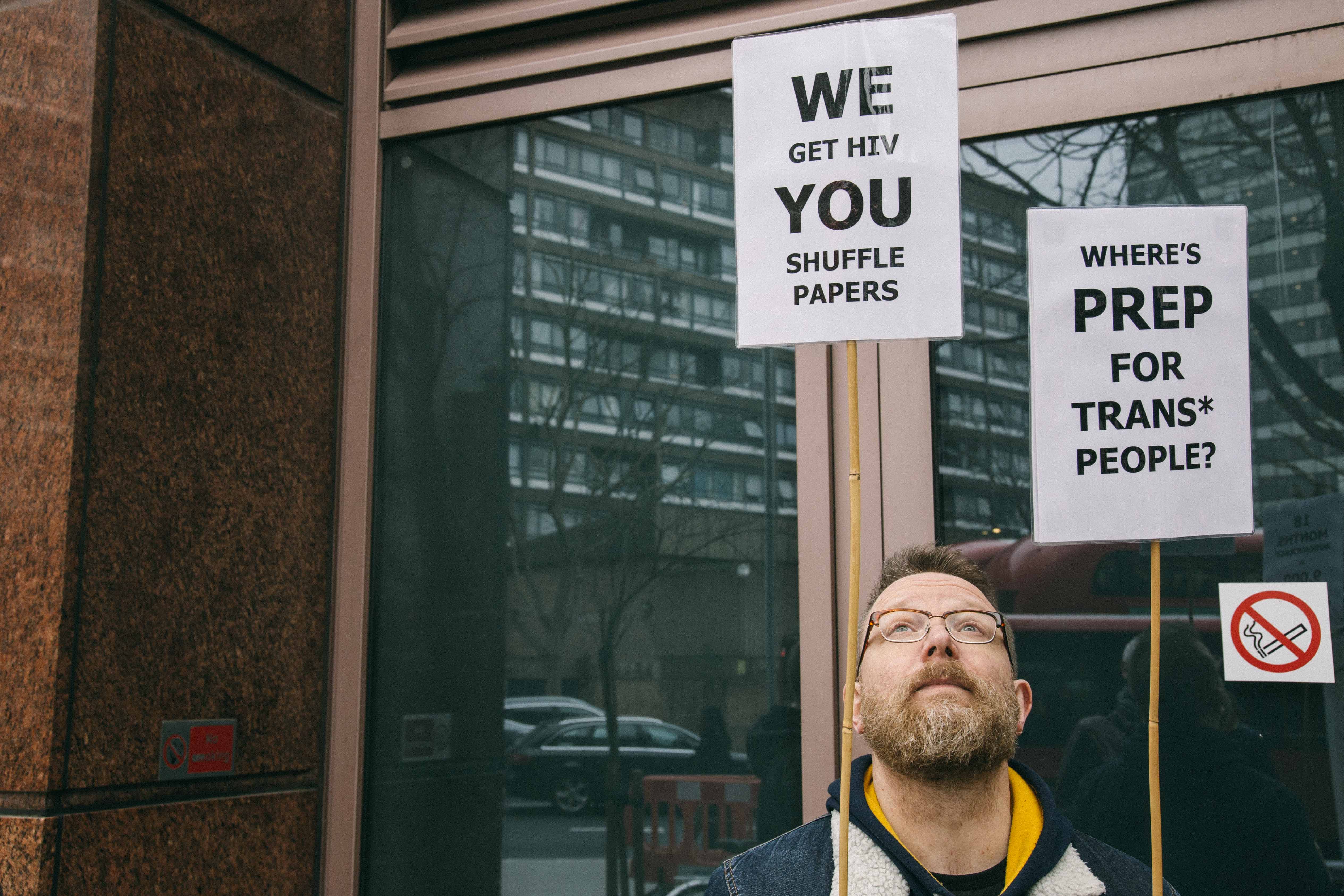 You can keep up to date with Act Up London by liking them on Facebook here.

Linkedin
RELATED ARTICLES
OTHER ARTICLES
Rhiannon Adam spent three months capturing an ageing society wracked by division, isolation, and the aftermath of scandal.
As the Scottish government announces a rent freeze, an activist with Living Rent who fought and won shares how they did it, and what must come next.
A group of young Palestinians have found temporary freedom in the act of parkour, reimagining wreckage and ruins as a series of high-octane playgrounds.
By turning a real-life crisis into daytime television fodder, TV bosses have once again shown themselves to be completely out of touch with audiences.
The workforce is now gearing up for industrial action after receiving a measly pay rise, reports Ella Glover.
Thousands attended the annual event this year to wheelie through the city and call for ‘knives down, bikes up’.