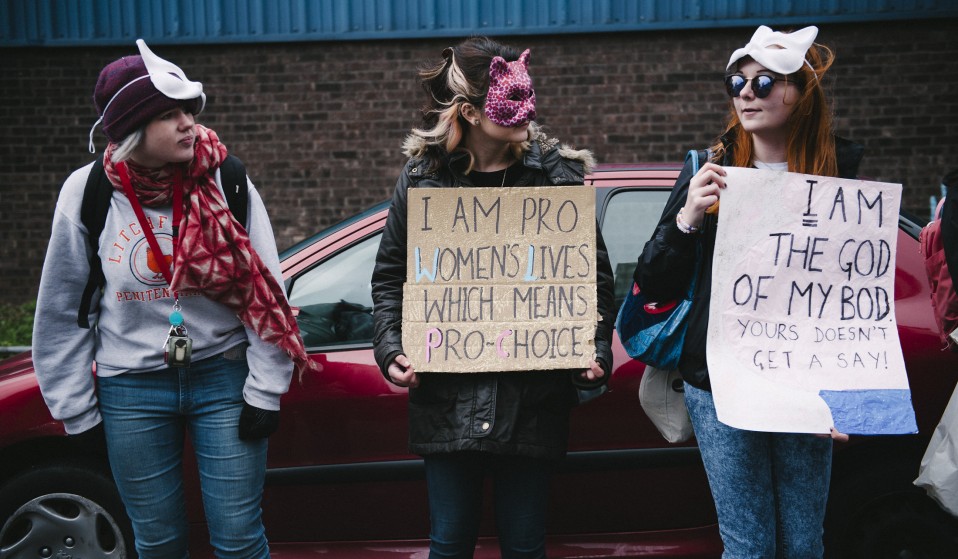 As women in Poland go on strike to fight abortion laws, it's easy to think in Britain our right to choose is secure. The law might be on the side of women, but our autonomy is constantly under threat.

As women in Poland go on strike to fight abortion laws, it's easy to think in Britain our right to choose is secure. The law might be on the side of women, but our autonomy is constantly under threat.

This week, thousands of women across Poland went on strike to protest plans to increase restrictions on their already severely limited abortion rights. ‘Black Monday,’ as it was dubbed, aimed to disruptively draw attention to the issue by grinding the country to a halt.

In some parts of the largely Catholic nation, the number of women estimated to have taken part in the strike amounts to nearly 60% of the workforce. Since then, the polish government has signalled a possible U-turn on it’s proposition of a total ban, but there are still seven countries in Europe where the procedure is almost always illegal.

Reproductive rights (or lack thereof) are a hot topic right now. In the supposedly forward-thinking and generally liberal west, women who have enjoyed relative ownership of their bodies for years are increasingly seeing their autonomy threatened. In eight European countries access to abortions is already severely limited, and who can forget those words of Donald Trump? 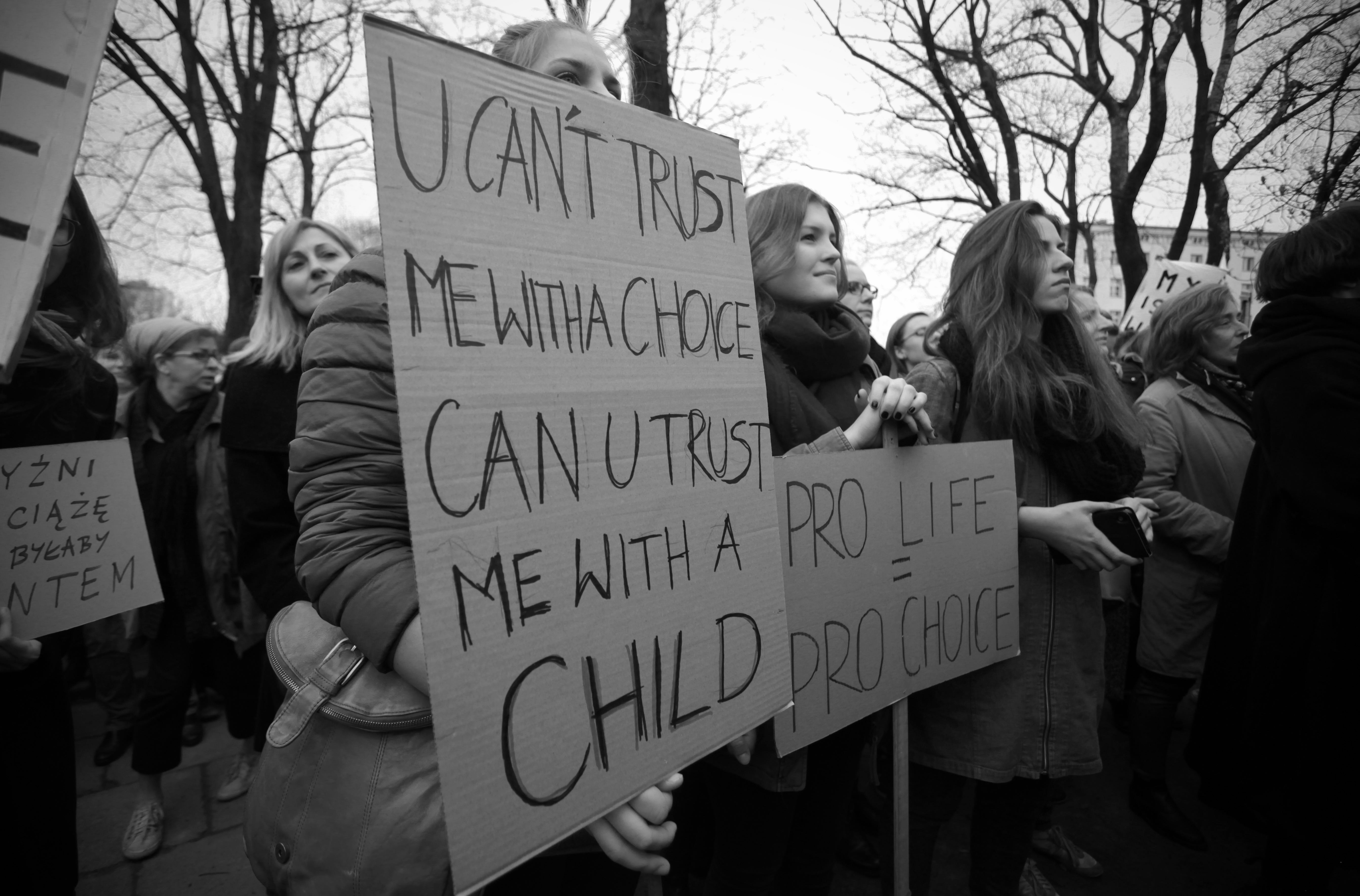 In the midst of all of this, it’s easy to feel secure in Britain where our right to choose for ourselves seems stable. We’ve grown up in a society that leaves the crippling uncertainty of such a life-altering decision up to us. Right?

The national pro-choice Campaign, Abortion Rights, thinks there is more to the story. “I think a lot of people of my generation and younger, think that we’ve won the struggle already: ‘We’ve got legal abortion, so what’s the problem?’” says Kerry Abel, Chair of the campaign.

But women who have actually gone through the process of seeking out an abortion in Britain are often finding it’s not that straightforward.

When Tara, 23, found out she was two months pregnant despite having the the coil for two years, healthcare professionals told her that she was ‘lucky’ it was so easy to ‘sort out.’ And it can seem that way; dealing with our beloved National Health Service is at times a bit of a ball-ache, but the point is it is there to offer us safe, legal terminations if and when we need them.

“The big thing was that I had the coil,” she says, “I’d eventually managed to get a phone consultation with one of the main [abortion] agencies, but they just didn’t know what to do with me because I was already on this contraception.” What followed was a game of musical chairs, where Tara was passed around the healthcare system and repeatedly told that they couldn’t help. “But one thing I kept on hearing was how very unlucky I was.”

“Because I was on contraception and in a steady relationship, I got the sense that [healthcare professionals] thought I was more deserving. One woman told me, ‘This really is an unwanted pregnancy, isn’t it? This is why we shouldn’t judge terminations – because of people like you.’”

Though prejudice surrounding abortion might be unspoken here in the UK, Tara’s experience suggests that they do still exist. The subtle insinuation that it was ok to judge a termination based on a perceived carelessness and promiscuity reflects an innate desire to control a woman’s sexuality that transcends legalities. 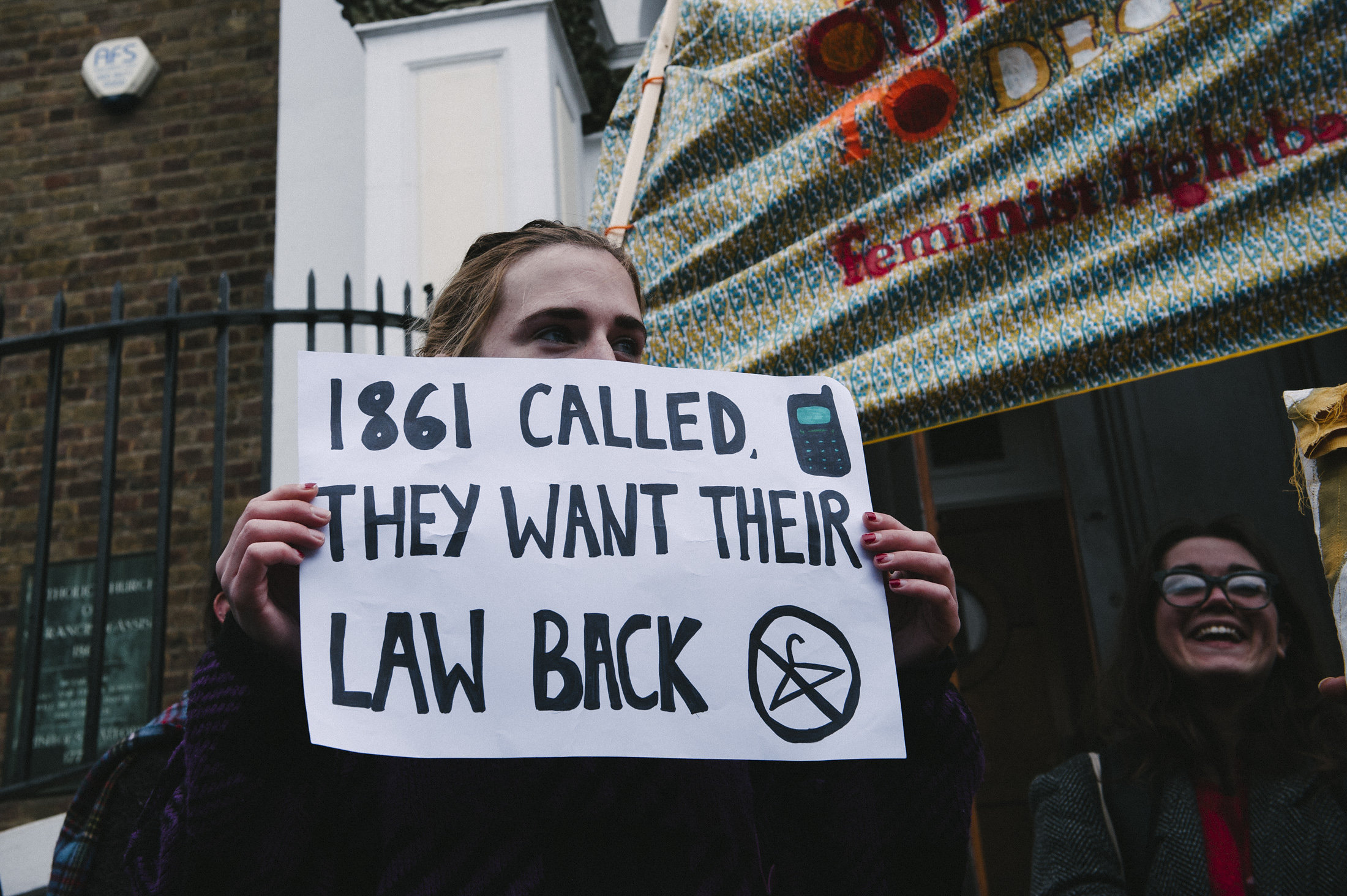 May*, also 23, had an abortion at 18, and feels like because of her age she was taken less seriously. “They delve so unnecessarily deep with the questions they ask,” she remembers. “Like, ‘how did it happen? Who is the father?’ I pretended that I had a boyfriend because I didn’t feel like I could tell them it was a one-night stand. And I had to give them three reasons for not wanting to keep it.”

“I felt like I was being interrogated. It was like I had to fight the doctor to be allowed to have an abortion.”

It’s these ingrained presumptions that are the reason campaigns like Kerry’s exist. “This whole idea of responsibility, and people getting pregnant because they’re ‘stupid’ or they ‘couldn’t be bothered’, underpins so much of [this prejudice],” she says.

“Some people try and emphasise the philosophical element, you know, ‘for a minute, lets take the woman out of the equation and think about when conception starts.’ But we have to put the woman back in the picture, under whatever circumstances.”

Even without the moral argument, access to services and impartial support is tough. We know that the NHS is stretched, particularly because thousands of women are travelling from Ireland every year for safe, legal terminations.

And even if you can secure the correct referrals, information, and everything inside the clinic goes smoothly, pro-life picketers are a common sight outside clinics.

Kerry tells me about a clinic in Brighton who recently looked into the impact of pro-life protests and found that, though the number of abortions didn’t go down, the period of gestation went up. “It’s incredibly damaging to women’s mental health,” she suggests. “If you show up to your appointment and there’s a bunch of [pro-life] activists outside, it’s likely you won’t feel you can go through with it that day. But you’ll go home and realise you need to do it, and put yourself through it all again.”

The women I spoke to might be lucky that they didn’t find themselves in a similar situation in Poland, or in Ireland, where women can still face prison sentences for terminating pregnancy apart from in exceptional circumstances. But it’s unrealistic, and incredibly insensitive, to be told by people who should know better that an abortion is ‘easy to sort out,’ – even in the UK, where they have been legal since 1967.

It’s time we reassess what it means to have an abortion in Britain. This will never be an easy decision, and we need to be conscious that women with unwanted pregnancies are facing pressure from all kinds of external sources, even if the law is technically on their side. It’s a complex issue, and it needs to be handled with care. Not just bureaucratic efficiency.

Linkedin
RELATED ARTICLES
OTHER ARTICLES
After building his reputation covering the US civil rights movement in the 1960s, the photographer went on to produce some of the most enduring images of the past century.
After fleeing the war in Ukraine, people are finding it impossible to secure affordable and decent housing in the UK.
David 'Dee' Delgado’s photo project is about honouring and uplifting the city of his youth, and a world rapidly disappearing under the relentless onslaught of gentrification.
After blocking the Scottish government’s gender recognition reform bill, Westminster is now devising further changes to the law to make it harder for trans people to self-identify.
The pro skateboarder withdrew from the 2020 Olympic Games so he could come out as trans. Now, he’s hoping to encourage others to live as their authentic selves – within the sport and beyond.
A new law change is enabling Britain’s donor-conceived children to know the truth about their origins – but campaigners say the fertility industry must do more to protect people.