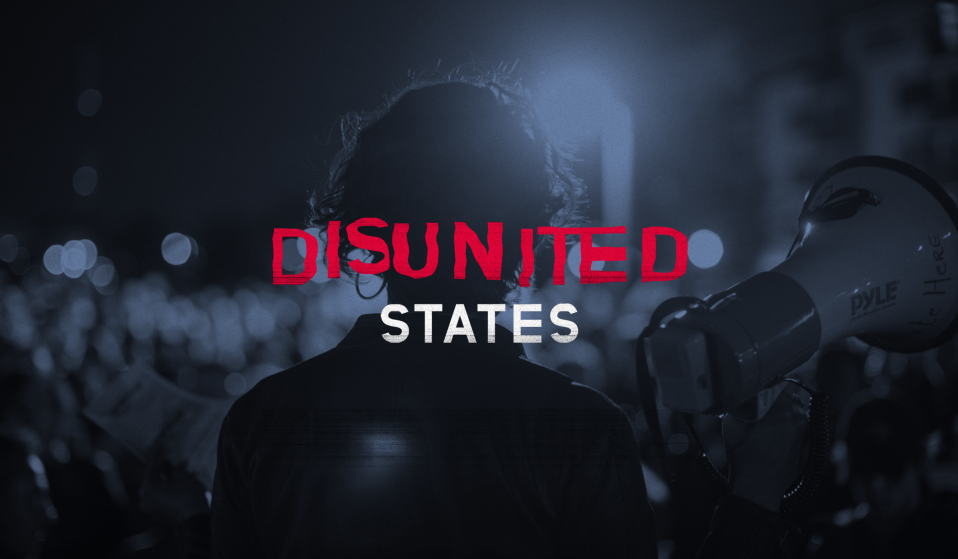 While Trump is preparing to make America great again, divisions in the nation are growing. Protests are swelling, so we join the crowds in Downtown Atlanta.

While Trump is busy preparing to make America great again, divisions in the nation are growing. Across the country protests are swelling, people determined to fight back. We hit the ground for Atlanta's latest anti-Trump action.

It’s getting dark in Downtown Atlanta when I pull up to the city’s Historic Fourth Ward Park. The headlines here for the past few days have been filled with stories of unrest across the USA, impassioned and heartfelt protests by Americans who can’t quite believe what just happened. One hundred hours might have passed since Trump’s election to the White House was confirmed, but the reality is still sinking in, and half of America is still deep in shock – and in mourning.

Atlanta itself is a Democrat island surrounded by a sea of Republican red, a city renowned for it’s diversity in the South, and the protests here show no sign yet of abating. It’s not just here, more than 10,000 people have signed up for New York’s latest march on Saturday, with actions planned across the country in the next few days. 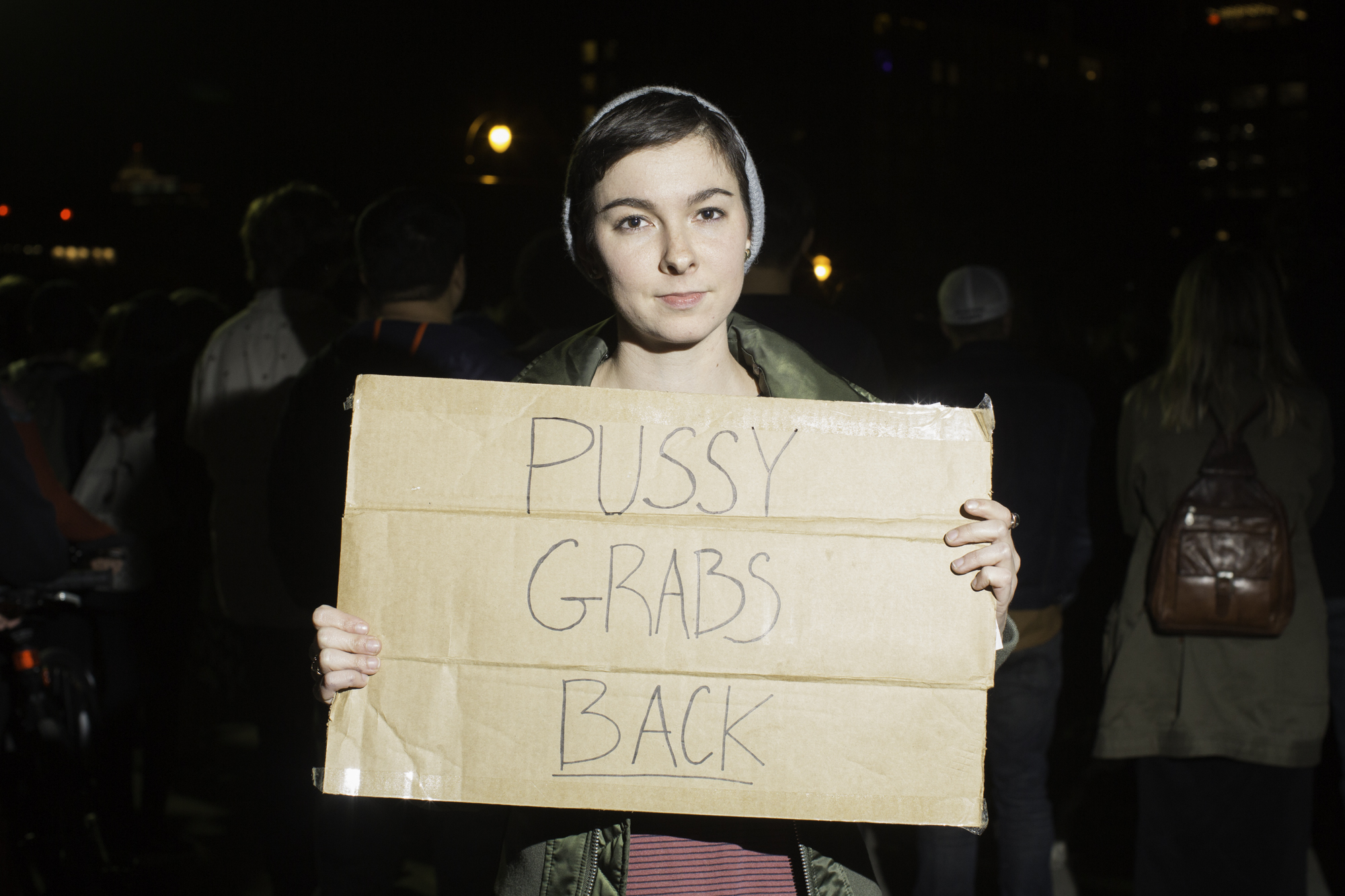 As I make my way onto the dimly lit grass where people are meeting, already a sizeable crowd is gathering. “Are you heading to the protest?”, a young woman asks. I explain that I’m here visiting, keen to see how any resistance will go down on a busy Atlanta Friday night. Her name is Emma Ali, a 25-year-old yoga instructor, Atlanta born and raised. “I’m here tonight because I don’t accept Trump as my President”, she tells me. “I need to be around other people who feel the same way.” 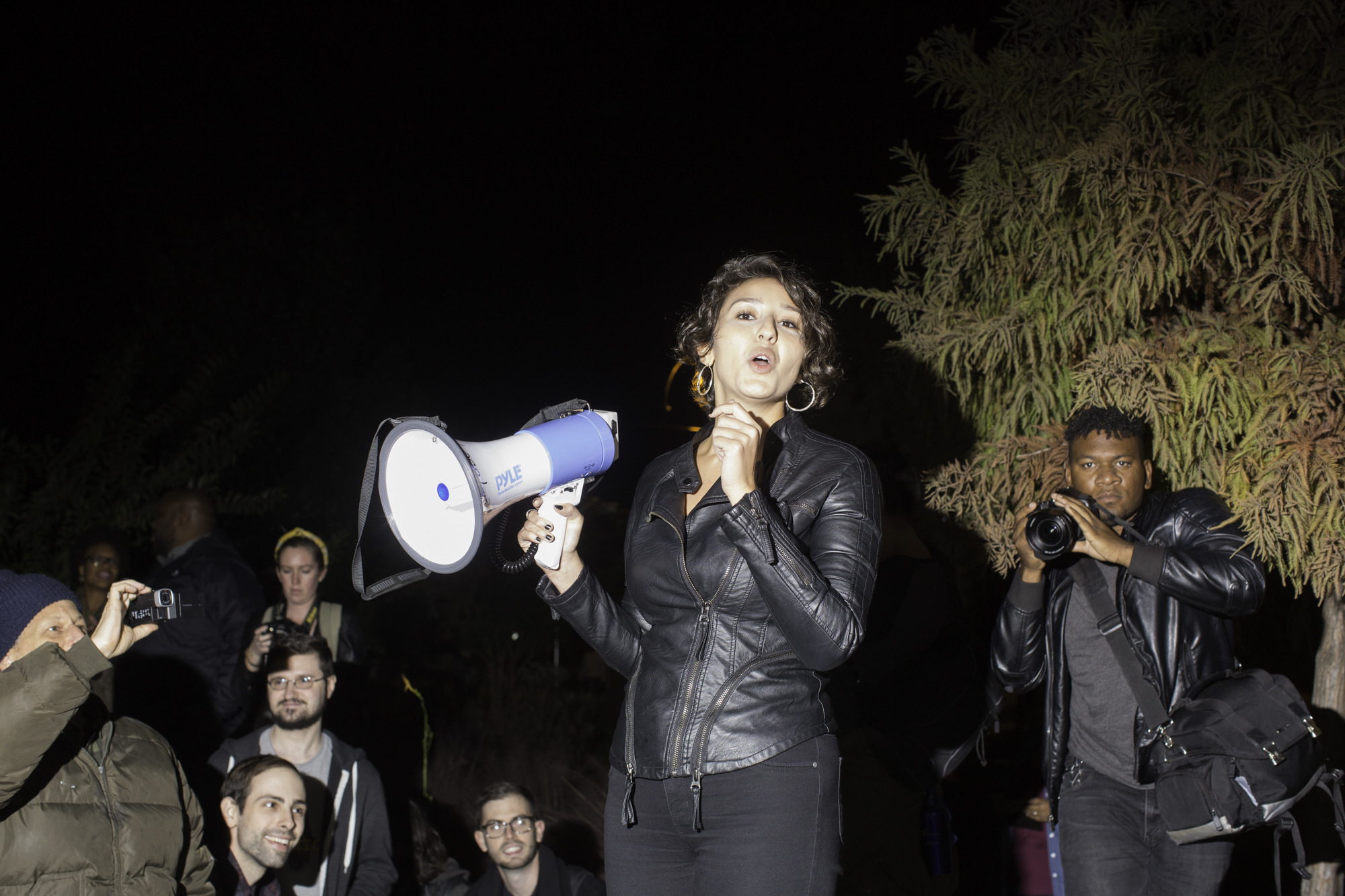 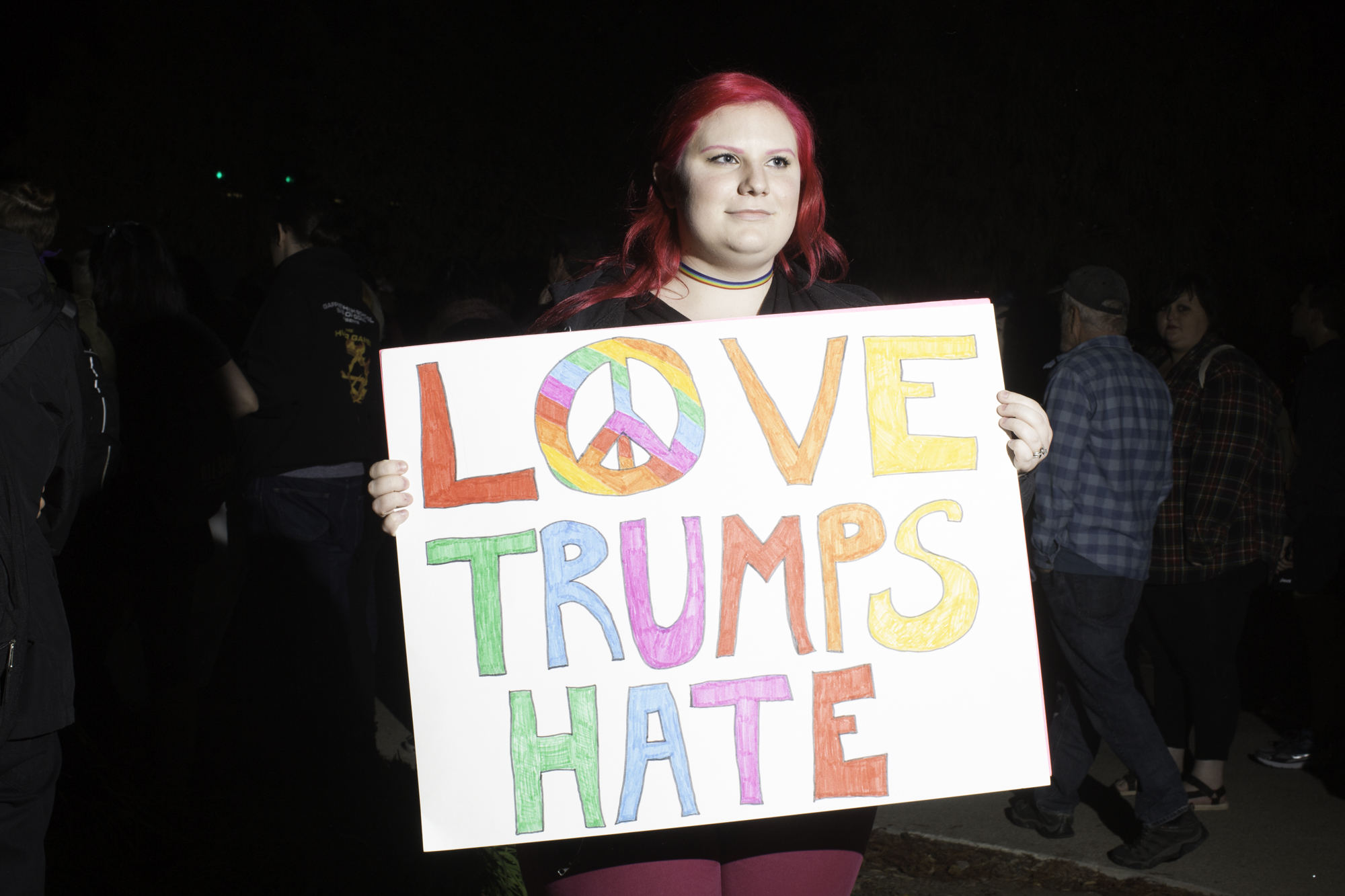 Weaving my way through the crowd that will soon swell into the thousands, it becomes clear that many do feel the same way. Sure, this gathering is a protest, one that within the hour will shut shit down and take to the streets, but for now it’s a place to gather, to reflect, for people to be around their friends and neighbours who are also angry, petrified and not okay.

Handmade placards are in abundance as I push my way towards the front, a woman yielding a megaphone now teaching the assembled protestors the evening’s chants. “Pussy fights back”, is a personal favourite, “not my president” the most regular, and simple to be heard. 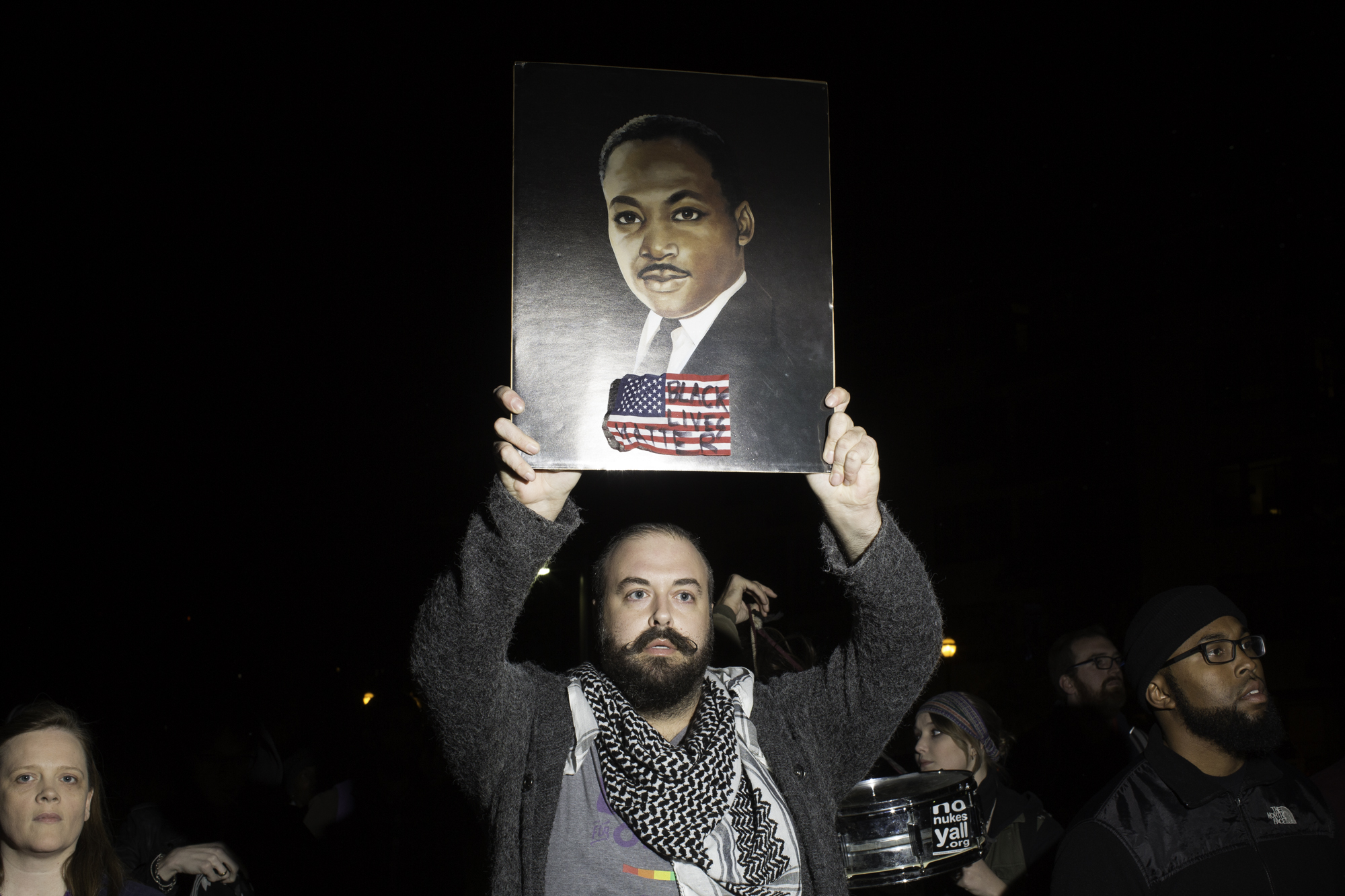 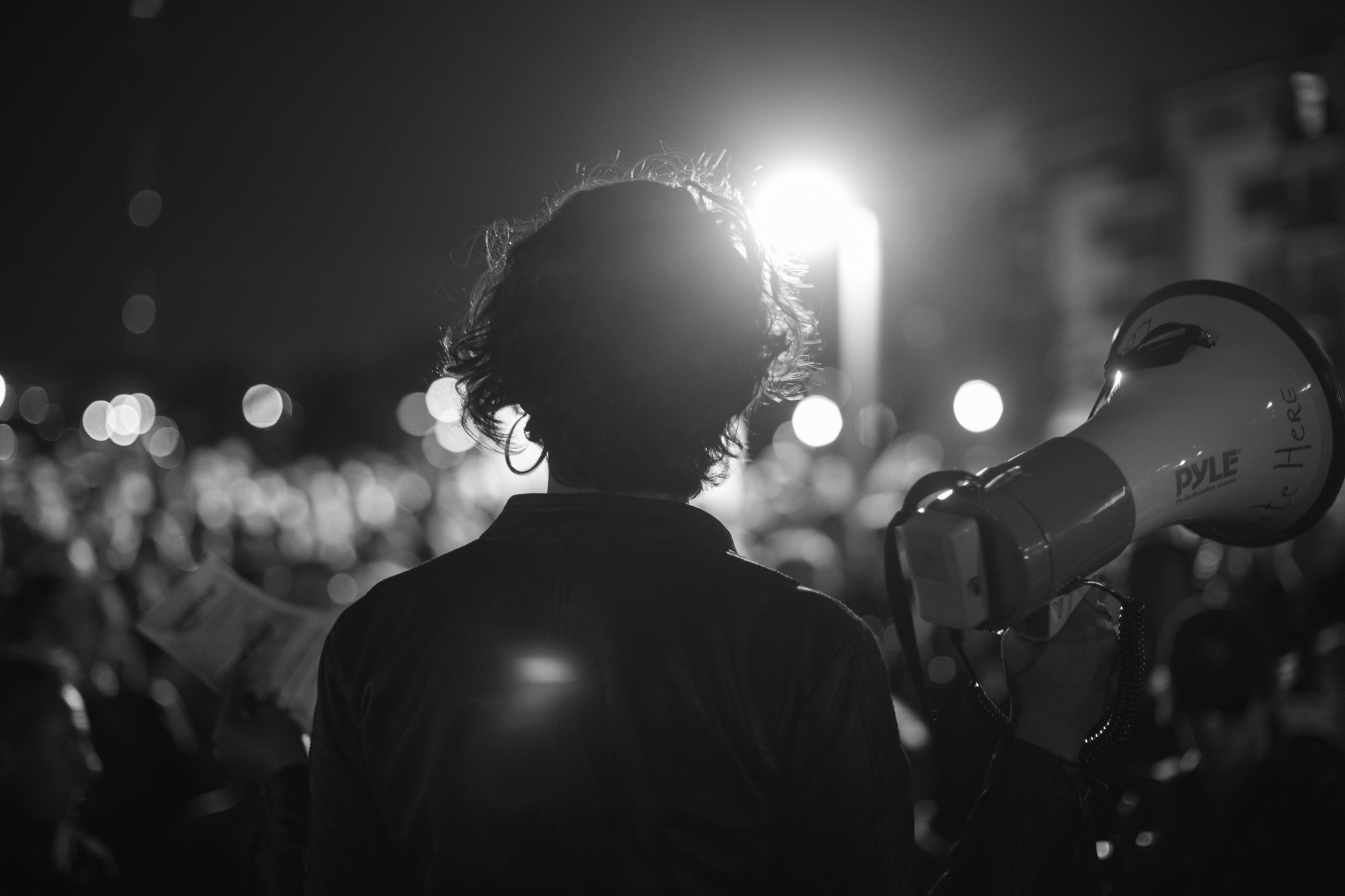 A handful of police helicopters circle above us, cops on both sides of the street are watching on with quiet concern. If they were expecting us to get moving quickly they are in for a surprise, first up anyone wanting to take to the podium is given the chance to.

Often at protests people get bored of all this talk; they come down for action, and action is what they want. Rallies and speeches are often filled with self-congratulatory grandstanding. But tonight there’s something different in the air. People need to grieve, to share their emotions and worries with those who also care. Emma isn’t alone in needing community. 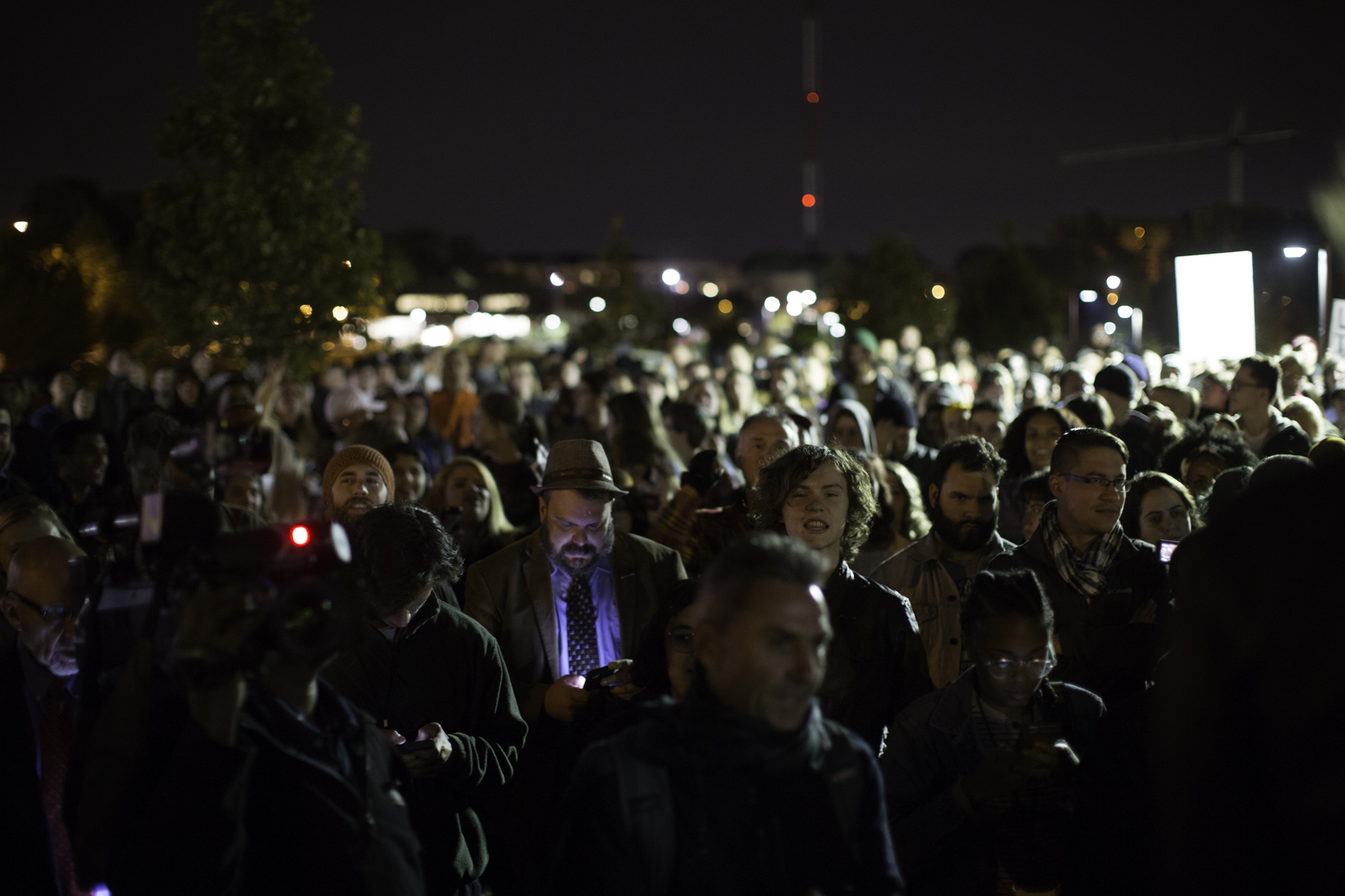 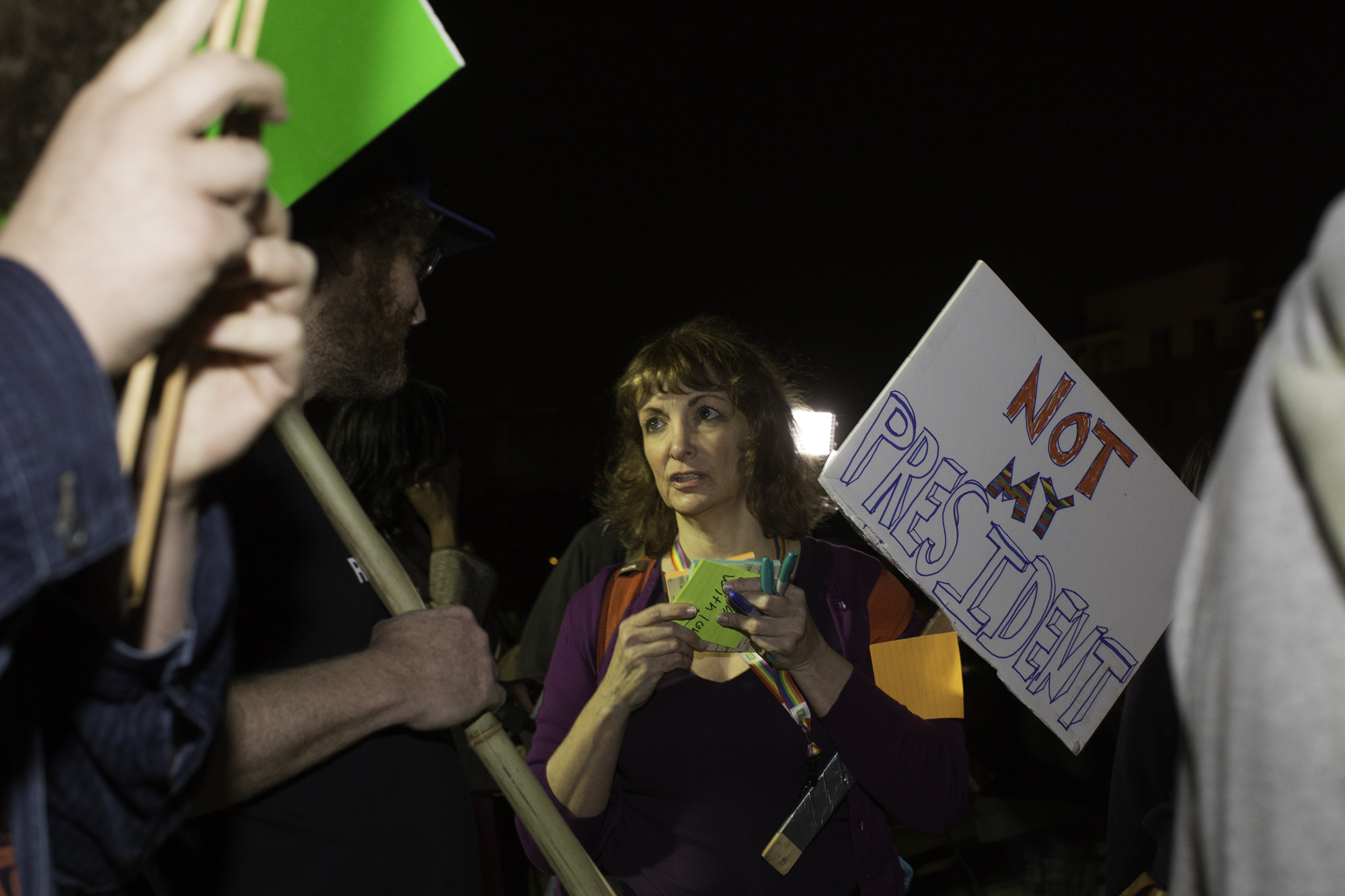 “When I finish my degree I want to offer therapy to LGBT youth”, a woman yells shakily down the mic. “I know you’re angry, but I’m really, really sad and scared for our LGBT youth. Mike Pence, our next Vice President, believes in gay conversion therapy, and not only that, he wants you to pay for it in tax.” The crowd loudly boos, another speaker takes to the stage.

We hear from activists, campaigners, those looking for answers and others apologising on behalf all white people across the USA. I step back into the crowds, interested to inspect the demographic of those attending: it’s a young, diverse crowd – reflective of an urban centre which outright rejected the divisive rhetoric of Trump. 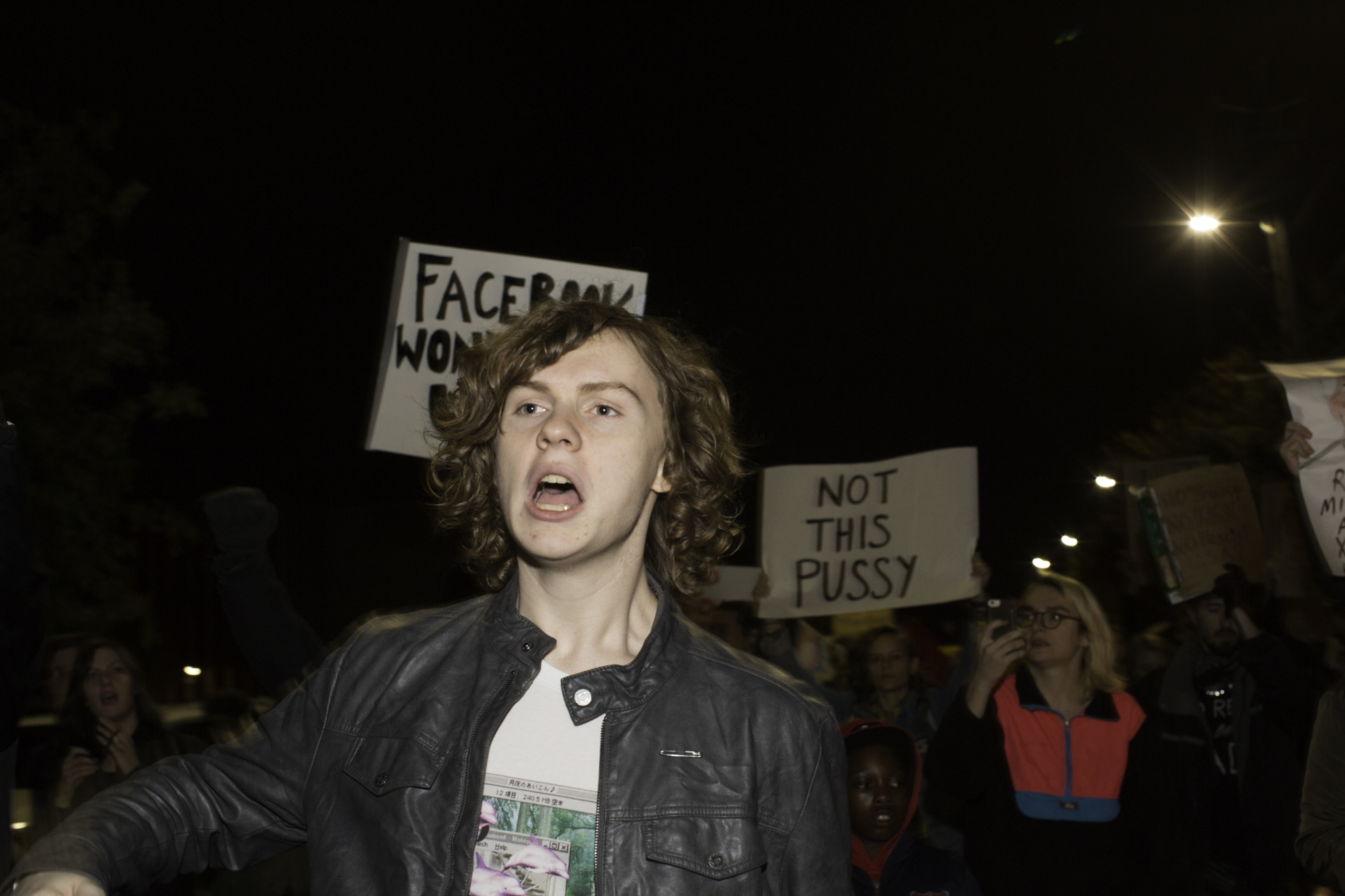 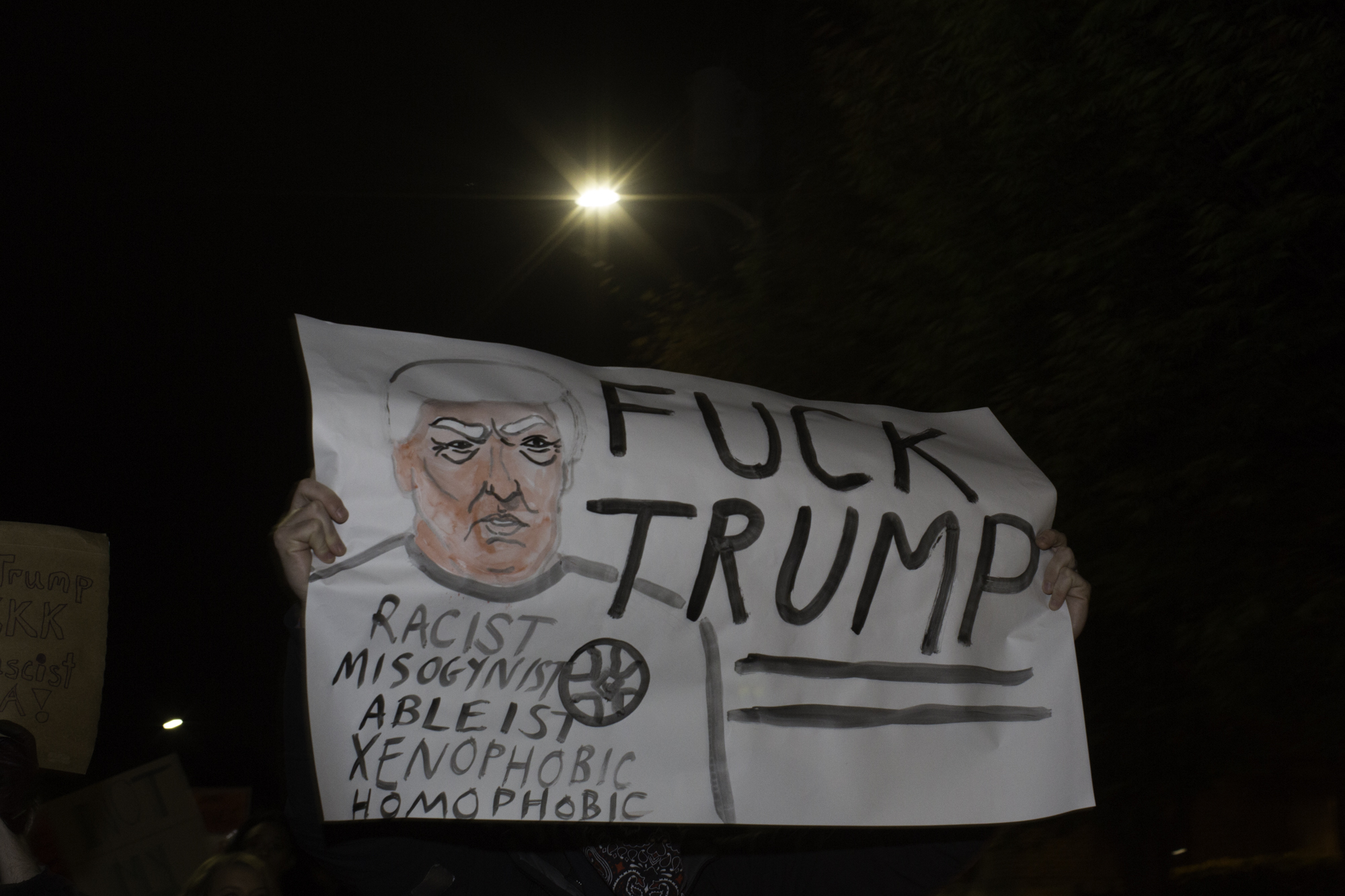 “My parents are immigrants, they came here with nothing but $5 in their pockets,” I hear a young woman explaining, obviously desperate to hold back her tears.

“They put blood, sweat and tears into this country. To think people with my coloured skin will get kicked out of this country after putting so much into it? It’s despicable,” she cries. The crowd boo and whoop to express their anger, dismay and support.

By the time everyone is given their say, a chance to address a crowd that’s by now raring for action, a drum beat is ringing, and it’s time to set off. Quickly the road in this busy part of the city is filled with well over a thousand people; at home in London drivers would be angry, even fuming, but here most people in cars raise their fists or honk their horns as they’re waiting to show support. There’s a mutual understanding with the public that this protest is important, being late for dinner is a price that’s worth paying. 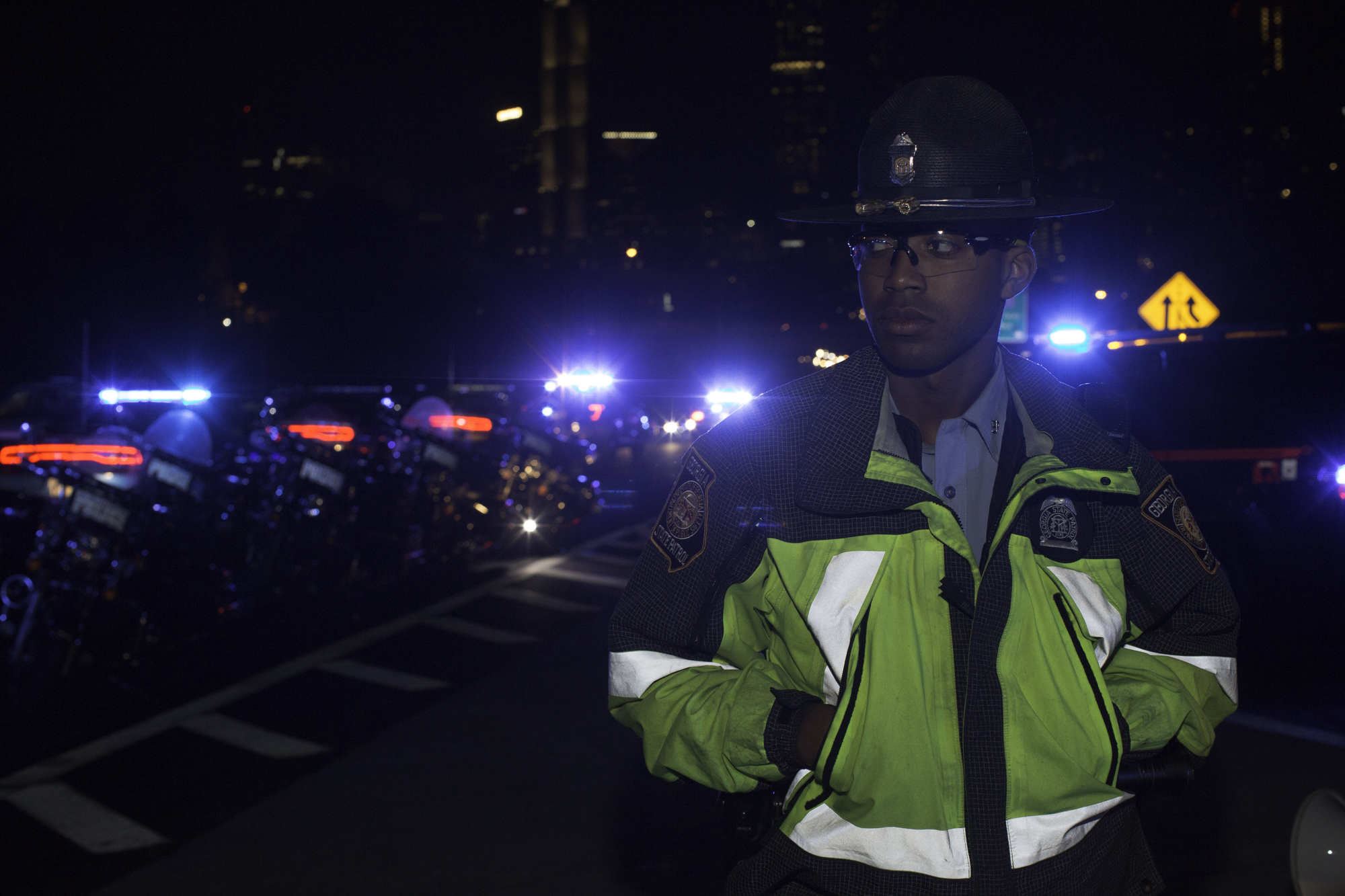 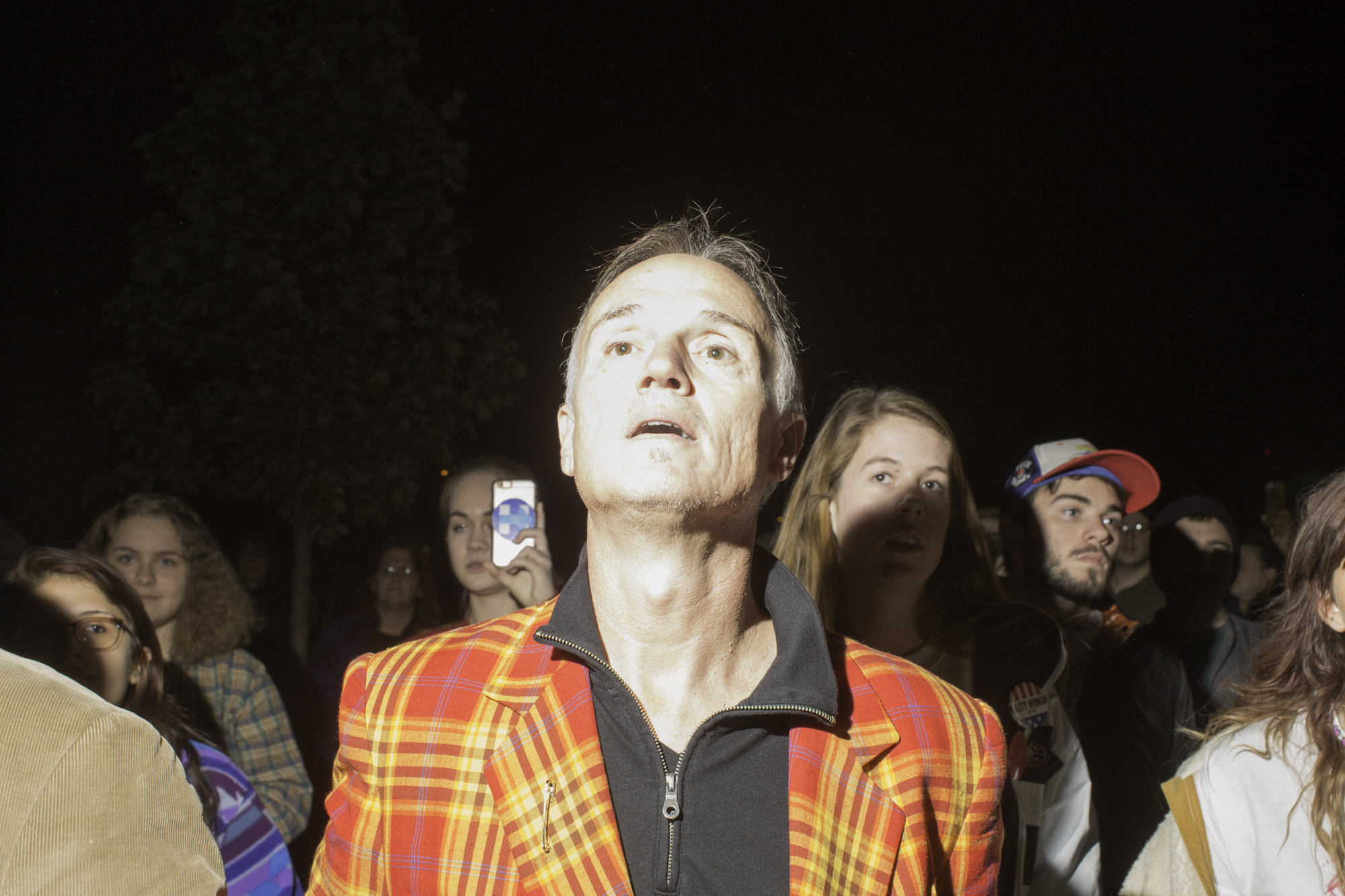 The crowd has shut down the street by the time some more cop cars start appearing, but those yelling “fuck you Trump” know their city, keeping ahead of the game. Two lanes of traffic are at a standstill.

I ask a passing officer what the plan is to deal with the disorder. While there’s police at all protests I head down to in the UK, I always notice that all the officers in America are armed. “Not sure yet,” the officer replies, “I expect we’ll let them carry on with it, the Mayor will have no interest in shutting them down.”

As we weave through the city, crowds come out from restaurants and bars, the pavements brimming with dancing and screaming supporters leaving their drinks and meals briefly behind.

A little while later we take a turning out of the city, “this way is the interstate, the cities busiest and most important highway,” a young guy says, looking at me, donning a particularly cheeky smile. 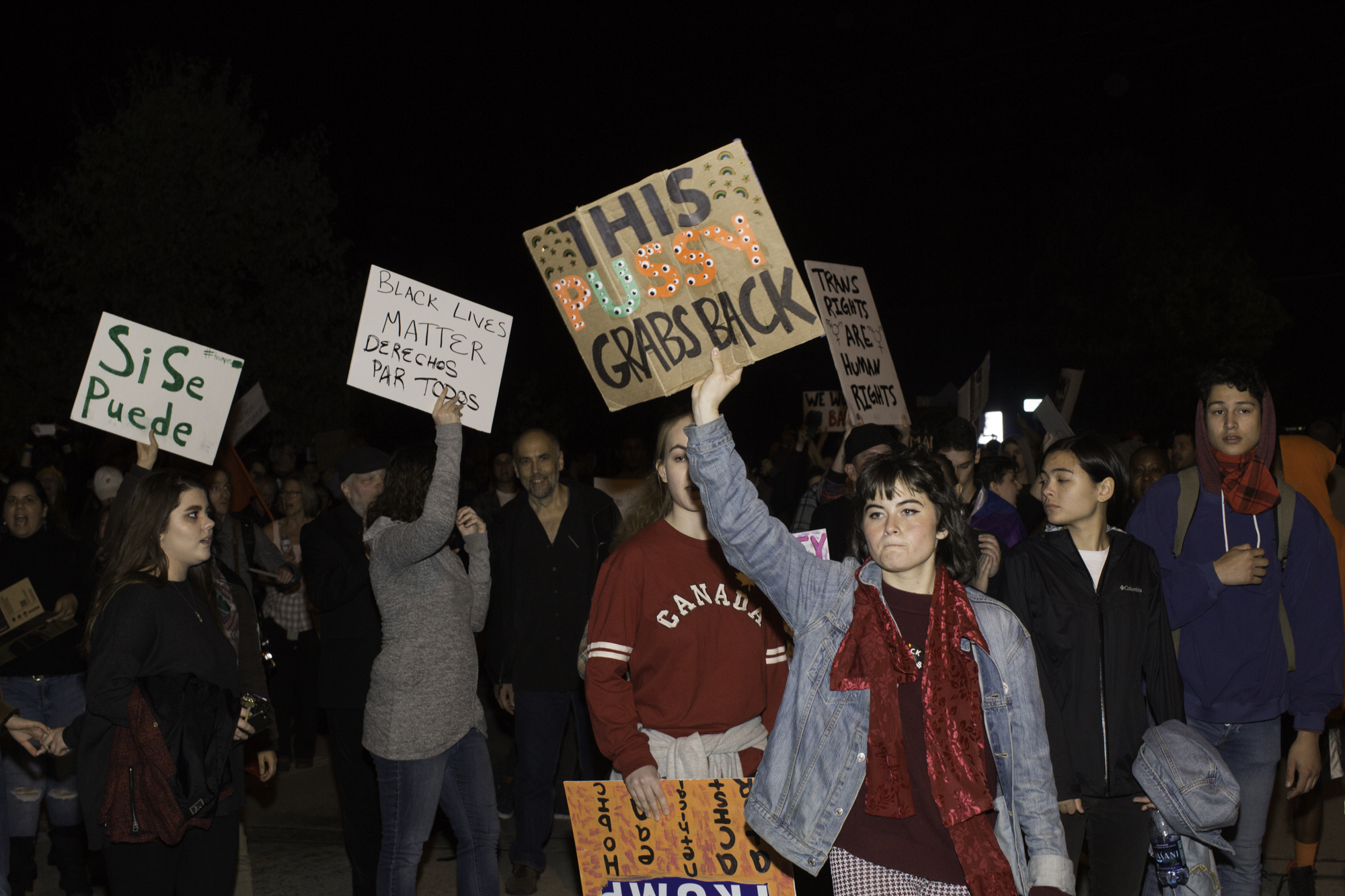 By the time we’ve walked the miles towards the junction that’s being aimed for, lines and lines of suited-up police officers are at the ramp, standing their ground. When groups like Black Lives Matter shut down these busy roadways, a city grinds to a halt. The cops might have been facilitating these protests until now, but here they draw the line.  A confrontation could spark, but the cops hold back.

Turning left, the group makes another go for the roadway, a splinter group beelines for some fencing. A group of fifty activists make a jump over some fencing to try and run down a grassy verge onto the highway, but the cops had already gotten there first. 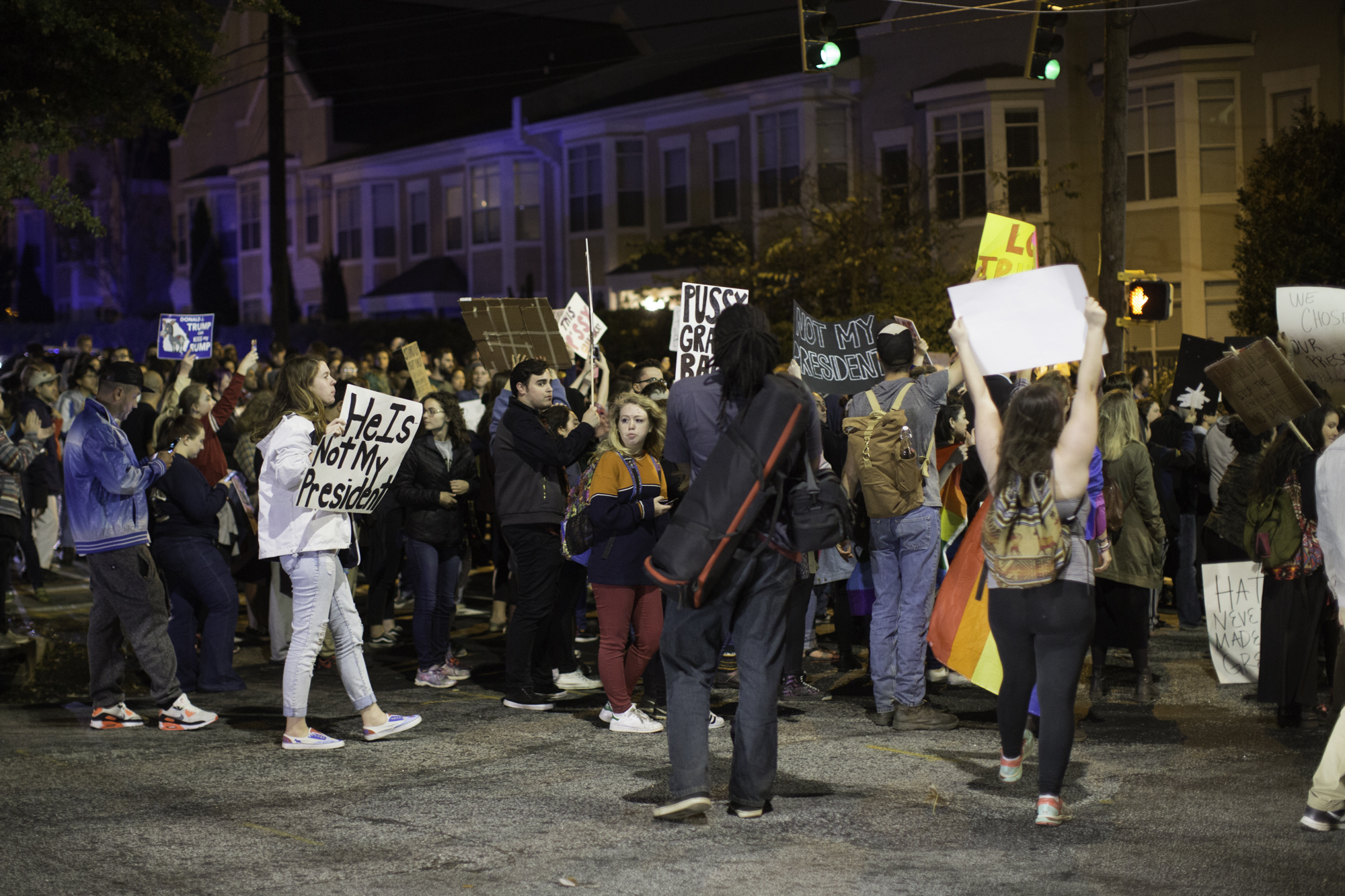 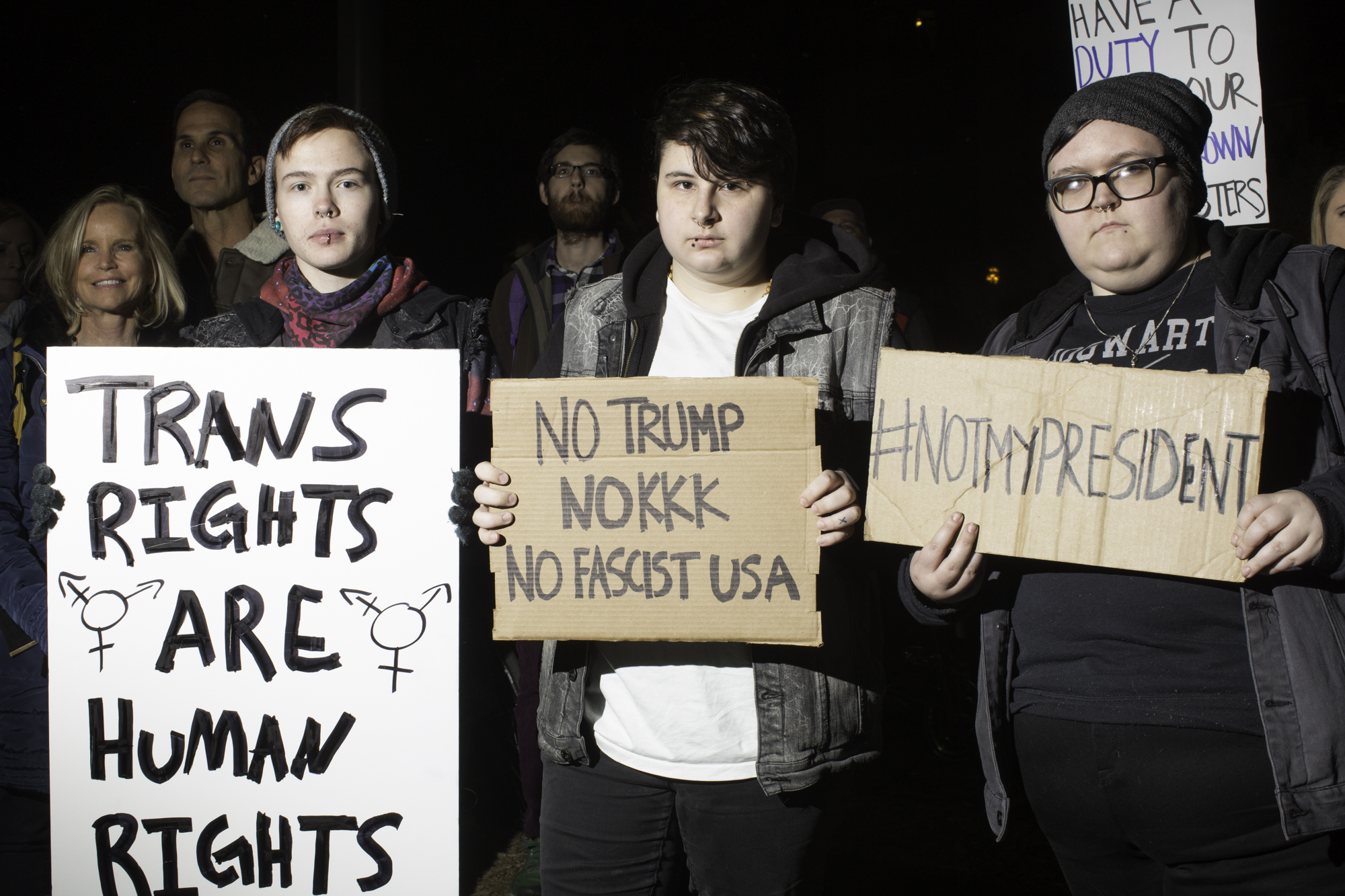 We’ve been walking and marching for hours now, covering a substantial amount of ground. The crowd heads off further eastwards, but I hang back, ready to turn around.

For protests like this to be more than a show of dissatisfaction, they’ll need to continue, and grow in size across the nation. With Trump’s tenure not due to begin until this year is over, it might well be the energy starts to wain before his ascendancy.

But even if these protests don’t lead to Trump’s downfall, they’ll still serve two distinct purposes. For those in the US who fear the next four years, these actions are a chance for group therapy, to stand together. And, for those set to come off worse should Trump fulfil his dangerous pledges, these are reminders that much of America stands with them.

Linkedin
RELATED ARTICLES
OTHER ARTICLES
The action took place in response to the 200 asylum-seeking children who were placed in hotels run by the Home Office who have gone missing.
Theo McInnes’s photos of the annual event provide an intriguing snapshot of contemporary Britain.
At his West Bank restaurant, Fadi Kattan established himself as the voice of modern Palestinian cuisine. Now, he’s bringing his innovative, bold flavours to the UK’s capital.
A new law change is enabling Britain’s donor-conceived children to know the truth about their origins – but campaigners say the fertility industry must do more to protect people.
Photographer Sean Maung reflects on documenting a small town in Pennsylvania afflicted by high levels of unemployment, poverty, violence, crime, and addiction.
Tristan O’Neill’s shots of dancers caught in moments of reverie at the height of rave’s golden age are a testament to the UK’s legendary club culture.