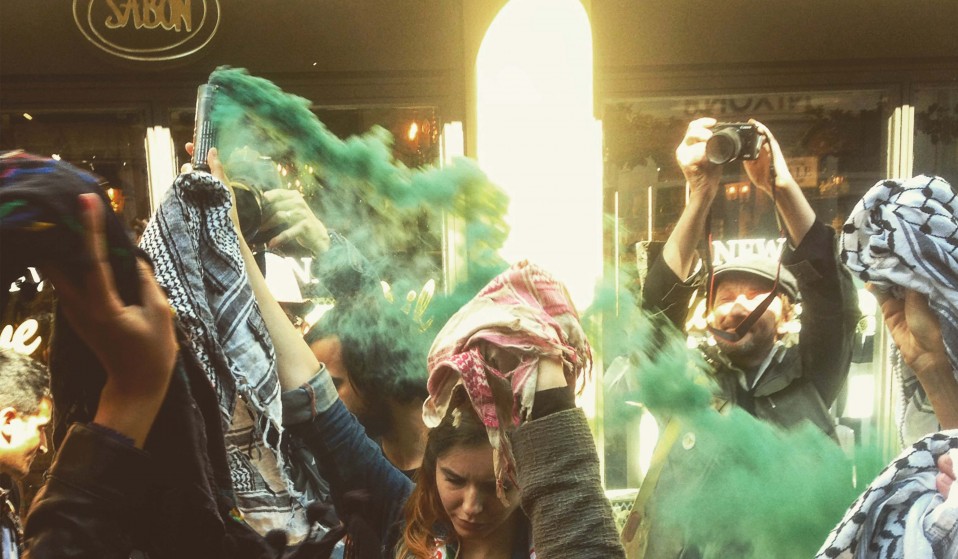 To commemorate the Nakba in 1948, in which Palestinians were forced from their homes to create Israel, activists protested Sabon, whose factory is built on former Palestinian villages.

On a sunny Sunday afternoon in central London, activists from London Palestine Action gathered in Soho Square Gardens to commemorate the 68th anniversary of the Nakba. LPA taught everyone who arrived some dabke steps, a Palestinian folk dance, before the group danced their way through Soho, to Sabon, the upmarket Israeli cosmetics store, in Covent Garden.

Inside the store they planned to read stories from the original round of Palestinian expulsions in 1948 – and subsequent forced removals, which continue to this day. But when they arrived, police had already shut the store and they were left in an uneasy stand-off with Zionist counter-protestors on the street outside.

The Nakba, or “Catastrophe” in Arabic, refers to the forced expulsion of hundreds of thousands of Palestinians from their homes after David Ben Gurion proclaimed the state of Israel on May 15, 1948. Expelled Palestinians were forced into the West Bank and Gaza or into refugee camps in neighbouring states such as Jordan, Syrian and Lebanon – or further afield.

“We’re commemorating the Nakba on this day,” said Sara Mohtaseb, of LPA, “and we’re here outside Sabon, which is quite a lovely store selling nice smelling soaps, because their factories are situated on land which used to be the Palestinian villages of al-Faluja and Iraq al-Manshiyya. In 1949, they were depopulated and ethnically cleansed. We’re saying it is not OK to profit from ethnic cleansing and it is not OK to sell your products in Britain, or anywhere else, when you’re profiting from that. There are people still suffering who are unable to return to that land.”

As pro-Palestinian activists sang and danced dabke outside the closed store and shared stories about how family members and others had been affected by forced expulsions, pro-Israeli counter-protestors tried to shout them down and waved Israeli flags behind their action. Other LPA activists explained to passersby about the Nakba and why they had chosen to target Sabon. The pro-Israelis told passersby that the LPA were Muslims trying to shut down Jewish businesses. 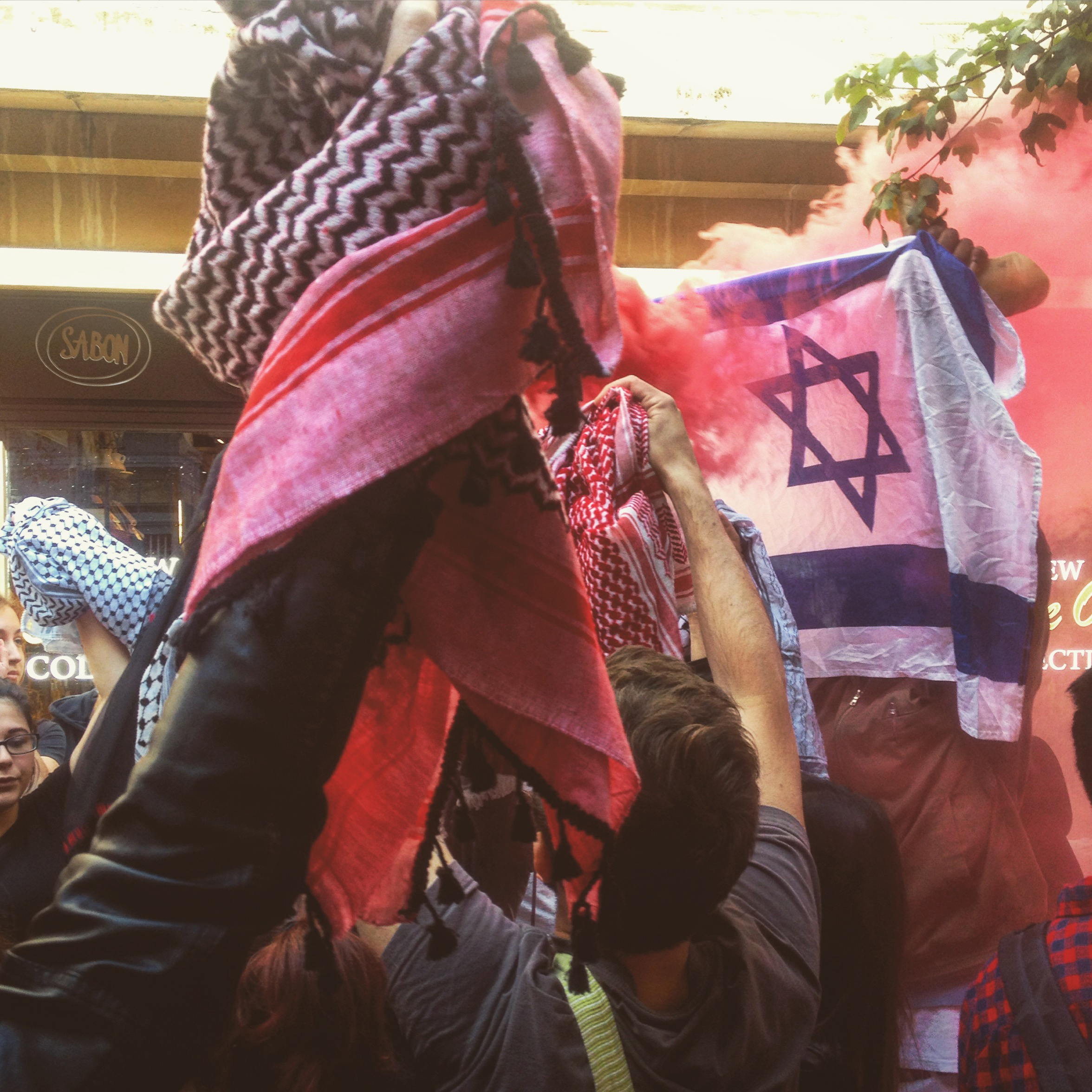 There is much that is contested in the Israel-Palestine conflict, but the events of the Nakba are well-documented. While many of the LPA activists have family connections to those forced from their land in Palestine, they were also joined by a number of Jewish Israeli supporters.

“In the case of Zionism and the Palestinians, it’s crystal clear who is the oppressor and who is the oppressed,” said Ronnie Barkan, one of the co-founders of Boycott From Within, a group that campaigns for BDS from within Israeli society. “Whether I like it or not, I’m amongst the privileged in this situation, by law. I have a responsibility to fight against this system of Apartheid. Israel was built exactly for that purpose, to give certain privileges to a select ethnic group, to which I belong.”

“The whole Israeli economy is profiting off of the backs of Palestinians, and peace isn’t profitable for Israel – they make more financial gain from subjugating and attacking Palestinians,” he continued. “In [the Boycott, Divestment and Sanctions movement], we focus on select companies that are complicit, and use our campaigns to educate people about the oppression and subjugation of Palestinians.”

It was a very emotional day of protest for lots of the LPA activists involved. “For many of us, it is a really tragic day to remember,” Sara explains. Her father was forced to flee Lydd aged four, after an Israeli massacre and threats their family would be next if they didn’t leave. Others shared similar stories.

Sara hopes their action will raise the profile of the Boycott Divestment Sanctions movement, one of the few ways international activists can put pressure on Israel and Israeli companies who profit from occupied land. “Also, it’s to say that on this day of the Nakba, this is our way of commemorating the ethnic cleansing and expulsions that occurred,” she explains, “and our way of trying to fight the ethnic cleansing that is ongoing.”

Linkedin
RELATED ARTICLES
OTHER ARTICLES
Photographer Phyllis Christopher recalls capturing sex and protest at a time when the city had become a haven for the queer community.
Following the release of his newly republished 1991 book, Redheads, the American photographer reflects on his celebration of ginger people and their magnetic power.
From the Yakuza to a biker gang, Bruce Gilden recounts capturing Tokyo and Osaka in the ‘90s.
Over the weekend, London locals came together to resist a pre-planned police raid targeting delivery drivers.
Following the release of his latest album God Don’t Make Mistakes, the rapper talks horror villains, police brutality and being unafraid to show his vulnerable side.
To mark the anniversary of the mass trespass of Kinder Scout, a group of hikers came together with the intent of creating a new, fully inclusive culture for rural spaces.