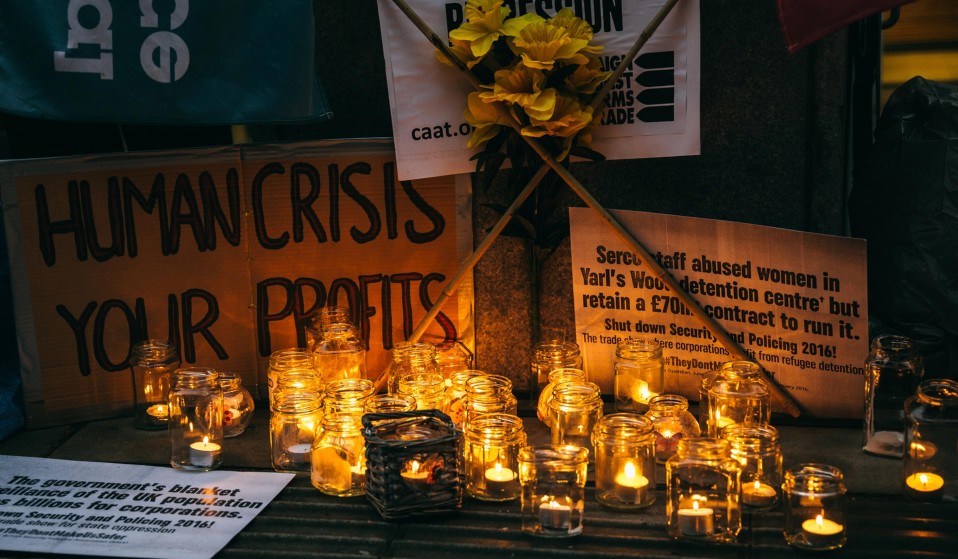 As a secret state-sponsored security exposition for international governments gets under way in Britain, Londoners braved the rain to protest, and remember the victims of state repression and violence around the globe.

Have you heard of the “Security and Policing” event that takes place every year in Britain? It’s no surprise that you haven’t, given it occurs in what the UK Home Office describe as a “discreet environment”. Every year, this governmental department invites an array of private defence companies to come together under one roof, from experts in tank bullets to manufacturers of the latest surveillance software.

As the Home Office states, “the event enables exhibitors to display products which would be too sensitive to show in a more open environment”. Their unique selling point, according to the website, is “the participation of UK government”.

This year a modest 359 exhibitors set up shop at venues around the quaint English town of Farnborough to showcase, demonstrate and sell their sensitive products. Law enforcement, border forces and other state agencies all received an invite to the occasion, although it’s not just an event for the Brits. The British state also invites foreign governments to take a look, with Saudi, Israeli, Bahraini and Qatari delegates all attending this year.

In London last night activists gathered in London to protest the event, unimpressed by the state sanctioned showcase of British misery-tech. On the penultimate day of the exposition, HUCK went down to meet the protestors outside the Home Office speaking out. 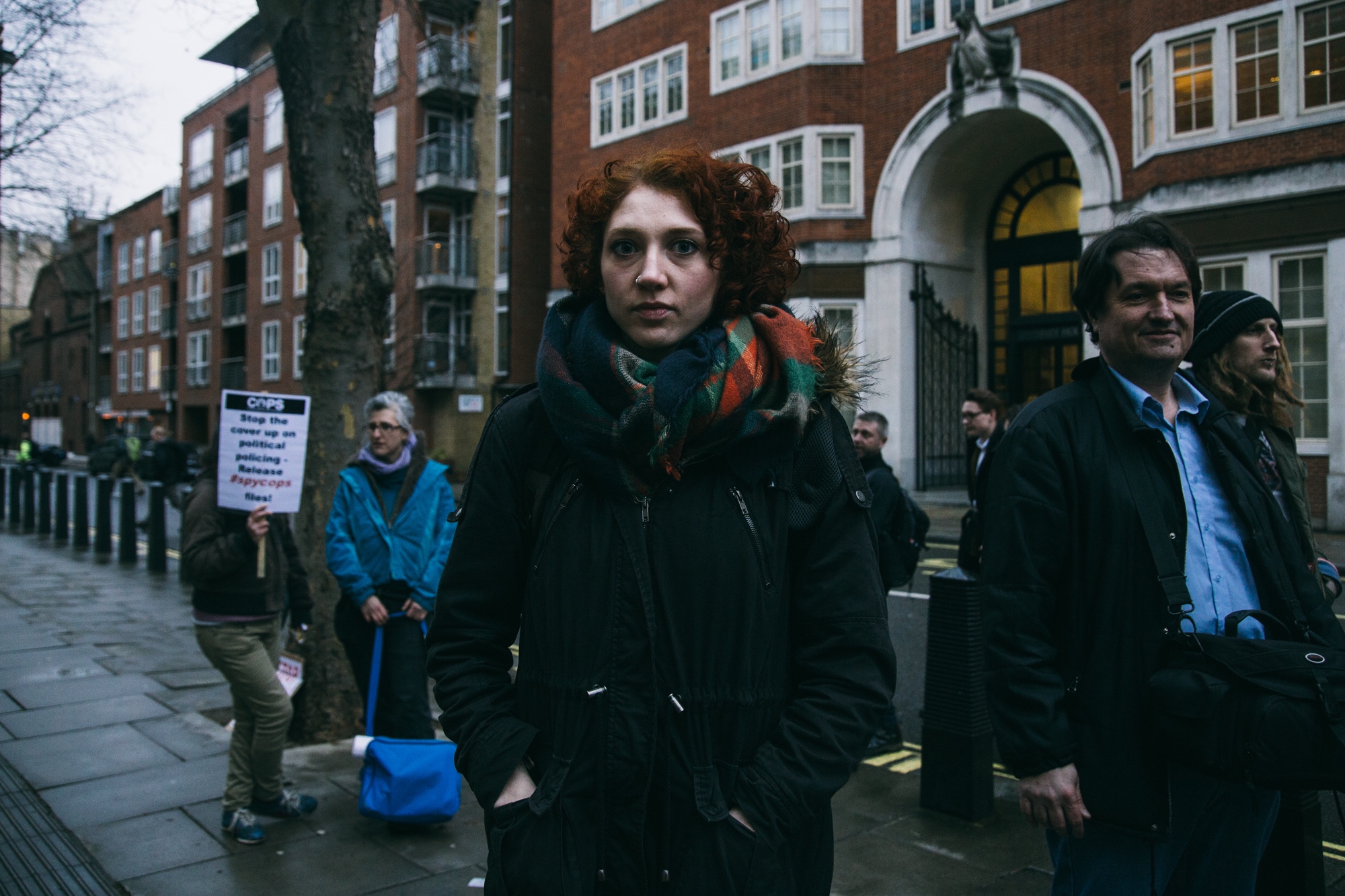 “The Security and Policing Fair is in reality a just lot of companies coming together who sell weapons, surveillance equipment, or who are involved in state repression and militarised policing. They meet in a private environment to sell their wares to buyers from around the world. On the invite list for this year, courtesy of the UK government, we’ve seen delegations from Saudi Arabia, Israel and Bahrain, and plenty of other places with a very very poor human rights record too. They’re invited to shop for equipment here in the UK. We’re here outside the Home Office to speak out for people who have been directly effected by these sales, people who have been on the sharp end of the weapons.” 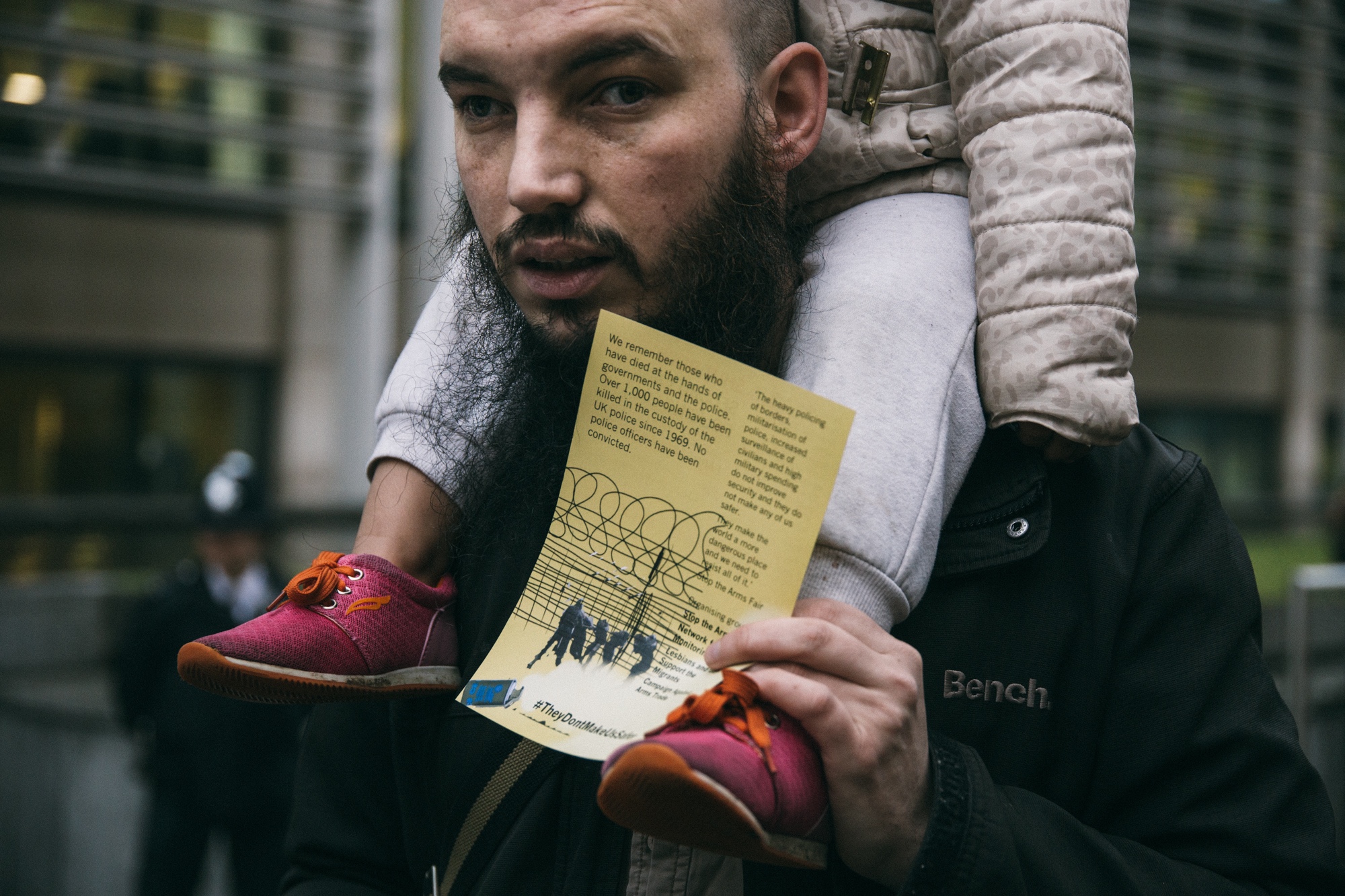 “In recent years we’ve seen the state policing through very violent and aggressive means, with little to no accountability. I myself was held on the basis of secret courts and secret evidence in the United Kingdom for two years. I spent 18 months under house arrest and I just couldn’t take it anymore, so I went on the run. There was a massive 600 person manhunt to look for me. I handed my self in after five weeks, and held on remand until a trial.”There was no charge at first. The charge they ended up bringing was for breaching a control order which was based on unknown accusations in the first place. While i was in prison I was asked what I was there for? I’d say I honestly don’t know. In the end I was found innocent. This isn’t something you expect to hear about in Britain, the alleged home of freedom and democracy. This move towards more secrecy and less accountability is endemic here right now.” 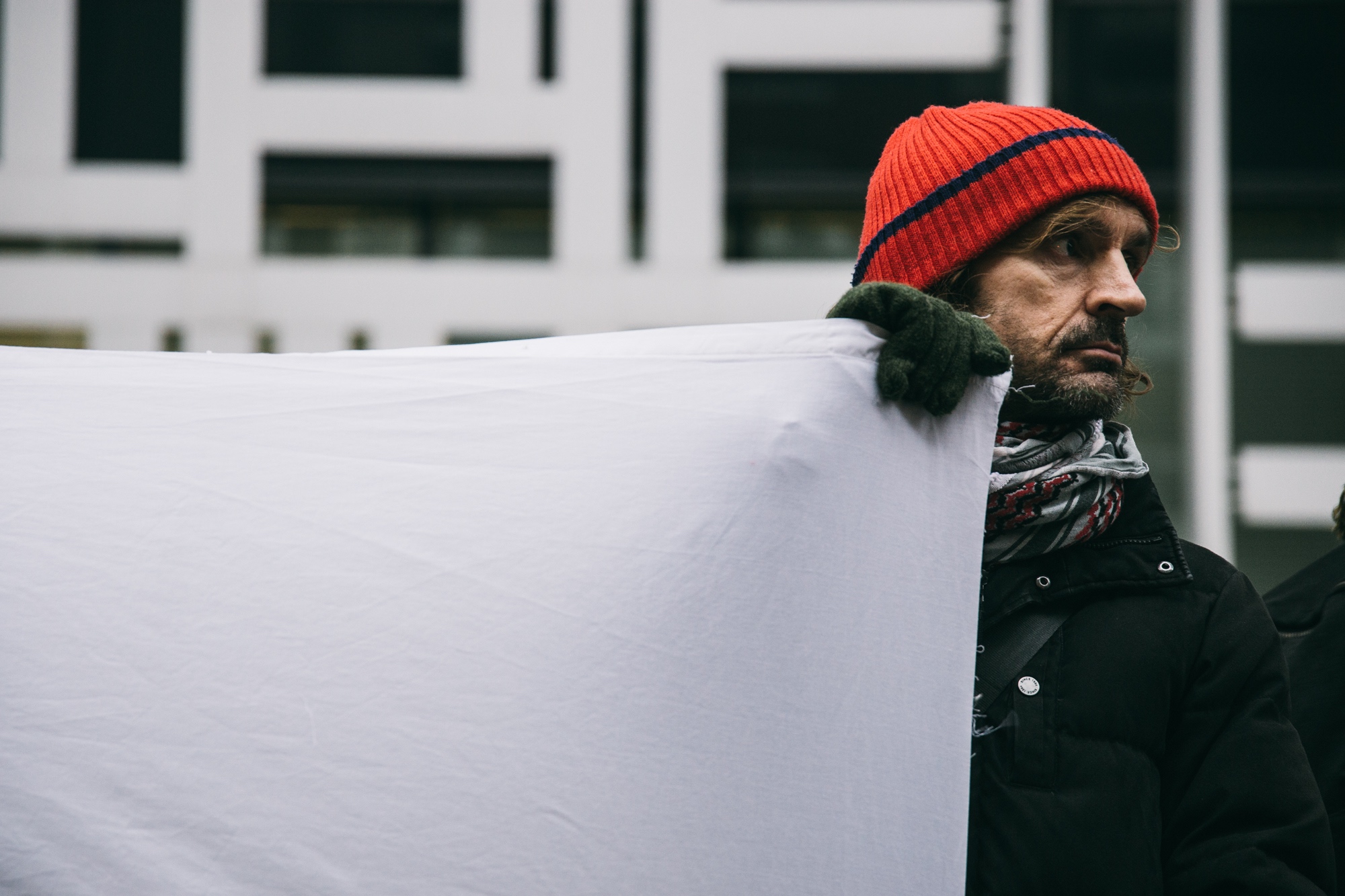 “At the vigil I spoke a little about two friends I have in Israeli prisons at the moment, two Palestinian men. One, Gassan Najar, has has been in prison for almost a year, without facing any trial or charge. He’s from a village called Battir in the West Bank where he’s an organiser, building a youth centre. That’s why he’s in prison. The other has been inside for four months, again no trial or charge. His name is Weil Faqui, he run’s a cultural centre in the West Bank, supposedly that’s his crime.I’ve seen the inside of an Israeli prison, I’ve worn British made handcuffs and British made leg shackles, no doubt acquired at fairs just like the one taking place today. It’s not right.” 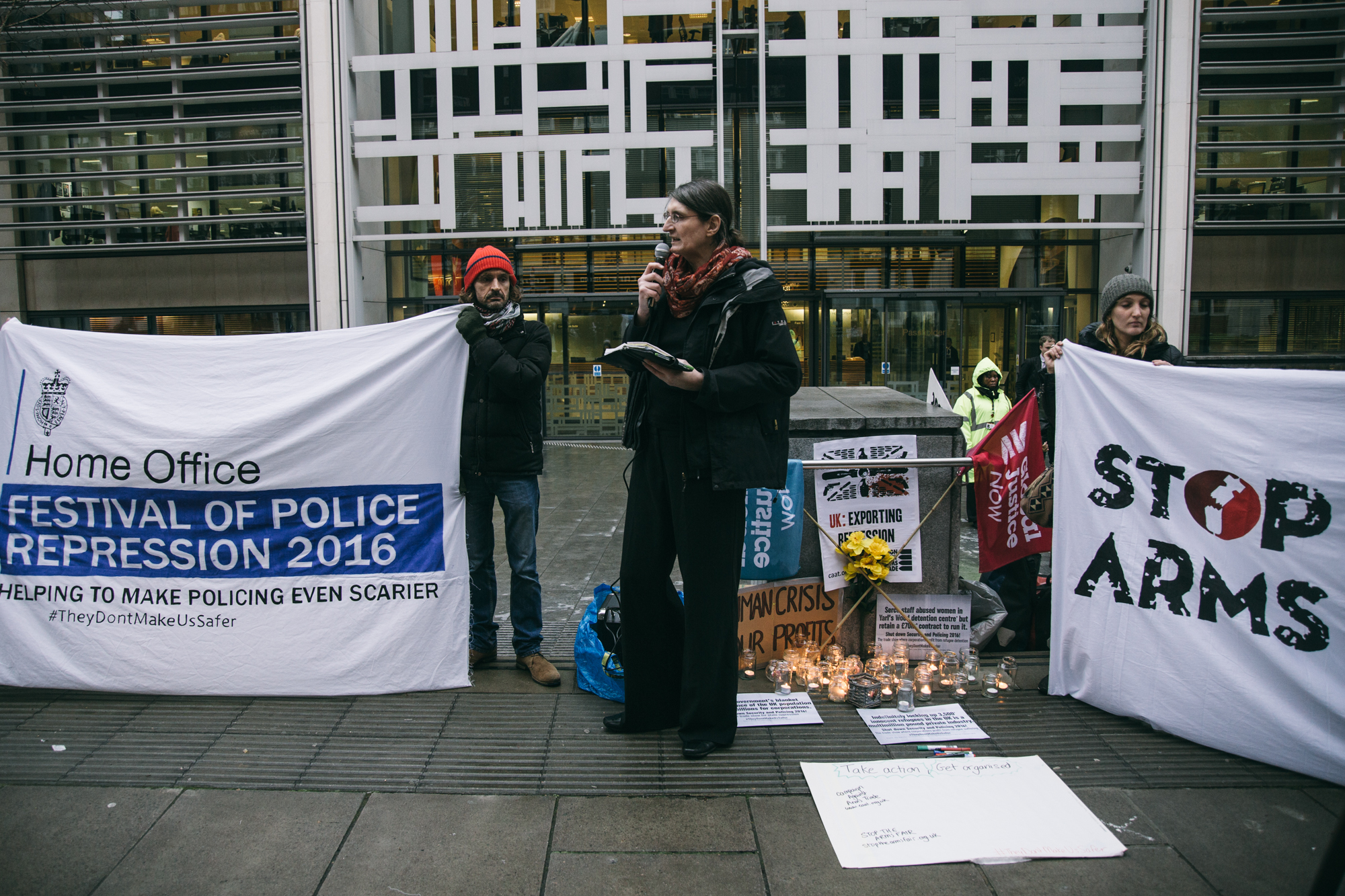 “A group of us got together about a month ago, and started to look into the Security and Policing event. We decided we were going to organise a protest. I listed names at the vigil like Ian Tomlinson, who was killed by the police in 2009. I have friends involved in animal rights activism who have been hugely targeted by the police and security services for their roles in peaceful and lawful demonstrations.”

Linkedin
RELATED ARTICLES
OTHER ARTICLES
A new report highlights how conditions faced by those seeking refuge in Britain "fundamentally lacked decency".
It took Thomas Morris three years to write the book of his dreams. Then he scrapped it, sat down, and wrote the truth.
After the release of their debut LP last week, we talked to Philadelphia/LA duo Girlpool about the desire for new scenery and the need for constant change.
A resurgent Conservative government in power has a new generation looking for its sound of opposition. Who will take on the role the Smiths, the Clash and Billy Bragg played in the Thatcher era?
In a new era of global activism, are celebrity leaders a thing of the past?
Share the spots that inspire you to ride with O'Neill's #RideMore Tumblr.